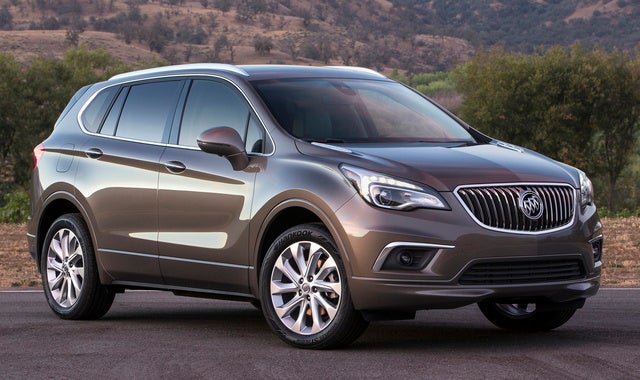 Average user score
5 ⁄ 5 stars
Based on 10 reviews
Review by Guru7PDLP — Seems to be an overall quality vehicle. But not sure it lives up to its hype of an equal alternative to BMW, Mercedes, Volvo, etc. Read more

Until its Envision debuted for the 2016 model year, Buick skirted the heart of the crossover market. The city-size Encore is a tight fit for a growing family, while the full-size Enclave is simply too much vehicle for many buyers. With the Envision, however, Buick has gained focus.

There’s a lot of story to tell with the Envision, not the least of which is its birthplace. It is the first full-line model to be built in China and exported to the United States (technically, a very specific trim level of the Volvo S60 was sourced from China first), a move that may ruffle some feathers but really illustrates how global General Motors’ Buick division has become. Today, Buick derives most of its worldwide sales from China, and even its North American product range was largely developed in Asia or Europe.

As for the Envision, it's a 5-passenger premium crossover designed to square off against the BMW X3, Mercedes-Benz GLC-Class, and Acura RDX. The entry-level Envision may undercut those three on price but is otherwise a highly competitive luxury crossover.

Anchoring the entry-level end of the lineup is a 2.5-liter 4-cylinder rated at 197 hp and 193 lb-ft of torque. A 2.0-liter turbocharged 4-cylinder, meanwhile, ups the ante with 252 hp and 260 lb-ft of torque. Envisions with the turbo motor are only offered with all-wheel drive (AWD), while the 2.5-liter is available with either front- (FWD) or all-wheel drive, depending on trim level. Either way, a 6-speed automatic transmission is the only gearbox on offer.

Standard regardless of powertrain is Buick’s HiPer Strut front suspension, which is designed to improve traction and handling under full-throttle situations. Snow-belters will appreciate the optional AWD, which utilizes a twin-clutch setup to more rapidly transfer power to the rear of the car when slip is detected. While the Envision is certainly not meant to be an off-roader, it can handle a good snowfall.

Equipment is generous, even on the base trim, which includes heated cloth-covered front seats, automatic climate control, a backup camera, and a remote starter. A host of trim levels add more content—think leather trim for the seats, a moonroof, navigation, an upgraded audio system, and a blind-spot monitor.

The range-topping Premium II, meanwhile, lavishes extras like heated and ventilated leather seats, a system that will parallel park the vehicle autonomously at the press of a button, and a larger LCD screen in the instrument cluster.

Envisions include a high-resolution touchscreen for audio and infotainment controls. Apple CarPlay and Android Auto are included as standard, while a fully integrated navigation system is a modestly priced optional extra.

On the safety front, the Envision is available with a host of camera and radar-based collision avoidance technologies. The optional Surround Vision system utilizes cameras all around the vehicle to give a virtual 360-degree view via the infotainment screen to help drivers avoid nearby obstacles. At higher speeds, a Safety Alert Seat pulses the driver’s seat base if it detects the Envision is either drifting into another lane or about to collide with another vehicle. Additionally, an available full collision-avoidance system will bring the crossover to a halt in order to prevent or mitigate the severity of an impact.

One thing to note is that the full collision-avoidance technology comes standard with the turbo but is not offered on the 2.5-liter trim.

Like other GM products, Envision offers the automaker’s OnStar system with 4G connectivity. Although the services require an additional fee after an initial trial period, they can provide safety and concierge services at the press of a button and make the vehicle into a full Wi-Fi hotspot.

What's your take on the 2017 Buick Envision?

TheHorror Have an electronic device? How would you feel if it was vandalized?

cooper_2225 I was looking at the Envision until I read it was produced in China. No longer interested.

GuruBRZZ Drove it loved it, till I learned it was made in China

Frank Oh yes, go to the new Trump hotel in Washington DC and you will find that the towels, bathrobes, and even soaps are all imported from China. How phony! I am buying the Envision because it's a great car.

GuruDHB97 I leased a 2017 Envision Turbo AWD and I love the vehicle. It handles great with excellent road holding capabilities. I also own a 2015 Buick GS AWD and the Envision reminds me of how my GS handles. Does not matter in this day and age where a car is assembled as parts generally come from all over the world.

GuruYRVN1 I purchased my 2017 silver Envision FWD with the panorama roof as a demonstrator. The car is absolutely solid on the highway, excellent handling, good pick up and totally reliable. Many convenient features, beautiful dashboard, flexible seating in the back and an unexpected storage compartment under the floor of the storage area. No complaints. Always serviced by the local Buick dealer.

Have you driven a 2017 Buick Envision?
Rank This Car

What Is The Normal Temp Coolant? Is 190 Too High

120 views with 2 answers (last answer about a year ago)

For Two Days Westborough GMC Had A Vehicle Listed At $30302

I printed out the listing & saved the listing @$30302 This morning I went online in my saved listing now @$37989 This is after I contacted the dealer the price changed Yesterday the Dealer Quoted me ...