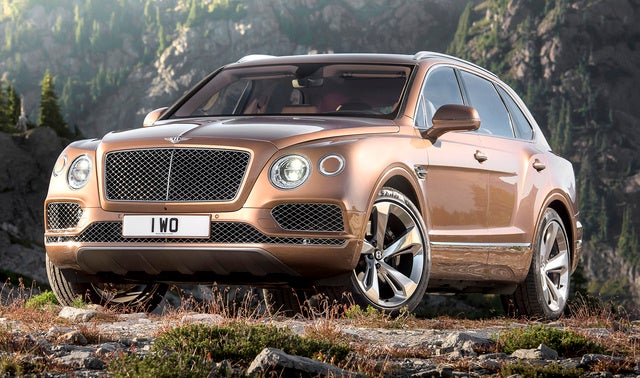 Looking for a Used Bentayga in your area? 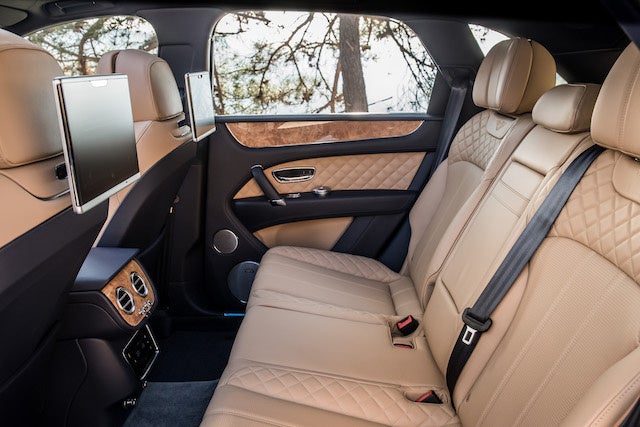 As ever more car brands expand into all manner of new crossover and SUV segments, automakers that were once relegated to very specific vehicle types are now venturing into uncharted terrain. We've seen hybrid supercars, luxury pickups, and all manner of CUVs. And with this explosive proliferation into new markets comes the Bentley Bentayga SUV.

The Bentayga is the first official mass-produced SUV from Bentley. We say “official” and “mass-produced” because the British automaker once produced a very limited-run SUV called the Dominator. It was heavily based on the Land Rover Range Rover, and was commissioned for the Sultan of Brunei. Although you’ll probably never even get a glimpse of the ultra-rare Dominator, don’t fret, as anyone who steps behind the wheel of a Bentayga will be driving the “fastest, most powerful,” SUV in the world. Bentley has taken the first move in what is said to be a coming surge of ultra-luxury SUVs, including offerings from Jaguar, Maserati, and even Lamborghini.

The name Bentayga is supposed to be a combination of "Bentley" and "Taiga," the world’s largest intercontinental snow forest, spanning much of both Russia and Canada.

The Bentayga's design is unmistakably Bentley and perhaps even predictably so. This is a welcome aesthetic given that the Bentayga’s concept counterpart, the EXP 9 F concept, was rather jarring in some respects. The front has the circular headlights and bulbous proportions that you would find in the Bentley Continental GT, and the rear has a sharply raked profile that gives it a decidedly “quick” look. It actually shares a platform with the Audi Q7 and A8, though you’d never be able to tell by looking at it.

Any new Bentley will turn heads when it pulls up at a stop light, but the Bentayga is an absolute showstopper, particularly when it comes to the cabin. Contemporary automakers like Jaguar have been forced to completely embrace a new, futuristic aesthetic, but Bentley manages to wonderfully marry the old to the new. The cabin features ample leather, soft touch materials, wood appointments, brightwork accents, and some of the most impressive upholstery cross-stitching on the market. Interior swatches include khaki and woodgrain, or even black leather with piano black accents that give off a tuxedo look.

This timeless approach to luxury is complemented by modern high-tech features such as the large center-console touchscreen and customizable digital in-dash display. The center touchscreen is 8 inches wide and features gesture control, meaning you can operate some functions simply by waving your hand in front of the screen rather than touching it.

The infotainment system features a 60 GB hard drive with 11 GB alone dedicated to music storage. There is also a pair of USB ports, standard Bluetooth hands free calling, and 4G WiFi hotspot capability. The rear seat entertainment system features a pair of digital tablets that run on Android software, and the whole car is treated to a 6-channel, 10-speaker premium sound system that can be upgraded to either a 12-speaker system or the incredible “Naim for Bentley” premium stereo with 19 speakers.

The driver is assisted by safety technologies like a head-up display, night vision, park assist, and even a system that recognizes road signs.

The Bentley Bentayga features a turbocharged 6.0-liter W12-cylinder engine, which is effectively a pair of V6s mated to one another. This engine makes 600 hp and 664 lb-ft of torque, routed through an 8-speed automatic transmission to full-time 4-wheel drive (4WD). The Torsen center differential splits 60 percent power to the rear wheels and 40 percent to the front. You can also opt for an available All-Terrain Pack that adds four off-road drive modes, protective skid-plates, and a sump camera that lets you view the area immediately in front of the vehicle.

The W12 powertrain will propel the Bentayga from 0 to 60 mph in just 4.0 seconds and reach a top speed of 187 mph. No official word yet on fuel economy, but based on the European Union test cycle estimates, the Bentayga should return about 18 mpg combined.

If you feel that you do not need the full rush of 600 hp, Bentley will offer a V8 version of the Bentayga down the line. It has also been confirmed that a plug-in hybrid version will be released in 2017, which would be Bentley’s first-ever plug-in hybrid.

Base MSRP for the 2016 Bentley Bentayga is $299,100 before tax, delivery, or any options. A total of 608 units will be made for the SUV's first edition, and just 75 of those early edition models will make it to the US. Overall, it is expected that Bentley will build 3,000 to 4,000 Bentayga models per year. No word on how many of those will make their way to the US.

The Bentley Bentayga takes the timeless styling, stunning interiors, and thrilling performance that the British automaker has been known for and crafts it on to an imposing SUV frame. The result is a vehicle that is even more dramatic than the Bentleys that have come before it, and, for the time being, is the fastest SUV in the world.

What's your take on the 2017 Bentley Bentayga?

JayDawg Awesome is the first word that comes to mind! An impeccably crafted vehicle for the ages and a welcome addition to the Bentley lineup.The Bentayga takes the SUV genre to uncharted levels of sophistication!!

TheHorror Did you copy that from a VAG press release, JayDawg?

Have you driven a 2017 Bentley Bentayga?
Rank This Car

Looking for a Used Bentayga in your area?