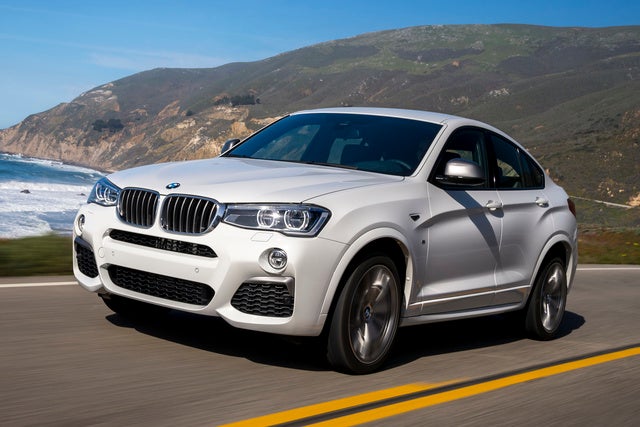 It could be described as a compact luxury SUV, but that doesn’t feel quite right, which is probably why BMW calls it an SAV - Sport Activity Coupe. And “Activity” does feel like a more accurate descriptor for the 2017 BMW X4, especially when you consider just how active - and athletic - the X4 M40i can be, not to mention what the sloping roofline does to the vehicle’s utility.

The X4 shares most of its engineering and parts with BMW’s X3, which looks like a traditional compact luxury SUV. The difference is obvious - the X4 has the sloping roof that leads BMW to call it a coupe. It’s a unique look, one that will surely mesmerize and entice some consumers. But the roof does compromise utility - the X4 has 17.7 cubic feet of storage behind the rear seats (the X3 has 27.6) and 49.4 cubic feet of space with the rear seats folded flat (the X3 has 63.3).

The M40i trim was introduced in the middle of last year (it replaced the xDrive35i trim), so although that change did happen before this year, it’s still a noteworthy addition to the X4 lineup. There are very few changes for the 2017 year otherwise - there’s now available wireless phone charging and a Wi-Fi hotspot; the iDriver multimedia interface that comes with navigation has been updated; and the M Sport package steering wheel has been redesigned.

The X4 xDrive28i comes with a 2.0-liter turbocharged 4-cylinder engine that generates 240 hp and 260 lb-ft of torque. The engine, a staple of the BMW stable, is mated to an 8-speed automatic transmission and sends power to all four wheels with BMW’s highly regarded xDrive all-wheel-drive (AWD) system. It can push the xDrive28i from 0-60 mph in 6.3 seconds and gets 20 mpg city/28 highway/23 combined.

The xDrive28i is plenty quick for most drivers - that four banger does more than seems possible - and handles superbly. But if you’re looking for a true performance vehicle beneath that intriguing roofline, the M40i is the way to go.

The M40i’s transmission, AWD system, suspension, and steering all get special, sportier tuning. The exhaust system is also sport-tuned, and it comes with a resonator so you can enjoy the seductive rumble of the I6 inside the cabin. It handles corners and hugs the road like you’d expect a sporty BMW to - with aplomb. The only comparison in the segment, as far as performance goes, is the Porsche Macan.

The X4's cabin also has the elegance you’d expect of a BMW - high-quality materials, superb craftsmanship, and a tasteful, ergonomic design. There is ample head and leg room in the front, which has a sporty, cockpit feel to it. The rear, with its contoured bucket seats, is definitely best for just a pair of passengers. Head room in the rear is, of course, compromised a touch by the sloping roof.

Standard features for the the xDrive28i include adaptive xenon headlights, LED running lights, a sunroof, power-folding and auto-dimming mirrors, dual-zone climate control, 8-way power front seats, paddle shifters, Bluetooth phone and audio connectivity, BMW Assist emergency telematics, and a 9-speaker sound system with a USB port and auxiliary jack. The M40i adds all of the performance upgrades, front parking sensors, 20-inch wheels, a Harman Kardon sound system, and other upgrades that can be found in the M Sport and Premium packages available for the xDrive28i.

GuruZKCDV I love my BMW X4 2015, BUT, I WISH I HAD OF RESEARCHED MORE. THE JAG, MERCEDES, ALPHA ROMERO REPAIR RECORD IS BETTER, MORE AFFORDABLE

29 views with 3 answers (last answer about a year ago)