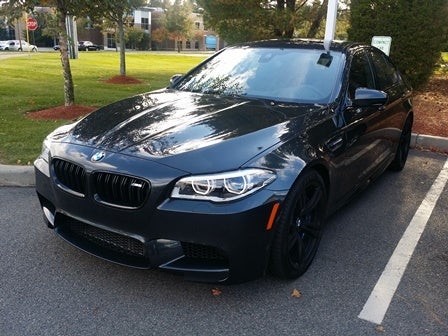 With an all-new, next-generation BMW M5 expected to debut later in 2017 for the 2018 model year, the current version ends its run as the final vehicles roll off the production line in Germany. Even though it's now at the tail end of its fifth generation, which kicked off in 2012, the venerable German midsize sports sedan continues to set the pace in its high-powered market segment—as it's done since its introduction over 30 years ago. Granted, it's been showing its age lately, especially when facing off against newer, jazzier competitors, but the 2017 M5 remains a formidable 4-door daily driver that still delivers plenty of potent, track-inspired performance. It can feel a bit heavy when maneuvering in traffic or tight spaces, but on the open road it's a beast of a machine, putting out a whopping 560 hp and 500 lb-ft of torque—thanks to its twin-turbo 4.4-liter V8 powerplant—and making the jaunt from 0-to-60 in a noteworthy 4.2 seconds. Those numbers alone, not to mention its upgraded M equipment and features, make it worthy of attention, even with a new-generation replacement on the way.

When it debuts, the sixth-generation M5 (code-named the F90) will borrow the most of its styling and features from the recently updated 5 Series and some design elements and technology from the 7 Series. According to early reports, the new M5 will ride on an updated platform with an available all-wheel-drive (AWD) system designed with a rear-wheel bias for performance motoring. Drivers will have the option of switching to rear-wheel-drive (RWD)-only operation at the touch of a button. In its standard configuration, however, the car will remain a RWD vehicle.

The new M5 is expected to be lighter than the current generation, due in part to the use of lightweight materials like carbon-fiber-reinforced plastic for some body panels and components. It will also be faster and more powerful than the current generation thanks to an updated twin-turbo V8, which is expected to deliver between 600 and 620 hp and a 0-to-60 time of around 3.6 seconds. Cabin technology, driver-assistance systems, and safety features will be upgraded, as well.

Until then, the current M5 remains available for buyers seeking a dedicated RWD sports sedan with plenty to offer and a storied history of awards, performance, and achievement. As a hand-built product of BMW's motorsports-oriented M division, it comes equipped with a number of M-specific components, starting with its M chassis and suspension that feature an Active M rear-axle limited-slip differential. Working with the car's Dynamic Stability Control system, the differential shifts torque from side to side, providing optimal traction and stability in all types of driving situations. Also standard are reinforced mountings, M Dynamic dampers, and 3 different drive modes—Comfort, Sport, and Sport Plus—that allow drivers to adjust the firmness of the ride. Variable-assist M Servotronic power steering ensures precise handling at all speeds, while M Compound ventilated antilock brakes with blue-painted calipers provide reliable stopping power. The M5 also comes equipped with standard 19-inch light alloy wheels with performance tires for superior road grip and stability.

The M5's 560-hp twin-turbo V8, which it shares with the M6 convertible and the X5 M and X6 M crossovers, links to an M-specific 7-speed double-clutch transmission, tuned to handle high torque loads. BMW also makes a 6-speed manual transmission available for buyers who prefer a sportier driving experience. The V8 requires premium fuel, and top speed remains 155 mph. Fuel-economy numbers stand at 14 mpg city, 20 highway, and 16 combined with the automatic transmission and 15, 22, and 17 with the manual.

Needless to say, with its high-powered twin-turbo V8, upgraded suspension, and M-specific mechanics, the M5 can deliver just about anything you ask of it—and then some. It never feels overtaxed or struggles to perform when pushed, remaining stable and capable under even the most aggressive maneuvers. Features like Launch Control maximize acceleration and engine output, and all control systems monitor and manage the car's performance without getting in the way of its sporty ride. The M5 was built to be driven hard, and it never comes up short.

The M5's smooth, fluid exterior and unadorned front end might seem a little too laid back in an era where vehicles proudly sport sharp side creases and jutting front ends reminiscent of Darth Vader's helmet. Still, the exterior design is far from unpleasant, and it serves to somewhat mask the power and technology just under its skin. Again, M-specific components like an M rear spoiler and M quad tailpipes lead the list of standard features. Up front, the dual-kidney grille gets M-design vertical black double slats, while a large central air scoop and black-screened lower air intakes make a bold statement. High-intensity discharge (HID) auto-leveling headlights, heated power-adjustable auto-dimming side mirrors, and L-shaped LED taillights are also included.

The 2017 M5 continues to come in a single trim, and as expected of a German-made sports sedan with a price tag approaching six figures, it's equipped with just about every feature imaginable. Standard M-specific items inside the driver-oriented cabin include an M instrument cluster, a 3-spoke leather-wrapped M sport steering wheel with paddle shifters, M door sills, and 20-way power-adjustable front M sport seats with side bolsters, 3-stage heating, and memory settings. The M5 boasts Merino leather upholstery, an engine start/stop button, automatic climate control, and a powered glass moonroof, and tech equipment includes a navigation system with a 10.2-inch screen, a reversing camera, and a 16-speaker Harman Kardon Surround Sound system with HD and satellite radio.

Finally, buyers who seek even more power and performance can outfit their M5 with the Competition package, which boosts engine output to 575 hp and edges the M5 closer to a motorsports racer with features like a revised suspension, a 10mm-lower ride height, and a modified M Dynamic Mode. The package also adds an adjusted steering ratio for more direct response, a modified exhaust system with a unique engine note, black-chrome dual sport tailpipes, and exclusive 20-inch wheels. Of course, it doesn't include AWD, but it does equip the M5 with just about everything else a driving enthusiast could possibly want.