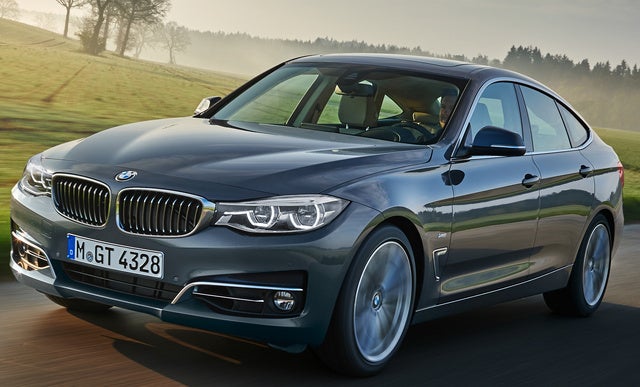 While largely related to the normal 3 Series, the BMW 3 Series Gran Turismo (GT) is marketed as a separate model for the most part, having been introduced in 2013. While it’s called a GT, it’s basically a larger hatchback version of the 3 Series, almost like a fancier Honda Accord Crosstour. The GT has a longer wheelbase than the normal 3 Series, and it's both taller and wider as well. For 2017, the 3 Series GT doesn’t look much different up top, but there are significant changes under the hood that have resulted in new trim names: the 330i xDrive, at $43,650, and the 340i xDrive, at $49,350. New 19-inch wheels are available, while matte-chrome exterior trim and LED headlights are now standard.

BMW’s new modular engine architecture includes a 2.0-liter turbo 4-cylinder (B46) and a 3.0-liter turbo straight-six (B58). The four goes into the 330i, formerly known as the 328i, and makes 248 hp, up from 240 in the old car. The six in the 340i, meanwhile, makes 320 hp, compared to 300 hp in the 335i that it replaces. Expect fuel economy to be in the low 20s for city driving and low 30s on the highway. Automatic stop/start also comes on the 3 Series GT but can be disabled. The Gran Turismo comes only with BMW’s xDrive all-wheel drive and the only available transmission is an 8-speed automatic, placing this car firmly in the luxury camp rather than on BMW’s sporty side.

Steering is by electric power assist, and the 3 Series GT can be had with an Adaptive M suspension that is set 10mm lower and allows the driver to adjust ride and handling with Comfort, Sport, and Sport+ modes, along with adjustments to the Dynamic Traction Control. The GT also features an active rear spoiler that comes on at highway speed to improve stability, but the spoiler can also be operated via a button on the driver's-side door.

One of the biggest things that distinguishes the 3 Series GT from the normal car is its size. Its stretched wheelbase makes the back seat considerably larger, and passengers sit two inches higher. Rear-seat legroom is apparently even greater than in the 5 Series, and the rear-seat backrest is power-adjustable and can be folded down. The liftback trunk lid in the back makes it easier to load larger items, and more of them. The back shelf can be split in two, with a rear section that automatically opens/closes whenever the tailgate does so but can also be removed and stored below the luggage compartment floor when you need to carry bulky items. As with the larger X6, however, that sloping roof line cuts down on rear headroom as well as cargo capacity, although the 3 Series GT still offers 56.5 cubic feet of cargo space with the rear seats folded flat.

As for technology, anyone familiar with BMW’s iDrive system will feel right at home in the 3 Series GT--the 2017 model includes the new 5.0 version of the infotainment technology, with a 6.5-inch display screen standard. Different options are bundled together in a number of other packages, including the Luxury, Lighting, and Cold Weather packages. The rest of the cabin is mostly identical to the normal 3 Series, with high-quality fit and finish but a restrained look overall, and the driver’s seat is mounted slightly higher

The 3 Series Gran Turismo is a bit of an oddball and seems to be another step in the Germans’ quest to have a model for every single type of driver. It’s basically a car for someone who wants the practicality of a hatchback, the rear seats of an executive car, and the nimbleness of a normal 3 Series sedan. The GT hasn’t been fully embraced by the BMW faithful, but this type of buyer does exist, and the new engine lineup further improves the car’s performance.

Have you driven a 2017 BMW 3 Series Gran Turismo?
Rank This Car