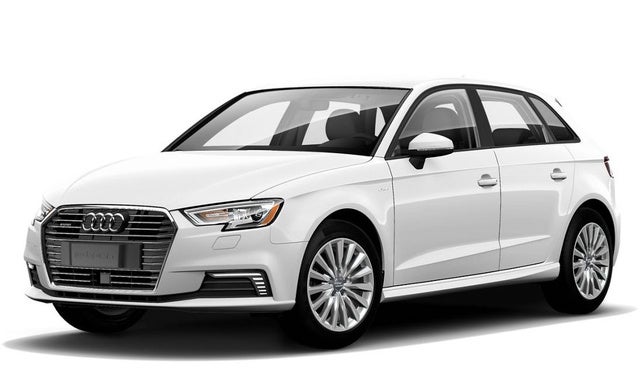 CarGurus has 79 nationwide A3 Sportback listings starting at $19,999.

With the fallout from the Volkswagen diesel emission scandal, Audi has been exploring diesel powertrain alternatives. Electric and hydrogen vehicles are currently in the pipeline, but does Audi have any existing fuel-efficient, non-diesel options? The A3 Sportback e-tron is Audi’s second hybrid vehicle, after the Q5 hybrid first released in 2013, and for 2017 the Sportback e-tron is undergoing a model refresh.

The 2017 A3 Sportback e-tron receives updates similar to those the A3 and S3 sedans will get. Its exterior features the wider and sharper Singleframe grille, paired with LED daytime running lights and optional LED headlights. An available Sports package adds 18-inch wheels and a roof spoiler to the exterior.

Audi has also improved the A3 Sportback e-tron’s available technology offerings with an updated MMI infotainment system and a new Virtual Cockpit system. The MMI system is situated on a 7-inch pop-up screen and features a better interface, Apple CarPlay and Android Auto integration, and optional connect PRIME and connect PLUS services that include Google Earth navigation with automatic traffic rerouting, Internet radio, and a built-in Wi-Fi hotspot. The Virtual Cockpit system swaps the standard instrument cluster for a 12.3-inch screen that can display either a standard instrument layout or an "infotainment" mode with enhanced Google Maps navigation.

The A3 Sportback e-tron’s already pleasant interior remains largely unchanged. A minimalist design for the dash and the use of high-quality materials put the A3 Sportback e-tron toward the top of its class. Like the A3 sedan, the Sportback does have a tight back seat with little head- or legroom. However, cargo space is slightly bigger than the sedan’s at 13.6 cubic feet and can be increased to over 43.5 by folding the rear seats.

Power for the A3 Sportback e-tron comes from a plug-in hybrid powertrain comprised of a turbocharged fuel stratified injection (TFSI) 1.4-liter 4-cylinder engine, an electric motor, and an 8.8kWh lithium-ion battery pack. Combined output stands at 204 horsepower and 258 pound-feet of torque, with power flowing through a 6-speed dual-clutch transmission to the front wheels. The Sportback e-tron can reach a speed of 60 mph in 7.6 seconds. The EPA has not yet released fuel economy figures for the 2017 model, but we expect them to be same as the 2016 model’s, with a rating of 83 MPGe combined and an estimated electric-only range of 16 miles (fairly short for a plug-in hybrid). Recharging the battery takes about 8 hours when plugged into a 120-volt outlet and 2.25 hours when plugged into a 240-volt charger.

The Pre Sense Basic and Pre Sense Front systems are now standard on the A3 Sportback e-tron. Pre Sense Front monitors traffic in front of the vehicle—if it detects an obstruction on the road, it will first provide an audible alert to the driver of the impending danger. If the driver hits the brake after the alert, the brake-assist system will provide maximum stopping force, but if the driver does not take action, Pre Sense Front will partially activate the brakes and ready Pre Sense Basic. Pre Sense Basic monitors the braking and stability control systems—if it detects a skid or heavy braking, it will turn on the hazard lights, close the windows and sunroof, and tighten the seat belts to provide full protection to passengers. Other safety equipment for the A3 Sportback includes a full suite of airbags, stability control, a reversing camera, and parking sensors. The Prestige trim also comes with lane-departure prevention and blind-spot monitoring.

Users ranked 2017 Audi A3 Sportback against other cars which they drove/owned. Each ranking was based on 9 categories. Here is the summary of top rankings.

Have you driven a 2017 Audi A3 Sportback?
Rank This Car

Cars compared to 2017 Audi A3 Sportback

CarGurus has 79 nationwide A3 Sportback listings starting at $19,999.

Do The Prices For Audi Etron Reflect Shipping Or Is That An Extra. Also, I...

What is reflected in the dealer pricing. Is shipping include, processing fees and Audi incentive. Are these all added on to or deleted from the dealer price presented

2017 Audi A3 Sportback Trims For Sale