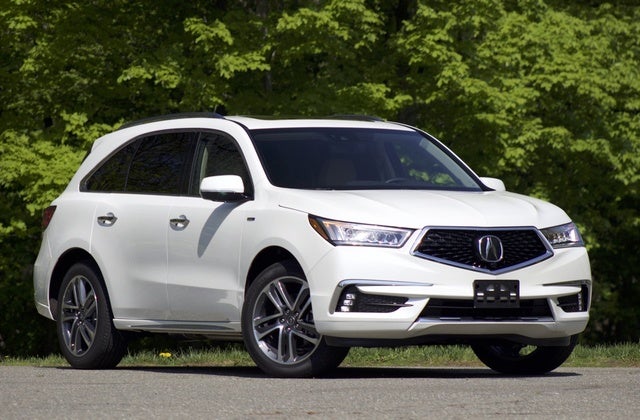 Looking for a Used MDX Hybrid Sport in your area?

Acura’s 2017 MDX Sport Hybrid ditches the “beak” grille and adopts a new hybrid drivetrain that is at the same time sporty and efficient.

When I talk to folks about cars and mention certain hybrids, some become disappointed. That’s a dated way of thinking. Sure, if you are a performance enthusiast, the sight of a Toyota Prius does nothing to stir your passion. But there are a growing number of vehicles with hybrid drivetrains that provide solid performance as well as a few extra MPGs.

The 2017 Acura MDX Sport Hybrid is one such vehicle. It takes a drivetrain inspired by the Acura NSX hybrid supercar and brings it to a large, three-row SUV that also happens to have sporty driving dynamics. What should stand out to any high-power hybrid skeptic is that the Sport Hybrid is the range-topping version of the 2017 MDX. 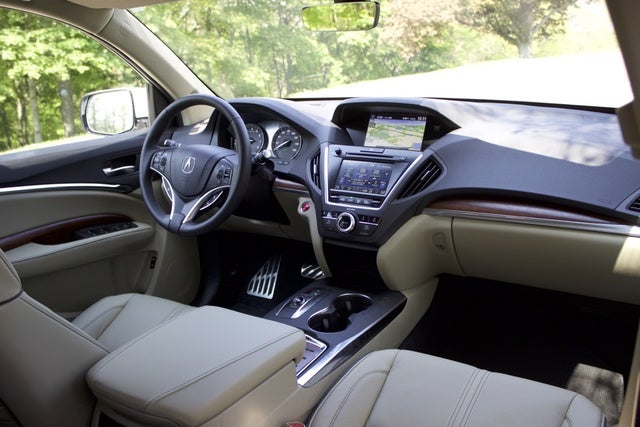 The 2017 model year marks a mid-cycle refresh of the MDX, and what's important about this SUV isn’t what has been added, but what has been removed. The first-generation MDX showed up in 2000, and like all versions of the MDX, it was based on that year’s Honda Pilot.

When the second generation arrived in 2007, it shared the Pilot’s space and refinements, but the MDX added the much-derided Acura corporate “beak” grille. This grille caught criticism through the years. An Acura dealership in Los Angeles was even painting these grilles the color of the rest of the car. Acura, of course, chided this dealership.

When a third-generation MDX arrived for 2014, we were convinced our long national nightmare with Acura grilles was over… but much to our dismay, the beak would not break. Well, I am pleased to announce the 2017 Acura MDX does away with the beak grille. The new, massive grille makes a bold, coherent statement and is flanked by well-defined HID headlights.

Inside, the 2017 MDX carries over the upscale aesthetic from the 2016 model. Acura is a luxury brand, but it’s almost surprising how nice the interior of the MDX Sport Hybrid is. The front seats are really soft, and chrome and woodgrain are both used sparingly in thoughtful ways. The result is an overall look and feel in the cabin that's rather substantial. Too often Acura gets tossed in with the “near-luxury” brands like Buick and Lincoln. That might be true for the compact Acura models, but not so for the MDX.

In the front row, the center stack narrows as it goes downward. While this may seem like a simple design choice, it's actually quite clever and accomplishes two things. It accentuates the center touchscreen while simultaneously providing added legroom. Some automakers choose large bezels to bring attention, but this is a far more clever approach. 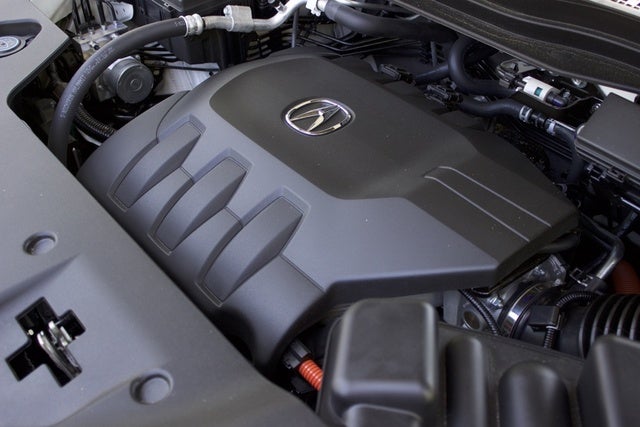 The MDX Sport Hybrid comes standard with a 3.0-liter V6, a lithium-ion battery, and three electric motors. Power gets sent to all four wheels, since every version of the Sport Hybrid gets all-wheel drive (AWD). One motor works up front, helping the V6 send power to the front wheels. Out back, there’s a motor at each rear wheel, creating a gas-electric all-wheel-drive system. Together, they operate as Acura’s Super-Handling All-Wheel Drive and put out a net 321 horsepower and 289 lb-ft of torque. That’s a bump of 31 hp and 22 lb-ft over the conventionally powered model.

This system was inspired by the NSX hybrid supercar, and it allows each of the rear wheels to have a different level of power. Unlike other hybrids, which typically employ a continuously variable transmission, the MDX has an actual 7-speed dual-clutch transmission with paddle shifters.

Unfortunately, this is where Acura gets in its own way again. The MDX features an annoying proprietary shifter design. There is a button for Park, a pull-tab for Reverse, and a circular button for Drive. As we’ve discussed in other reviews of cars with unique shifter designs, there's a safety issue in moving away from the same shifter design that has been used for years. Like all automakers, Acura should quit screwing around and go back to a normal shifter.

The MDX Sport Hybrid also features a Dynamic Mode selector to choose different drive modes. This could also have been designed better. Currently, you have to press it once, and then press it again to cycle through Comfort, Normal, Sport, and Sport+ drive modes. It takes too many button presses to cycle through to the mode you want. A switch, toggle, or dial would all have worked better than this setup.

But hop behind the wheel and start driving and you might forgive the MDX for those control design quirks. The MDX has a sporty ride quality, even in Comfort mode. The steering has a great feel to it, and the vehicle corners very well. Its acceleration and performance are surprising, and not just for a hybrid. The MDX Sport Hybrid handles and accelerates on par with a BMW X5—seriously! 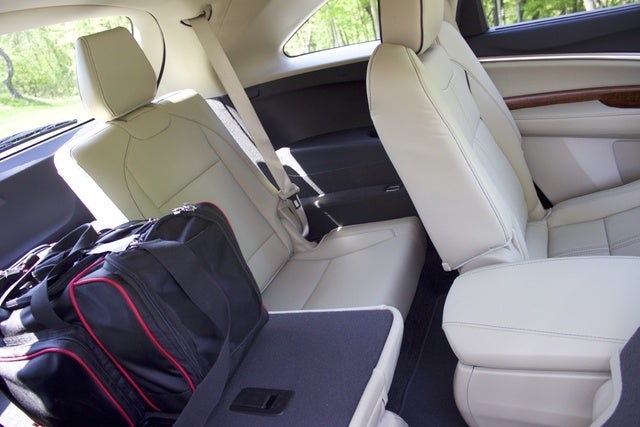 Fold the seats in the second and third rows of the MDX down for over 90 cubic feet of cargo space. That’s pretty impressive—and not just for a hybrid. It’s actually almost into Chevy Tahoe territory and well above the cargo figure for the MDX Sport Hybrid’s natural competitor, the Infiniti QX60 Hybrid.

For the driver, steering-wheel-mounted controls are busy, but sensible. The center console is deep and has a helpful sliding lid with runners to keep your phone from flying off it in hard turns.

Our MDX Sport Hybrid test model features the Advance Package, which adds a rear entertainment system and second-row captain’s chairs. The chairs are nearly as comfortable as sitting up front, and they fold and slide easily, giving you easy access to the third row. That third row is great for kids, but adults should try cramming in there only in a pinch. Adults should stay in the second row or front seats. 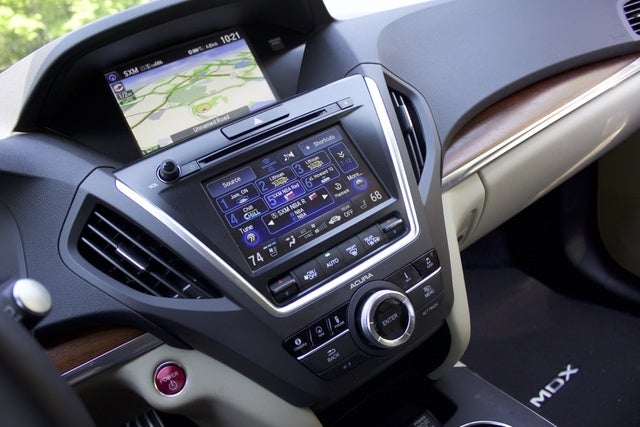 The MDX has another much maligned feature—the dual-screen infotainment system. The dual-screen setup is actually not as bad as I remember. It offers Home buttons for the major systems like Audio, Climate, Navigation, and Phone. Honda has caught a lot of flack for this dual-screen system in the past, but saving a radio preset and zooming in or out on the Nav system are all pretty straightforward operations.

But then if you move to the climate controls, the system shows its true colors, and operation is more complicated than it should be. It has added menus to get to very basic controls. You really shouldn’t need an added menu to select fan speed or direction. These are things you should be able to quickly press when you hop into the car at 5 am and it’s dark and cold. A few extra real buttons couldn’t hurt. 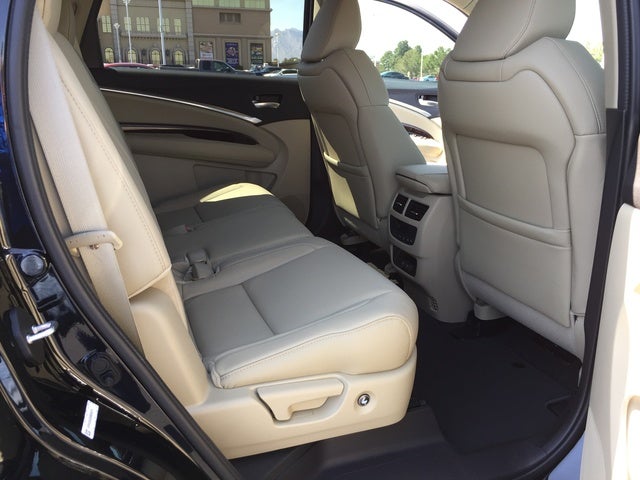 The MDX comes standard with plenty of safety features, including a reversing camera with dynamic guidelines and front and side impact airbags, and it also has high-tech safety features like forward-collision mitigation, lane-departure avoidance, and radar-based dynamic cruise control.

With these packages selected, the 2017 Acura MDX has been named a Top Safety Pick+ by the Insurance Institute for Highway Safety, with safety technology considered Superior. It also earned a 5-Star overall safety rating from the National Highway Traffic Safety Administration. 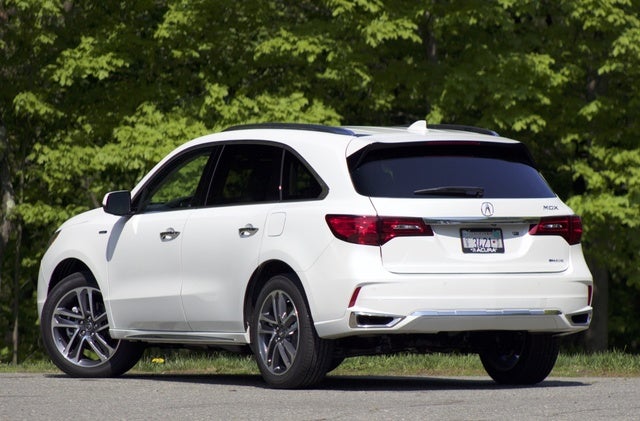 Base MSRP for the 2017 Acura MDX is $44,050. The Sport Hybrid starts at $51,960 and comes standard with the Technology Package. Our test model clocked in at $58,975 with destination. This is the Advance Package model, which comes with auto-dimming high beams, an upgraded Milano leather interior, heated and cooled front seats, second-row captains’ chairs, and USB for the first, second, and third rows to keep the kids’ devices charged all the way in the back. For most parents, that's a feature well worth having.

So should you get the MDX, or a fully loaded Honda Pilot? Or maybe even one of its competitors? The MDX does a lot of little things to try to differentiate itself from the Pilot—the “unique” shifter design and the dual-screen setup are all there to make the MDX feel special and different. But if Acura could get out of its own way, it would see it already has something special in the MDX Sport Hybrid: a big, versatile SUV with a powertrain that spells the future for efficient performance.

What's your take on the 2017 Acura MDX Hybrid Sport?

Users ranked 2017 Acura MDX Hybrid Sport against other cars which they drove/owned. Each ranking was based on 9 categories. Here is the summary of top rankings.

Have you driven a 2017 Acura MDX Hybrid Sport?
Rank This Car

Looking for a Used MDX Hybrid Sport in your area?

2017 Acura MDX Sport Hybrid Qualfiy For The Hybrid Rebate For The State And...