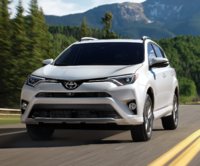 A hybrid drivetrain in a crossover SUV proves you can have your cake and eat it, too. 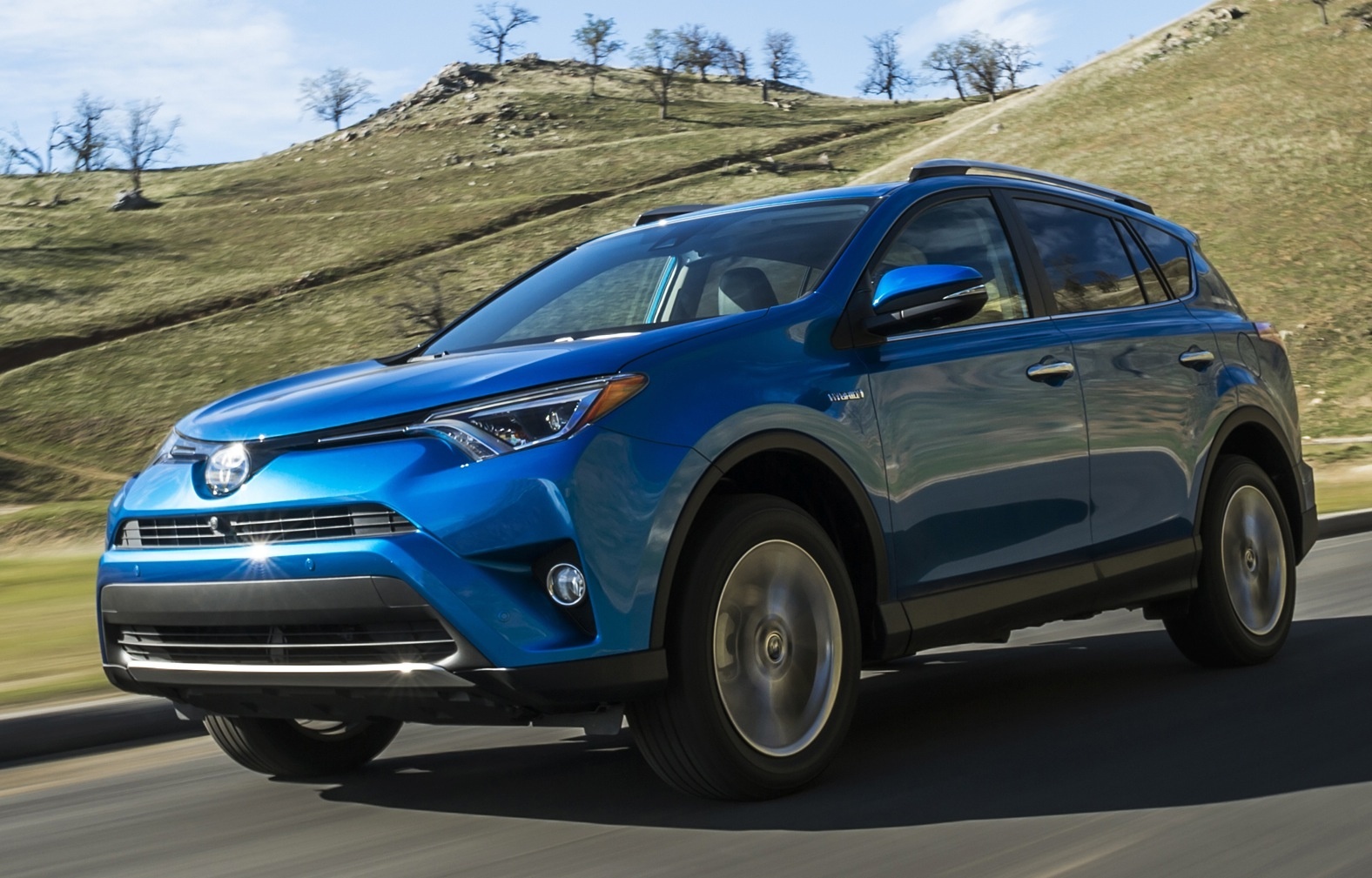 Hybrids have been sold since around the turn of the century. In that time there have been sedan, hatchback, and even pickup hybrids. There have also been a few hybrid SUVs here and there, but Toyota thinks people still don’t understand just how capable and efficient a hybrid SUV can be. The Japanese automaker is convinced you’ve never seen one quite like the 2016 Toyota RAV4 Hybrid.

On paper, the RAV4 Hybrid would closely compete with the Subaru Crosstrek Hybrid, but the Subaru is more a high-riding wagon. In reality, the RAV4 Hybrid more accurately competes with the big names in the hot-selling compact SUV segment, such as the Ford Escape and Honda CR-V. Toyota claims the RAV4 Hybrid can do all things, such as be more efficient, more capable, and more versatile. Can this offering possibly be the “magic bullet” Toyota makes it out to be? Read on to find out! 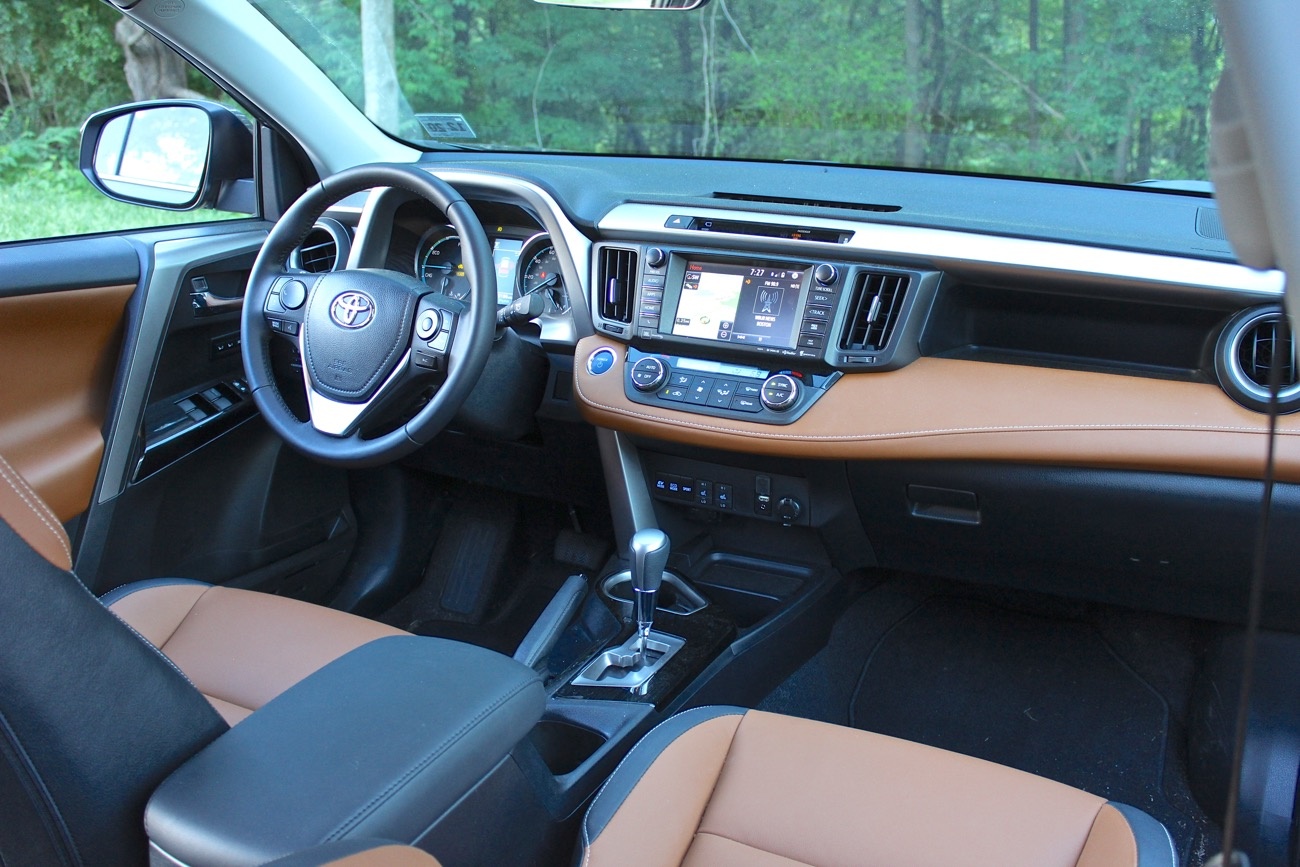 There’s not much to visually differentiate Toyota's 2016 RAV4 Hybrid from its conventionally powered sibling. The only things you’ll notice are the blue accents for the Toyota logos and the subtle “Hybrid” badging. And that similarity is not a bad thing!

Those last two updates are meant to give the RAV4 Hybrid a more “macho” and utilitarian look. Sure, this crossover is immensely versatile and useful, but it's still a suburban-dwelling SUV. But the people have spoken, and the people want a car-based crossover for the street, but one that looks like it could cross the Rockies.

Inside, there are not as many changes, and we see nothing wrong with that. The cabin of the RAV4 Hybrid is the perfect blend of form and function. The RAV4 Hybrid is offered in XLE (middle of the pack for the non-hybrid trims) and Limited versions. We drove a Limited, which features a very fetching two-tone interior scheme capped with extensive use of leatherette and soft-touch materials. The result is a near-luxury experience. 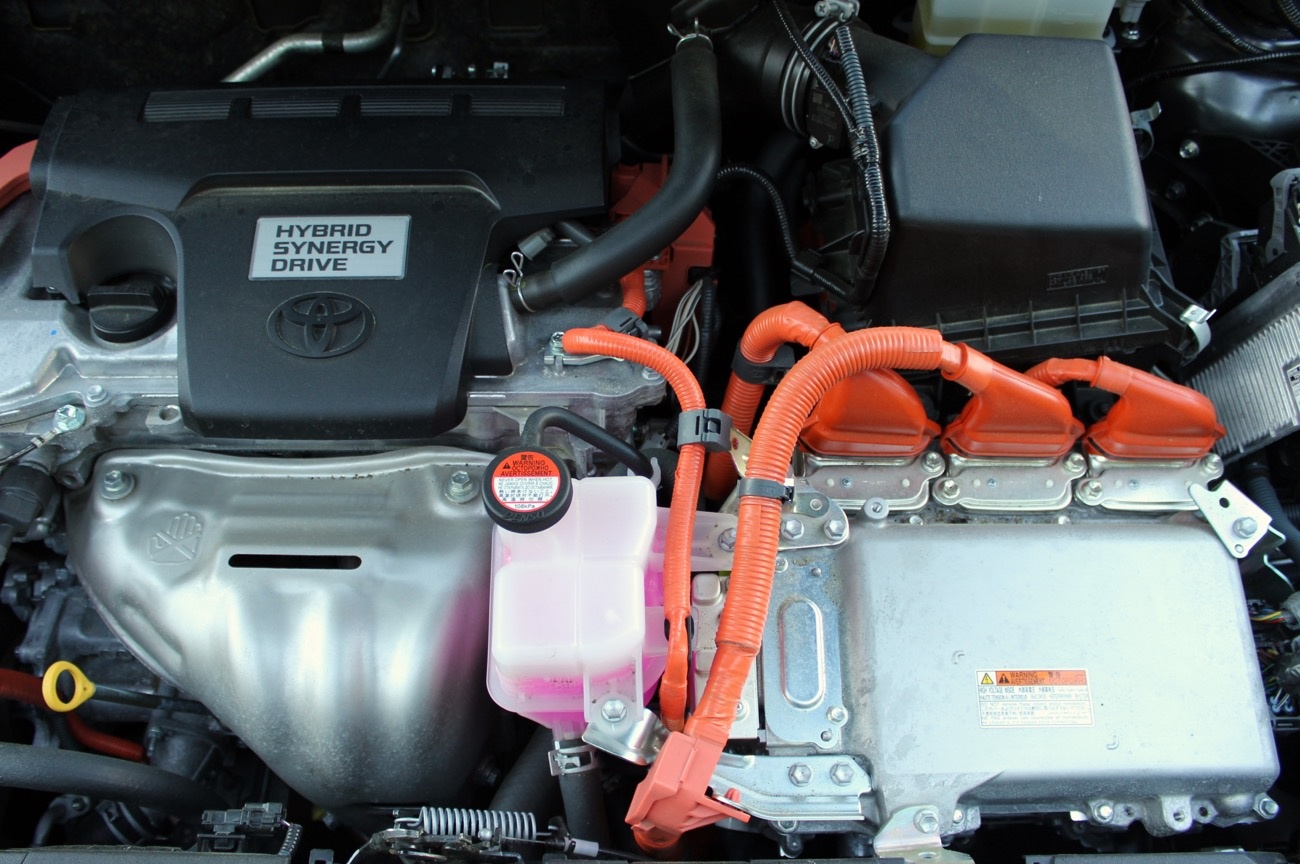 One outdated stigma regarding alternative fuels is that performance is a casualty in the pursuit of efficiency. The truth is you can have your cake and eat it, too.

The RAV4 Hybrid's powertrain starts with a 2.5-liter inline 4-cylinder married to a trio of electric motors (two in the front and one out back). The result is 194 net horsepower, 67 of which come from the rear electric motor, making this an electronic all-wheel-drive setup.

The third electric motor supplies power to only the rear wheels. This setup should be fine in most driving conditions, but some folks that drive on beaches or live in really inclement areas might prefer the mechanical AWD of the non-hybrid model, which has a locking function.

That 194 net horsepower is a good deal more than the 172 horsepower the non-hybrid RAV4 puts out and makes the RAV4 Hybrid one of the most potent offerings in the small SUV market—it's outdone only by the Ford Escape EcoBoost.

In addition to being more powerful than its conventionally driven twin, it's also more efficient. The EPA rates the RAV4 Hybrid at 34 mpg city, 31 highway, 33 combined. We were very impressed to see our own fuel economy at around 33 and 34 mpg in combined city and highway driving.

The RAV4 Hybrid has a rather poor turning radius for a crossover, but its overall driving dynamics are pleasing. Steering is well weighted, and the vehicle remains level through cornering. Our Limited featured larger wheels with smaller tires, but still absorbed bumps well. If you are sensitive to bumps in the road, you’ll appreciate the smaller wheels and larger tires of the XLE model. Regardless of the trim, most drivers will be pleased with the overall handling and steering feel of the RAV4 Hybrid. 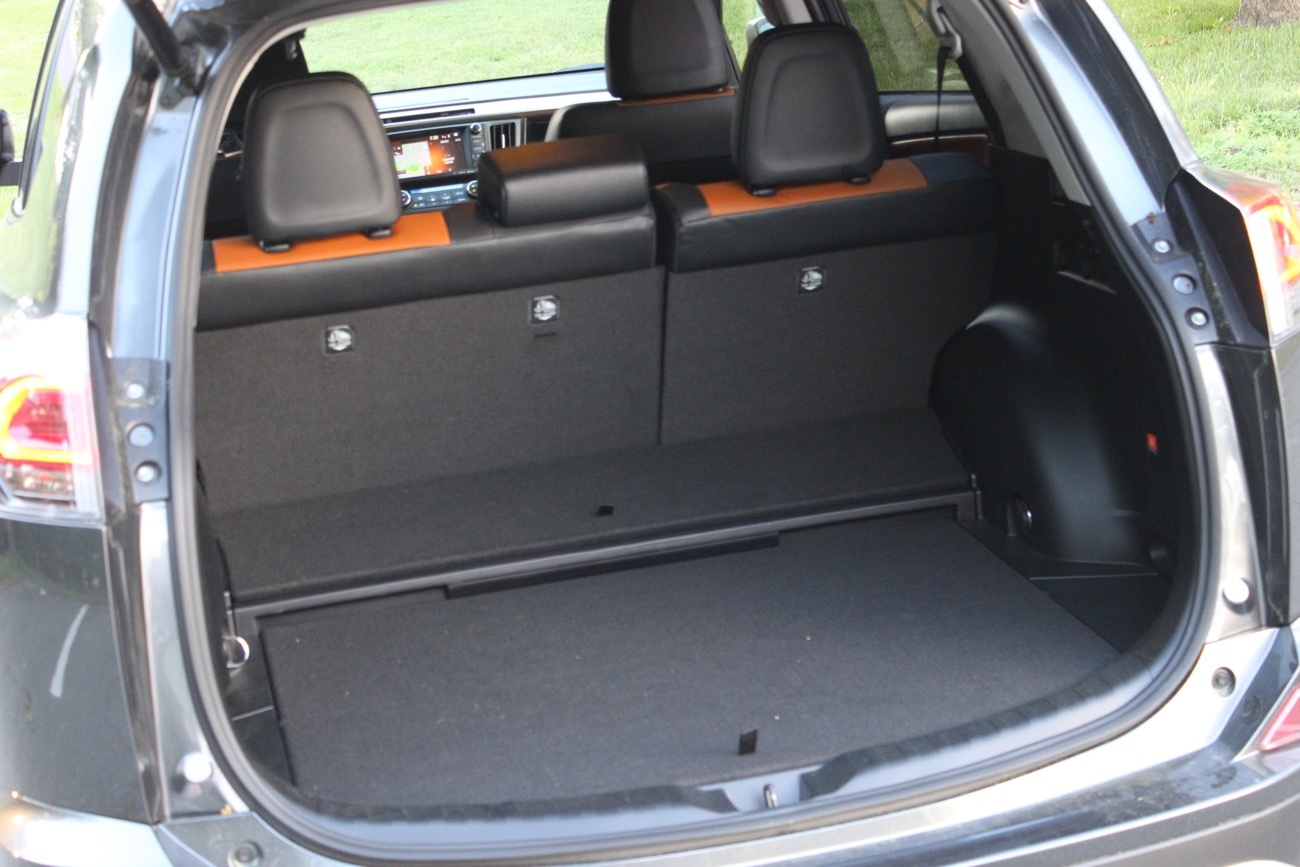 So far, we’ve seen that the RAV4 holds up to the “Hybrid” in its name, but what about its SUV functionality? Once again, this vehicle knocks it out of the park. The front seating area is decently sized, even for taller drivers. The seats are comfortable and make it easy to find a neutral seating position. The two-tier layout for the dash and center console lets audio and climate controls live up in the elegant dash panel, while the lower area harbors cupholders, cubbies, and other assorted spaces for keys, wallets, cell phones, and so on. One puzzling thing is the placement of the forward cupholders. One is in front of the shifter, and one is aft of it. This may be so large cups don’t bump into one another, but the aft cupholder was very awkward to reach. It’s a small hiccup in an otherwise exemplary layout.

The rear seats have plenty of leg and headroom, and they even recline. Both the reclining and fold-flat functions are performed by a lever on the side of the seat, rather than separate toggles like in other SUVs. It is a very simple use of space, and gives way to solid cargo area with the rear seats folded. The hybrid battery pack is right under the rear seats, but doesn’t impact rear seating. In fact, it cuts into the rear cargo area only a little bit, and with a little over 35 cubic feet, but RAV4 Hybrid has one of the best cargo capacities in the segment—hybrid or not. 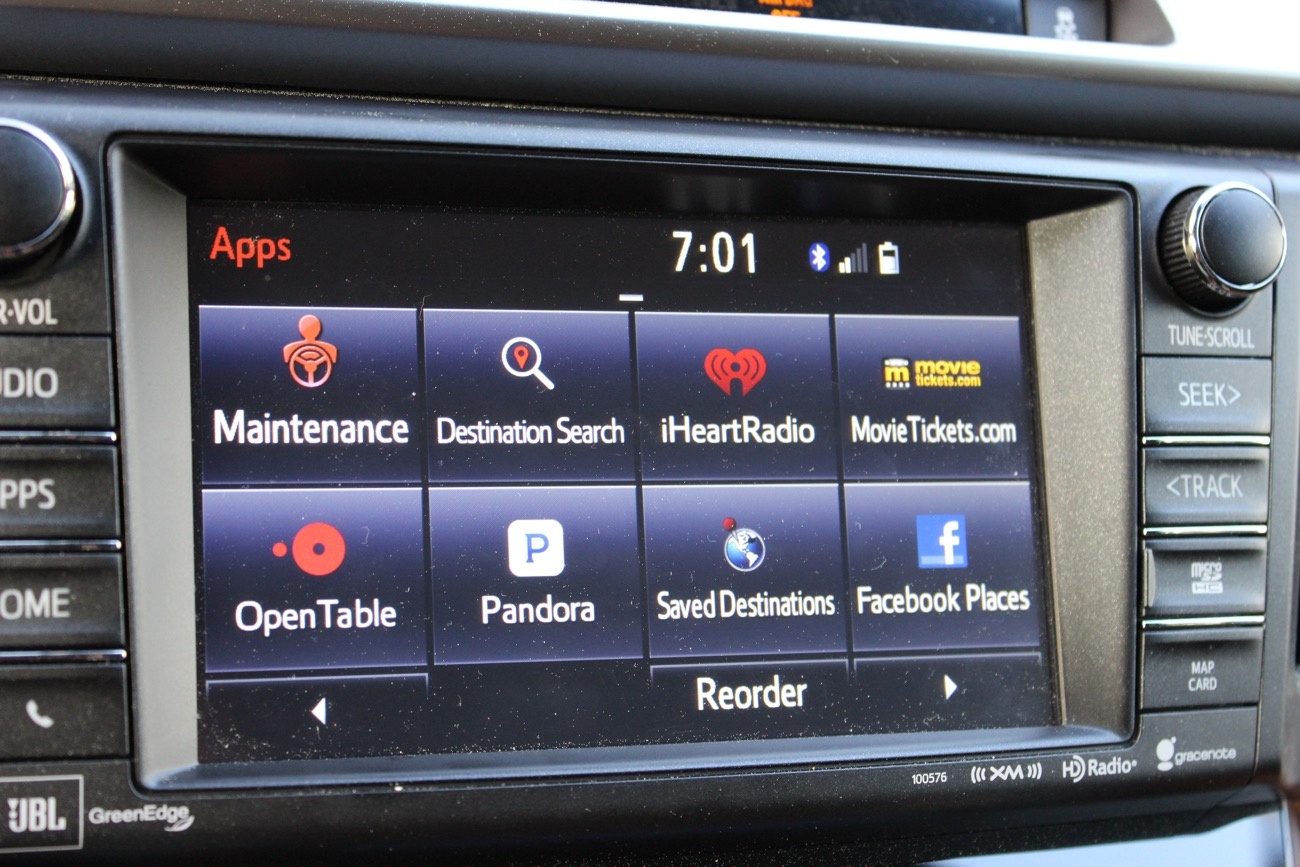 Both XLE and Limited trims feature Toyota’s 6.1-inch touchscreen navigation system, with plenty of connectivity and even a host of apps to make travel and getting around easier.

Bluetooth pairing is a snap, and connecting via the USB is made easy by the port’s prominent placement in the center console. From the touchscreen, you can access many of your smartphone’s features, and you can access music from apps like Spotify on your phone.

The touchscreen also features apps like OpenTable, Pandora, Yelp, and Facebook locations. Despite all this connectivity, the RAV4 Hybrid does not feature Apple CarPlay or Android Auto. The automaker claims its proprietary systems offer all the same functionality as those automotive OS platforms, but buyers are more loyal to the maker of their smartphone than they are to any automaker in 2016. This could prove a shortsighted move by Toyota. That said, Toyota’s in-house systems are more than capable for music playback and navigation, and they offer strong voice-control access to many features. 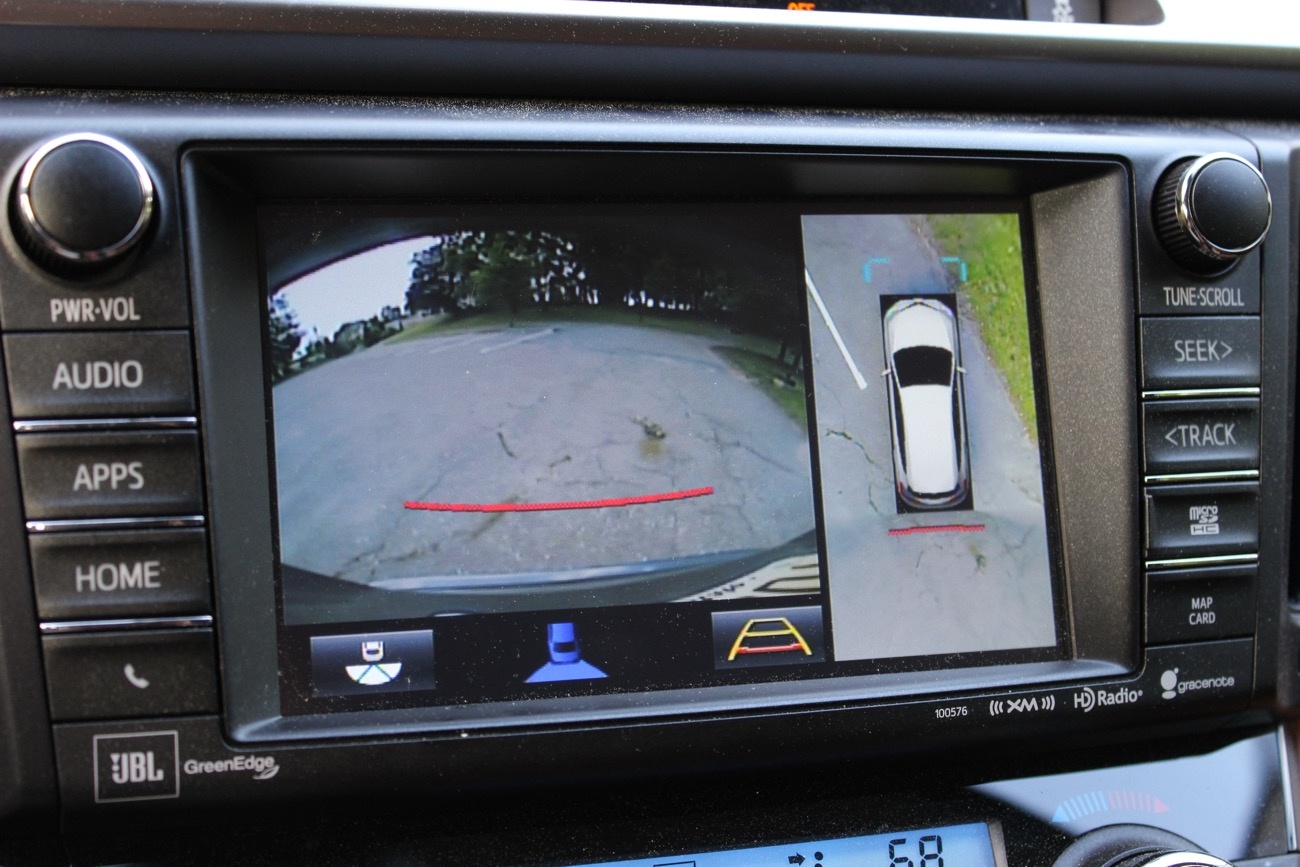 The RAV4 Hybrid comes with the full complement of front and side impact airbags, and it's also available with a number of high-tech safety features.

Toyota Safety Sense P (TSS-P) is the automaker’s name for its suite of advanced safety gear. It includes pre-collision sensing and avoidance, pedestrian detection, lane-departure alert, auto-dimming high beams, and dynamic radar cruise control. More and more vehicles in this segment offer such features, and it's reassuring that one of the biggest players in the market is keeping pace. 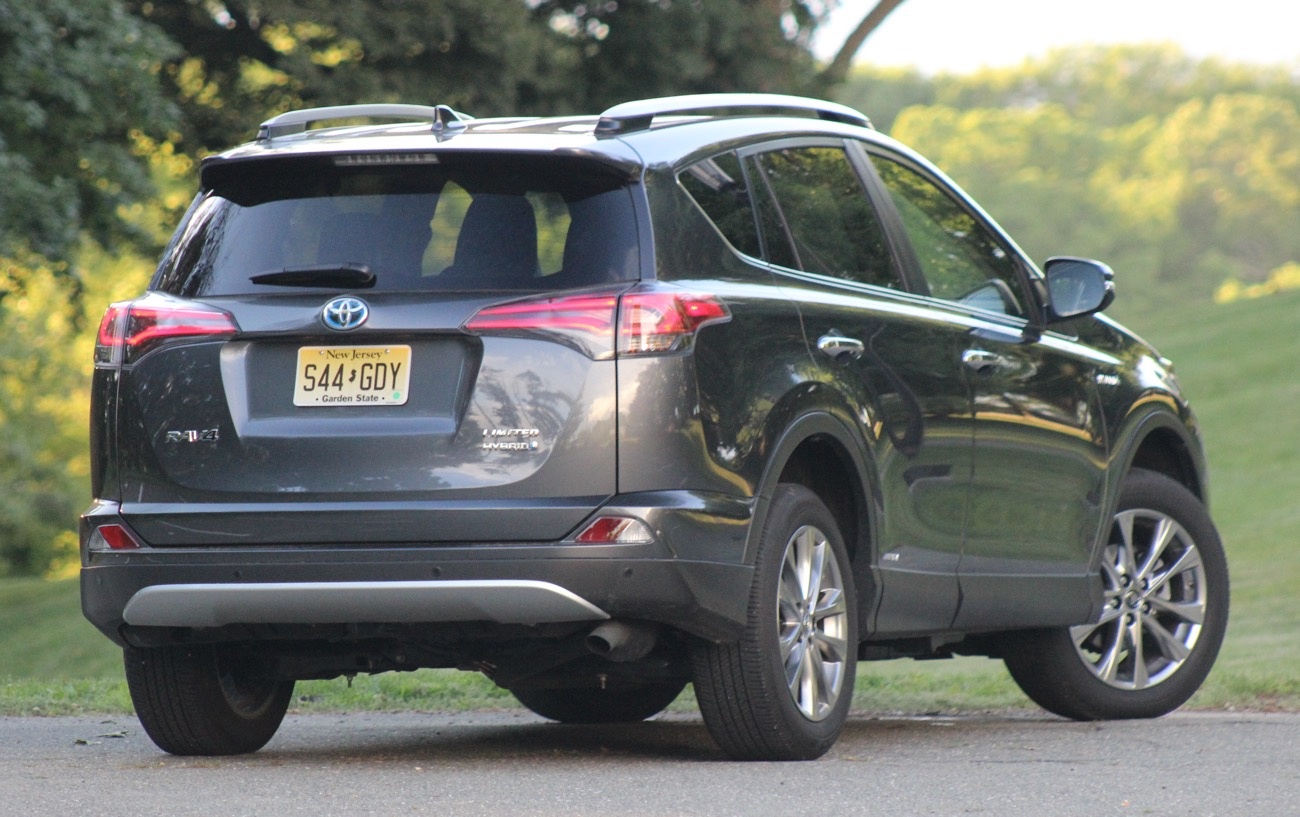 The 2016 Toyota RAV4 in XLE Hybrid trim starts at $28,370. The Limited starts at $33,610. Our Limited test model came in at $35,945. That price included the Advanced Technology Package, which features the aforementioned “bird’s eye view” camera.

Compare that to a mid-level SE trim (remember, the XLE is the RAV4’s mid-level trim) of the 2017 Ford Escape with available AWD and the stronger EcoBoost engine. The price is roughly $29,000. A top-tier Titanium trim with the more potent engine, AWD, and options costs just under $35,000.

As for the 2016 Honda CR-V, a mid-level SE trim with AWD costs $26,745, and an AWD top-tier Touring trim comes in at just over $34,000. But the CR-V’s 185 horsepower is less than that of the RAV4 Hybrid, and the Honda’s continuously variable transmission (CVT) leaves it feeling like it has even less power than that.

The real surprise is that non-hybrid RAV4 models of the same trim, with AWD and similar equipment, all come in at only about a thousand dollars less than their hybrid counterparts. It seems like a small price to pay for better performance and fuel economy. If you were already in the market for an XLE or Limited RAV4, we strongly suggest you get the hybrid version. It truly is the perfect blend of capability, efficiency, and versatility.

Phillyfanatic None of these pictures are of a 2016 Rav4 much less a hybrid model. Only the Storm Blue main picture is a hybrid. The picture of the dash is a 2013-2015 Rav4. All hybrid Rav4's have the 4.2" minidisplay in the middle of the instrument cluster as well as an ECO gauge in place of the tachometer. The cup holder is wrong (no handle extension). The white exterior shots show the 2012-2015 fog lights and (of course) lack the hybrid badging.

Have you driven a 2016 Toyota RAV4 Hybrid?
Rank This Car

If Tires Are Over Inflated Will The Tire Pressure Light Stay On?

I purchased a used Toyota hybrid RAV4 2016 in December. I was hit from behind by somebody who was texting and not paying attention in January. The car had been in the shop for a while and I just got...

How do we know who offers no money down leasing?

Vehicle Is Leaking Inside...

RAV4 Hybrid Limited 2016. Car wash forces water through cow grille and spills all over passenger side inside the vehicle. Toyota Corporate and dealership state it's not a design flaw but that I ...