Does the new Prius “shatter expectations” as Toyota boasts? More important, does it retain its vaunted hybrid crown? 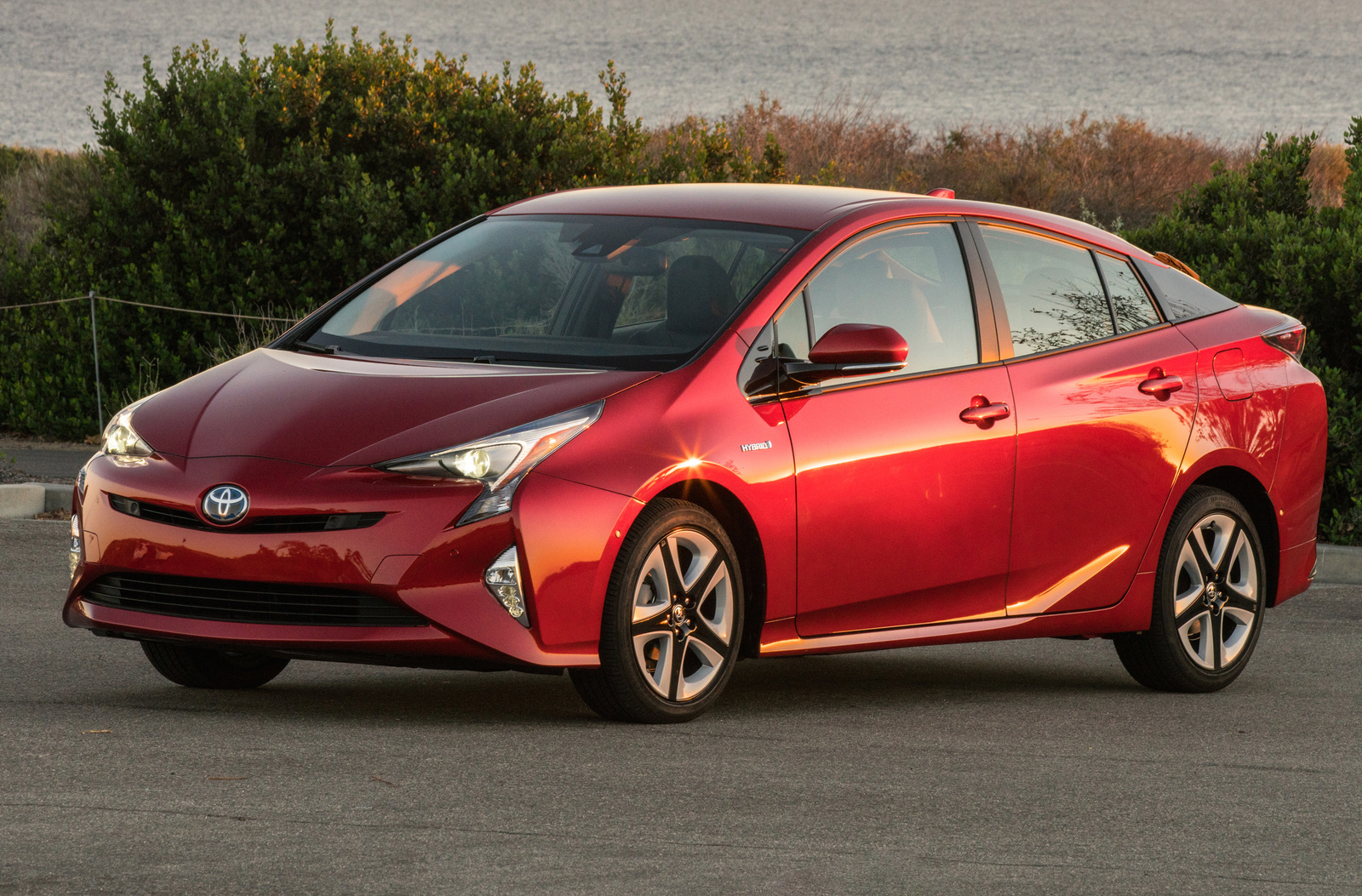 About 10 years ago, if you looked at hybrid sales, they would be closely tied to the price of fuel. As gas prices rose, so did sales of fuel-saving hybrids. As they fell, people were more likely to buy gas-guzzling trucks. But as the years went on, the hybrid market gained traction, and despite still representing a small portion of the total market, the hybrid segment has, in fact, demonstrated staying power.

The standard bearer for this growth has to be none other than the Toyota Prius. The first-generation Prius may have been a slightly anonymous little hybrid. But when the second generation dropped in 2004, that unmistakable Prius profile turned heads and had the fuel-saving capabilities to match. The rest, as they say, is history.

Flash-forward to 2016 and the Prius continues to be the heart and soul of the hybrid market. Since that second-generation version, the Prius has risen to icon status and is now rightfully among the most recognizable. For 2016, the Prius enters its fourth generation, with many of the hallmarks that have made it so popular and a few new tricks as well. Is it enough for the Prius to retain its place as the Hybrid King? Also, does it “shatter expectations,” as Toyota says? Read on to find out. 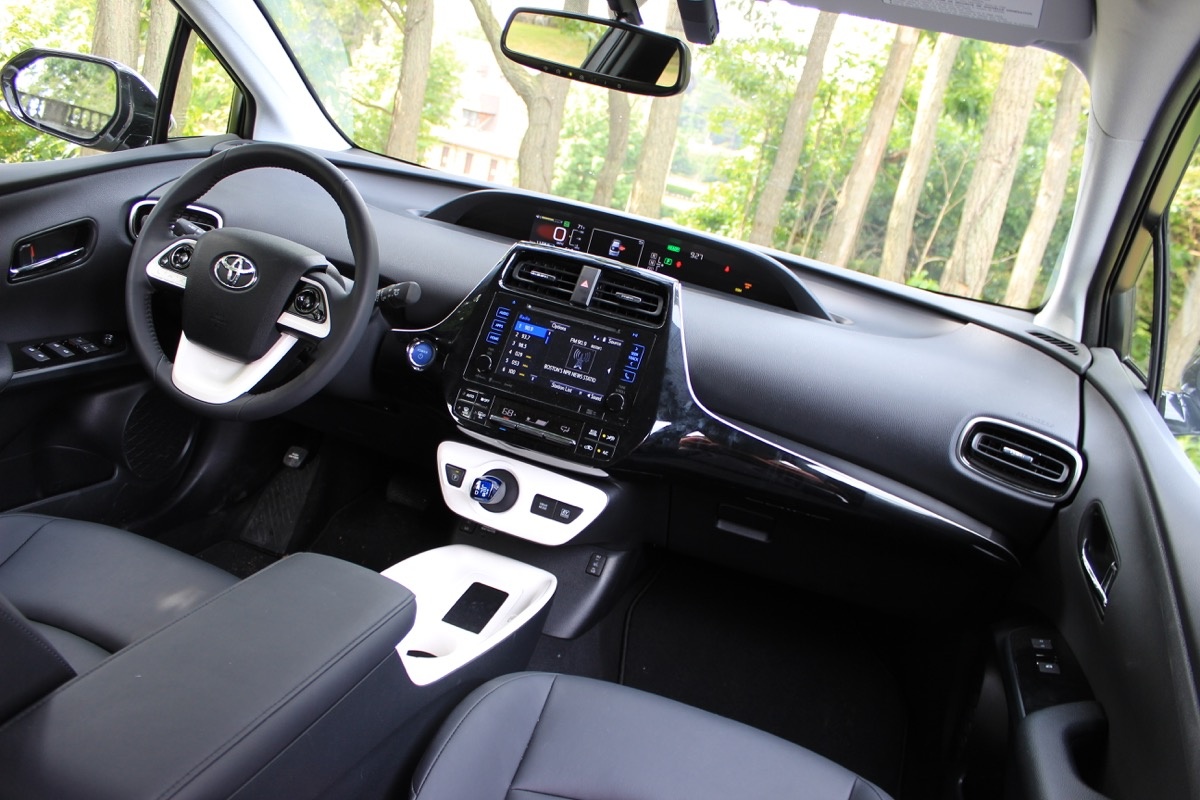 From first glance, the new Prius has that same slippery-through-air silhouette, but look a bit more closely and things become rather different from the previous two generations. Up front, the headlights are, um, unique. They have some extremely strange curves and angles and really look like they haven't decided whether they're coming or going.

From the side, the Prius continues its “Kammback” profile, but with an even more raked rear slope. As a result, the Prius loses its rear quarter-windows, and the C- and D-pillars are merged into one large, blacked-out C-pillar. The Prius almost has a four-door coupe look to it, and that's enhanced by a faux rear diffuser and smoked rear half-window. While the taillights are just as wild as the headlights, it all seems to play better out back with the other design elements. That said, beauty is in the eye of the beholder, and Toyota has been willing to push the design limits of the Prius to turn heads.

Inside, things are equally eye-opening. A large white dished area in the center console, the shifter panel, and the accent panel on the steering wheel all look like some sort of Apple product is underneath the surface trying to break through. It's a unique and odd style choice, especially since Apple’s CarPlay is not available on the Prius, to try to mimic that look.

As in past generations of the Prius, the instrument panel sits in the center of the dash. I fully detest this decision. In pursuit of looking “cool” or “different,” the instrument panel is moved to the center and instantly becomes less useful than if it were in its more conventional place. A head-up display brings some of the key information to a projection on the windshield straight ahead, but it's available only as an option on uprated trims. Given the placement of the instrument panel, this feature should be standard across the lineup. 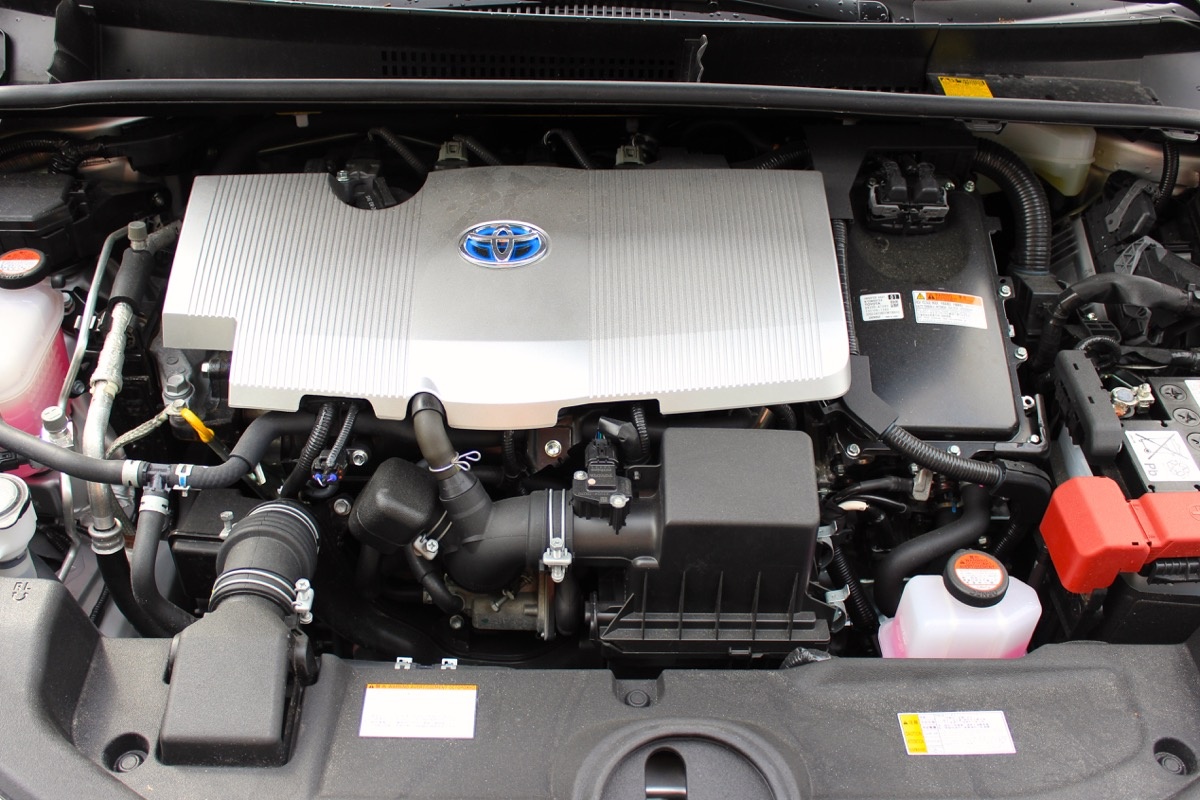 The Prius is powered by 1.8-liter gas engine combined with two electric motor-generators. They output a net 121 horsepower. The Base model stores the electrical power in a nickel-metal-hydride battery, like the one in previous models. But every other trim gets a new, more compact lithium-ion battery pack. You shift it into gear using a strange little joystick. Left and up is Reverse. Just left is Neutral, left and down is Drive, and there’s a separate button for Park.

With luck you’ll get used to the shifter, but like the instrument panel, the Prius just has to play different. But once it's moving, the Prius drives surprisingly well. Step on the gas and go—pickup is pretty decent, and it corners well, too.

On the other hand, the Prius falls short on braking feel. It’s hard to say exactly what they feel like, but definitely not normal brakes; their distinctive feel likely has to do with the regenerative braking system, which helps save gas. 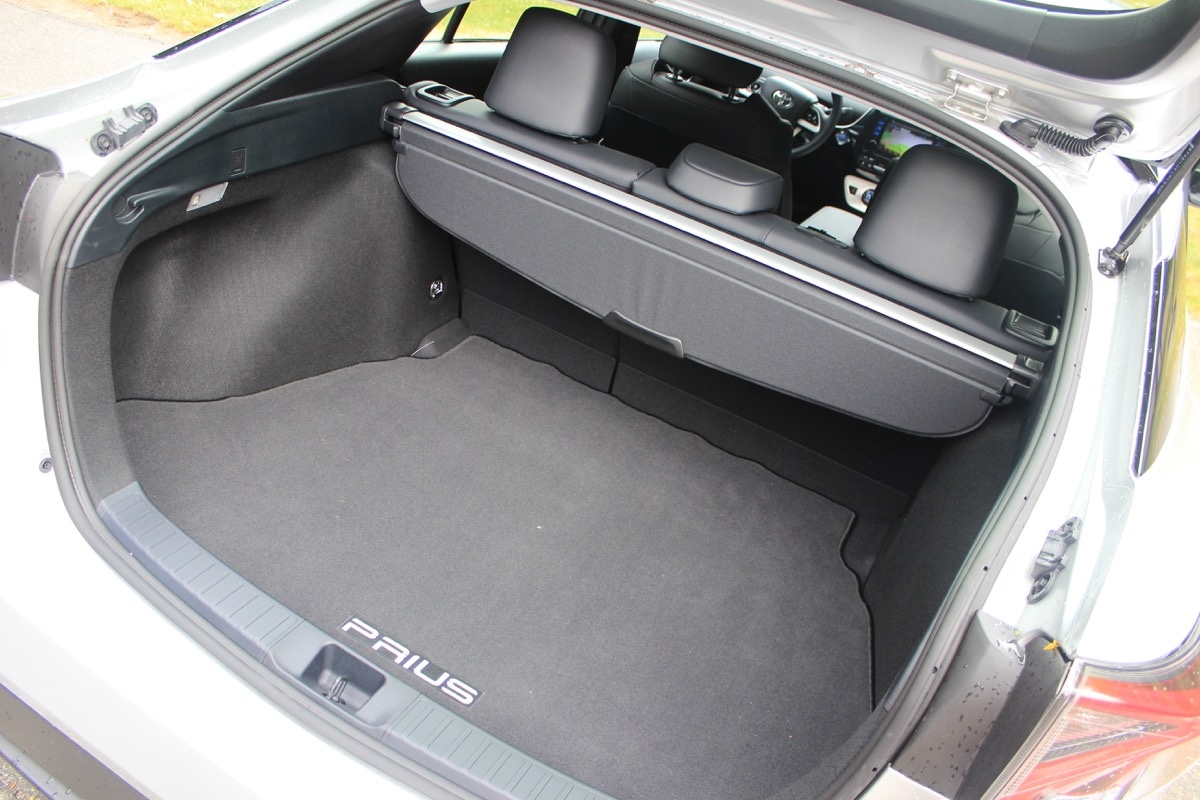 Despite the unique look of the center console and shifter, the Prius is ergonomically quite sound. There are plenty of cupholders, compartments, and places for all your daily gear. In that Apple-inspired center console, there's a small area that might at first look just like a place for your wallet and keys, but it's actually a wireless charging pad for properly equipped Android phones. (There are also attachments to equip iPhones with wireless-charging capability.)

The curvy silhouette of the Prius results in low overhangs for the second-row doors. Taller occupants will need to lower their head a little more than usual to avoid smacking it while entering. Once in the back seat, however, there's plenty of head- and legroom, even for taller drivers. Front and rear seats are comfortable, even for longer drives. 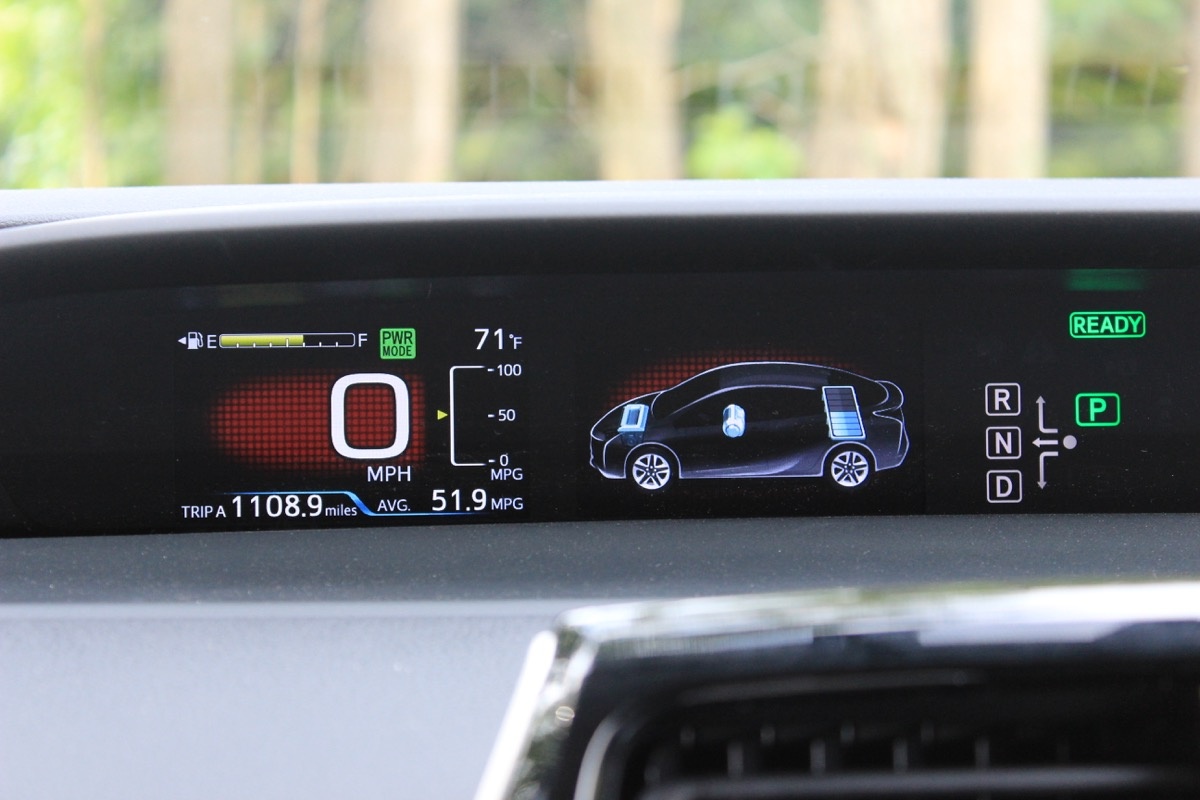 Despite its unfortunate placement in the center of the dash, the instrument panel provides a wealth of information and allows you to cycle through several menus chronicling fuel consumption as well as a live powertrain-status display. It’s rather fascinating to observe the many different ways that the components of the powertrain work together.

Move up to the Three, Three Touring, Four, or Four Touring and you'll get a 7-inch touchscreen, a 3-month trial of XM satellite radio, the Entune app suite, a navigation system, and HD predictive traffic and Doppler weather overlay. 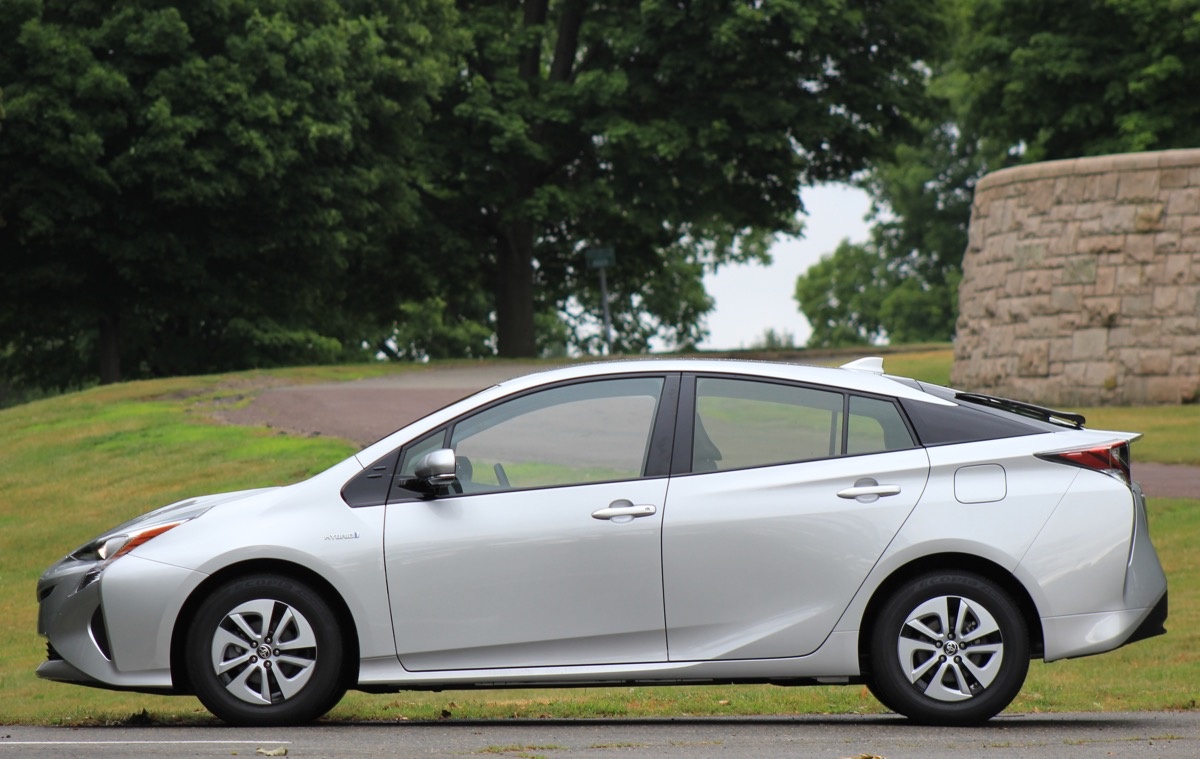 Every Prius comes with Toyota’s Star Safety System, which includes enhanced vehicle stability control, traction control, an antilock brake system with electronic brakeforce distribution, brake assist, and Smart Stop Technology. This is added to the advanced front- and side-impact airbags as part of a comprehensive suite of standard safety features. 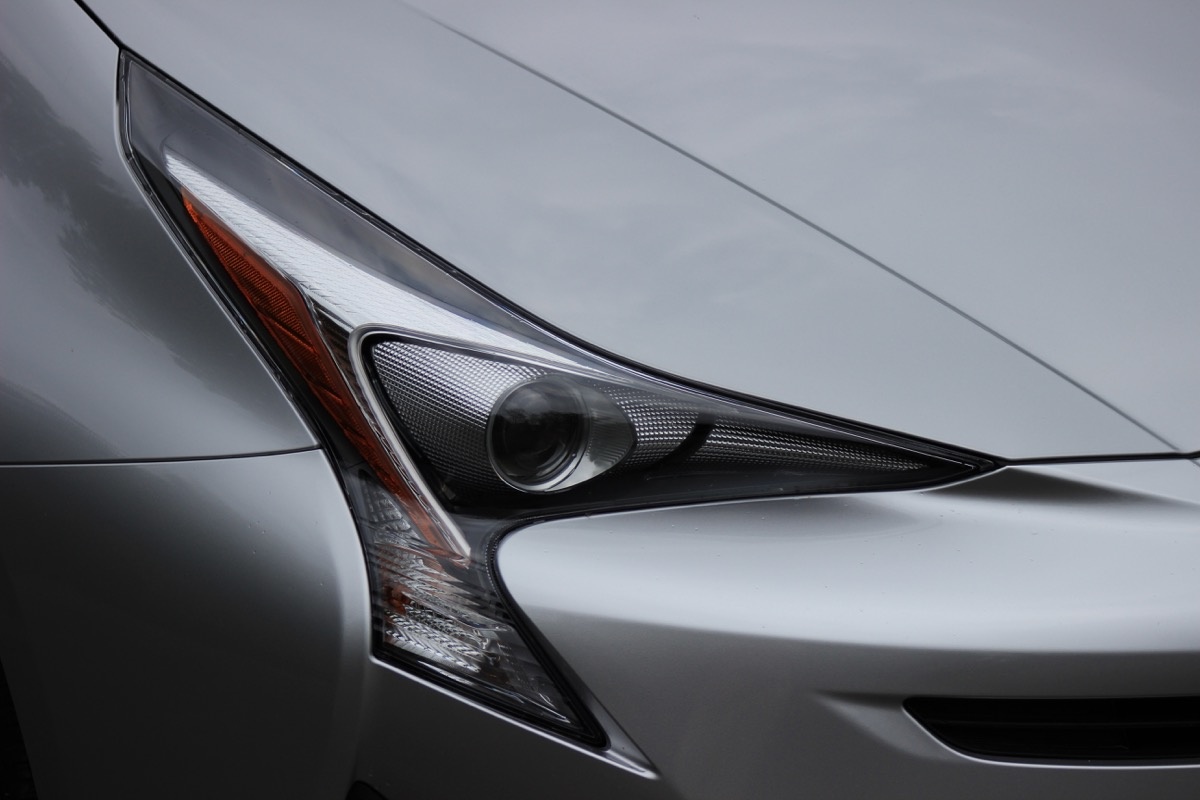 Our test car costs about the same as a Ford C-Max Hybrid and a Toyota Camry Hybrid SE. And it costs thousands less than a similarly equipped Ford Fusion Hybrid Titanium FWD. The Prius will always have its fans, and its pricing is low enough to bring new recruits into the clan.

The pricing is competitive enough and the aesthetic and features are attractive enough to both retain the Prius faithful, and more importantly, attract a new crop of owners. Does it shatter expectations? Not really, but responsive handling and surprisingly quick pickup are pleasant surprises. If you enjoy saving fuel, don’t mind the unorthodox headlights, and want a daily driver with solid ergonomics and impressive cargo space, the 2016 Toyota Prius meets every expectation of the franchise. For us, that’s more than enough.

Users ranked 2016 Toyota Prius against other cars which they drove/owned. Each ranking was based on 9 categories. Here is the summary of top rankings.

Have you driven a 2016 Toyota Prius?
Rank This Car

Why Is The Priceof An Auto Not Correct

toyota prius being sold at venice toyota is not a certified vehicle as you say. you must pay the dealer $700.00 to have the car vertified. there is also a $999,00 dealer fee added to the cost of the...

My listing that I put up on Sunday, still has a "PROCESSING" label on it? Why would this be? The payment went through for the extra exposure.

Hello, I have 2016 Toyota Prius can not control temp. No matter how low I try to put temp.down it sties very high, changed climate control unit but still the same anybody know what it could be thank...

Is Is Acceptable To Use A Non-Toyota Battery In A Prius?

I had to replace my Prius 2016 batter which was dead. AAA replaced it with a non-Toyota brand battery. Toyota now tells me that they only recommend using a Toyota-branded battery. Is it acceptabl...

Where can I purchase a small tire for 2016 toyota prius 15inch, it doesn't come wiwth one, all I find is 16 inch. thanks