For a carryover year, the 2016 4Runner gets some really nice upgrades with cell-phone navigation and an increase in towing capacity. 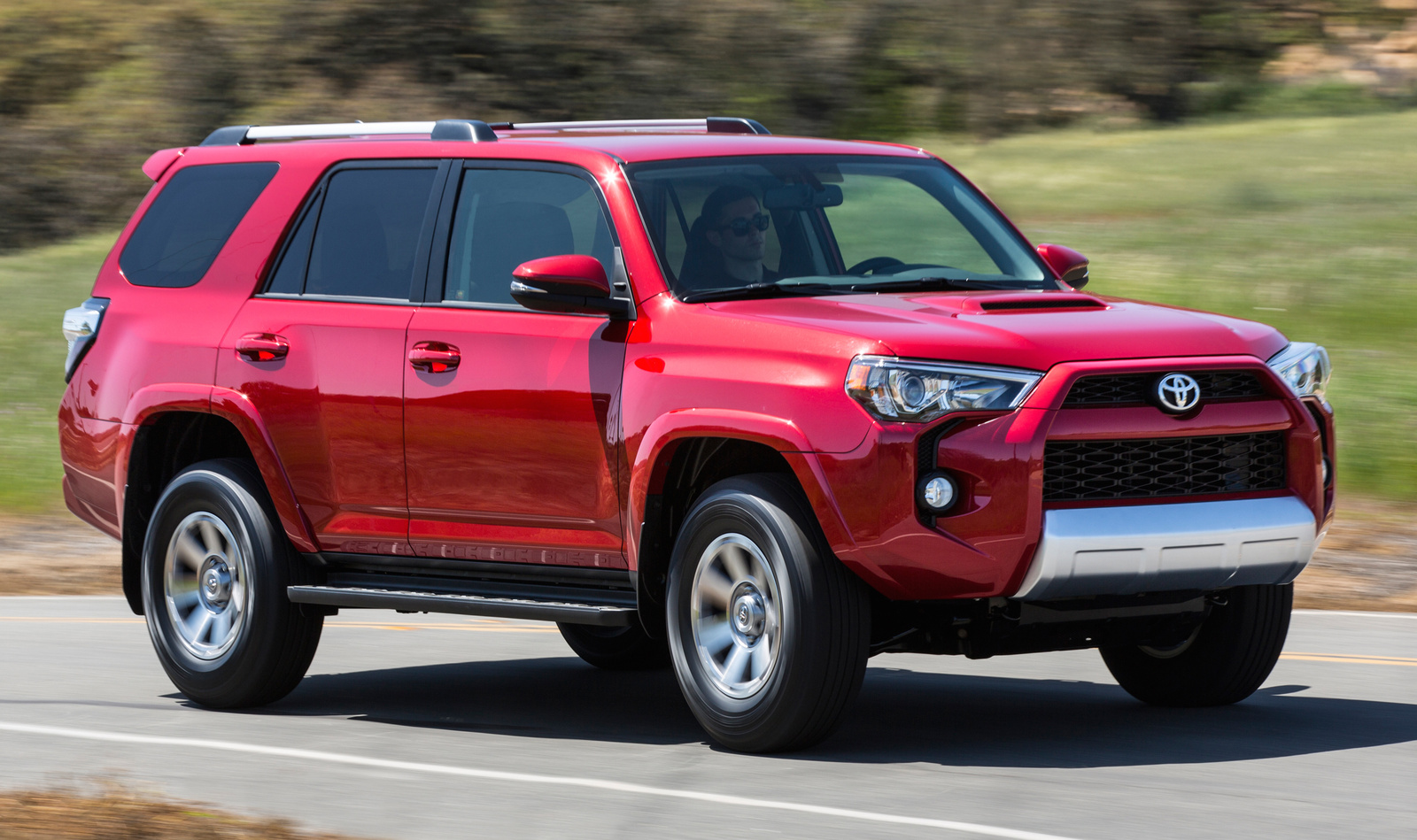 When crossovers rule, room is scarce for true off-road SUVs. Still, the 4Runner has managed to soldier on during times when fuel economy and plush rides are more coveted than the ability to drive over stuff. If those align with your preferences, look elsewhere. But if a truly off-road-capable SUV is something you’re looking for, the 4Runner is a stunning example in an ever-shrinking field. 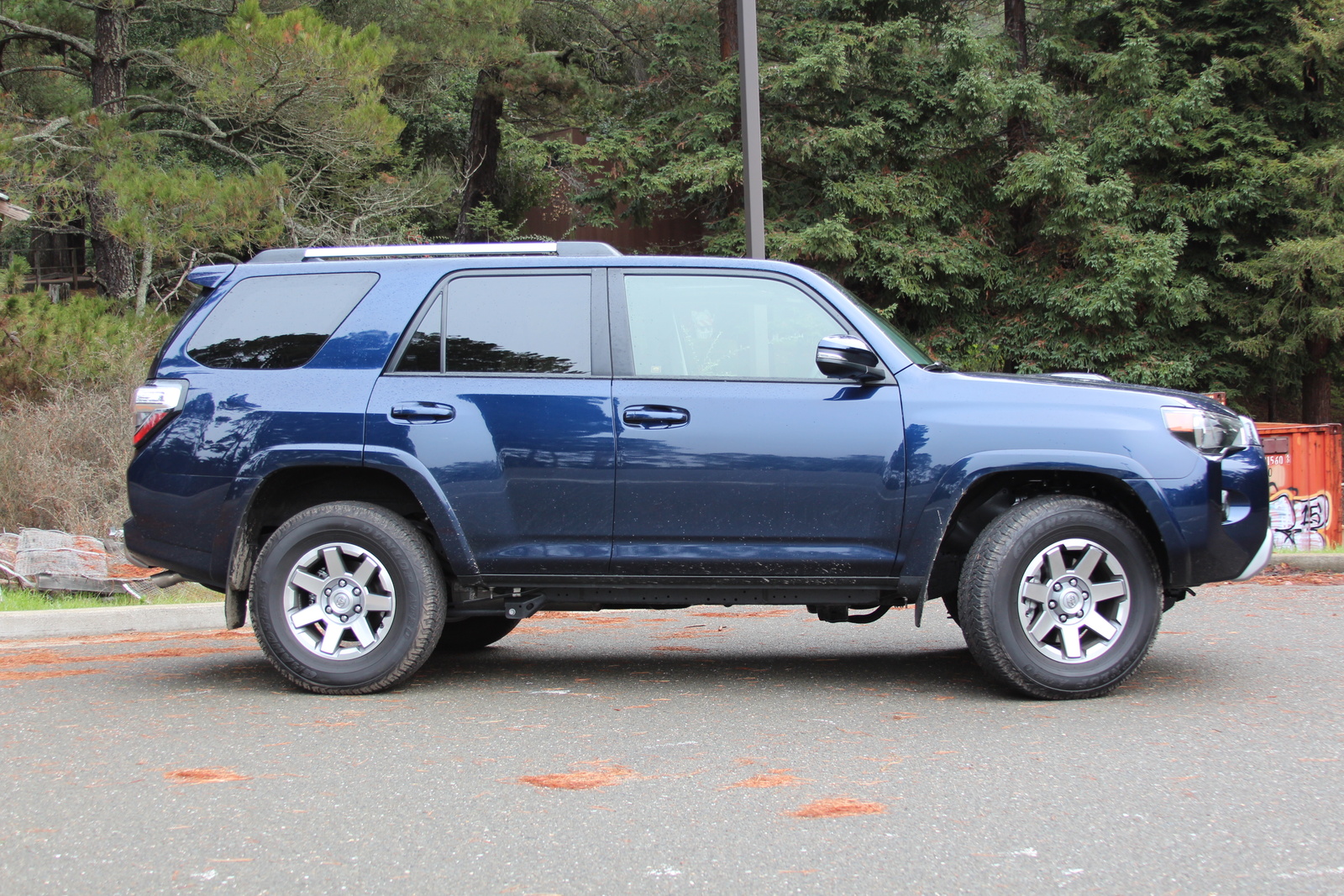 The evolution that took us from SUV to crossover was so gradual, it’s easy to forget what trucks used to look like. Thankfully, the 4Runner is still around to remind us. With an aggressive stance and ride height, stock skid plates, and all the useful off-road tech that’s left off most other offerings of late, it’s a refreshing look backward to a time when trucks offered more than just spacious interiors and room for all your groceries.

That’s not to say that the 4Runner hasn’t evolved itself a bit. At least in the style department, it’s managed to keep up with the times, while still retaining a certain snarky appeal with its bulging proportions and quirky face. An upturned grille brings to mind the face of a Boxer pup, with exposed skid plates up front and frame rails from the side. It looks nearly retro, with lines that are starting to look a bit classic in the same way that old Jeep Cherokees can bring long-lost childhood camping trips to mind. Inside it’s much the same, with styling that offers no surprises yet no disappointments. It’s a true testament to purpose — knowing what it’s there to do, and going directly after that goal.

Toyota offered me a week with a 4Runner in Trail Premium style, painted in Nautical Blue, one of the better colors I’ve seen of late. The base price for this trim starts at an MSRP of $39,095, and with a sliding rear cargo deck ($350), the kinetic dynamic suspension system ($1,750), and $750 of “Keep It Wild” promotional savings, the walkaway price here was $41,345 with a $900 delivery charge. 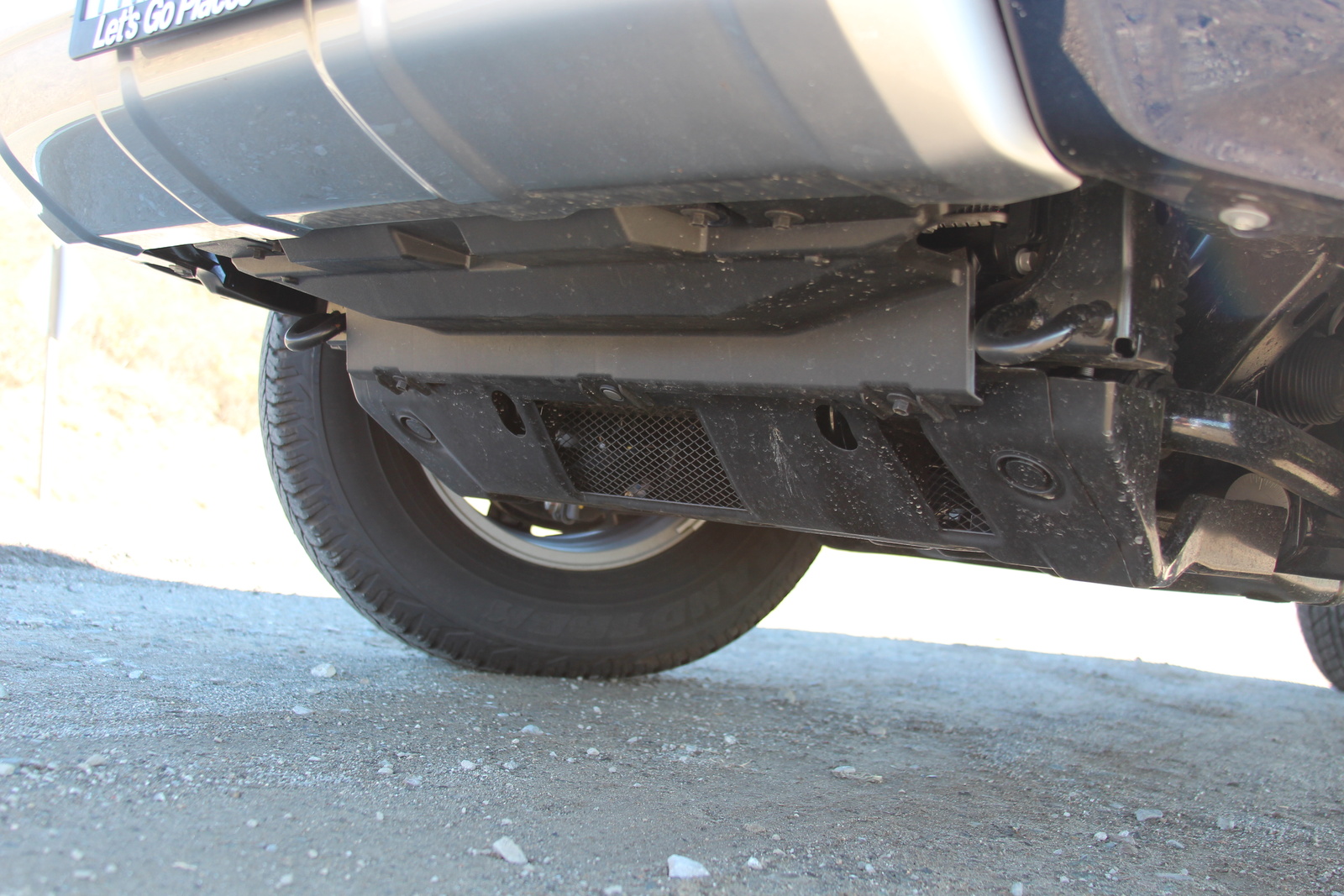 Ah, the performance of a big, 4.0-liter V6. It’s a rare offering today, but make no assumptions — this isn’t the same style of truck V6 you already know. Here, variable valve timing and double overhead cams mean peak torque of 278 lb-ft doesn’t arrive until 4,400 rpm, with a maximum of 270 hp not showing up until 5,600. Believe it or not, this engine can actually rev. It’s not the stump-ripping power you might expect, and even with a 300-pound increase over last year, maximum towing capacity is only 5,000 pounds, but that’s not what the 4Runner was built to do. Instead, this truck would prefer to go over obstacles rather than through them.

With that in mind, the 4Runner Trail edition comes with standards like crawl-speed control, a locking rear differential, and variable terrain modes to make sure its mission is accomplished. Crawl-speed control acts as a type of low-speed cruise control with 5 speed settings, allowing you to concentrate on steering when climbing over rocks or logs or whatever else you decide needs to be traversed. And for anyone who’s spent time trying to drive through slippery conditions, watching one wheel spin while another does nothing is a familiar frustration — and the 4Runner's locking rear differential will eliminate it. Finally, the variable terrain modes will vary throttle and suspension response based on what you’re driving over - mud, sand, rock, etc.

And to make sure things aren’t too unmanageable at speed for those who’ve forgotten what a truck really rides like, the kinetic dynamic suspension system (KDSS) does a great job of decoupling sway bars for increased wheel articulation over the rough stuff, while keeping things nice and tight at speed to fight the body roll that so often plagues tall SUVs.

Really, it’s a function of ride height coupled with the weight of a full frame underneath — things you won’t find on a modern “SUV.” That means increased off-road capability, but there are drawbacks. You won’t find the plush, comfortable ride most crossovers offer, and there’s a serious penalty to economy — the 4Runner manages only 17 mpg city/21 highway, for a combined rating of 18 — but these shouldn’t be your focus if you’re looking at the 4Runner. There are, very plainly, better alternatives out there if these aspects will deter you. But make no mistake, the 4Runner is a bouncy affair at speed, although the KDSS system does a really nice job of minimizing that body roll. 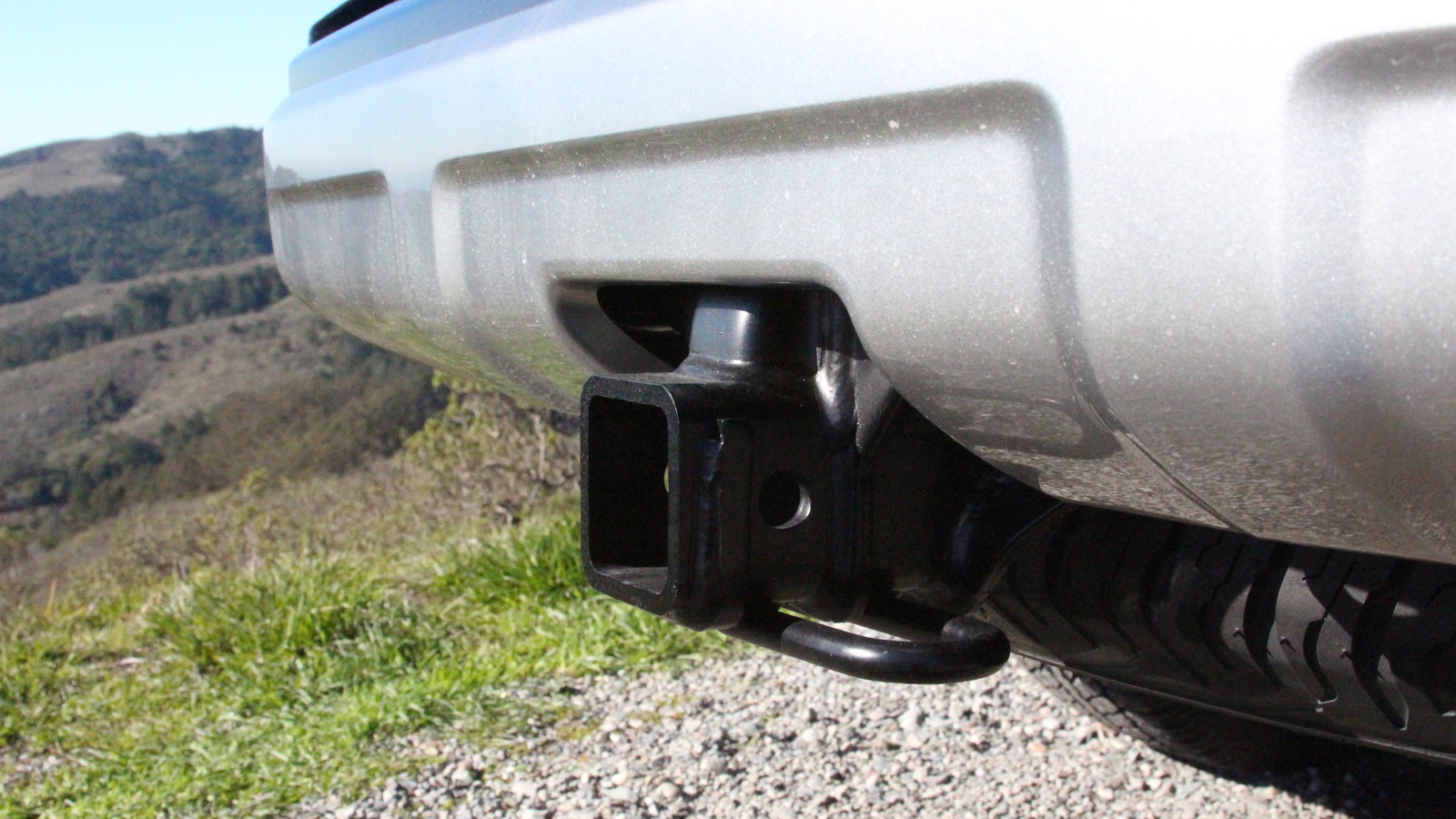 The 4Runner is very capable and looks good, too. Right out of the showroom it’s a competent contender, but decked out in Trail Premium trim, it’s got some extra ability with a bit of additional luxury. Here you get the upgraded Entune system that comes with integrated cell navigation for 2016, plus satellite radio. Toyota’s SofTex heated front seats come in a synthetic leather option that offers increased durability, perfect for the less-than-pristine conditions they might encounter. A moonroof opens wide, and a sliding rear window is a fun and practical addition.

There are small tech bits you wouldn’t expect here, like a rear-view camera and rear LEDs, heated mirrors with integrated signals, and an auto-dimming rear-view. More than that, the interior is stylish, and I’d say even more so than the Platinum-trimmed Tundra I rode in the week before — a shocking revelation given the extra $10K it’d take to drive away in the Tundra. The glossy black trim is much nicer than the metal-painted plastic in the Tundra, although the glossy black scratches if you look at it cross-eyed.

My only complaints are that the 6.1-inch screen for the Entune system looks puny, especially in an infotainment console that feels a bit “stuck on” as it protrudes awkwardly from the console. Also, the large knobs for the controls feel a bit cheap here, and the versions used in the Tundra would look much better. 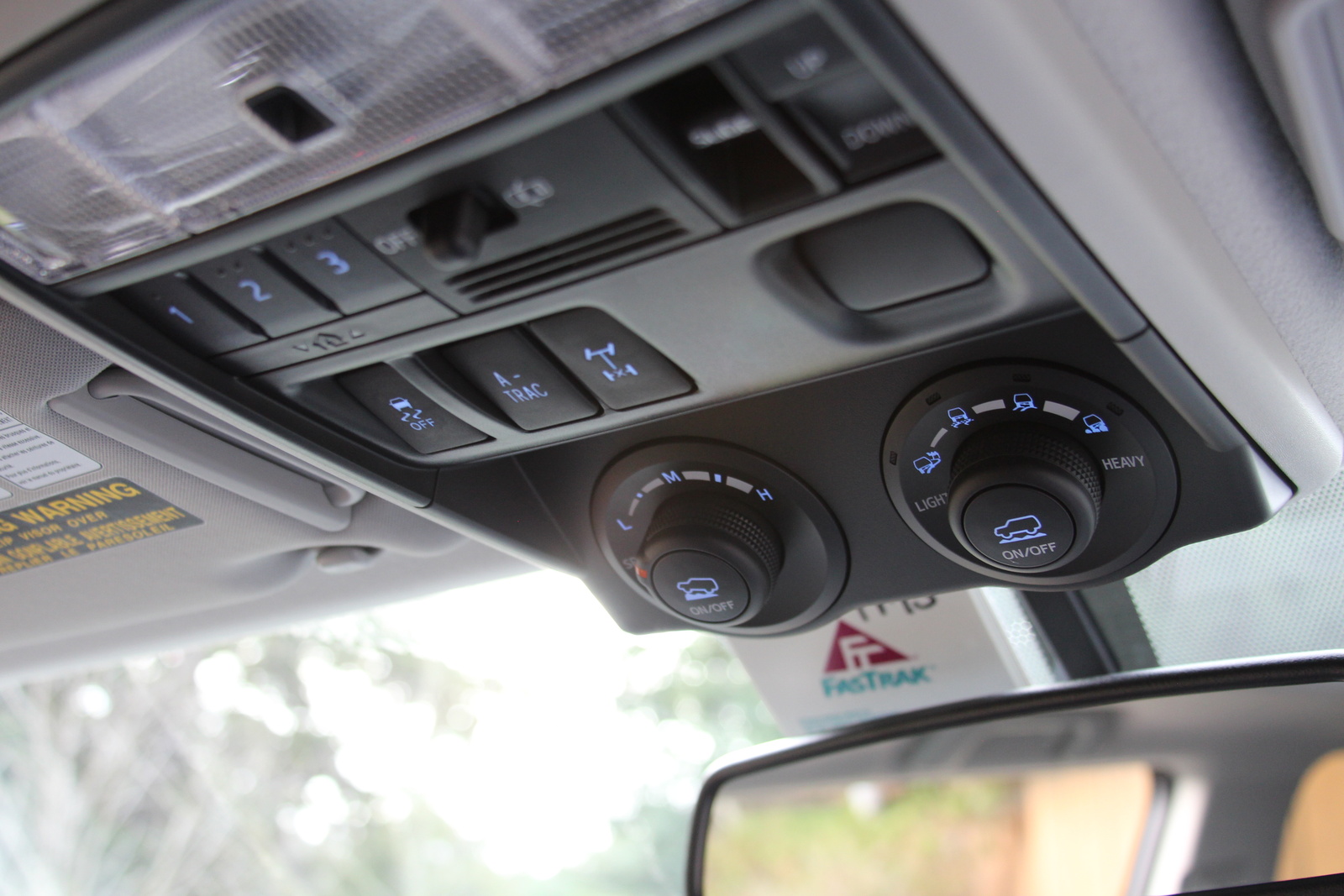 The upgraded Entune system’s new application of cell-phone navigation means you won’t have to deal with the issues surrounding the location search. Here you can apply your preferred platform and never have to worry again. Otherwise the Entune system is easy to use, although a bigger screen would be a big help, especially for bigger fingers. The backup camera is a nice addition here, especially when reversing off-road, as roots and stumps and rocks hide just as easily from side mirrors as dogs and toddlers and tricycles. And the off-road tech speaks for itself. For the price, I’d like an upgraded stereo, however — perhaps something designed for operation with the tailgate open?

The tech prize has to go to the KDSS here, however. It made cornering nearly enjoyable here, whereas most big SUVs end up feeling quite “boaty” through the twisty bits. Instead, the 4Runner ran with poise and confidence through the turns. 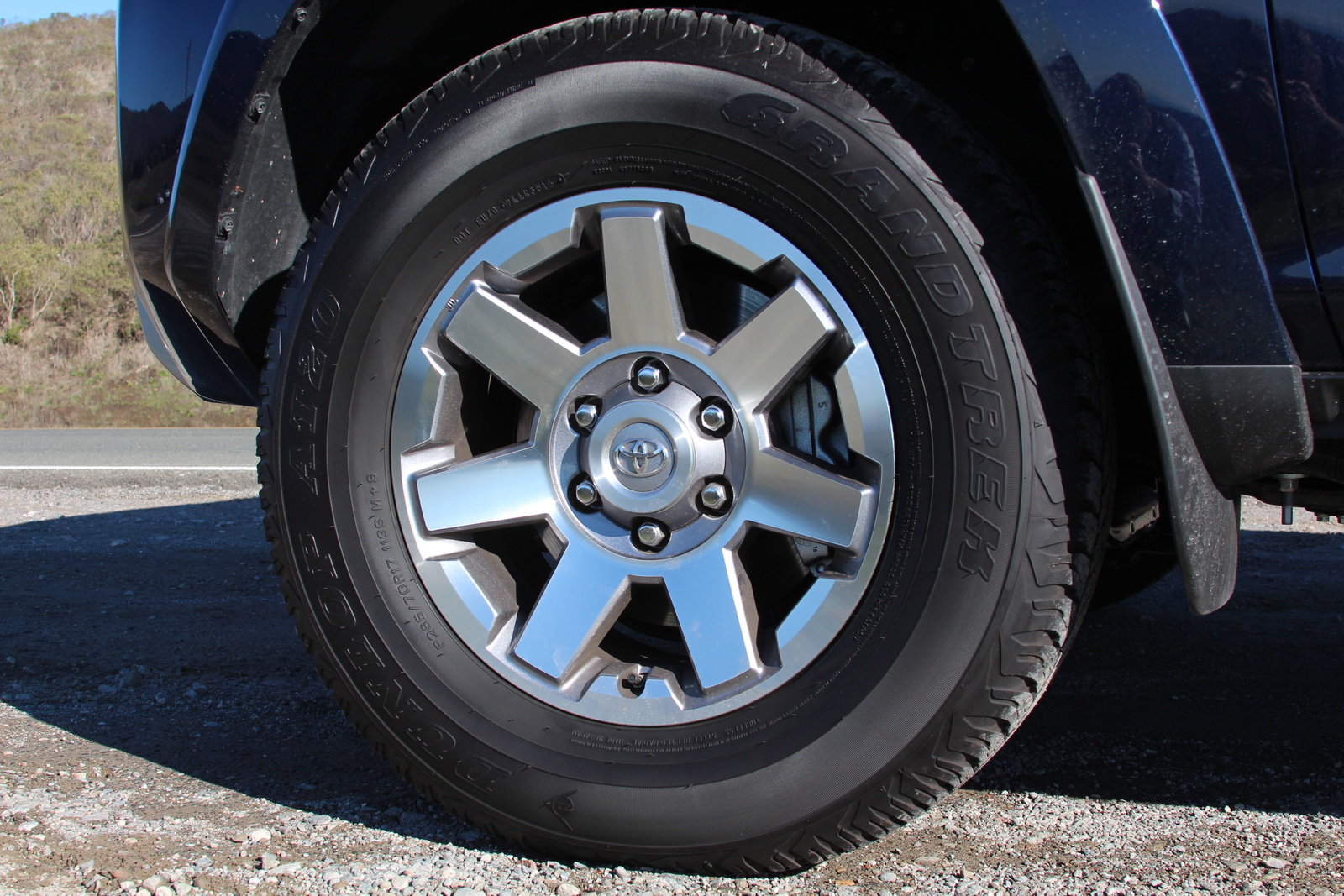 One of the other benefits of modern crossover design is safety. While the National Highway Traffic Safety Administration awarded the 4Runner a 4-star overall safety rating, rollover tests earned only a 3-star rating, with frontal and side tests getting 4 and 5 stars, respectively. Not the best showing, unfortunately.

But with stability and traction control, 4-wheel ABS with electronic brakeforce distribution and brake assist, the 4Runner can come to a stop from 60 mph in about 132 feet, which is short compared to crossover competitors, but expected here with a nearly 5,000-pound vehicle. Side knee and full-length curtain airbags join the usual fronts for protection in a rollover. 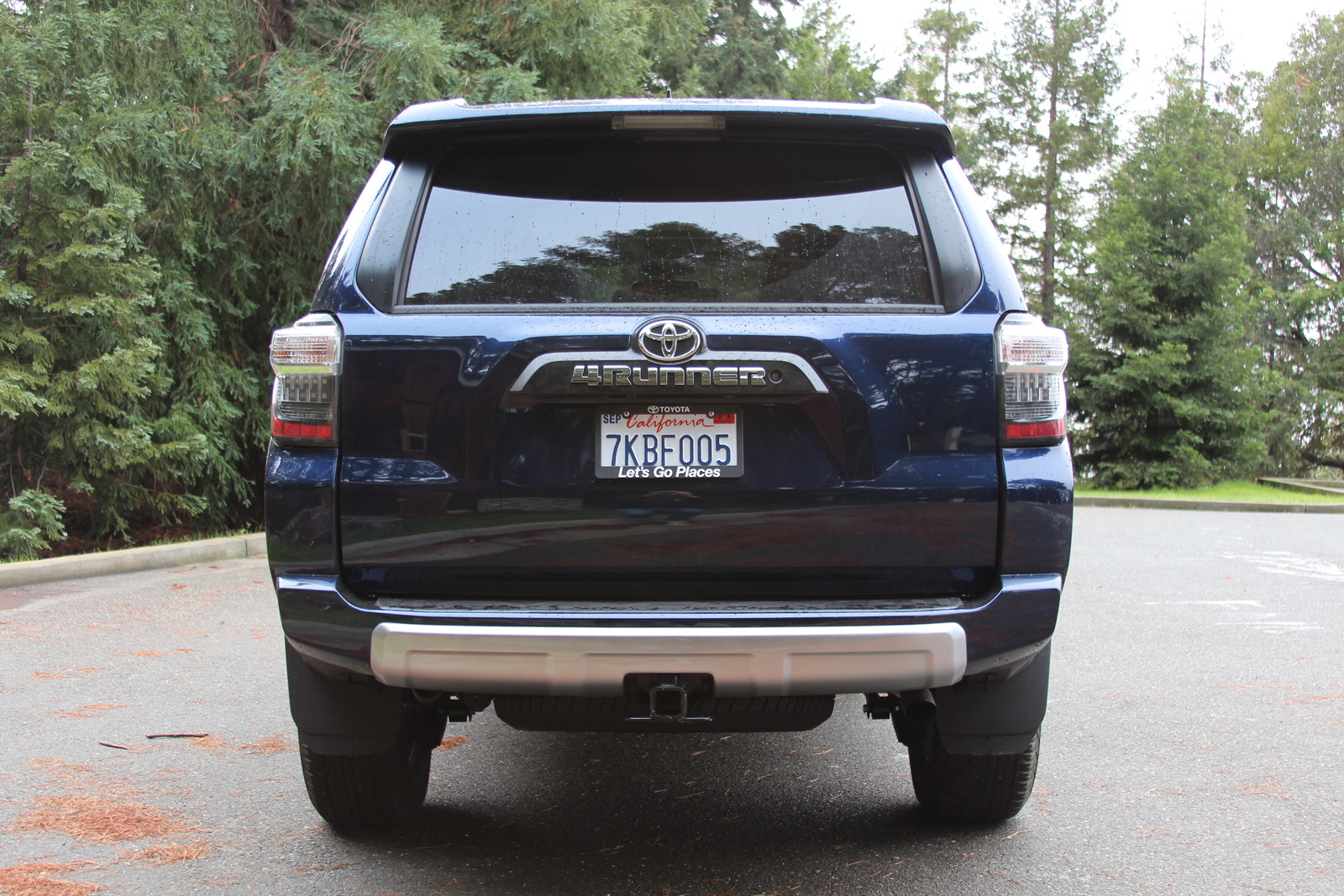 When it comes to off-road capability and third-row seating, there aren’t many options available. This means cost-effectiveness is a relative discussion. For a true SUV that can still crawl over the rough stuff, it’d be hard to do better than the 4Runner, and you can certainly do worse. For any of the few options available, you’re going to pay more. That makes the 4Runner a solid choice, especially considering it's one of Kelley Blue Book's 2016 Best Resale Value Overall award winners.

To put this in perspective, the resale potential for a 4Runner puts it near the Jeep Wrangler, long a legend in this category. Plus, if you hurry and are a member of the military, you can get a $1,000 cash bonus until the end of February 2016.

GuruRLL3 48,007 Just bought it but it was in a field of itself as far as I was concerned with anything I looked at!

Users ranked 2016 Toyota 4Runner against other cars which they drove/owned. Each ranking was based on 9 categories. Here is the summary of top rankings.

Have you driven a 2016 Toyota 4Runner?
Rank This Car

What Will Cause A Steering Wheel Shimmy At 60-65mph Other Than Tires, Rims,...

What Are Valid Car Fees?

What is a HoS POM fee?

I posted a picture with the listing of my car of the warrantee information that is transferable to a new owner should someone purchase my car. I got an email today saying the photo was removed bec...

An interested buyer has agreed to a negotiated price and wants a test drive. Should I have him meet at my home?