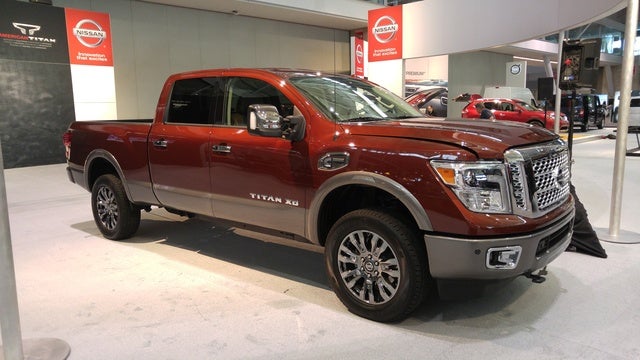 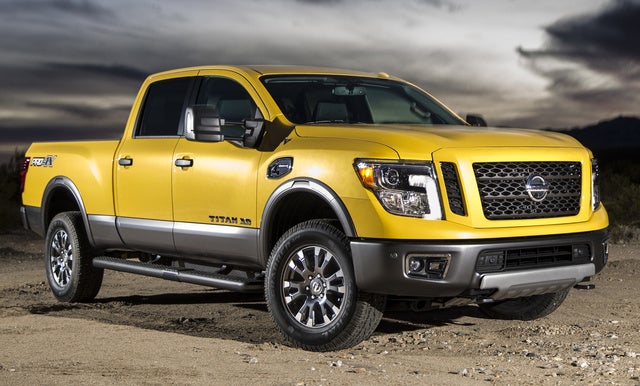 Tired of being low man on the pickup-truck totem pole, Nissan introduced, at the 2015 Detroit Auto Show, its 2016 Titan light-duty hauler to take on the reigning champs from Ram, Ford, and Chevy. This 3-, 5-, or 6-passenger next-gen Titan workhorse will still offer the home-owning handyman a low-priced leaf-loader, but for serious construction jobs, Japanese automaker Nissan presents a viable alternative to the legendary domestics that have, since ancient times, dominated the full-size truck market. Furthermore, construction of and modifications to the brand new Titan will all be accomplished right here in the U.S.A.

To begin at the beginning, a new 5.0-liter Cummins turbodiesel V8 engine will power the Titan XD, Nissan’s newest addition to the Titan stable. Look for this state-of-the-art force-fed oil-burner to throw out 310 hp and an impressive 555 lb-ft of torque under the auspices of a brand new 6-speed Aisin automatic transmission that’s expected to manage all that oomph into delivering world-class pulling grunt and fuel economy. Designed to lug up to 12,000 pounds of trailer using an optional and new-for-2015 built-in gooseneck towing system, the newly instituted turbodiesel V8 would seem to indicate that the term “light-duty” may soon have be dropped when describing this debuting Titan semi-heavyweight.

Speaking of debuting, Nissan assures the world that the highly touted and now-top-shelf XD will be the first trim level of this new generation of Titan pickups to be offered later in the 2015 model year, but that’s not the only upgrade to this venerable pickup’s gene pool. A pair of wheelbases are also scheduled to return to the Titan lineup, as well as the 3-passenger, 2-door regular cab configuration, joining the presently offered King Cab and cavernous Crew Cab options. Both of the latter are 4-door 5- or 6-seat versions, with the King Cab presently sporting old-style rear-opening back passenger doors, and the Crew Cab sporting 4 independently opening doors. Additionally, a trio of bed lengths, including a 6.6-foot standard bed, a 5.6-foot short bed, and a 7-foot long bed, are also on tap for 2016 Titan editions.

All this brings up the fact that, except for the debuting XD iteration, further modifications to Titan trim levels have yet to be announced for 2016. Presently this bulk-bearing Nissan’s lineup includes the base S, the midlevel SV, the off-road-ready PRO-4X, and the once-top-shelf SL. All 2016 trims, no matter their monikers, will undoubtedly benefit from a number of styling improvements, including a chromed grille and some tweaks to the sheet metal, headlights, taillights, and front and rear fascia. Additionally, a bunch of improved techno-goodies are also on tap for the upcoming model year, including a new rear-view camera system with grids and positioning lights to ease the challenges of trailer hookups, a new around-view camera, and a debuting blind-spot warning system.

Furthermore, look for a brand new gasoline-burning V6 engine, managed by a standard 6-speed shiftable automatic transmission, to be offered as standard equipment in lower trim levels of the 2016 Titan lineup, while the tried-and-true gasoline-fired V8, thus far hinting of few if any noteworthy improvements to its peppy 317 hp and 385 lb-ft of torque, or its much-maligned 13 mpg city/18 highway mileage ratings, also gets reprised. Both the new V6 and the returning V8 Titan offerings will be introduced at some point following the grand entrance of the now-flagship XD.

In further distancing itself from the present Titan, Nissan has beefed up the frame on its lead pack mule for next year with a stronger chassis and heftier suspension components that should meld nicely with its turbodiesel V8 and upgraded transmissions.

To sum it all up, the Titan was once thought of as a toy for the part-time home-improvement impresario, but look for the 2016 Titan to muscle many of the truck-entrusted duties, not to mention some significant sales numbers, away from the dominant-for-now Big Three.

Have you driven a 2016 Nissan Titan?
Rank This Car