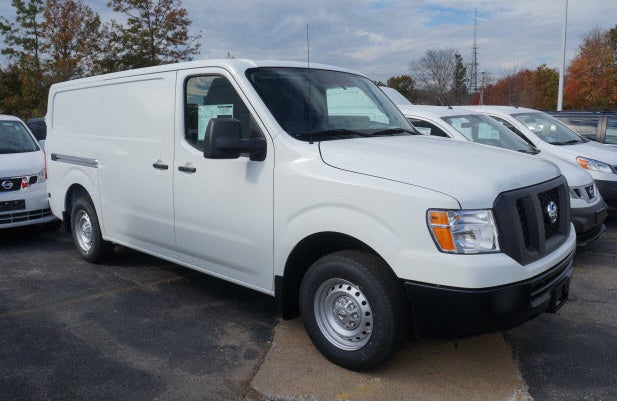 Not to be outdone in the lucrative full-size cargo van market, Nissan introduced the surprisingly capable NV Cargo some 4 years ago. For 2016, this 2-seat workhorse is again offered with two roof height options: the standard roof (4 feet 7 inches of standing room) and the high roof (6 feet 3 inches), which is available only on the 2500 HD and 3500 HD editions.

For 2016, the entire NV Cargo lineup gets side-mounted airbags and roof-mounted head-protection airbags with rollover sensors, along with a new exterior color choice, Cayenne Red.

There are also two engine choices. The base engine, standard on the 1500 and optional with the 2500HD, is a 4.0-liter V6 that puts out 261 hp and 281 lb-ft of torque when mated with the standard 5-speed automatic transmission. Standard power for the NV 3500 HD comes from a V8 that also uses the 5-speed automatic for 317 hp and 385 lb-ft of torque. The V8 is available on the 2500 HD trim and has a max towing capacity of 9,500 pounds. Because of its large size, the NV Cargo has no EPA mileage ratings, and all trims are offered in the traditional rear-wheel-drive (RWD) configuration only.

Considering the no-frills nature of the breed, the entry-level 2016 NV Cargo S is, not surprisingly, rather Spartan, boasting 17-inch steel wheels, cloth upholstery, a fold-flat passenger seat, and a tilt-only steering wheel. The S also offers standard manual air conditioning and an AM/FM stereo with 2 speakers and an auxiliary audio input.

Both the NV Cargo SV and SL trim levels return eligible for an available Technology Package that includes a 5.8-inch touchscreen display, Bluetooth-integrated NissanConnect smartphone apps for internet radio and Facebook access, a rear-view camera, and satellite radio. All trims can also be outfitted with a number of optional window configurations.

Standard safety equipment aboard the 2016 NV Cargo--now supplemented by the standard side-mounted and head-protection airbags--includes 4-wheel antilock brakes (ABS), and a remote antitheft alarm in the SL trim.

Have you driven a 2016 Nissan NV Cargo?
Rank This Car