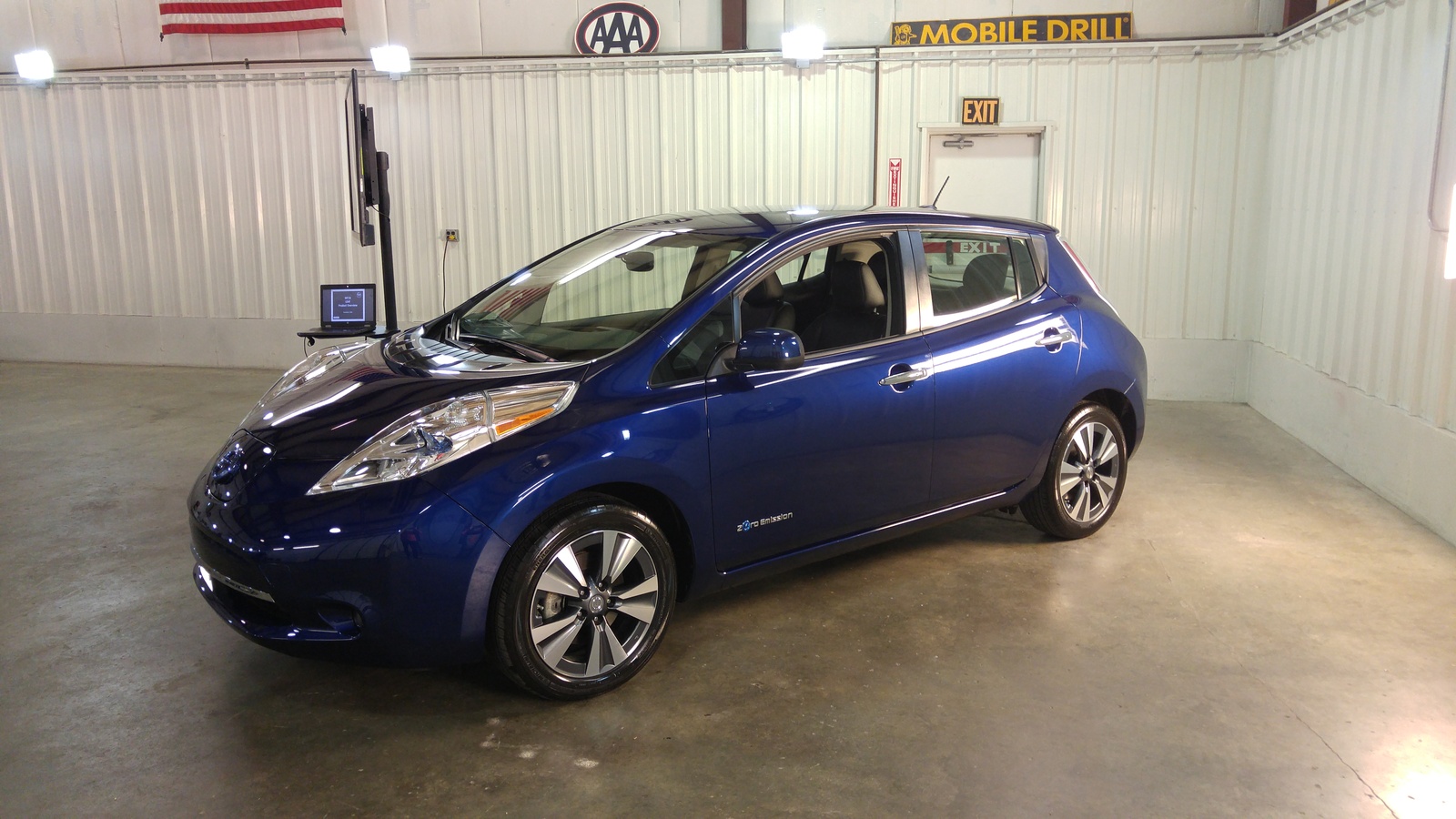 With 6 years under its belt, the Nissan Leaf is getting rather long in the electric tooth. Competitors have populated the automotive landscape with all-electric options matching the Leaf for style and substance, so Nissan has upped battery capacity for the 2016 SV and SL trims for a full 104 miles of range—a 23-mile increase over that of the old battery pack—and added a quick-charge port for the mid-level SV. 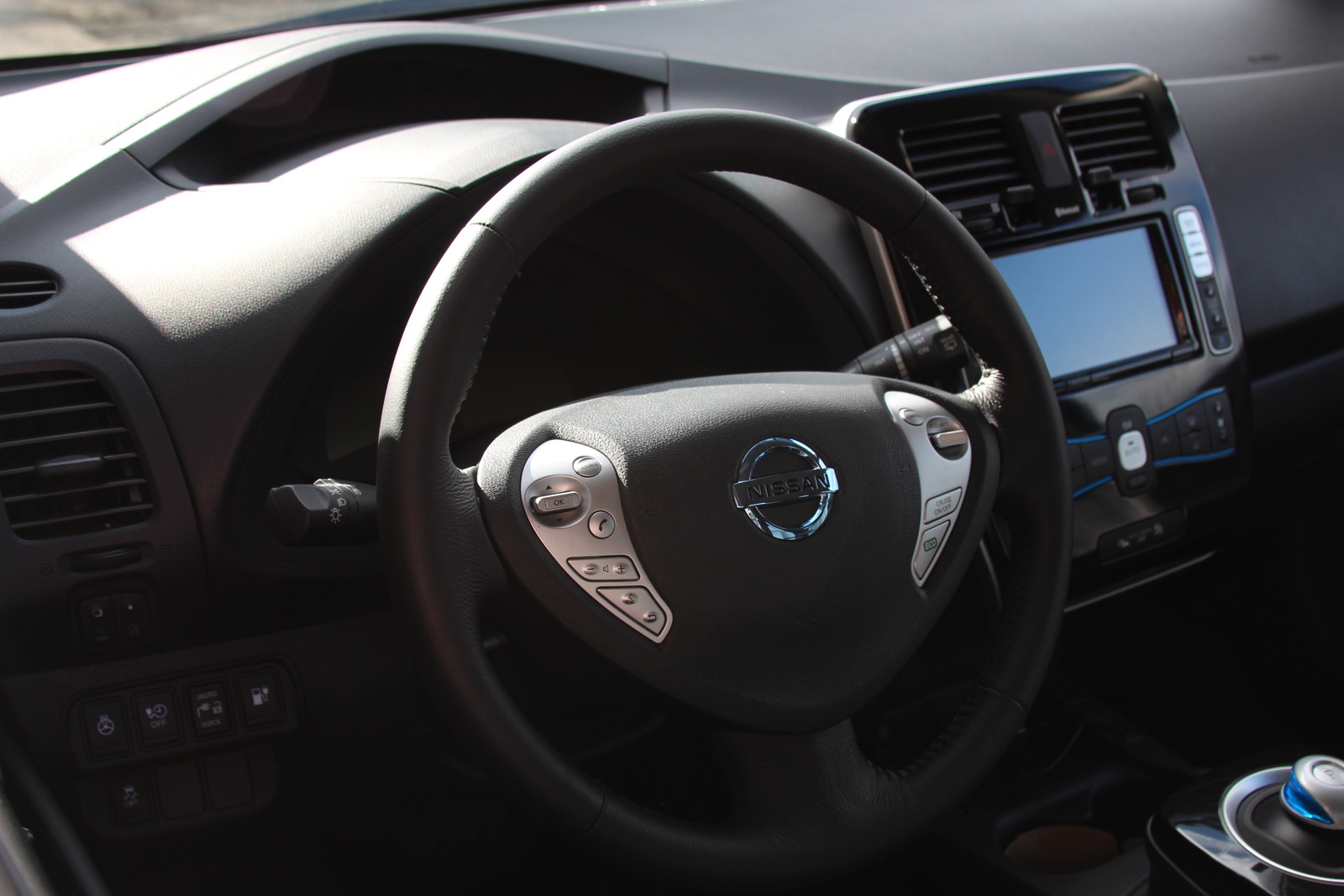 The Nissan Leaf has sold more than 200,000 units in its 6 years of silently stalking the world’s asphalt, and about half those sales have been in the U.S. In many ways when people think electric vehicle, they think Leaf. Still, vehicles need updates, and 6 years without a major redesign is usually enough to spell death for a car, especially one that’s supposed to be as forward-thinking as an electric vehicle. By upping battery capacity from 24kW to 30kW, Nissan has updated the most important part of any EV, providing increased utility to combat the looming spectre of “range anxiety.”

But base S trims are still stuck with the old battery and its 84-mile range, although they do get a larger touchscreen for 2016. Things at the base level are a confusing list of upscale and cost-cutting options: 16-inch steel wheels, keyless entry and ignition, cloth upholstery, heated mirrors and seats, automatic climate control, and a 5-inch touchscreen with Nissan Connect and a rear-view camera. The biggest letdown here is the 3.6kW onboard charger, which will take a sluggish 20+ hours to recharge the battery on a standard 110-volt outlet. Install a smart charging station at a 240-volt outlet and you can cut that charge time down to 8 hours. Optional for the S and standard for the SV and SL are 6.6kW onboard chargers as well as a quick-charge port. Plug the 6.6kW into a 240-volt outlet and you can have a charged Leaf in just 5 hours, or use the quick-charge port and it can charge the battery to 80% of total capacity in just 30 minutes.

My time with the Leaf was spent in a top-tier SL trim ($36,790) with the automatic LED headlights, leather upholstery with heated seats front and back, foglights, and a solar panel Nissan claims will help power accessories. It also came with the optional Premium Package ($1,570) to add a 360-degree above-view parking camera and a 7-speaker Bose stereo. With $180 floor mats and an $850 destination charge, the final price for my test car came to $39,390. 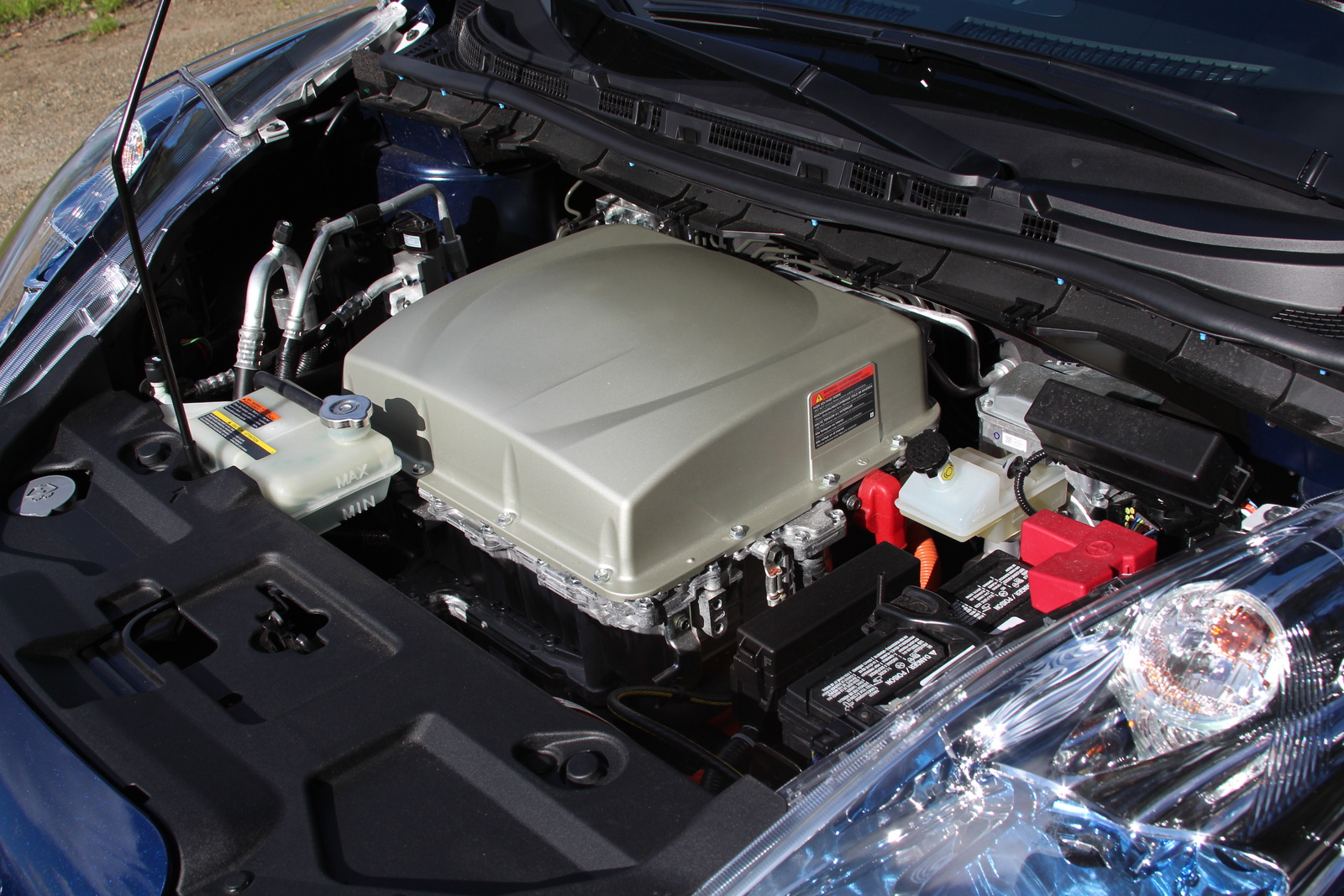 With the Leaf, performance needs to be considered in regard to both acceleration and range. While electric cars tend to excel at the former and fail to impress with the latter, it’s actually the opposite case here. The usually brisk shot to 60 in an electric car takes more than 10 seconds in the Leaf, about the same as a Nissan Versa. But with the increased-capacity battery, the already impressive range of the Leaf has improved by 23%, delivering miles well in excess of the needs of the overwhelming majority of drivers.

The new quick-charge port that comes standard for SV and SL trims and is optional for the base S is a real game-changer with regard to usability, providing a predicted 80% battery charge in just 30 minutes. On one trip, I depleted the battery about 60 percent, plugged into a 480-volt quick-charge station and came out about 30 mins later to a fully charged battery. That said, some real-world testing has been unable to replicate a full 80% charge in the same period. But for the ability to provide most of your range in the time it takes to stop for food, the quick-charge port has the power to negate much of the anti-electric sentiment out there.

The placement of the Leaf’s batteries under the floor gives it some poise through turns, although acceleration at speed is nothing to get excited about. In fact, the Leaf can fool you into thinking it’s faster than it really is with all the electric torque it can deliver. Planning for passing is a must here, as the Leaf struggles somewhat to accelerate past 30 miles per hour. That's sad, considering acceleration is usually an EV’s strong suit. 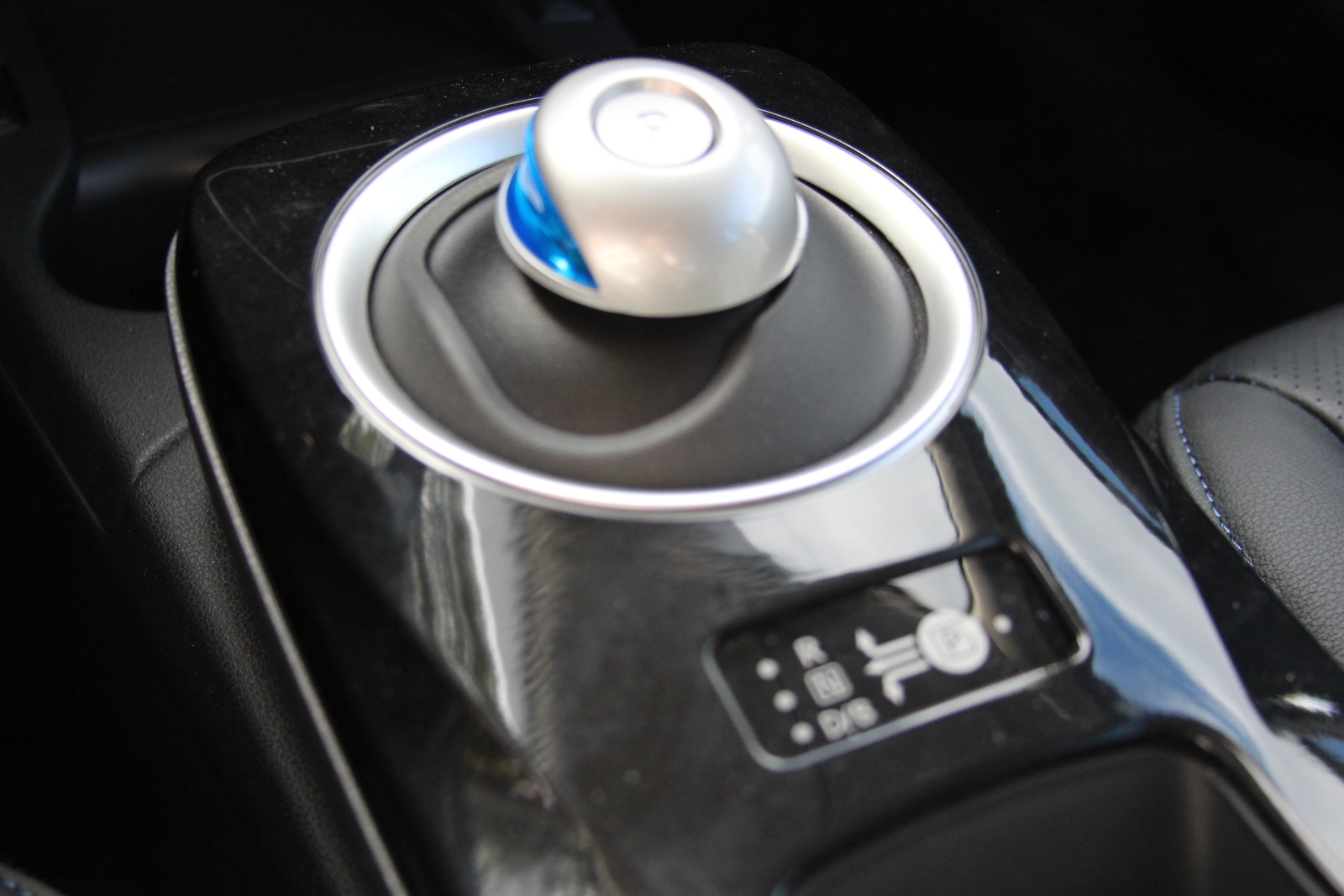 Beyond the aging design and increased capacity, what really defines the Leaf is room. Twenty-four cubic feet in the trunk is an astonishing figure for an EV, and dropping the rear seats will increase that to 30. It’s all thanks to storing the batteries in the floor, rather than letting them eat trunk space. And while the batteries provide increased range this year, physically they stay the same size, so none of that impressive space is impacted.

However, the battery-under-floor design does lead to a slightly strange seating position that has you rather high and always feeling as though you’re leaning slightly forward. It’s not uncomfortable, and at 6 feet, 4 inches, I still had plenty of headroom, but it still felt a little off every time I sat down. I was always searching for one more adjustment that might make things more comfortable.

The touchscreen and surrounding console look a bit like they were stuck onto another car’s dash, almost like someone upgraded a gas car to electric sometime in the not-so-distant future. But I do like the smaller console and display screen above the main gauges. It allows you to see pertinent info like speed without having to glance down too far. That screen also houses an “eco meter” that’ll award you pieces of trees to encourage ecological driving habits. Yes, it becomes a fun game, and you don’t have to drive painfully slowly to gain any headway.

However, there are some caveats that must be brought up with regard to the quick-charge port. Nissan warns that frequent use of the port—more than a few times per week—will result in increased battery degradation of about 10%. Additionally, the company does not recommend charging the battery beyond 80%, which cuts out most of the additional range added with the 30kW pack. You can set up your Leaf to automatically cut off charging at 80% for increased battery life, but be aware that this will cut more than 20 miles off your total range. 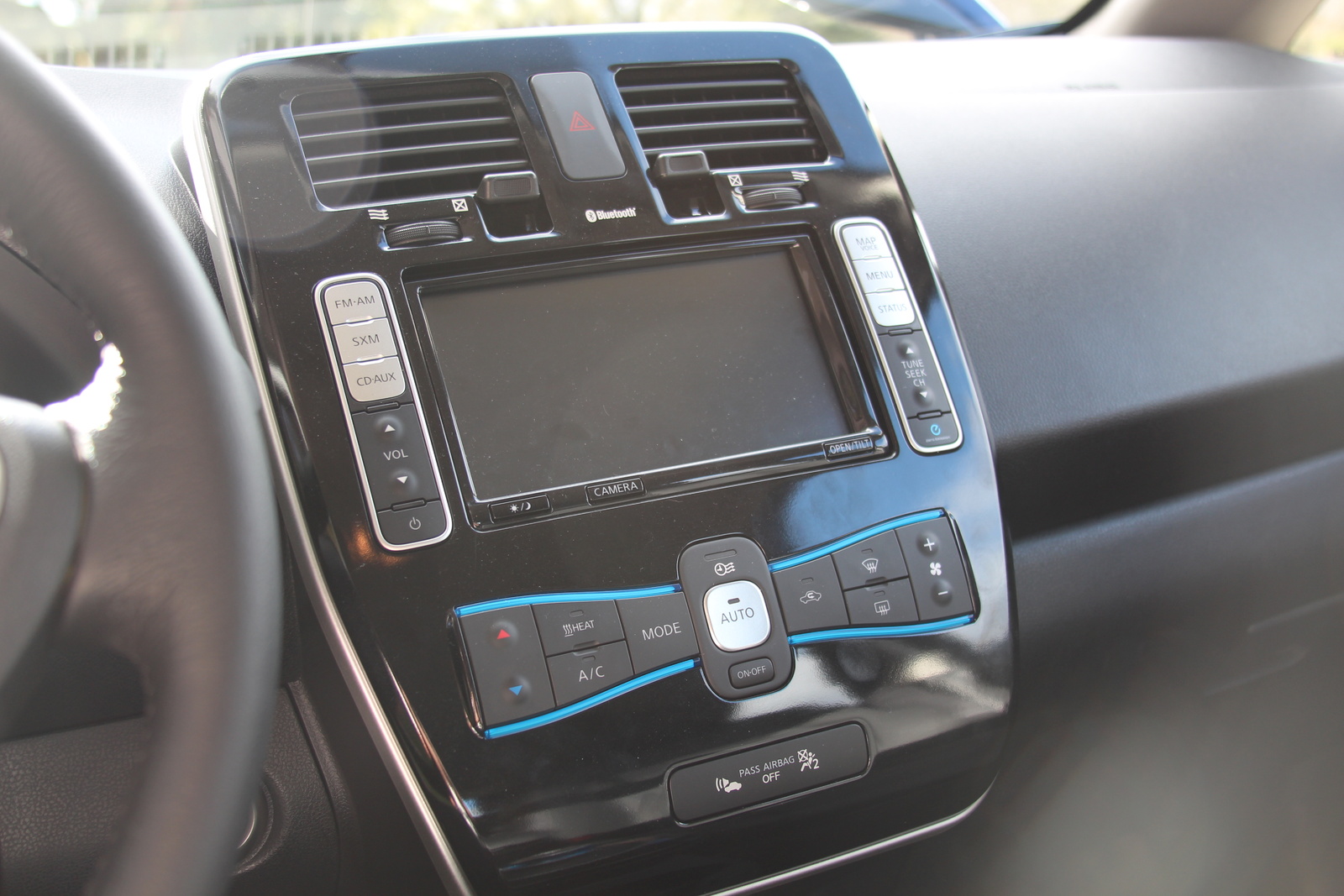 Obviously, technology is important in an electric vehicle, and the standard recipe here is to load your EV with upscale features, knowing that government rebates and incentives will cut the price substantially.

Interestingly enough, that’s not really the case here. The Leaf isn’t spartan with regard to technology, but strangely absent are tech safety features like blind-spot monitoring and lane-departure and frontal-collision warning systems. All Leafs do come standard with a rear-view camera, and SV and SL trims offer an optional 360-degree, above-view camera parking system that comes with the 7-speaker Bose stereo in the Premium Package, but it’s hardly necessary, as the Leaf isn’t exactly plagued with blind spots.

Nissan Mobile Connect provides limited app integration for Facebook, Pandora, and iHeart Radio, as well as Sirius satellite and HD Radio, and the system works well, though it’s falling behind without options such as Apple CarPlay and Android Auto to fully mirror smartphones. Nissan Connect EV telematics allow you to monitor and control climate and charging systems for maximum efficiency, but beyond initial setup, it starts to feel too much like doing homework for my car. Honestly, I’d prefer everything to just work properly without the need for me to micro-manage.

The top-tier SL also comes with a rear-spoiler-mounted solar panel that Nissan claims will help take the load off accessory-battery depletion. In reality, it’s only good for producing 5w when in direct sun (think high noon only) and will trickle-charge the 12-volt battery, not the drivetrain batteries. It’s a nice gesture, but it’s adding a lot of tech for no measurable benefit. I’d rather they just left the system off and saved us the money. 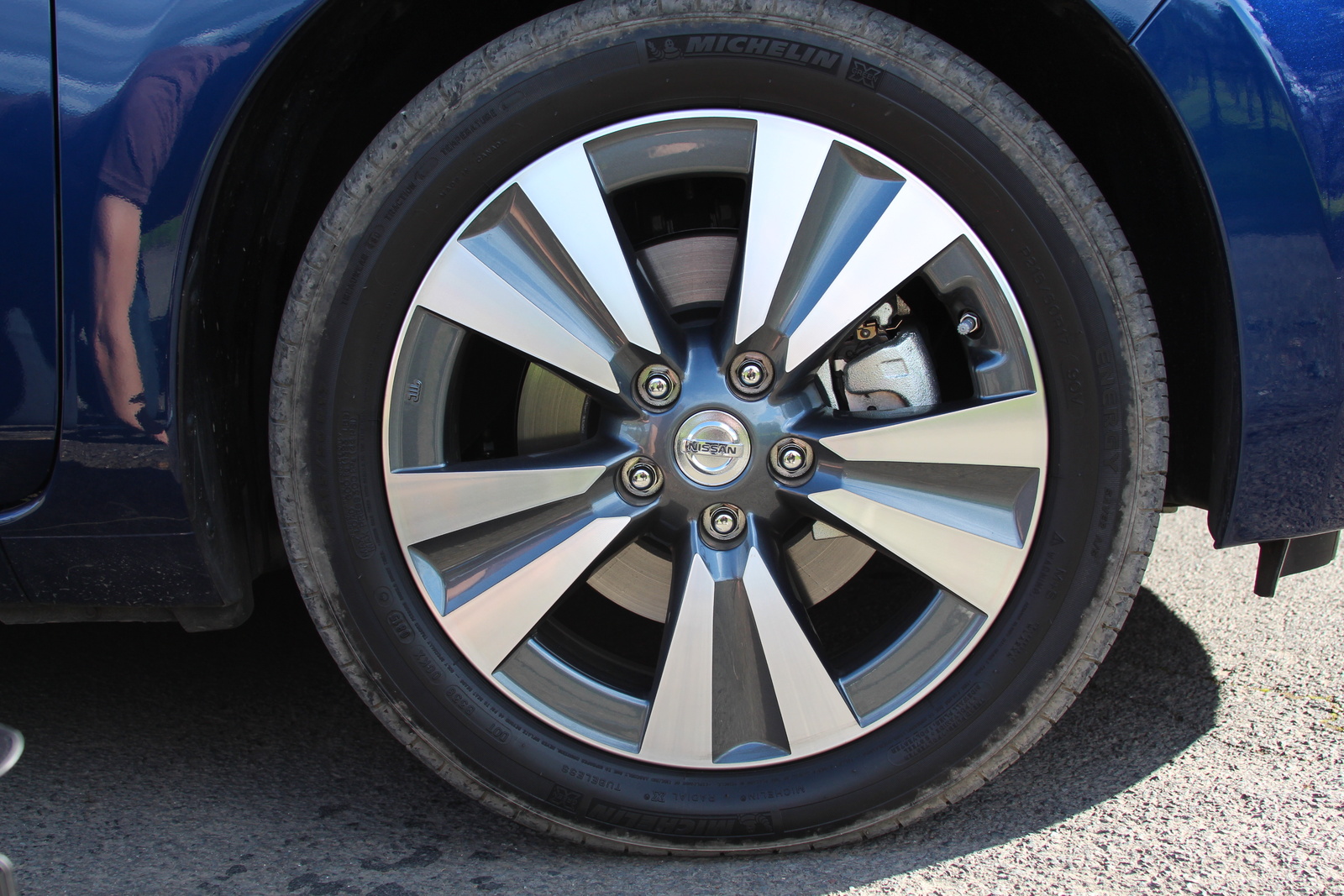 A lot of people take safety in an EV for granted. It’s the newest of new vehicles, so it must be the safest, right? Unfortunately, that’s not the case here. While front, front-side, and full-length curtain airbags join the usual suite of antilock brakes and traction and stability control, the Leaf managed only 4 out of a potential 5 stars from the National Highway Traffic Safety Administration, and the Insurance Institute for Highway Safety gave the Leaf a Poor rating in small-overlap crash tests, the organization’s lowest rating.

But all other tests earned the highest rating of Good, and stops from 60 mph happen in just over 120 feet, despite low-rolling-resistance tires, an average distance for the class, electric or not. 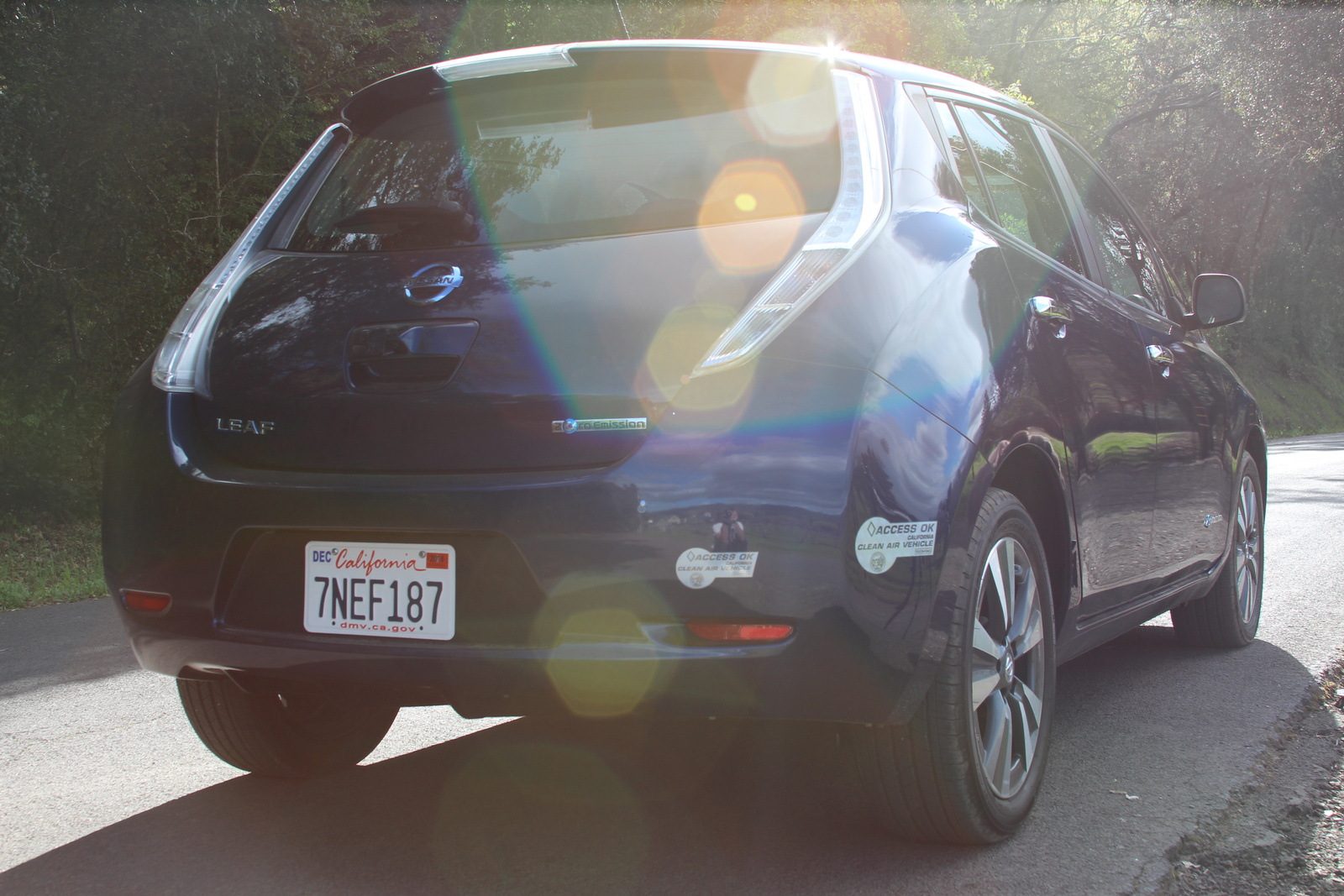 Obviously, there are savings to be had with an electric vehicle. The EPA estimates a fuel savings of more than $6,000 over 5 years of ownership. However, the SL trim I drove cost just shy of $40k, which is a substantial price for what is essentially a compact hatchback.

Thankfully there are many rebates and incentives, including $7,500 from the federal government and additional state rebates ($2,500 from CA, in this case). That can bring the walkaway price for a top-tier SL to under $30k and for a base S trim to under $20k. Your main concern should be with whether or not you can get away with 80 or 100 miles of total range in a day, or if you have access to quick-charge ports that would extend that. Keep in mind, if you need more range a few times a year, the cost of a rental car could easily be offset by the fuel-cost savings the rest of the time.

Reliability has been rated as about average, but it must be noted that the Leaf has an impressive 8-year/100,000-mile warranty on its drivetrain, and for 2016 an additional battery warranty covers excessive loss in capacity. SV and SL trims with the 30kW battery pack get an additional 8-year/100,000-mile capacity warranty, while S trims with their 24kW battery pack get a 5-year/60,000-mile capacity warranty.

Mike Helpful review with great info. One note: none of the reviews I saw of the 2016 Leaf mentioned that it doesn't have a spare tire. Something to consider if you are planning a weekend trip.

Users ranked 2016 Nissan LEAF against other cars which they drove/owned. Each ranking was based on 9 categories. Here is the summary of top rankings.

Have you driven a 2016 Nissan LEAF?
Rank This Car

Can Cargurus Arrange Delivery Of A Vehicle

WHy don't you include cars that I have actually physically seen that are within ten miles of my home and in the same zip code? A 2016 Nissan Leaf is in Oak Park Heights/Stillwater MN and has been li...