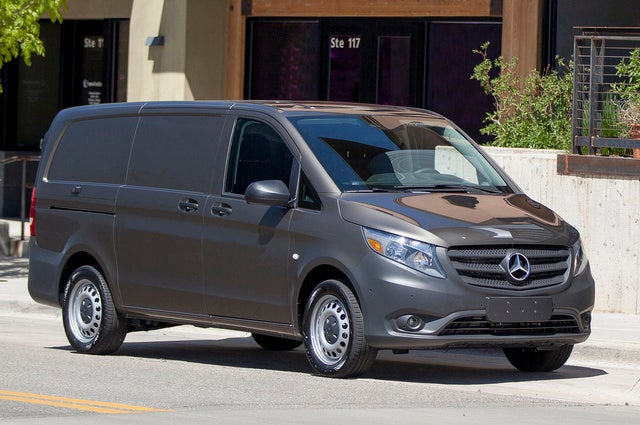 When a Sprinter is just too big and too expensive, but, say, a Ford Transit Connect is a little too small, then maybe the debuting 2016 Mercedes-Benz Metris Cargo van is the right fit your small business. This 2-seat midsize cargo van has been around in foreign markets for almost 20 years, branded as the Vito, but the upcoming year finds it ready to move stateside (with some modifications).

Be advised that the Metris Cargo offers a bit less luxury than your typical Mercedes-Benz product, including its Sprinter sibling, and it doesn’t have the high-roof option of most competing work vans. But the new Metris does pack a peppy turbocharged powerplant, and a number of reviewers have found it to be surprising agile in corners. And this comes on top of a hefty 186 cubic feet of cargo room. Note that the Metris will fit nicely in your average sized garage and has a distinctly value-oriented MSRP.

The Metris Cargo comes in a single Base trim and is delivered only in front-wheel-drive (FWD), with no all-wheel-drive option. There’s also a passenger version that’s covered in a separate preview. One plus that the Vito version of the Metris Cargo may have over the U.S. model is a fuel-saving turbodiesel engine that, for the foreseeable future, remains unavailable in North America.

What the new Metris does offer is a 2.0-liter turbocharged inline 4-cylinder powerplant managed by a standard 7-speed shiftable automatic transmission, putting out 208 hp and 258 lb-ft of torque. Mileage estimates aren’t yet available, but expect them to at least match most other vans of similar weight and dimension. And an available Eco Stop/Start package ensures even better mileage numbers by automatically shutting down the engine at a stop and restarting it when the accelerator is pressed. With the optional trailer hitch installed, the 2016 Metris Cargo is capable of towing up to 5,000 pounds--try that in your typical high-roof work van!

While the 2016 Metris Cargo gets the Euro-styling and distinct starred grille of its fellow Mercedes-Benz family members, the resemblance stops there. This is a rather Spartan workhorse outfitted with 17-inch steel wheels, a chrome-less exterior, and trailer wiring, while the cabin sports basic standards like cloth upholstery, power door locks, tilt-wheel steering, and air conditioning. Look for the 2016 Metris Cargo to offer an AM/FM stereo with 5 speakers, standard steering-wheel-mounted paddle-shifters, and Bluetooth hands-free calling.

You can, however, trick the Metris out with a slew of options, many of which come in packages. These include a driver’s side rear sliding door (with back barn doors instead of a liftgate), a backup chime, upgraded interior and exterior accents, and upgraded seats. Additional packaged options also include a rear-view camera, GPS navigation, 17-inch alloy mirrors, cruise control, heated power-adjustable outside mirrors, automatic climate control with an electric heater booster, and a 4.2-inch driver information display. Further available extras include a beefed-up alternator and extra battery for retrofits, and heated front seats.

Expect the 2016 Metris Cargo to go on sale in October of 2015, challenging the Sprinter, Ford’s Transit Connect, Ram’s C/V Tradesman, and Nissan’s NV 200 SV for the fleet owner’s hauling dollar.

What's your take on the 2016 Mercedes-Benz Metris Cargo?

Godsotherson1 Contrary to your post, Metris is a rear wheel drive van.

Users ranked 2016 Mercedes-Benz Metris Cargo against other cars which they drove/owned. Each ranking was based on 9 categories. Here is the summary of top rankings.

Have you driven a 2016 Mercedes-Benz Metris Cargo?
Rank This Car