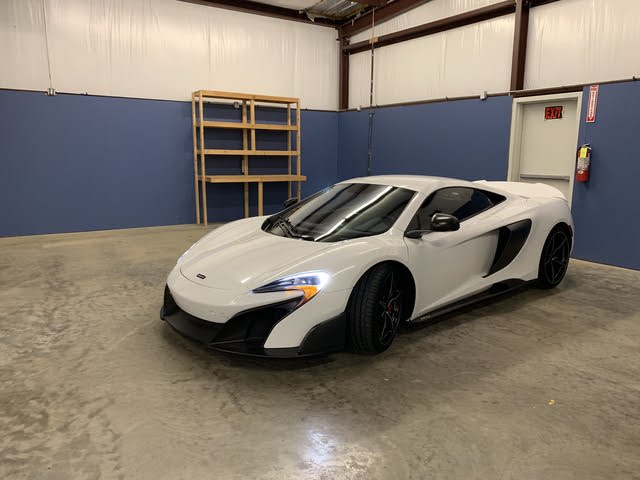 Looking for a Used 675LT in your area?

Anything McLaren puts on the road is pretty phenomenal, but even among that distinguished company, the 2016 675LT is something special. McLaren has called it “the lightest, most driver-focused, most exclusive series-production McLaren supercar ever built," with “more power, less weight, more precision” than anything else in their Sports Series production range. Inspired by the epic long tail version of the F1 GTR that McLaren made way back in 1997, the 675LT (Long Tail) is a stripped-down, more powerful, track-focused version of the 650S and was introduced at this year’s Geneva Motor Show. An all-new model, the 675LT's first run is limited to 500 units and McLaren has reportedly sold all of them already. Not to worry, though, because a 675LT Spider is on its way as well. And the good news about the Spider is that because McLaren’s carbon fiber MonoCell chassis is so stiff, no added reinforcement (aka weight) was needed to maintain the car’s rigidity, which is normally the case with convertible sports cars. That means the Spider will offer basically the exact same performance as the 675LT Coupe, but with the wind running through your hair (or helmet).

The 675LT is available in five standard colors (Silica White, Chicane Grey, Napier Green, Delta Red, and McLaren Orange), but an optional Club Sport Professional Pack will let you choose from three more (Storm Grey, Titanium Silver and Onyx Black). More importantly, the Club Sport Professional Pack gets additional track-focused equipment like a titanium roll hoop, a 4-point racing harnesses, and a fire extinguisher, as well as carbon fiber front wing end plates, side intakes, wheel arches, and wing mirrors. Below that is a normal Club Sport Pack that includes everything but the extra carbon fiber bits and the exclusive paint colors. The 675LT is also available standard with McLaren’s Track Telemetry App, which monitors things like lap times and vehicle dynamics. Three cameras--one in each bumper and another in the cabin headlining--are optional extras for those who want to record footage of the car on the road or track.

What McLaren did in creating the 675LT was take the already very potent 650S and then crank it up to 11. McLaren’s M838TL, the 3.8-liter twin-turbo V8 used across the entire McLaren range, has been tuned to make an evil 666 bhp and 516 lb-ft of torque (25 bhp and 16 lb-ft more than the regular 650S) that now breathes out of titanium exhausts, while the 7-speed dual clutch transmission has been reprogrammed to shift gears in half the time. The car should go from 0-60 mph in 2.9 seconds, 0-125 in 7.9 seconds, and its top speed will be a claimed 205 mph. Its front splitter is 80 percent larger, the rear airbrake is 50 percent larger, the car has 40 percent more downforce, and the engine mounts are 300 percent stiffer.

The 675LT has a dry weight of just 2,700 pounds, thanks to a lighter chassis and seats and even a thinner windshield. It comes standard with forged alloy wheels (19 inches up front and 20 in the rear) mounted with Pirelli P Zero Trofeo R tires, carbon ceramic brakes, upgraded suspension that borrows bits from the McLaren P1 hypercar, and a steering rack that is 10 percent faster than the 650S and actually even faster than the P1, according to McLaren.

The weight loss program undertaken by the 675LT is evident in the interior as well, since both the carpet and the air conditioning have been removed--but it’s still a pleasant space, with Alcantara upholstery and satin-lacquered carbon trim throughout. And if you can’t stand the summer heat, even in your track-focused McLaren, air conditioning can be retrofitted as a no-cost option. As a car priced in the neighborhood of $100,000 more than the roughly quarter-million-dollar 650S on which it's based, the 675LT won’t be crash tested, and as a track-oriented car with barely road-legal tires, general road safety was not a primary concern in its design. This isn’t a commuter car. What it is is one of what will probably be several special limited models based on McLaren’s Sports Series range, created as the company aims to keep its road-going products fresh and interesting. Since most of McLaren's range looks almost exactly the same to the casual observer, any small attempt to differentiate between models and add some novelty is an important step for the company. Deliveries to the 675LT Coupe's first 500 lucky customers have started, and the 675LT Spider (also limited to 500 units) will arrive next summer.

Randymardis Awesome!! The 3 things one can never have to excess: Love, money & HORSEPOWER!

Users ranked 2016 McLaren 675LT against other cars which they drove/owned. Each ranking was based on 9 categories. Here is the summary of top rankings.

Looking for a Used 675LT in your area?