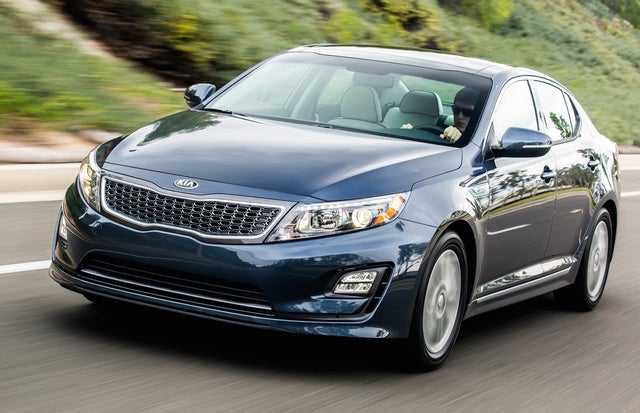 No midsize car lineup would be complete without a fuel-sipping hybrid trim, and Kia’s 2016 Optima Hybrid offers proven technology. With an EPA-rated 40 mpg highway, the Optima is a large car that returns the same fuel economy on the highway as a modern compact sedan. And the 2016 Optima Hybrid has a lot more going for it than just great fuel economy, as we'll explain.

Starting with the outside, the 2016 Kia Optima Hybrid features a classy, mature look designed under the supervision of Peter Schreyer, a world-famous stylist who was once with Audi and is now a top executive with Hyundai/Kia. One of the most notable aspects of the Kia Optima Hybrid’s design is the “Tiger Nose.” The front grille looks exceptionally good in a class known for drab designs. The Optima Hybrid continues its good looks from the side and rear as well. This vehicle has no bad angles.

Inside, the 2016 Kia Optima Hybrid is downright upscale. An available 10-way power-adjustable driver’s seat and panoramic sunroof are just two examples of how Kia opted to raise the stakes in the midsize hybrid class. An acoustic windshield and side windows help keep the cabin extra quiet. The Optima is also large for the midsize class with a roomy rear seat.

The 2016 Optima Hybrid uses a proven 2.4-liter 4-cylinder engine with a parallel electric drive system. Combined, the gasoline engine and the gutsy 47-hp electric motor produce a peak 199 horsepower. However, drivers will notice the system's 235 lb-ft of torque more, due to the electric motor’s ability to provide maximum torque at startup. The 2016 Optima Hybrid is not a plug-in. It runs on gasoline but can recapture energy using the regenerative braking system. Unusual for a hybrid, the front-wheel-drive 2016 Optima Hybrid forgoes the typical continuously variable transmission for a 6-speed automatic. Those drivers put off by the odd feeling of CVT transmissions will find the shifts of the Optima Hybrid familiar and pleasant.

The fuel-saving measures used by Kia in the 2016 Optima do not stop in the engine bay. The front of the Optima Hybrid has special vents to make it more aerodynamic. Kia also replaced some of the steel elements in the car’s front structure with aluminum to save weight. The Optima Hybrid’s standard wheels are lightweight 16-inch alloys with low-rolling-resistance tires. The optional 17-inch rims have super-low-rolling-resistance tires.

Prices for the 2016 Kia Optima Hybrid will start at about $27,000 for a base LX. Most of the cars at dealers will have the $1,460 Hybrid Convenience Package, which adds UVO telematics, a 10-way power driver's seat, LED headlights, and a rear-view camera. The $33,000 2016 Optima Hybrid EX adds in-dash navigation and heated seats. The $2,380 Technology Package will add a panoramic sunroof, rear cross-traffic alerts, a back-up warning system, and blind-spot detection. The White Interior Package adds white leather seating with offset stitching and a high-gloss interior trim for $400.

The 2016 Optima Hybrid has not yet been rated by the Insurance Institute for Highway Safety. However, the 2015 was a Top Safety Pick. The vehicle scored Acceptable on the small frontal overlap test but is not available with forward collision prevention. Thus, it cannot earn the institute’s highest safety rating.

Buyers considering the 2016 Kia Optima Hybrid should know that its sibling car, the 2016 Hyundai Sonata Hybrid, has been fully updated for 2016. It features a new engine with better fuel economy, and there is also a new plug-in hybrid version capable of traveling an impressive 27 miles on electricity alone. We anticipate that the 2016 Optima Hybrid model will be replaced in late calendar 2016 with a new design having these desirable updates. Shoppers armed with this knowledge may find that dealers are unusually receptive to discounting the 2016 Optima Hybrid.

What's your take on the 2016 Kia Optima Hybrid?

Users ranked 2016 Kia Optima Hybrid against other cars which they drove/owned. Each ranking was based on 9 categories. Here is the summary of top rankings.

Have you driven a 2016 Kia Optima Hybrid?
Rank This Car

My 2016 kia optima wont start. It was running than shut off. All electric, nothing works

After reading all the previous post I realize that I am not alone in my angst with Kia in their digital clock issue dating back to February 6 at 3 AM I’m like oh my god so it must be a satellite is...