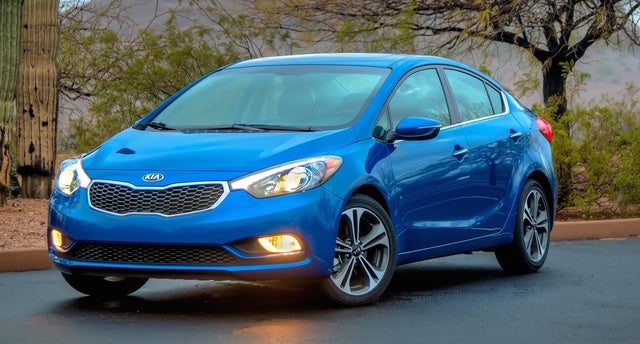 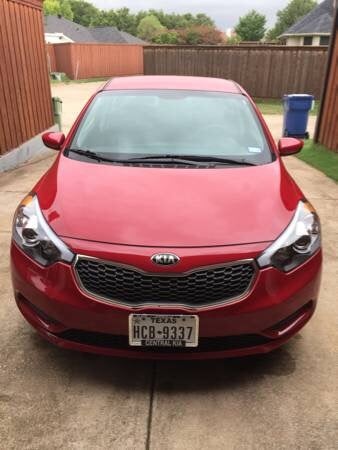 Kia builds on its reputation for value and family-friendliness with the 2016 Forte lineup. This compact 5-seater is again available as either a sedan or hatchback (Forte5), with its coupe variant (Koup) covered in a separate preview. Each edition remains surprisingly well-equipped and offers a number of high-end add-ons.

Despite all this, however, most reviewers consider the Forte just a tad less polished than most of its rivals. That being said, Kia’s Forte stable offers an attractive alternative to such perennial favorites as the Mazda Mazda 3, Honda Civic, Hyundai Elantra, and Volkswagen Golf and Jetta. The 2016 Forte also happens to be in dealer showrooms right now.

The Forte sedan comes in the base LX and EX trims, while the Forte5 hatchback is now available in a new LX trim, along with the returning EX and SX. The debuting Forte5 LX introduces a few added perks over those offered for its 4-door counterpart, allowing Kia to tout reworked standard features and options among the various trims for the upcoming model year.

Trunk space in the sedan versions remains a healthy 14.9 cubic feet, while cargo area in the 5-door Forte 5 is again listed as 23.2 cubic feet to the rear seatbacks (capacity with the rear seats folded remains unavailable). The Forte is again offered in front-wheel-drive (FWD) only.

Power for the Forte LX sedan is a 1.8-liter inline 4-cylinder (I4) mill, managed by either a standard 6-speed manual transmission or an available 6-speed shiftable automatic. Look for 145 hp and 130 lb-ft of torque from this base I4 with either transmission, and mileage of 25 mpg city/37 highway/30 combined with the stick-shift and 26/29/31 with the automatic.

The 2016 Forte EX iterations, along with the brand new Forte5 LX trim, get a 2.0-liter I4 engine paired solely with the 6-speed shiftable automatic. Expect 173 hp and 154 lb-ft of torque in the standard edition, with an available super ultra-low emissions vehicle (SULEV) version putting out 148 lb-ft of torque. Estimated mileage returns at 24/35/28.

The Forte5 SX comes powered by a turbocharged 1.6-liter I4 that throws down 201 hp and 195 lb-ft of torque, managed by either the 6-speed stick-shift or the 6-speed shiftable automatic. Look for 21/29/24 from this force-fed 4-cylinder when equipped with either transmission.

Trim-dependent options for 2016 Forte variants include the Premium and Premium Plus packages, which add GPS navigation (with 7-inch touchscreen), keyless entry and ignition, an auto-dimming rear-view mirror, a power sunroof, leather upholstery, a ventilated power-adjustable driver’s seat, LED taillights, and an upgraded gauge cluster. HD radio remains available as a standalone option on all trims.

Standard safety equipment aboard the 2016 Forte includes 4-wheel antilock brakes, traction and stability control, front side-mounted airbags, and front and rear head-protection airbags. Be advised, however, that reviewers point out a significant number of upgraded safety technology features that are not available on the Forte, such as blind-spot monitoring, lane-keeping assistance, automatic emergency braking, and adaptive cruise control. Be that as it may, the government gives the 2016 Forte its best 5-star rating for overall crashworthiness. The Insurance Institute for Highway Safety (IIHS) awards the Forte its highest rating of Good on all tests, except for the newly instituted small-overlap frontal-offset testing, where the Forte scored a next-to-worst Marginal rating. The Forte also earned a second-best IIHS Acceptable rating for the ease-of-use of its child-safety-oriented LATCH system. In fairness, however, there seem to be very few automobiles out there that score any better on the insurance industry’s recently introduced front-impact criteria.

Theresa I can't wait to purchase this car. It looks sharp and has the features that I'm looking for.

Users ranked 2016 Kia Forte against other cars which they drove/owned. Each ranking was based on 9 categories. Here is the summary of top rankings.

Have you driven a 2016 Kia Forte?
Rank This Car

I just got my car a 2016 Kia Forte 27,000 miles I was driving on the freeway and I can feel the back of my car swing left to right like it feel as its not driving straight i cant tilt my steering w...

When I crank my 2016 Kia Forte, I hear a rapid clicking type sound. The car will crank and run fine though. I don't hear the clicking sound every time I crank the car. Any info would help! It is...

315 views with 2 answers (last answer about a year ago)

WHAT CARGURUS DEALERS ARE IN LEXINGTON, TN?

I WOULD LIKE TO SELL A CAR IN LEXINGTON, TN

what vehicles interchange with a 2016 kia forte (radiator)

The Outside Temperature Is Not Working