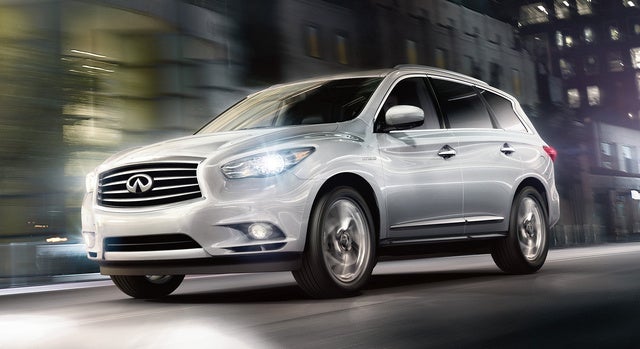 Although smaller compact cars are more likely to receive the green treatment, that treatment actually makes more sense for larger vehicles like the 2016 Infiniti QX60 Hybrid. Small cars are already fuel efficient, and large crossovers usually are not. The nearly full-size QX60 Hybrid’s drivetrain shows much-improved fuel economy over its non-hybrid counterpart while also avoiding any notable reduction in power and torque.

The 2016 Infiniti QX60 Hybrid's 3 rows offer a seating capacity of 7, with a 3-passenger middle row. Versatility, space, and safety are the hallmarks of the best crossovers, and the QX60 Hybrid does extremely well in all of those regards. Add its impressive EPA-estimated combined mileage of 26 mpg in either all-wheel-drive (AWD) or front-wheel-drive (FWD) configuration, and the QX60 Hybrid begins to looks like a clear leader of its class.

The drivetrain inside the QX60 is unique. Lexus and Toyota hybrid crossovers add energy-recapturing and electric-motor drive systems to V6 engines, but Infiniti opts for a supercharged 2.5-liter 4-cylinder coupled with an electric motor and 15kW lithium-ion battery. Total output for the hybrid powerplant comes to 250 hp and 243 ft-lb of torque, very close to the 256 hp and 248 lb-ft of torque generated by the non-hybrid QX60.

As mentioned above, the QX60 Hybrid sees excellent mileage, especially compared to the conventionally powered QX60; the 6-cylinder QX60 AWD gets 22 mpg combined, while the the QX60 Hybrid AWD gets 25 mpg city/28 highway/26 combined. Infiniti recommends premium fuel for the conventional QX60's V6 but rates the hybrid for use with regular unleaded fuel, meaning the hybrid's fuel economy is even better than its mpg number alone would suggest.

Hybrids and other green cars benefit owners and the environment in terms of more than just fuel efficiency. According to the EPA, the QX60 Hybrid AWD not only uses 15% less petroleum than the QX60, but its EPA smog rating improves one point, to a 6 out of 10. The QX60 Hybrid AWD also generates 342 grams per mile (gpm) of CO2, compared to 404 gpm from the V6 QX60.

Infiniti has updated the QX60 lineup's exterior with some cosmetic changes. Up front, the grille gets a new double-arch design that aligns the QX60 more closely with the brand’s new family face. Bi-xenon headlights and LED daytime running lights are new, and LED fog lights and LED turn signals incorporated into the side rear-view mirrors now come standard. The rear of the vehicle also shows some minor detail changes.

The interior of the QX60 Hybrid will feature standard heated front seats with 8-way power adjustment for the driver. Passengers can access the third row without removing a child seat secured in the middle row, a particularly family-friendly feature. Infiniti Connection and Infiniti Personal Assistant telematics are also available.

Safety is paramount to buyers of family crossovers, and Infiniti has made important changes to its active safety systems for 2016. The QX line has earned top crash-test scores in previous years, but its forward collision-prevention and mitigation system has not been advanced enough to earn the vehicle a Top Safety Pick+ rating from the Insurance Institute for Highway Safety. Infiniti has improved the system, however, and the 2016 QX line should be eligible for the top rating. The QX60’s backup collision-intervention system can detect objects behind the QX60 and send an alert to the driver, applying the brakes if the driver fails to stop. The QX60 also comes with an around-view monitor with moving-object detection, which gives the driver a bird’s-eye view of the space around the vehicle, making an easier job of parking. Blind-spot intervention and lane-departure warning and prevention both come optional.

The 2016 Infiniti QX60 Hybrid will start at about $53,000. Over the past year, Infiniti and other manufacturers have begun to reduce the availability of green cars due to low gas prices and lessened demand. Buyers interested in the 2016 QX60 Hybrid should expect a limited inventory arriving at dealerships in the spring of 2016.

Have you driven a 2016 INFINITI QX60 Hybrid?
Rank This Car