With its minivan roots, the new Pilot carries on familiar territory as a pleasing family hauler. It's also getting really good at driving itself. 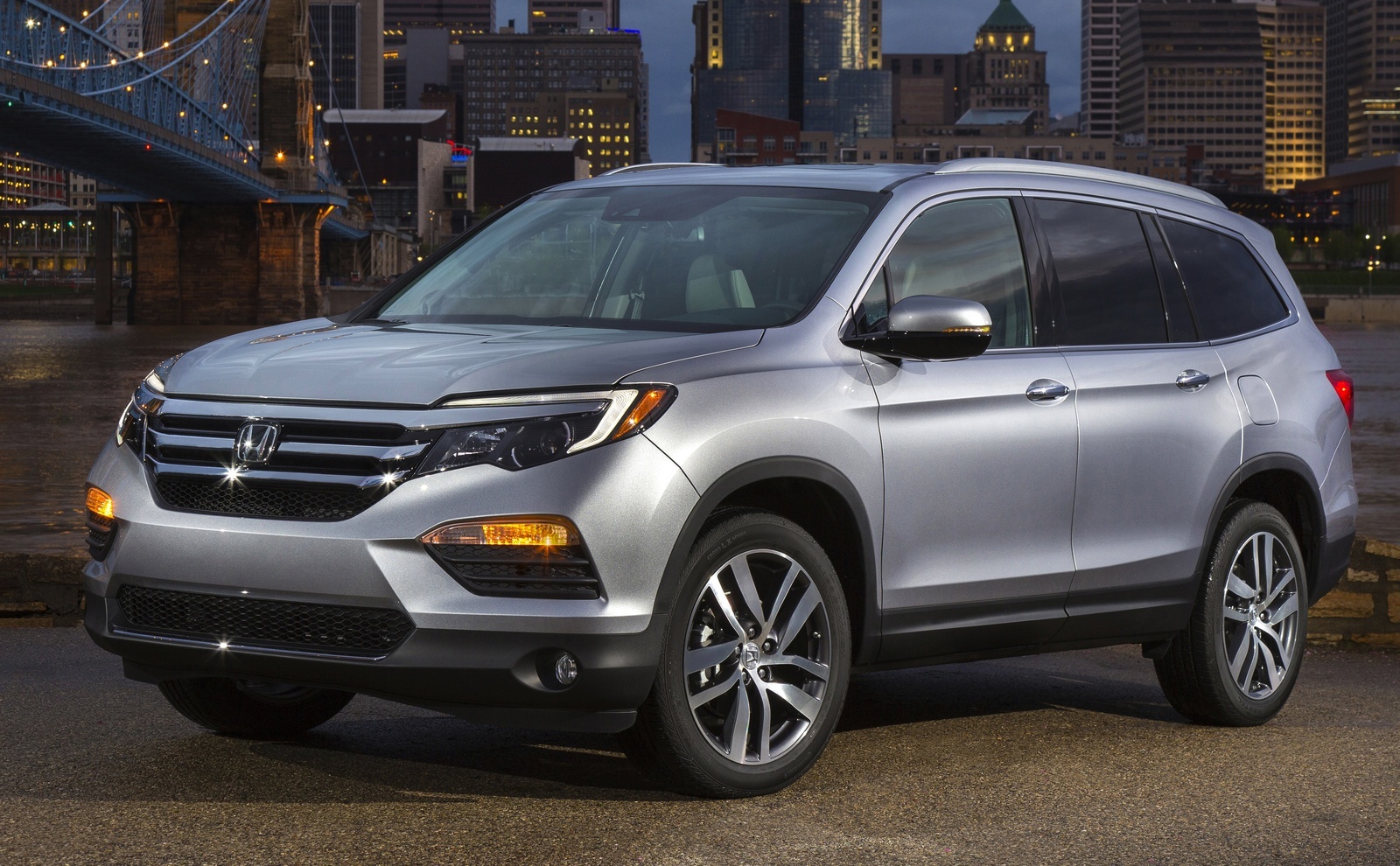 Under its tall, truck-like proportions, the all-new Honda Pilot is built on a minivan chassis. Since the first 2003 model, Honda has paired truck-like styling with car-like driving, an ideal combination that seemed radical against the bestselling Chevy TrailBlazers and Ford Explorers of that era, all of which were based on actual pickup trucks. Now that hardcore, body-on-frame SUVs have been relegated to the enthusiast market, Honda promotes the Pilot’s minivan connection with pride and more than a little irony. “They probably should have bought an Odyssey,” says product manager James Jenkins about his target customers, “but we know they don’t want a minivan.” And that’s exactly why you’re here, isn’t it? 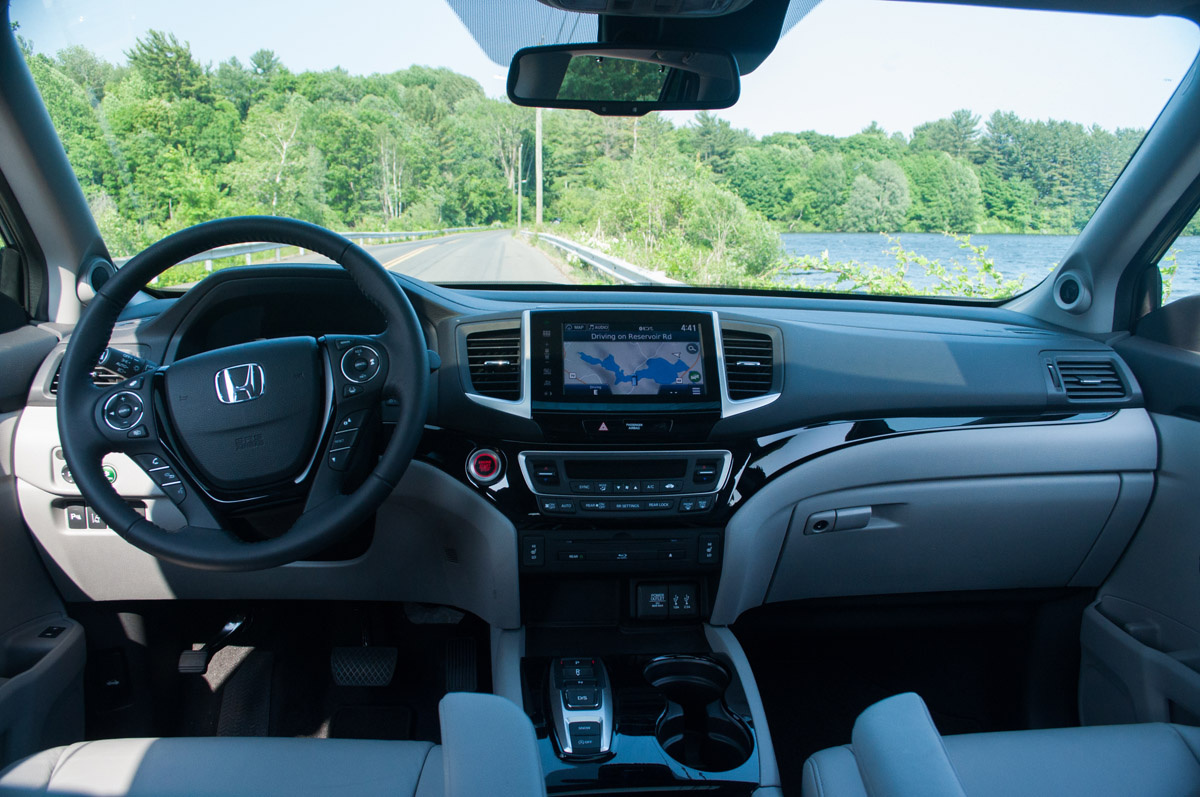 For 2016, Honda tossed the blocky, Rubik’s Cube body styling of the second-generation Pilot for a glossy, streamlined look that nods toward the company’s more expensive Acura MDX. In focus groups, Honda found too many people associating the previous Pilot’s rugged shape with gas guzzlers (despite EPA numbers to the contrary). Apparently, false perceptions matter at car companies, and so we’ve got a new Pilot that could be easily mistaken for a taller Odyssey. While we miss the Pilot’s distinctive Land Rover-esque shapes, there’s no unattractive line on this new model. Our $41,900 FWD Touring, with 20-inch wheels, slick LED running lamps, and a purplish Obsidian Blue Pearl paint job over a gray-and-black interior, was a striking driveway piece. Honda offers five trims with either front-wheel drive (FWD) or all-wheel drive (AWD) with various packages (LX, EX, EX-L, Touring, Elite) that run from $30,875 to $47,300. 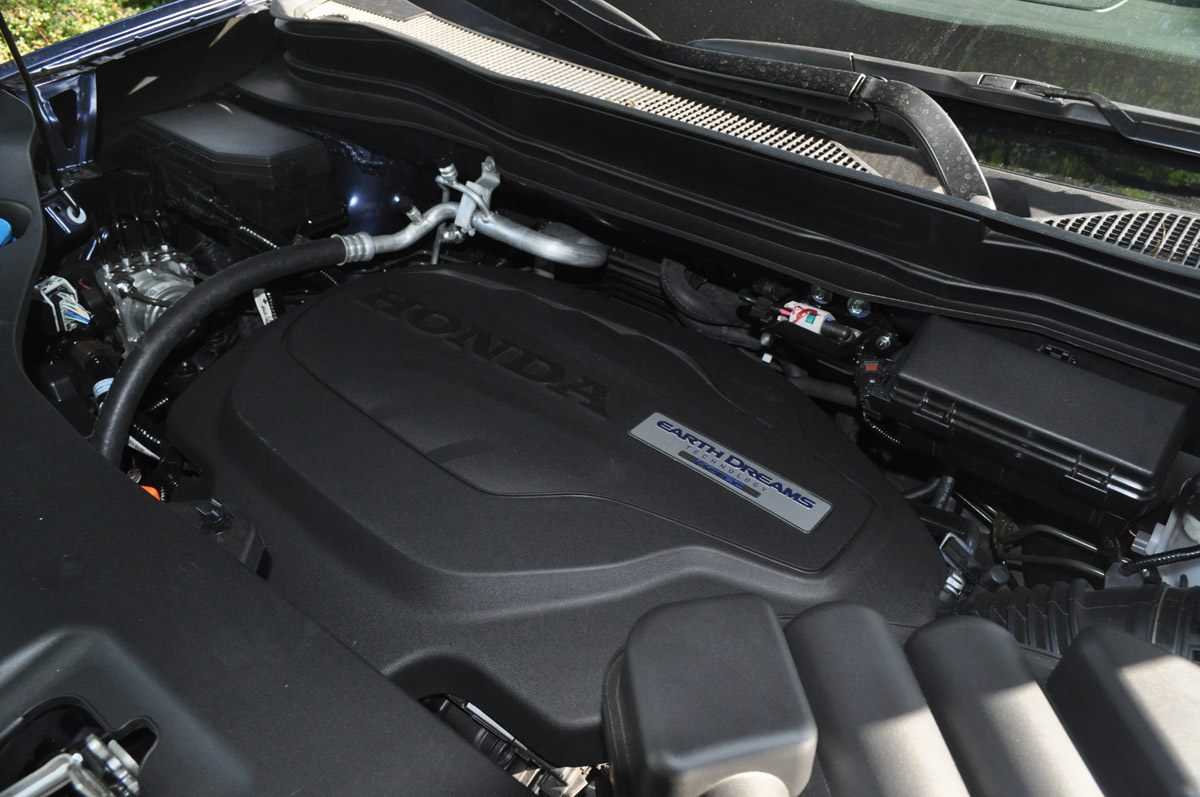 As before, a single 3.5-liter V6 engine comes aboard but now makes 280 hp and 262 lb-ft of torque (up 30 hp and 9 lb-ft) thanks to direct injection, which meters a precise, high-pressure fuel spray directly into the combustion chamber. Cylinder deactivation turns the brawny six into a V3 under light loads and is imperceptible as it switches modes. Acceleration is smooth and strong, with ample passing power even with a dozen 30-pound bags of pine bark mulch loaded in the back.
Two transmissions replace the previous 5-speed automatic. The LX and EX get a 6-speed, while Touring and Elite models come with a 9-speed and auto start/stop. The 9-speed, designed by renowned German gearbox supplier ZF, is much better in the 6-cylinder Pilot than in other 4-cylinder SUVs we’ve tested (such as the Range Rover Evoque and Jeep Cherokee). However, while shifting is ordinarily seamless and decently quick to respond using the steering-wheel-mounted paddles, an occasional clunk surfaced when moving from a stop. Upper-trim AWD Pilots borrow a handling trick from Acura known as torque vectoring, which actively varies the torque split between the left and right rear wheels. Normally found on luxury cars, this system tightens the Pilot’s trajectory around sharp turns without upsetting the chassis by activating the stability control.

At speed, the creamy ride and hushed interior make for effortless cruising (only Touring and Elite models use acoustic lamination for the windshield and front side glass). But despite shedding some 286 pounds, the Pilot is no willing dance partner on winding, fast routes like the Merritt Parkway, where body roll erodes driver confidence. It’s better to take it easy. Braking is just adequate. The steering, however, is light and more communicative than that of most SUVs in this segment. To match those curvier looks, gas mileage improves a hair from 18 mpg city/25 highway to 19/27 in the FWD LX and EX and 20/27 in FWD Touring and Elite. AWD Pilots see a lower 18/26 (LX, EX) and 19/26 (Touring, Elite). We achieved about 22 mpg over a few hundred miles. 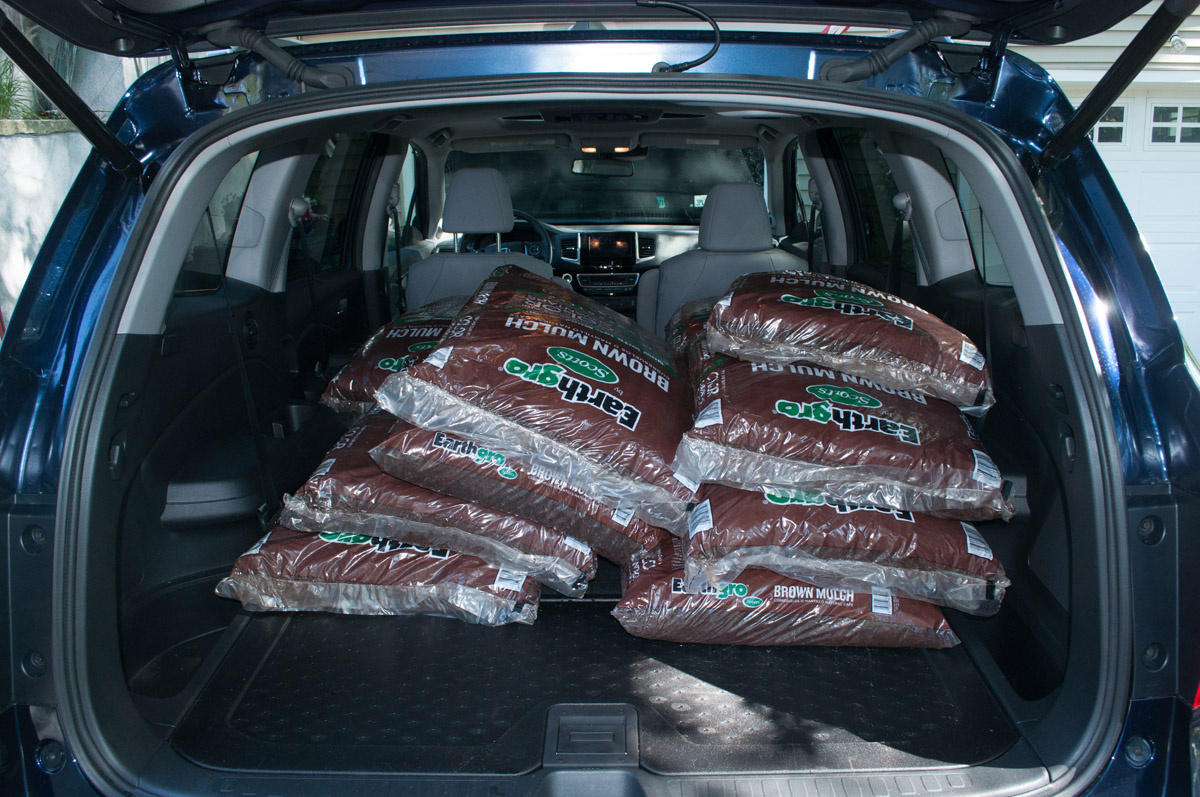 By any dimension, the Pilot is a roomy 3-row, 8-passenger SUV (or 7 in Elite trims, which come with second-row captain’s chairs). Nose to nose, the new Pilot is 3.5 inches longer than the outgoing model with a 1.75-inch increase in wheelbase. A quick-release button on the sides of the second-row seats slides and folds them forward in a jiff, while an additional 1.5 inches between those folded seats and the rear door openings makes it easier to climb into the last row. Still, you won’t want to climb in the back of a Pilot if you’re over 15 years old. Up front, Honda has avoided the confusing two-tier screen setup of its other models with a clear, high-res touchscreen for navigation, phone, and stereo functions.

But there’s a major problem here: The gloss-black screen smudges easily, and the capacitive buttons for volume, power, and other basic functions get entirely washed out in sunlight. The touchscreen is almost impossible to use on a summer’s day in evening rush hour. Another oddity is the gear selector, which is like poking your finger into a lunchbox and hoping you’ve selected the cookies. The four buttons are arranged on a small hump – all different sizes, with a push-tab for reverse – which require you to look down each time. There’s no benefit, or even a cool factor, of shifting the Pilot in such a convoluted manner (Acura employs the same selector on the new TLX). It’s poor. All the other physical switchgear, such as for the air conditioning and steering-wheel controls, works and feels like the typical Honda simplicity and quality we’re more accustomed to seeing. 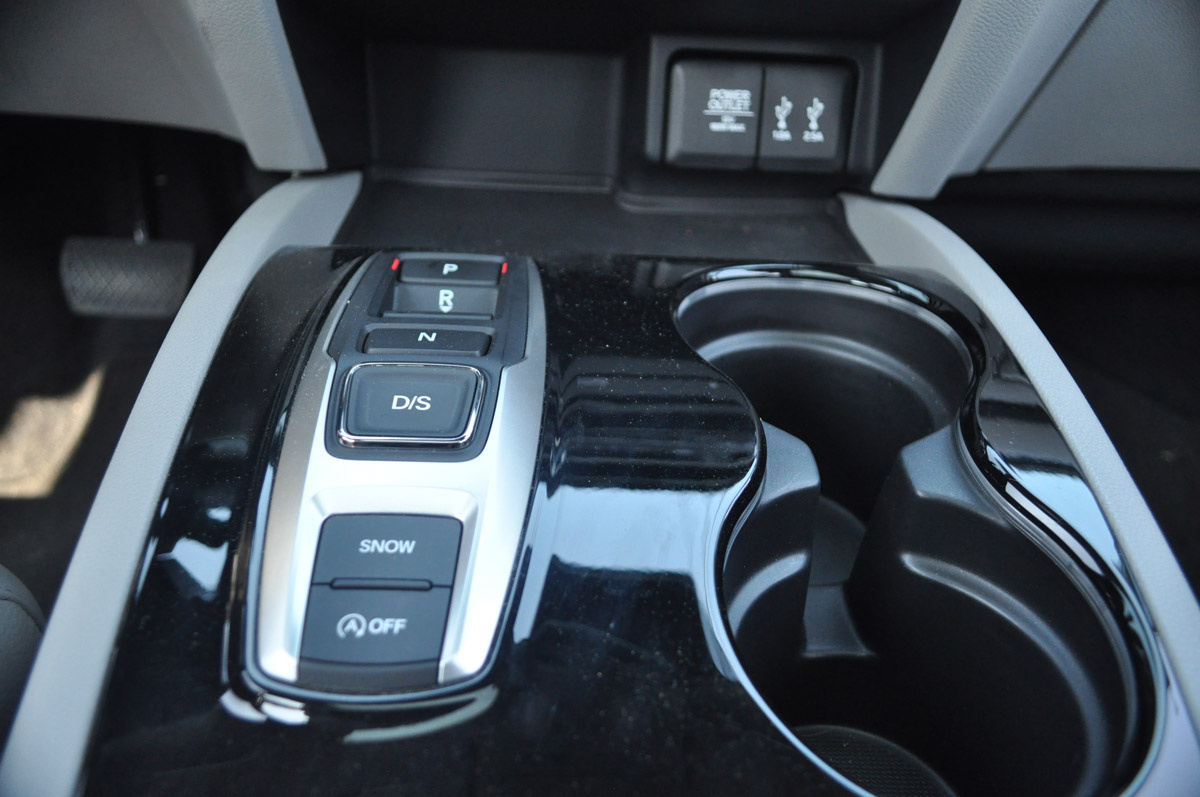 On loaded Pilots like our Touring tester, there’s plenty of gizmos and gadgets. Honda employs high-amp USB ports for quicker device charging (the Pilot has up to 5, depending on the trim), a 115-volt household outlet, and an HDMI input for the rear BluRay multimedia unit. The 10-speaker, 540-watt sound system isn’t impressive, but the Garmin-based navigation is clear, fast, and able to accept a single voice string for addresses (“123 Main Street” instead of dictating “street,” “Main Street,” “house number,” “1-2-3”). Honda LaneWatch integrates a video camera into the passenger-side mirror that instantly shows your blind spot when engaging the right turn signal. It also places three colored line markings indicating approximate car lengths.

Don’t care to steer the Pilot? Honda’s lane-keeping assist system actively takes over the steering when driving within painted lanes, even around moderate turns, and warns you if you’re about to run off the shoulder. It’s freaky to feel the wheel move from your fingers, and if nothing else, it promotes texting and driving for a few seconds. Every other imaginable bit, from Bluetooth audio to Pandora, is included on upper-level Pilots. There are other less obvious but more useful features, such as a tire-pressure monitoring system that knows you’re refilling and will beep when you reach the recommended pressure. When using SiriusXM, the Pilot will simultaneously record the last half-hour of 12 stations, show sports announcements as text pop-ups, and let you mix multiple channels into one random, live playlist. 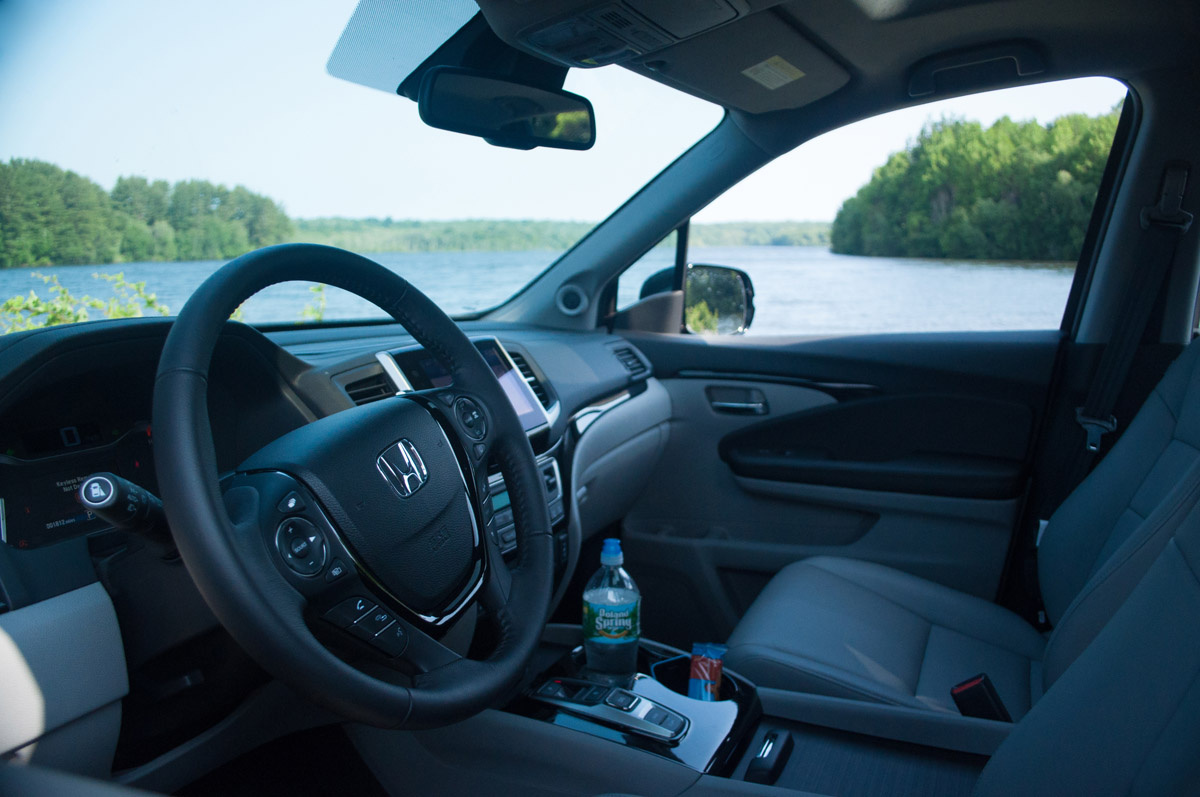 The Pilot earns a Top Safety Pick+ rating from the Insurance Institute for Highway Safety, the nonprofit group’s best rating, and aced every test with the top Good rating (including the difficult small front overlap test that many automakers, including Honda, scored poorly on with other models). The Pilot has not yet been rated by the National Highway Traffic Safety Administration.

An auto-braking system can halt the Pilot to a complete stop from 12 mph and slow the car down at higher speeds. Forward-collision alert, lane-departure warning, adaptive cruise control, and the aforementioned (and superb) lane-keeping system are all part of the Honda Sensing package, which is available on EX trims and standard on Touring and Elite trims. Blind-spot monitoring is available only on the Elite. A standard backup camera can switch among three views (standard, top, wide) for enhanced visibility. Side frontal airbags are designed to vent if they detect the passenger is seated in the path of the deploying airbag, an innovation that's supposed to reduce injuries. 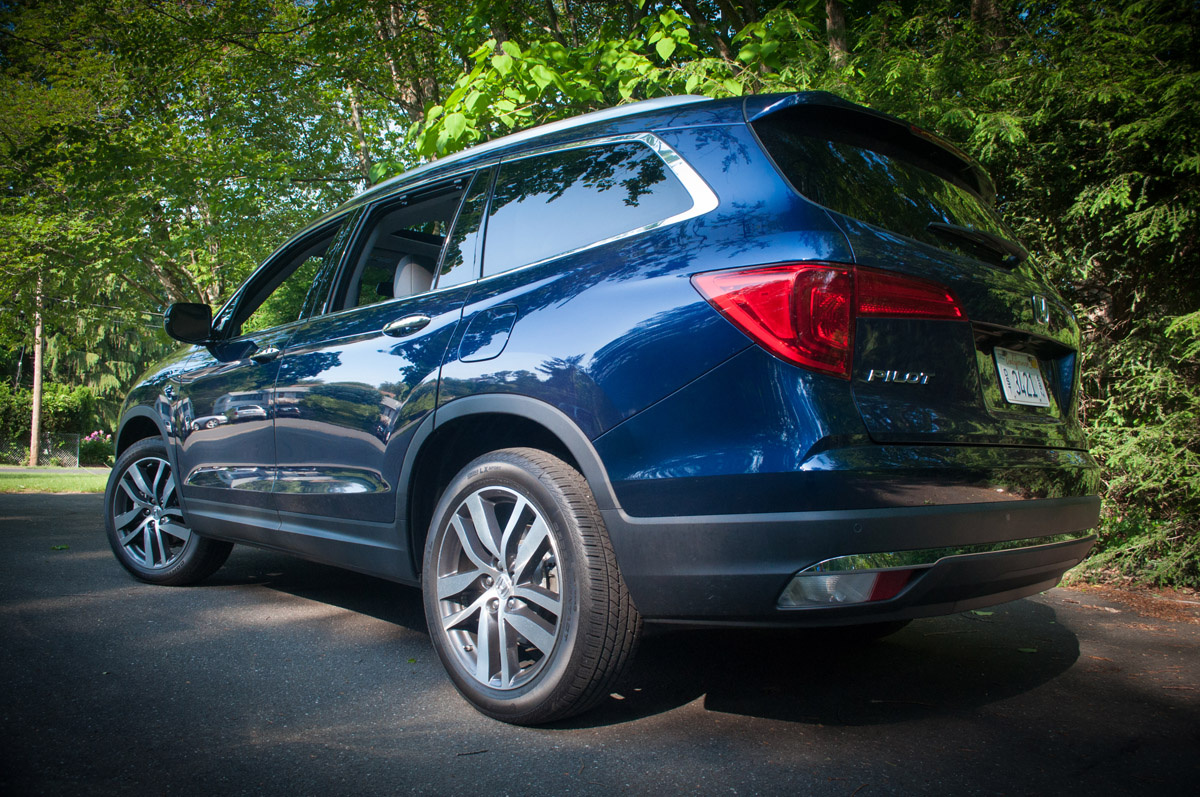 Three-row SUVs, like minivans, no longer come cheap. But Honda keeps the order sheet simple. There are four packages for EX and EX-L trims (the L is for leather) and no standalone options. Most of the good stuff, particularly the safety equipment, is available to lower trims, although we’d like to see the 6-speed automatic nixed and the 9-speed behave a little better. That said, if you want most of the trappings of an Acura, more refinement than GM’s trio of large SUVs, and better build quality than Toyota, the Pilot is a good buy. Factor in Honda’s solid reliability and resale—two areas where Honda still outperforms its Korean competition, which is also worth testing—and the decision gets even simpler. Except when there's a Honda Odyssey parked next to it.

GuruHPYZ1 I cannot disagree with the reviews here, though I might give it a little better rating on performance!

Users ranked 2016 Honda Pilot against other cars which they drove/owned. Each ranking was based on 9 categories. Here is the summary of top rankings.

Have you driven a 2016 Honda Pilot?
Rank This Car

What Does "some Driver Assist Systems Cannot Operate" On A 2016 Pilot?

This shows up right above the mileage on the screen

The Emission System Problem Light Came On On My 2016 Honda Pilot Elite.

The emission system problem light came on on my 2016 Honda Pilot Elite. I've been reading in this and other online forums that 2016 Pilots have had issues with bad fuel injectors. But, I also recent...

How Do I Change The Speed Meter To MPH Instead Km

Honda recommends my transmission fluid be changed every 30,000 miles, but my mechanic friends that specialize in transmission say that they would never open one up because it can cause problems l...