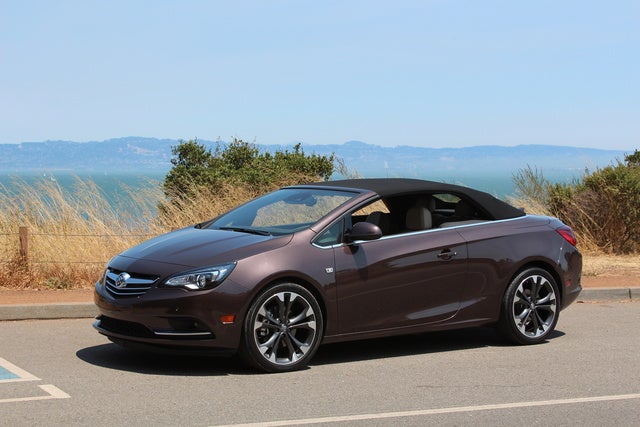 Buick presents its first ragtop in a quarter-century, tapping Opel for this bulky boulevard cruiser.

It’s been 25 years since Buick last offered a convertible—the oft-forgotten Reatta, which curiously offered a CRT touchscreen display just a couple scant decades ahead of the curve back in 1990. But with the Cascada, it’s more about looking backward than forward, as it offers a classic cruising experience with too little forward thinking to truly impress. 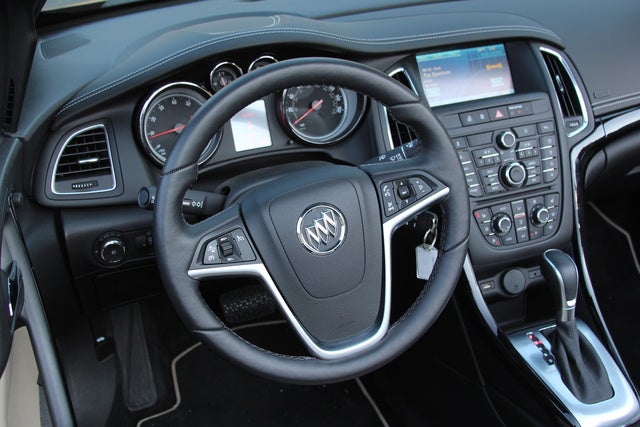 If it’s drop-top comfort you want, the Cascada is the perfect remedy for that particular affliction, but if it’s speed you’re after, you’d be better served looking somewhere else. With 4,000 pounds to haul about and around 200 horsepower and pound-feet of torque to do it, the Cascada is more cruiser than bruiser. Normally this would be a negative, but as it stands, the Cascada is the only vehicle that truly fits this particular niche.

No, the Cascada is all about simplicity and as such comes in just two trims—Convertible and Premium, although you’d be surprised at just how many features come with the base Convertible. At $33,990, the Convertible trim offers a power soft top, adaptive xenon headlights, remote engine start, heated 8-way leather power seats, dual-zone auto climate controls, heated mirrors, rear parking sensors, and a rear-view camera. A heated tilt-and-telescoping steering wheel further emphasizes how Buick has decided to pack this puppy with features designed to woo an older demographic, while 20-inch alloys, foglights, voice controls, and smartphone integration for the 7-inch touchscreen mean they haven’t wholly turned a blind eye to the future.

Jump up to the Premium trim at $36,990, including a $925 destination charge, and you’ll get safety systems like forward-collision and lane-departure warning and front and rear parking sensors, as well as convenience features like auto wipers and interior air deflectors. While there are no factory-offered options for you to add, you can choose from some special paint flavors. The Cascada Premium I spent a week in was swathed in Toasted Coconut, pushing the price up another $395 for a total cost of $37,385. 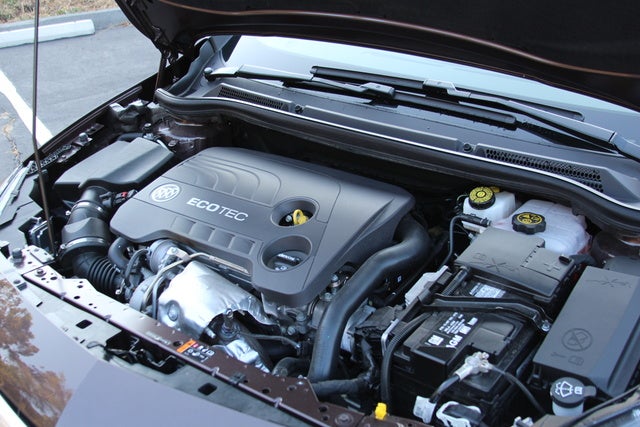 Let’s get the bad out of the way early: the Cascada is underpowered. Rather, the Cascada is over-ballasted. To build it, Buick took the very easy route of rebadging the Opel Cascada, a car assembled in GM’s Gliwice, Poland, plant. While the Opel Cascada sports a stiff, responsive chassis, molding it into a convertible meant adding more than 800 pounds of extra bracing and support, pushing the final curb weight to more than 4,000 pounds. Normally, the 1.6-liter turbocharged engine’s very impressive 200 hp and 207 lb-ft of torque would be enough for a small convertible, but with nearly 2 tons to deal with, the little turbo four is simply overwhelmed. Even with an overboost feature that briefly pushes torque to 221 lb-ft at just 2,200 rpm and an incredibly low first-gear ratio of 4.58:1, the sprint to 60 will still take the better part of 9 seconds. That’s very simply too slow for anything that costs more than 20 grand, with the possible exception of Stephen Hawking’s wheelchair.

Keep in mind that competitors like the A3 Cabriolet, the BMW 2 Series convertible, and the Mustang/Camaro convertibles will do the same job in 6 seconds or less. Sure, the Audi/BMW will cost you about $10K more than the Cascada, but the EcoBoost Mustang convertible has a nearly identical price and does a much better job at getting up to speed. Handles better, too.

The good news is that up to 30 mph, the Cascada is actually rather torquey, mostly thanks to that ultra-low first-gear ratio that unbelievably bests most sports cars on the market. Unfortunately, the efforts to combat the weight through the added torque and the turbo haven’t done anything to help fuel economy. And while the older demographic that Buick is targeting here probably won’t be put off by the lack of blistering acceleration, poor performance at the pump is likely to be a sore spot. With an EPA-estimated rating of 20 mpg city/27 highway for a combined rating of 23 mpg, the Cascada isn’t poised to impress any eco advocates. But the story is actually worse. In my week with the Cascada, I could manage only 18.5 mpg, despite not really getting on the gas too badly, and my numbers never got very high into the 20s, even when cruising. That’s going to hurt the Cascada’s reception, especially when the closest competition is reaching into the mid-30s.

The Delta II platform is familiar and firm, currently being used for the Chevrolet Volt and Cruze as well as the Buick Verano. But the extra bracing and weight coupled with the 20-inch wheels means the Cascada transmits broken pavement aggressively, and when things get rough, you’re going to notice some shake and shimmy that can’t be described as comfortable. Plus, with all-season, low-rolling-resistance rubber wrapping those 20-inchers, you’ll get quite a lot of understeer when you push it through a turn. But that’s not how you’re supposed to drive the Cascada. Cruise along an ocean road or roll down Main Street and you’ll have a much better experience. 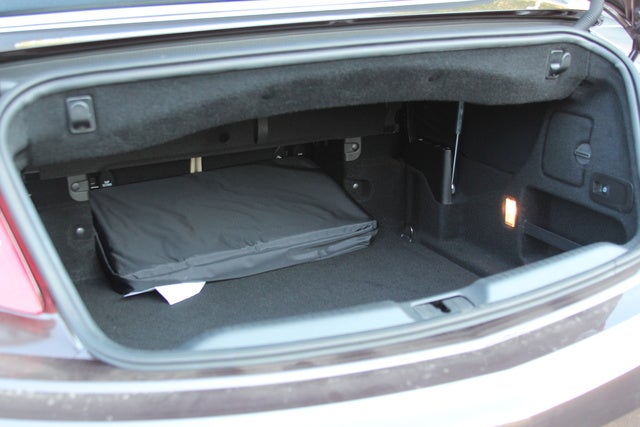 Even after a week's worth of driving, I’m still not sure how I feel about the looks of the Cascada. With its snub nose, high rear end, and a ridiculously raked windshield at 67 degrees, the whole effect is a bit of a jellybean aesthetic with the top up. With the top down you’re sure that windshield is going to get in the way, but everything seems to fit fine, even with my 6-foot, 4-inch frame. Still, I feel it's an overall attractive package, and it got quite a bit of attention during my week driving around the Bay. Seats are comfortable front and back, and until you start pushing things, the chassis and suspension do a good job delivering a relaxed ride despite the prodigious poundage here.

Take a look inside and you’ll see a smattering of selections from other GM offerings, with the glowing example being the infotainment and climate controls—a barrage of buttons that looks incredibly confusing in a vehicular landscape that tends to get the job done with just a few physical buttons alongside a touchscreen. Speaking of which, the touchscreen here is inconveniently positioned, as the bottom half of the screen is blocked due to a raked angle and a deep set in the dash. With the top down, it often washes out in the sun as well. Overall it’s just really disappointing.

Because of its high back end, rearward visibility in the Cascada is some of the worst I’ve experienced, even with the top down. With the top up, it falls nearly to zero, so the inclusion of a rear-view camera is nice, as are the rear parking sensors, but the omission of blind-spot monitoring and rear cross-traffic alert is disappointing here, as they’re both sorely needed.

Dropping the top is as simple as flipping a lever on the center console, but in order to do so, you must make sure you’ve dropped the parcel shelf in the trunk to allow room for the top. This means a couple of important things. First, it means storage drops from 13.4 cubic feet to 9.8, which is severely limited by the intruding parcel shelf (see the video for a demonstration). Second, it means if you’re going on a trip and you plan to cruise with the top down at any time, you should plan for only that 9.8 cubic feet. Don’t fill the trunk and think you’ll be able to drop the top when the sun comes out. 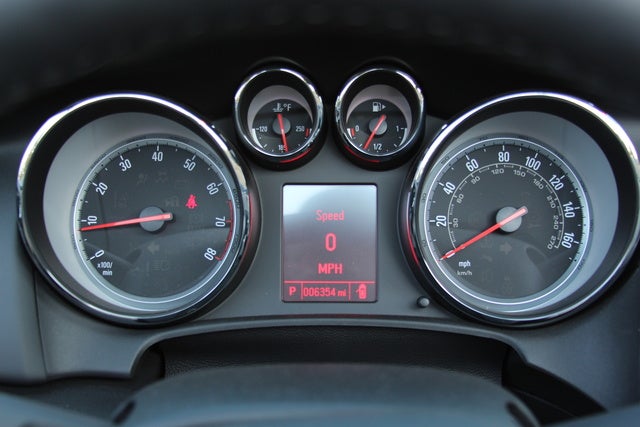 Besides the weight, technology might be the biggest drawback of the Cascada. There are some pretty confusing omissions here. For instance, you get remote keyless entry and remote engine start, but there’s still a physical key? Seems strange not to have keyless ignition as well. And what about that lack of blind-spot monitoring or rear cross-traffic alert? Power and heat for the seats, mirrors, and steering wheel are great inclusions, especially at the Base trim level, but the entire infotainment and climate-control systems are very obviously several generations old and not likely to woo any younger buyers to join Buick’s aged demographic profile.

Perhaps worse, the $3,000 jump up to the Premium trim is a steep climb to add only a few features like the forward-collision and lane-departure warning, front parking sensors, auto wipers, and interior air deflectors.

Finally, it’s the aging 6-speed automatic transmission that needs an update. Utilizing GM’s 8-speed setup would do a lot for the lackluster efficiency here. We hope Buick’s sales successes of late will continue with the Cascada and justify an upgrade. 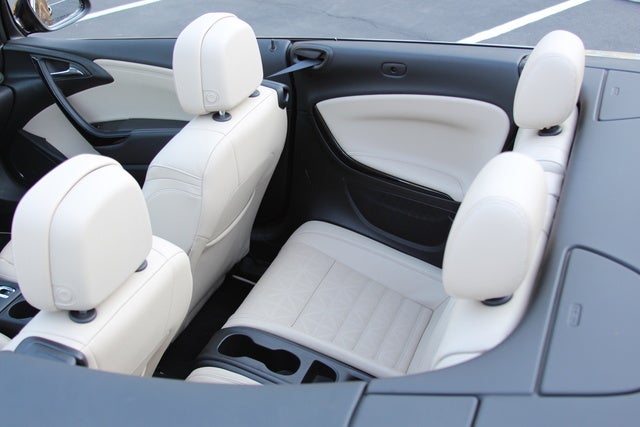 The National Highway Traffic Safety Administration has not yet tested the Cascada, but Buick “anticipates” a 5-star rating, for whatever that’s worth. The lack of necessary safety features like blind-spot monitoring and rear cross-traffic alert is a worrisome oversight, as is an unimpressive 125-foot 60-0-mph braking distance. That aside, the Cascada comes with standard safety features like antilock discs, traction and stability control, and a full suite of airbags including front-seat side and front knee. Additionally, safety hoops will deploy if the vehicle senses an imminent rollover. 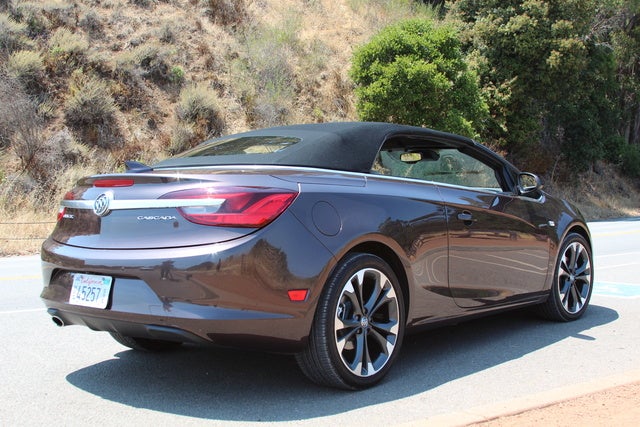 There’s long been an empty spot in the parking lot of the American car marketplace. If you want a compact convertible, a luxury convertible, or a convertible sports car, you have plenty of options. But if you want a regular car with a soft top that’s not trying to be the smallest, the fanciest, or the fastest, you were largely out of luck over the past couple of decades. The Cascada fixes this, and while it may not be the best GM could offer, it’s not a bad attempt to fill the gap.

If you’re okay spending a little bit more, the A3 Cabriolet and the BMW 2 Series convertible best the Cascada in every measurable category—and they look better, too. If you don’t mind rear-wheel drive, the EcoBoost Mustang handles better, is faster, gets better gas mileage, and costs the same. But if the Cascada is exactly what you’re looking for, I’d wait a bit to see if the offer gets better with some added tech or an improved drivetrain. If it sells well, I'll bet Buick will get on it soon, and if it sells poorly, you’ll stand to save some serious cash as you help clear the sales lots of their unsold stock.

gunnerNSA I;vve been interested in this vehicle ever since I researched the Opel version - and kept hopes that Buick would build one for the U.S.A., Having had purchased two Veranos since 2011, I have been most satisfied in every respect , except one: the right space of rear seats. Both were/are exceptional compact luxury vehicles that are reliable and have been impressed by Buick service where I purchased the last one. From what I have read and seen so far, can't wait until 2016 to see in show room and, if it as a appealing as it appears, hope to purchase one. Even though I am quite older senior, I find it exciting and glad it is a Buick - my favorite brand for value, comfort and performance.

TheHorror Just save some money for a new keyboard, Jim. Your Caps Lock key is broken.

Have you driven a 2016 Buick Cascada?
Rank This Car

How Do I Edit My Ad?