Looking for a Used X1 in your area?

The 2016 X1 is a revolutionary car, since it's the first BMW to be based on a front-wheel-drive platform. Given how well it drives, you'd never know. 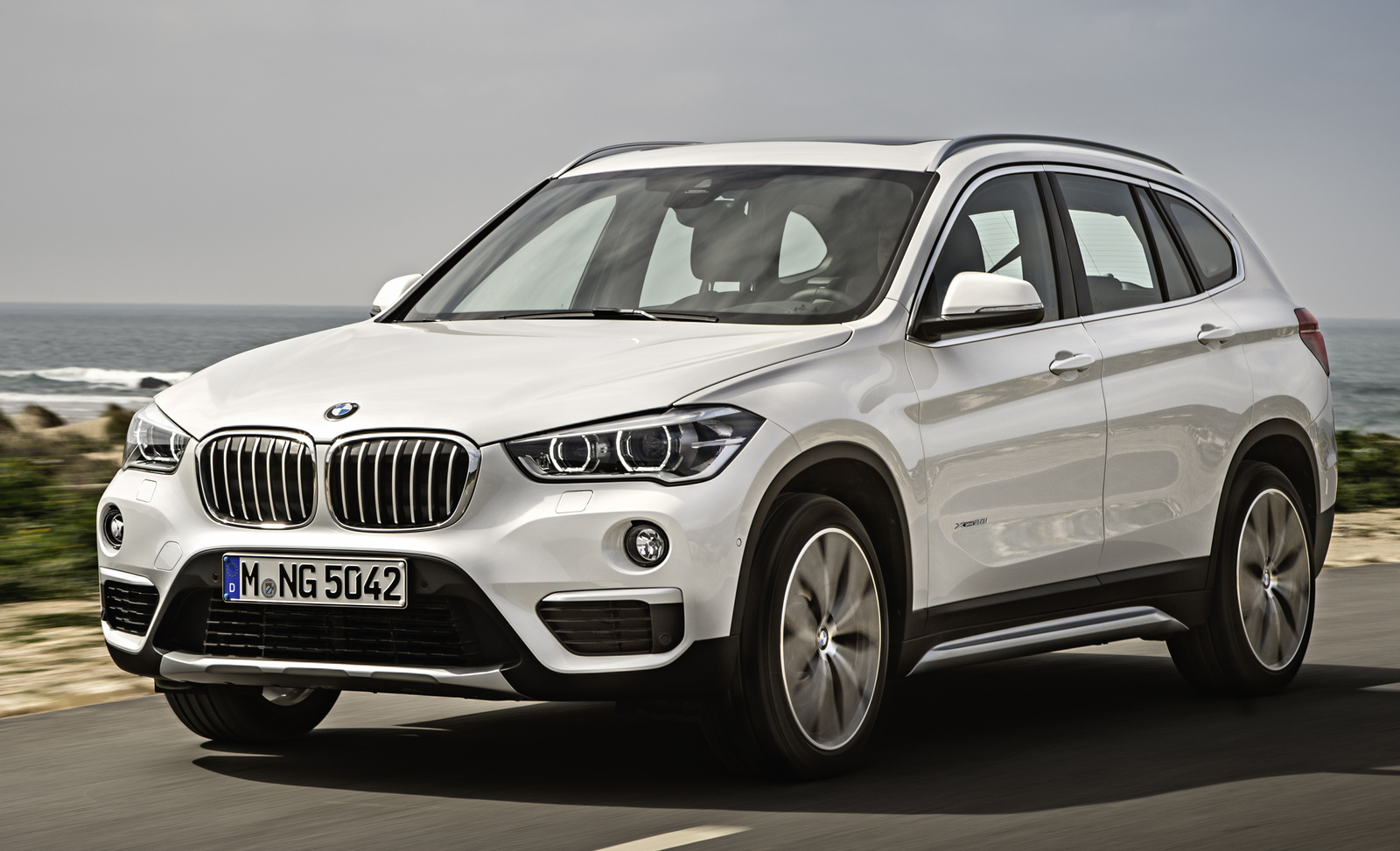 The march of Xs rolls on and cannot stop, especially when it comes to the little BMW X1. Redesigned for 2016, the X1 arrives right as compact luxury SUV sales are surging. That might be good for BMW, but is this second-generation X1 worth your attention, now that it’s based on the company’s Mini platform? Of course it is—to a point. 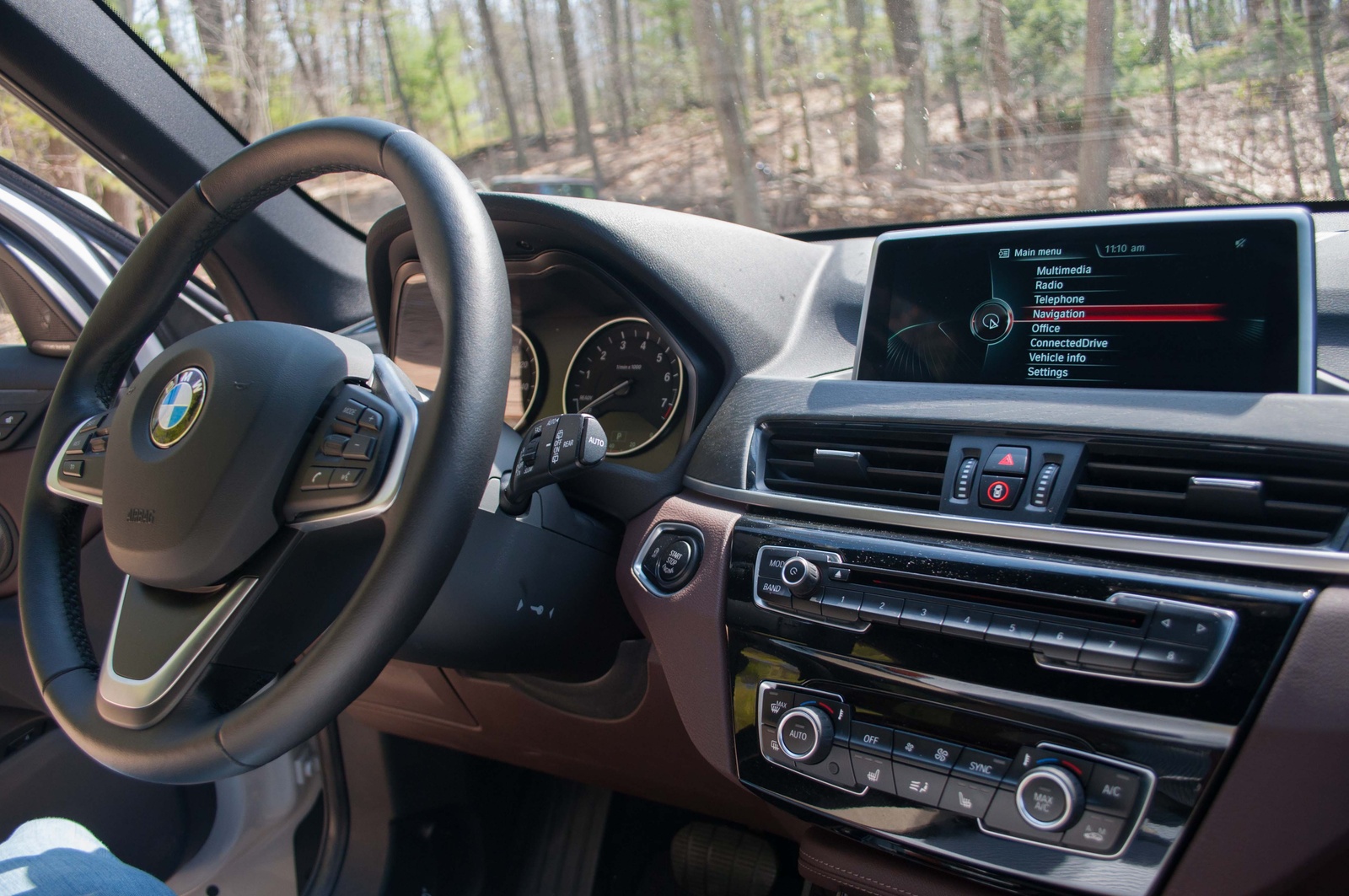 The first X1 was a taller 3 Series wagon with little in the way of creature comforts. It debuted in the U.S. for 2011 and was nice enough, but cheap interior materials and blasé style didn’t take it far. For 2016, we’re treated to a proper luxury SUV, right down to every last detail. BMW’s clean lines, from the shoulder crease running the length of the body to the large, instantly recognizable taillamps—a tall order these days, when car designers seem to copy each other—make the X1 dapper from every angle. With contrasting black fender arches and a silver-painted rocker panel, the X1 now looks as expensive as it really is. We’re particularly fond of how BMW retained a cab-rearward profile and kept the hood at a relatively low height—two style points that are particularly difficult to achieve with a front-wheel drive (FWD) chassis.

Yes, this is the first BMW built without rear-wheel drive (RWD), as it’s based on the company’s MINI Cooper Clubman and 2 Series Active Tourer, the latter of which is a Euro-style minivan not sold here. Inside, the only giveaways of van-like atmosphere are a low center console, which requires a longer shifter, and a center stack that floats a little awkwardly above the car’s floor. That interior is classic BMW—minimal, tightly constructed, and everything within easy reach. The lower dashboard panels are soft touch, unlike the old X1, and the stitched brown leather trim on our test car was fetching, although it’s optional. Speaking of options, our car—a sleek mix of metallic white over black and brown—had every single one save for adaptive cruise control. No doubt it swayed our style meter. 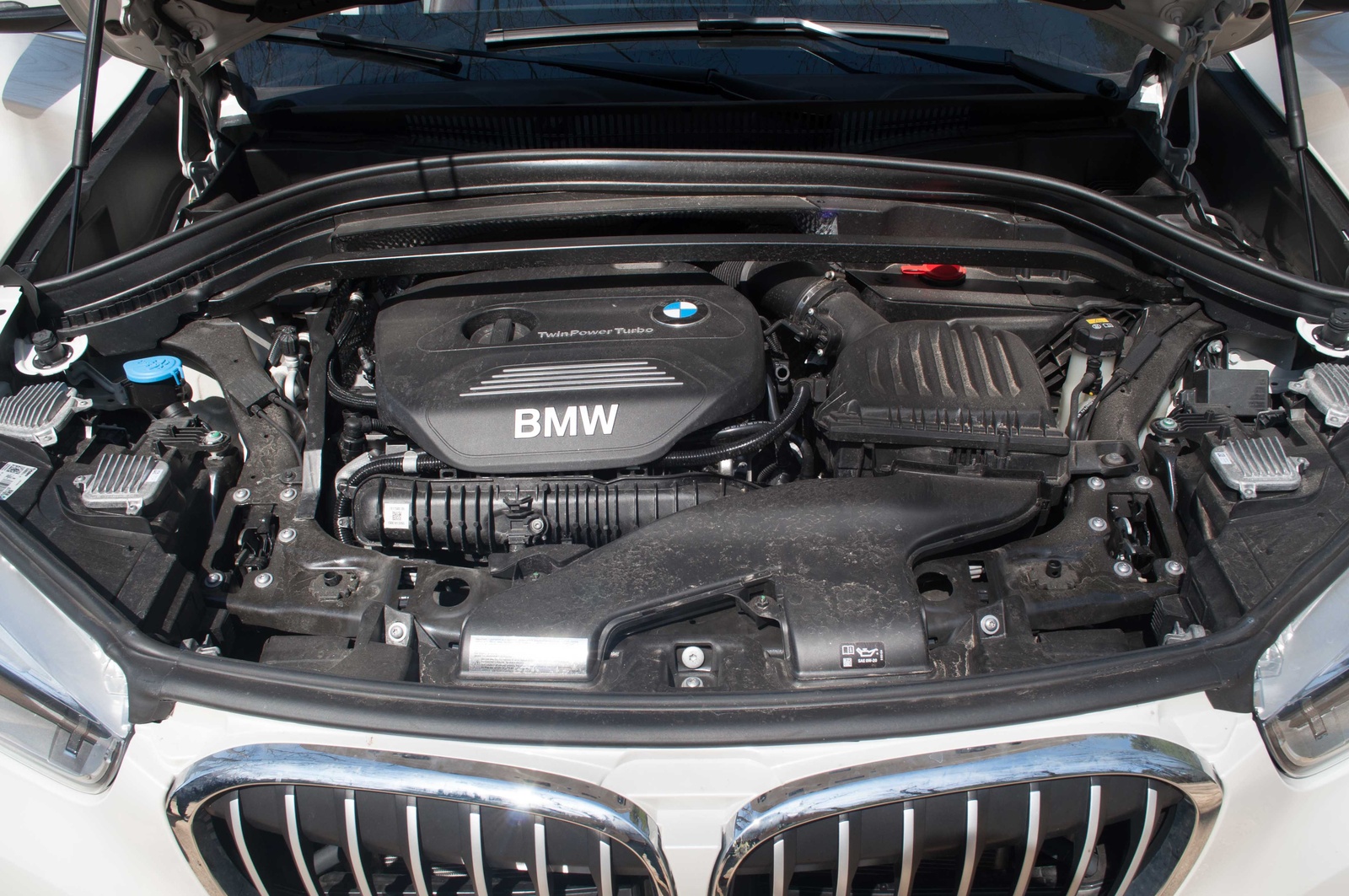 Available in one trim, the xDrive28i, the 2016 X1 comes with a pared-down version of the 2.0-liter turbocharged 4-cylinder found in the 3 Series. It’s rated at 228 horsepower (down 13 from the previous generation) with 258 pound-feet of torque at 1,250 rpm. Full torque is tapped just off idle, and this little guy snaps off the line. There’s occasionally a hint of turbo lag when the engine’s cold, and if you listen closely, you can hear the turbo whoosh as pressure builds and releases. The previous X1 was a rocket ship with its optional turbocharged inline six pumping 300 horsepower, but it was overkill and gulped gas.

The new car is a couple dozen pounds lighter, and when this engine warms up—you must cycle through the instrument panel LCD to find the coolant gauge—it’s sprightly, smooth, never nasal, and always at the ready. In Sport driving mode, the 8-speed automatic shifts more quickly and steering weight increases. With the gearbox also in “S” mode, the X1 prepares for an upcoming assault by downshifting even earlier. We would have preferred paddle shifters, but those are available only with the M Sport package, which removes the X1’s handsome contrasts by matching all exterior trim to the body color, and the transmission is smart enough that you won’t really miss those paddles. All-wheel drive (AWD) is standard, although a cheaper FWD version may be added later. Fuel economy is rated by the EPA at 22 mpg city/32 highway. We averaged 26 mpg over 300 miles.

We’ve bemoaned BMW’s electric power steering in other reviews for its on-center vagueness and artificial feel, but wow, does it work in the new X1. At low speeds there’s an old-school heaviness like in the previous X1, and the whole rack is very responsive and alive. Brake feel is exceptional, with short pedal travel and easy modulation. Our car wore optional 19-inch summer Pirelli P7s, which brought the most out of the X1’s nimble, balanced response. Trading some grip for all-season traction won’t hurt this car, but it won’t feel as heroic. You’ll get a better ride, though, especially if you swap the standard 18-inch run-flats for regular tires. That’s a no-cost option, spare included. But even with our test car’s aggressive setup, road noise and vibrations were well damped, and there’s significantly more suspension travel than on BMW’s rock-hard MINI models. 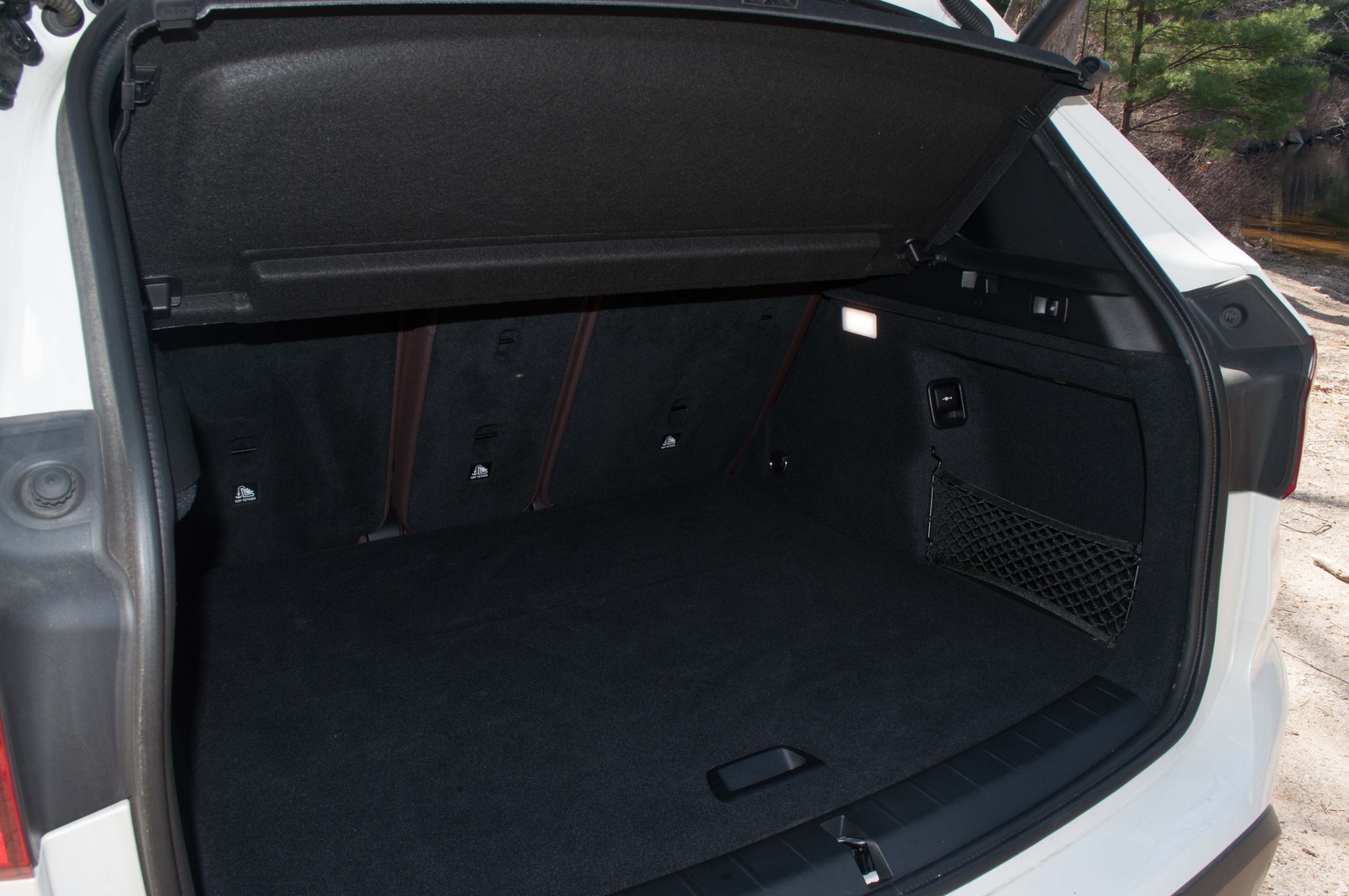 Getting behind the wheel of a new BMW doesn’t just make you feel spoiled. You’re at ease. The fussy touch-sensitive dashboards used by Cadillac, the multi-dimensional controls in the new Mercedes, the absurd mouse controller in a Lexus, the double-screened mess of the Acura—they’re not here! When BMW’s iDrive system came out in 2002, it was one of the first infotainment systems on the market. It was awful, slow, complex, and distracting. But nowadays BMW iDrive is among the best. The interface is logical, response times are quick, menus and graphics are legible, and hard buttons let the driver breeze through various screens. The radio and climate controls are arranged like radio and climate controls. The two-gauge instrument cluster looks like those in BMWs did in the 1970s. Only the ambient amber lighting, a head-up display on the windshield, and that 8.8-inch display give you modern cues. We like this attitude. Everything falls right to hand.

For a small SUV that’s trimmer than the X3, the X1 packs a lot of headroom, elbow room, and legroom. Versus the outgoing car, the new X1 is 1.7 inches taller and 0.9 inches wider. It has 27 cubic feet of cargo space, up by 2. Despite riding on a 3.6-inch-shorter wheelbase, it offers 1.5 inches of extra legroom (or 2.6 inches with the recline option). All in all, it’s a roomy, airy ride—especially with the panoramic moonroof—that’s a cinch to park.

But there are some glaring oversights. The reclining back seats—a $300 option, don’t get us started yet—don’t have any handles to operate them. Instead, the pull tabs reserved for folding down the seats do double duty for the recliner. Pull one, and the spring slaps the seat against your back before you begin to lean. The seats themselves are rather hard, flat, and unsupportive, with little lateral or thigh support. The M Sport package adds better front seats, but they should be standard. Tilt the steering column upward and the wheel blocks half of the LCD info display on the instrument cluster, which means you can’t see directions, radio stations, the trip odometer, or other functions. But when you see the Spartan interior of an Audi Q3, you’ll be glad you chose the X1. 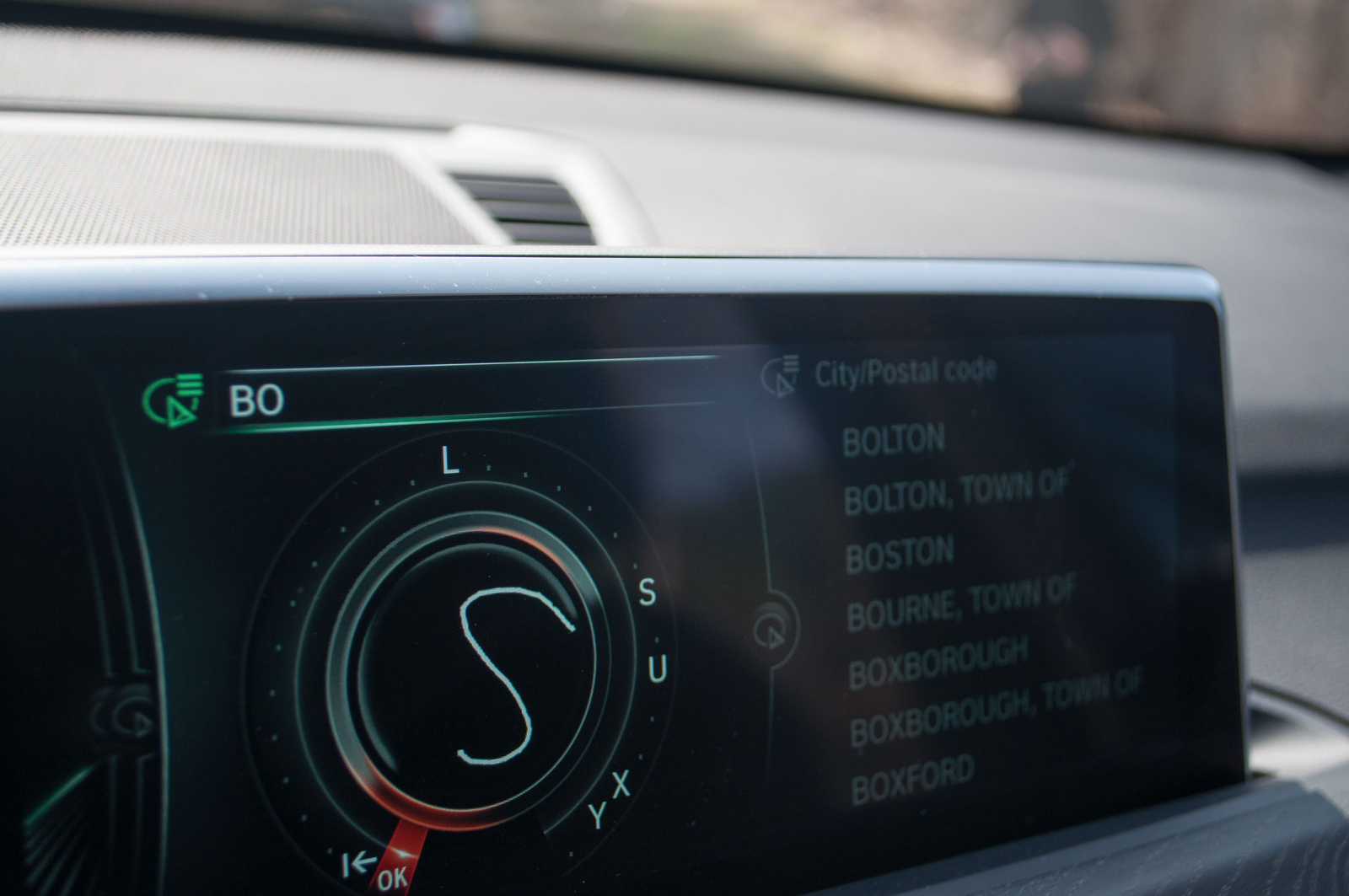 BMW’s navigation system has some of the clearest graphics in the industry, and with single-string voice commands and handwriting recognition, entering an address couldn’t be easier. You can also search Google to quickly pull up destinations the car’s computer can’t muster (a 3-year data plan is included with the Technology package). An illustrated owner’s manual is onboard the iDrive system, as are all sorts of customization options (such as the tailgate height, ambient lighting colors, and too many other things to list). One USB port, two power outlets, and an auxiliary 3.5-mm audio input jack come for the ride, and the 12-speaker Harman/Kardon stereo is crisp and balanced.

There’s an option to split the last third of the infotainment screen to continuously show music, the map, or other features—say, your latest Facebook and Twitter feeds, which require an installed BMW app on a connected device—while something else dominates the main part of the screen. Telematics such as remote unlocking and stolen-vehicle alert are available. Our car’s LED headlights were appropriately bright and clear, though not as impressive as those from Lexus. The head-up display can show local speed limits and is incredibly precise at showing upcoming turns, street names, and exact lanes. Even graphics for the most confusing rotaries show up right before your eyes. And if you don’t like to parallel park, the X1 can do that for you. 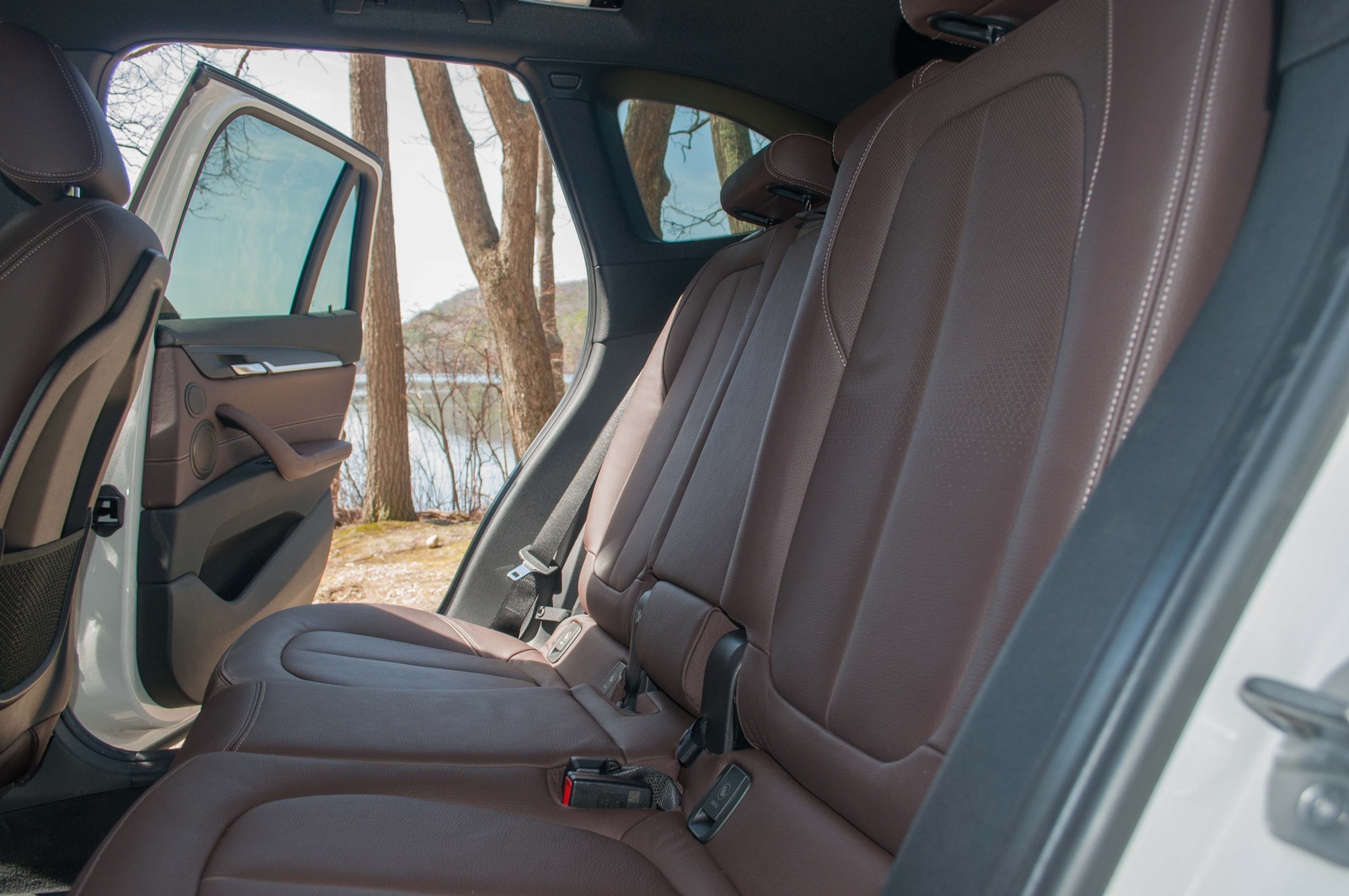 The X1 has not been rated by the National Highway Traffic Safety Administration (NHTSA) or the Institute for Highway Safety (IIHS). We predict top ratings if this car is ever tested. It has the usual airbags and safety features, including brakes that automatically dry in the rain and can compensate for fade. Our car had lane-departure warning, forward-collision alert, and auto braking with pedestrian detection (since there is no night-vision camera, the car senses people only in daylight). Adaptive cruise control is also available, yet blind-spot monitoring is not. Neither is lane-keeping assist, which moves the steering wheel by itself to center the car between two lane markings.

UPDATE: The IIHS named the 2016 BMW X1 a Top Safety Pick+ on 5/26, indicating the car achieved Good scores in all 5 of the Institute's crashworthiness tests and offers a front crash prevention system that earned an Advanced or Superior rating. 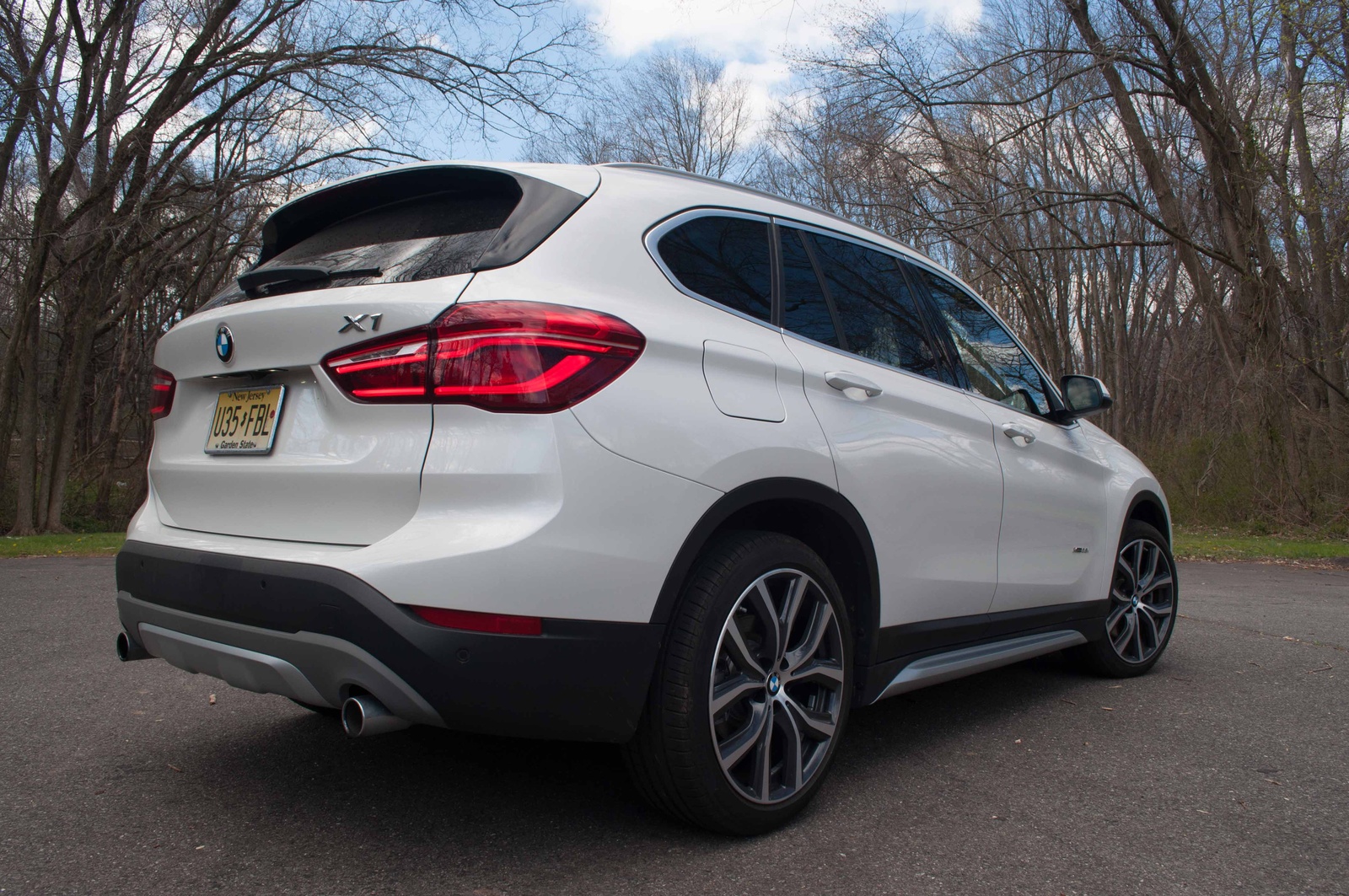 Almost everything we’ve written about here is optional. The X1 may start at $35,795 with destination, but that buys only a car with four wheels. A backup camera isn’t standard. An auto-dimming rear-view mirror isn’t standard. Lumbar support isn’t standard. And on and on. Our tester included all six packages you can order save for the M Sport (the Luxury package, which our car had, eliminates that option and vice-versa). With the $600 plus-size wheels, $300 for the reclining back seat, and $875 for the stereo, this loaded X1 carried $12,075 worth of options for a grand, absurd total of $47,870.

Considering the size of this car, you could trade up to a fully loaded Jeep Grand Cherokee Summit for a couple grand more, or save many thousands by trading up to any number of non-luxury compact and midsize SUVs in their top trim levels. The problem with all BMWs (and most German luxury cars, for that matter) is that if you scrap a few options, you’re left with a bare-bones car. Still, the X1 looks great and drives even better, and if you’re not on a tight budget, it’s a very compelling choice. Just know that you could have gone bigger and saved a bundle.

Users ranked 2016 BMW X1 against other cars which they drove/owned. Each ranking was based on 9 categories. Here is the summary of top rankings.

Looking for a Used X1 in your area?

How Do I Find Fair Value For My Car?

How Do I Find Out My Battery Type?

Hey, I have a 2016 X1 and I am trying to charge the battery. I have no idea however if it is a Litium Ion one on not. Any ideas how i find out?

How Do I Fix This?

Bought my BMW X1 and never noticed this on the steering wheel, how do I fix this?

40 views with 2 answers (last answer about a year ago)

I started my car this morning and my infotainment screen is totally black, nothing. I restarted the car three or four times and still nothing. What is going on? Is this a fuse?