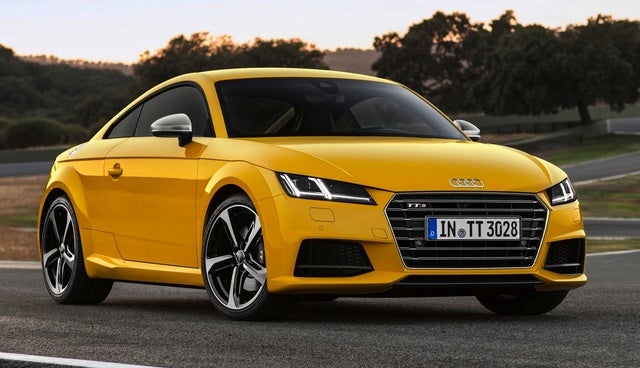 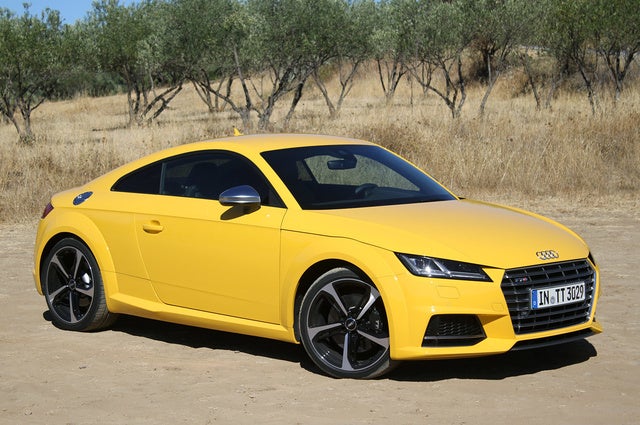 Those who find Audi’s audacious and reworked 2016 TT not quite radical enough can shell out considerably more swag for the similarly re-styled and perk-laden 2016 TTS. Available in either hardtop Coupe or drop-top Roadster form, both variations of this snazzy Audi come in a single 2.0T Quattro trim, with said Quattro designation underlining the standard intelligent all-wheel-drive configuration (iAWD) that’s been a TT tradition since its inception some 15 years back.

Like its lesser non-S cousin, the upcoming year’s TTS premium compact coupe and convertible manifestations get a bunch of upgrades, including the shedding of some 110 pounds of curb weight via an aluminum hood, seat frames, and body panels, while engine components are also made of lighter-weight stuff. Additionally, the next-gen TTS boasts a wider, fancier grille and reworked headlights, not to mention sitting a bit lower to the ground. Further additions for the upcoming model year also include a new 12.3-inch infotainment display bolstering upgraded-for-2016 multimedia technology.

Powering the 2016 TTS editions is a 2.0-liter turbocharged inline 4-cylinder (I4) engine with a hefty dollop of ponies added for next year. Boasting a standard 6-speed auto-manual transmission, which reviewers fervently hope will be accompanied by the 6-speed manual transmission that's currently an option for European versions, this force-fed 4-cylinder will put out 310 hp and 280 lb-ft of torque. Mileage estimates from the re-worked I4 are, of course, not available, but another Euro-centric perk that reviewers wish would make it over to the U.S. is a peppy and fuel-efficient turbodiesel powerplant. And that might happen—stay tuned!

In any case, standard profile perks in both the TTS Coupe and Roadster editions for the upcoming model year include a sport-tuned suspension and dual-pipe sport exhaust system, 19-inch alloy wheels with performance tires, heated power-adjustable mirrors, and a rear spoiler, all of which complement this sporty Audi’s new look for 2016.

Techno-goodies, meantime, include the new-for-2016 12.3-inch infotainment screen as a further upgrade to the Bluetooth-interfaced multimedia functions, as well as a returning 225-watt Bose premium audio system with CD player, 12 speakers, and satellite radio.

Options-wise, both the 2016 TTS Coupe and Roadster variants can be equipped with available GPS navigation, rear parking sensors, and lane-keeping assist, not to mention the urban-oriented auto parallel-parking assist feature. Oh, and the newly re-styled high-intensity-discharge (HID) LED headlights are slated to sport a new-for-2016 high-beam function that won’t blind oncoming drivers, but said upgrade will depend on U.S. safety regulations.