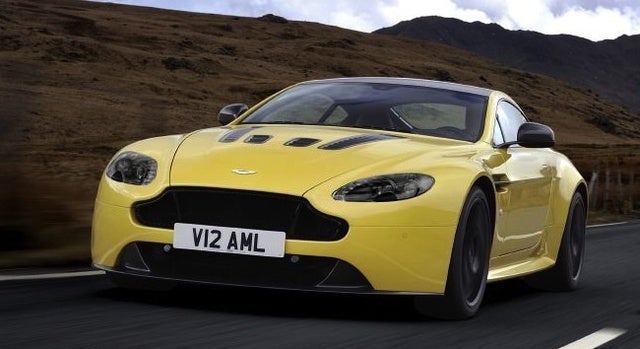 After its tolerably successful debut as a 2-seat coupe in 2013, Aston Martin’s V12 Vantage gained an “S” (Sport) designation for 2014 and added a convertible Roadster trim for the 2015 model year. The 2016 V12 Vantage, again available in both coupe and convertible trims, boasts the British automaker’s most potent powerplant in a body that’s shed 100-plus pounds of weight for better performance and improved fuel efficiency.

Available only in rear-wheel drive (RWD), the 2016 V12 Vantage S and V12 Vantage Roadster each pack Aston Martin’s awesome 6.0-liter V12 engine, putting out 565 hp and 457 lb-ft of torque under the management of the Sportshift III 7-speed auto-manual transmission, which was introduced last year. Reviewers laud the auto-manual's smoothness on the highway or the track, but warn of a tendency to choppiness at lower speeds. The power figures above also represent an 11 hp, 37 lb-ft improvement on the original V12 Vantage, which debuted in 2013, and are a direct result of CNC-machined combustion chambers and weight-saving hollow camshafts.

EPA mileage estimates for the V12 remain 12 mpg city/18 highway/14 combined. The V12 Vantage S will go from 0 to 60 mph in 3.7 seconds and has a top speed of 205 mph. The V12 Vantage Roadster, which totes some additional weight despite the fabric roof, tops out at 201 mph. Each V12 Vantage can be equipped with an available driver-selectable Sport mode that adjusts throttle response, shift points, and even the already grin-inducing engine note to further widen your driving horizons. Also available is the selectable 3-stage suspension damping system (with Normal, Sport, and Track settings) that makes the V12 Vantage one of the most agile country cruisers in its class.

On the exterior, look for newly redesigned 19-inch alloy wheels, LED taillights, and heated power-folding outside mirrors. Inside, expect both the coupe and the convertible to sport premium leather upholstery, power-adjustable sport seats, memory for driver settings, and full power accessories. Cruise control and telescoping tilt-wheel steering are once again standard, as are an auto-dimming rear-view mirror, a remote garage door opener, and rear parking sensors. The 2016 V12 Vantage Roadster features a power-opening/closing convertible roof that can be operated at speeds of up to 30 mph.

The V12 Vantage S offers 10.6 cubic feet of trunk space, the Roadster significantly less due to its stowable convertible roof.

Options include heated seats, a rear-view camera, front parking sensors, various exterior badging and trim enhancements, a 600-watt Aston Martin premium stereo, and a 1000-watt Bang & Olufsen audio system. There’s even an available driving course to help you get the most out of your new ride.

Despite the advantages of Aston Martin’s V12 Vantage, rivals such as Jaguar’s similarly equipped and powered F-TYPE R and Chevy’s power-packed Corvette Z06 boast just as much driving panache at a far more manageable MSRP. Other challengers, like the Porsche 911 and Audi R8, offer significantly more refinement at a similar cost.

Have you driven a 2016 Aston Martin V12 Vantage?
Rank This Car