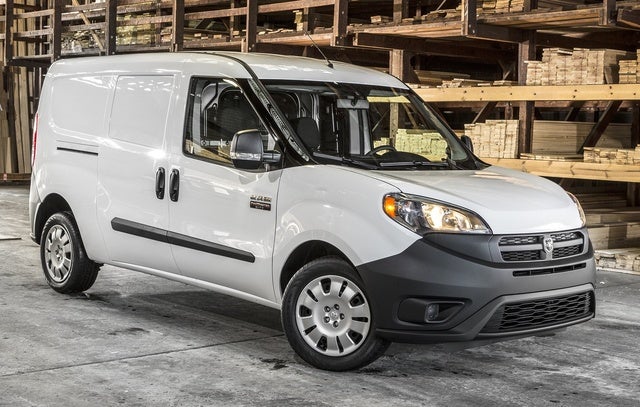 There is, as they say, a tool for every job. That’s a fact I’ve come to understand firsthand since moving into a house in need of a few repairs, each of which has required yet another trip to Home Depot. For refinishing woodwork, I needed a palm sander and not an angle grinder; for the stone stairs, I opted for a small trowel and a bit of concrete patch instead of calling in a multi-ton mixing truck; and for spreading mulch, I figured a Bobcat would be overkill (but fun), so tackled the task with a wheelbarrow and shovel.

Selecting the correct implement carries over into the automotive realm, too, which has led to the debut of the 2015 Ram ProMaster City. This diminutive version of the full-size Ram ProMaster will compete with the Nissan NV200, the Chevrolet City Express (a rebadged NV200) and the redesigned Ford Transit Connect. A single wheelbase and height configuration will be available.

Based on the FIAT Doblo, a model sold globally for well over a decade, the new ProMaster City arrives stateside with distinct front-end styling, the requisite Ram nomenclature and a 2.4-liter 4-cylinder engine that’s good for 178 hp and 174 lb-ft of torque. Typically, you could expect to see that 4-banger paired with a 5- or 6-speed automatic gearbox, or even a continuously variable transmission (CVT), but Ram has equipped this front-wheel-driver with a 9-speed automatic. According to the company, that powertrain component will contribute to best-in-class fuel economy, though at the time of this writing, exact figures aren’t available to back up that claim. When they are announced, they’ll need to be greater than the EcoBoosted Ford Transit Connect’s 20 mpg city/30 highway/25 combined ratings.

One thing you won’t hear Ram bragging about is the ProMaster City’s performance: A run from 0 to 60 mph takes a leisurely 9.8 seconds. However, aside from contractors who are chronically late with their deliveries, that’s not likely to be an issue for shoppers considering this little Ram van. More important are specs that include 131.7 cubic feet of cargo space and a maximum payload capacity of 1,883 pounds; by comparison, the 2014 Ford Transit Connect can accommodate a 1,710-pound payload and offers a long-wheelbase variant featuring up to 149 cubic feet of cargo room. From that perspective, there’s no clear winner, but Ram may hold an ace up its sleeve with a rear coil-spring suspension in lieu of the more common leaf-spring setup. The end result should be superior ride and handling characteristics.

When it comes to selecting a specific 2015 ProMaster City, Ram makes the process fairly simple by offering four basic versions, starting with the 2-passenger Tradesman Cargo van, with or without rear windows. Standard features include basics like 16-inch steel wheels and dual sliding doors, as well as a USB port and steering-wheel-mounted audio controls. A Tradesman SLT Cargo variant tweaks things a bit with fog lights, unique steel wheels and additional body-color exterior trim. The ProMaster City can also be ordered in 5-passenger Wagon or Wagon SLT guises, equipped with a rear 60/40 fold-and-tumble split bench seat, headliner and carpeting, and a rear cargo cover.

On the technology front, the ProMaster City promises to keep occupants connected and entertained with an optional navigation system, a rear-view camera and backup sensors, a 5-inch touchscreen Uconnect system featuring Bluetooth connectivity and text-messaging capabilities, and more.

Pricing information will be released closer to the ProMaster City’s on-sale date, which is expected to be this fall or early 2015.

What's your take on the 2015 RAM ProMaster City?

Users ranked 2015 RAM ProMaster City against other cars which they drove/owned. Each ranking was based on 9 categories. Here is the summary of top rankings.

Have you driven a 2015 RAM ProMaster City?
Rank This Car

I was told I needed a fuel pump and its supposed to be in the fuel tank? My question is, is there an access from inside the van floor?

649 views with 4 answers (last answer about a year ago)

Hello, I want to know which Relay uses the radiator fan

Why Is The Suggested Price For My Vehicle $2000 UNDER Kelley Blue Book, And...

where can I find a diagram and description of the relays in the fuse box for a 2015 promaster City?

Couple Of Cars RAM 2015 Are Sold Or Not Available, Please Update Your Listi...