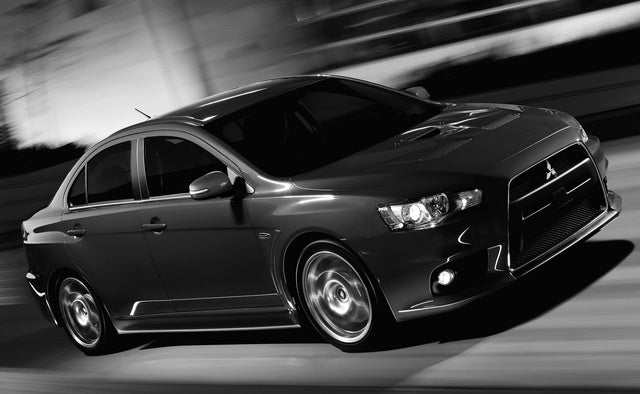 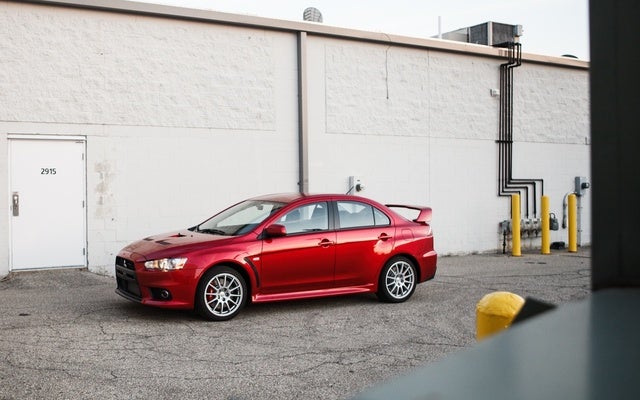 Say goodbye to Mitsubishi’s Lancer Evolution after the 2015 model year. The Japanese automaker, claiming they’re “going in a different direction," will cease production on this 5-passenger compact sports sedan, thus ending an era of genuinely exciting commutes. Instead, possibly for the 2016 model year, the Evolution brand will be attached to a whole new vehicle, possibly a plug-in hybrid.

But that’s then, and this is now. For its swansong year, the Lancer Evolution, often referred to as the “Evo," offers few changes from last year’s iteration. It still comes in 2 trims, the stick-shift GSR and the auto-manual-equipped MR. Both, of course, tote standard full-time all-wheel drive (AWD) and both still offer spiffy handling and a peppy turbocharged powerplant. Trunk space, however, remains at a premium, providing only 7 cubic feet of capacity. Curiously, Mitsubishi decided some time ago to stash the battery and windshield-washer fluid reservoir in the Lancer Evolution’s trunk, and to add insult to injury, the rear seatbacks don’t fold down. Thus luggage schlepping remains problematic.

Nevertheless, for 2015, this performance-oriented 4-door sports a turbocharged 2.0-liter inline 4-cylinder engine mated with a 5-speed manual transmission in the GSR and a 6-speed dual-clutch Shiftronic auto-manual transmission in the MR. In either case, look for 291 hp and 300 lb-ft of torque from the 4-cylinder, while EPA estimates remain a sort of scary 17 mpg city/23 highway for the stick-lift-toting GSR and 17/22 for the automatic-packing MR.

For their final performance, both Lancer Evolution iterations will again sport 18-inch alloy wheels, a rear spoiler and full power accessories, along with cloth upholstery, sport front seats, cruise control and tilt-wheel steering. Climate control returns for 2015 editions, as do a leather and alloy steering wheel, a leather-trimmed shift knob (GSR only) and Bluetooth hands-free calling.

Entertainment, meanwhile, is offered via a 140-watt stereo that sports a single-CD player, 6 speakers, satellite radio and an auxiliary audio input (USB port).

What's your take on the 2015 Mitsubishi Lancer Evolution?

GuruZ4HZ6 It was a car to be driven hard and to look at as a sweetheart. Going to miss it

Users ranked 2015 Mitsubishi Lancer Evolution against other cars which they drove/owned. Each ranking was based on 9 categories. Here is the summary of top rankings.

Have you driven a 2015 Mitsubishi Lancer Evolution?
Rank This Car

I am trying to buy a car with CarGurus but the dealership that has the car doesn’t have any credit line and I want to know what would be the next step for me to get the car?

I have a device in my car thats wired and it says freqency and rev and normal and has a button to it,dont know what it is

What Are Good Starter Mods For An Evo X? I'm New To The Modified Life And J...