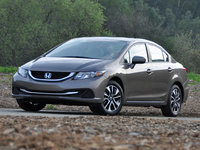 Anyone who can’t recognize the Honda Civic’s multiple rays of automotive sunshine for what they are is a crank pot, a nattering nabob of negativism, and you don’t need people like that in your life. 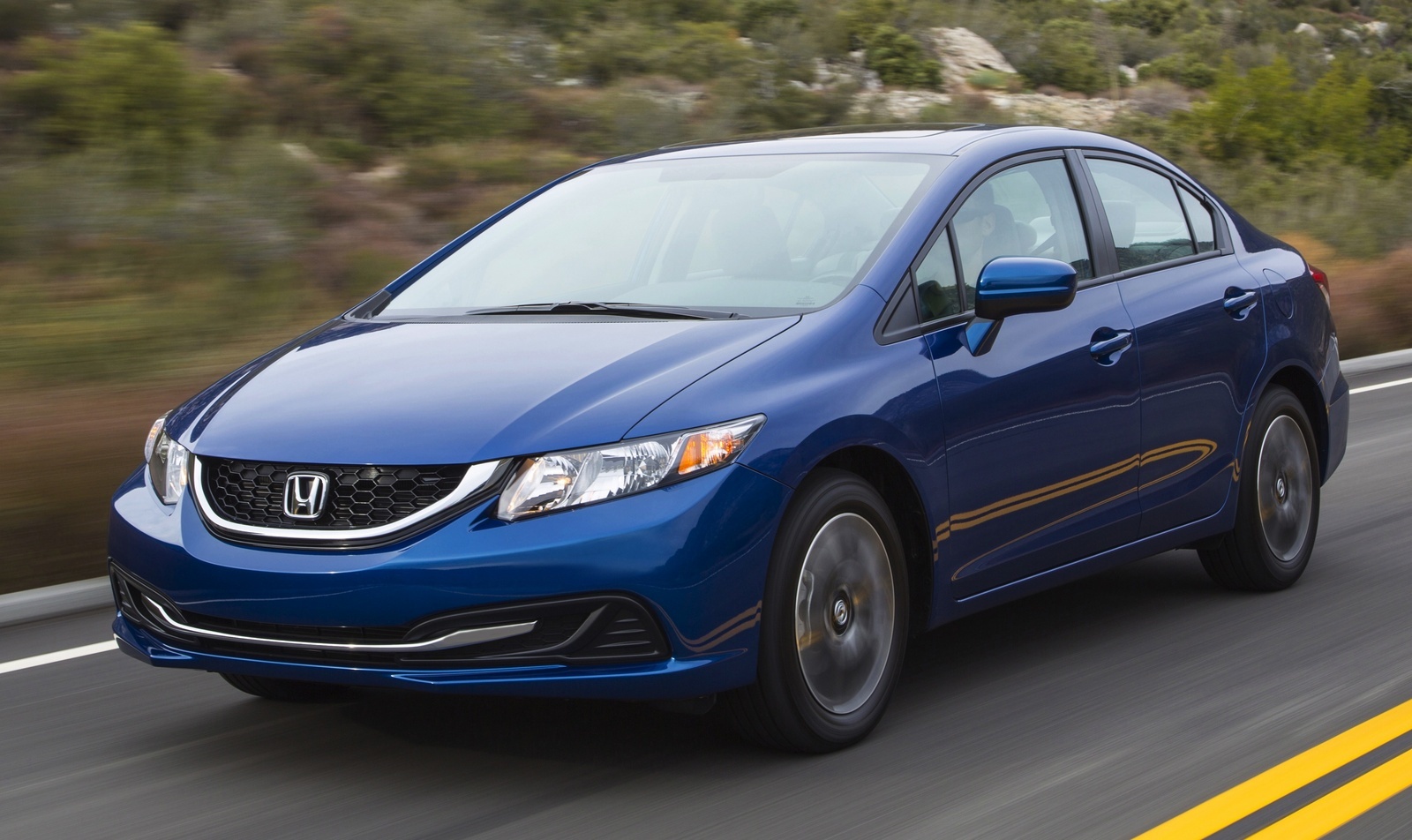 The 2015 Honda Civic meets and exceeds small-car buyer preferences for reliability, safety, fuel efficiency, quality, and value without so much as breathing hard. It’s everything you’d expect in a compact economy sedan, and so much more. 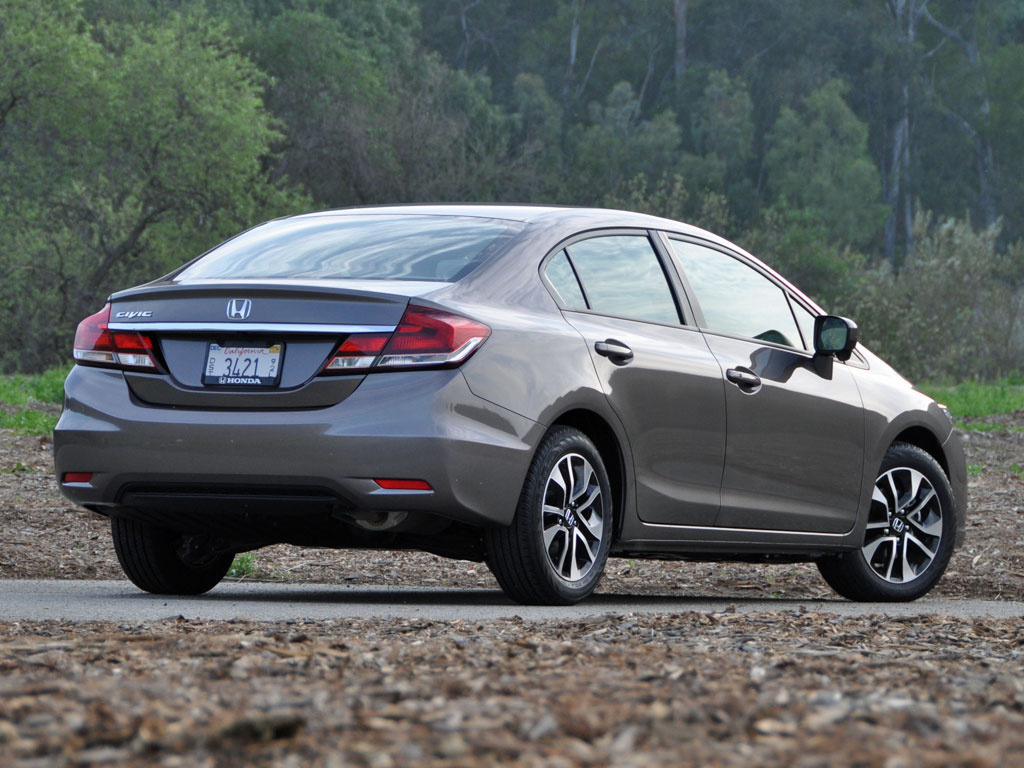 Anyone who can’t recognize the Civic’s multiple rays of automotive sunshine for what they are is a crank pot, a nattering nabob of negativism, and you don’t need people like that in your life. Seriously, how can you argue with such high reliability ratings? Top safety scores? Effortless fuel economy in the low 30-mpg range? Through-the-roof residual values? You can’t. But the Civic goes beyond mere scores and metrics to earn your loyalty. It actually has some personality and zing to boot.

Honda sells the Civic in coupe and sedan form, and in a variety of trim levels designed to serve widely diverse customers. Base LX trims are the most affordable, the Civic Hybrid is the most efficient, and the performance-tuned Civic Si variant is the one that’s the most fun to drive. You can even get a version of this car that runs on natural gas.

For this test, I drove the version of the Civic most people buy: the EX Sedan, one painted Urban Titanium Metallic and priced at just over $22,000. This mild-mannered version of the Civic Sedan includes a continuously variable transmission (CVT), a 7-inch touchscreen infotainment system with HondaLink connectivity and services, automatic climate control, LaneWatch technology, push-button engine start, a power sunroof, automatic headlights, and a nice set of aluminum wheels.

No, my Civic test vehicle wasn’t pretty or sexy. In fact, it’s a little boring despite the futuristic, swooping exterior styling theme that’s now almost 10 years old. I’m hoping that when Honda next redesigns this car it will regain a crisp, clean, pert visage similar to that of Civics past. The interior design is aging, too, but remains so unusual as to still look and feel fresh. Plus, it got an extensive upgrade last year; quality materials and attention to detail never go out of style. 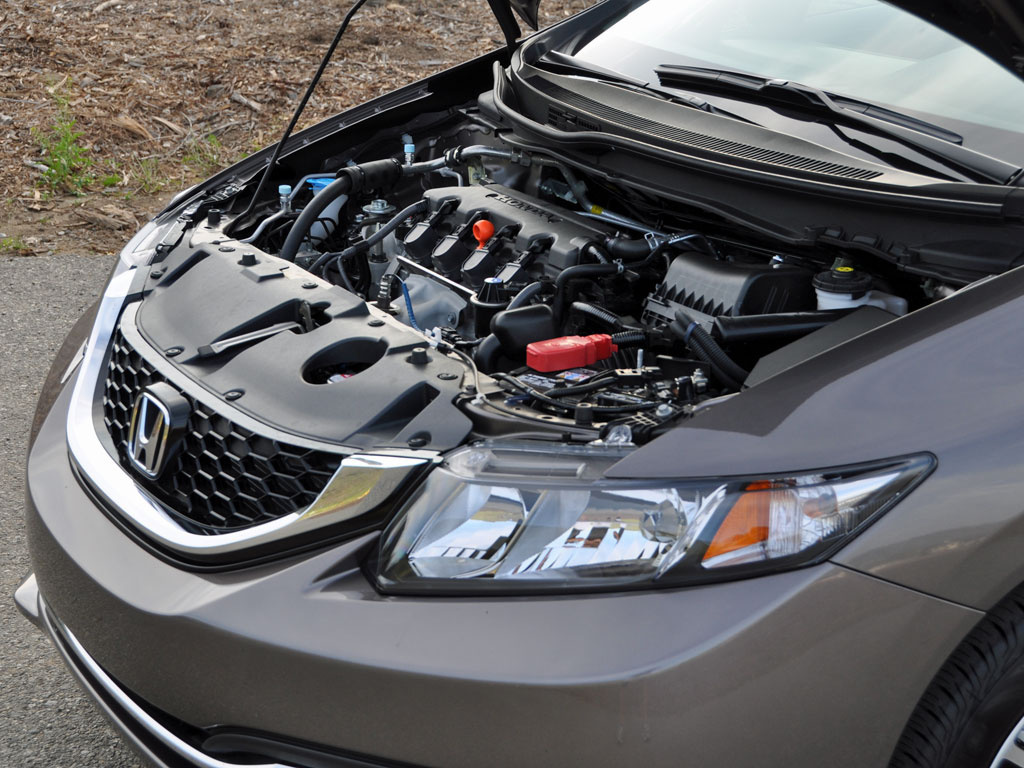 Although my Civic EX Sedan test vehicle wasn’t particularly fast, it was surprisingly fun to drive, so add that to this Honda’s long list of attributes. In most Civics, a 1.8-liter 4-cylinder engine generates 143 hp, and the remarkably refined CVT makes the most of that power in order to make merging onto the freeway or climbing mountain grades relatively effortless. For those who find the notion of a CVT alienating, Honda has even dialed in algorithmic “gear changes” so that it “feels” more like a traditional automatic transmission when the driver is accelerating.

If you’re wondering how quick this Civic is, independent publications have timed the car’s acceleration to 60 mph at a hair over 9 seconds. It feels faster than that, though, thanks in part to an engine that revs with spirit. As far as fuel economy is concerned, the EPA states that the Civic should get 33 mpg in combined driving. I averaged 31.9 mpg, driving without the car’s Econ mode engaged. Perhaps if I’d pushed the little green button to the left of the steering wheel, I’d have come even closer to hitting EPA projections.

It isn’t a fast car, but the refined Civic’s driving dynamics dazzle thanks to a taut and athletic suspension that makes the car feel light, lively, like it dances around corners. Composed and connected, yet soaking up the big bumps and zits that dot the surface of most roads, the Civic’s suspension displays tossability complemented by effortlessly precise steering. Yes, the Civic Si model is engineered to deliver more outright grip and fun, but even mainstream versions of the Civic never fail to impress when it comes to handling. 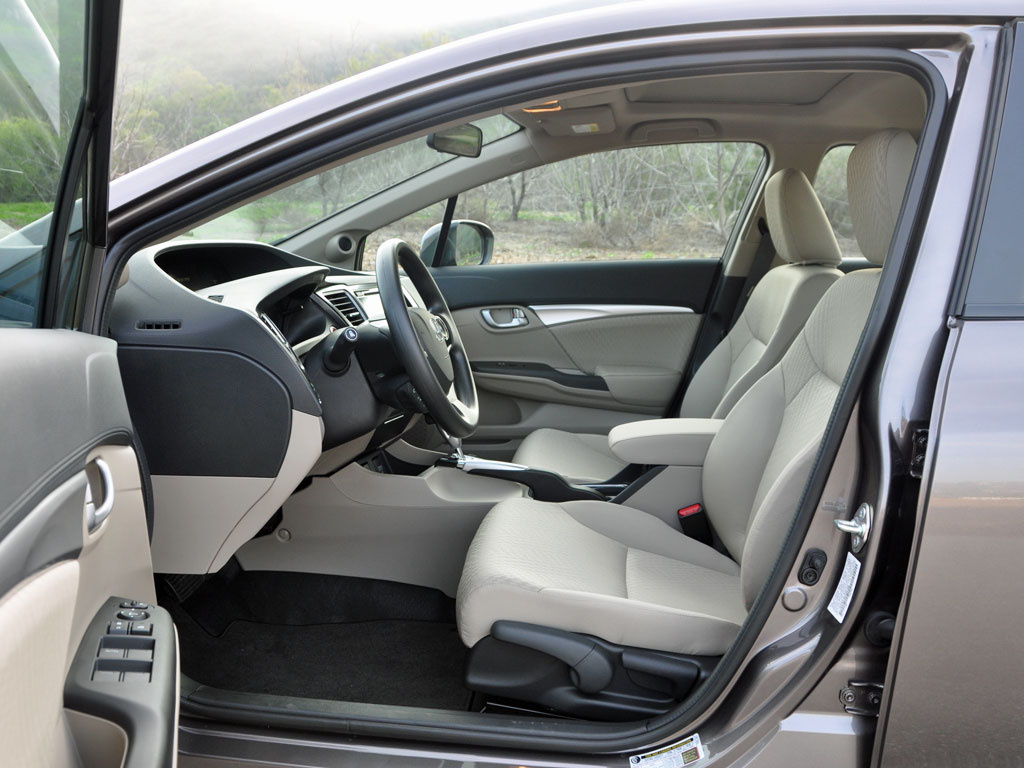 The Civic may be considered a compact car, but hop inside and you'll find a surprising amount of space for its passengers and their things. Look around, and you’ll find plenty of thoughtful trays, bins, nooks, and crannies in which to store your odds and ends. Best of all, they’re situated in a cabin that’s crafted with refinement, made with quality materials and exhibiting close attention to detail. The Civic is not fancy, but it’s nicely done, and it doesn’t make you feel like you’re stuck driving an economy car.

Better still, the front seats are perfectly comfortable, and outward visibility is excellent in every direction thanks to the Civic’s slender roof pillars and large side mirrors. Front passengers do not get a seat-height adjuster, but thankfully the seat is mounted high enough above the floor that this omission is not an issue.

Rear seat passengers are comfortable, too, as space in the back is a lot more generous than the Civic’s tidy dimensions might suggest. Trunk-wise, the Civic offers 12.5 cubic feet of space, but the flat and wide layout makes the cargo area seem roomier than that. Expand room by folding the 60/40-split rear seatbacks. 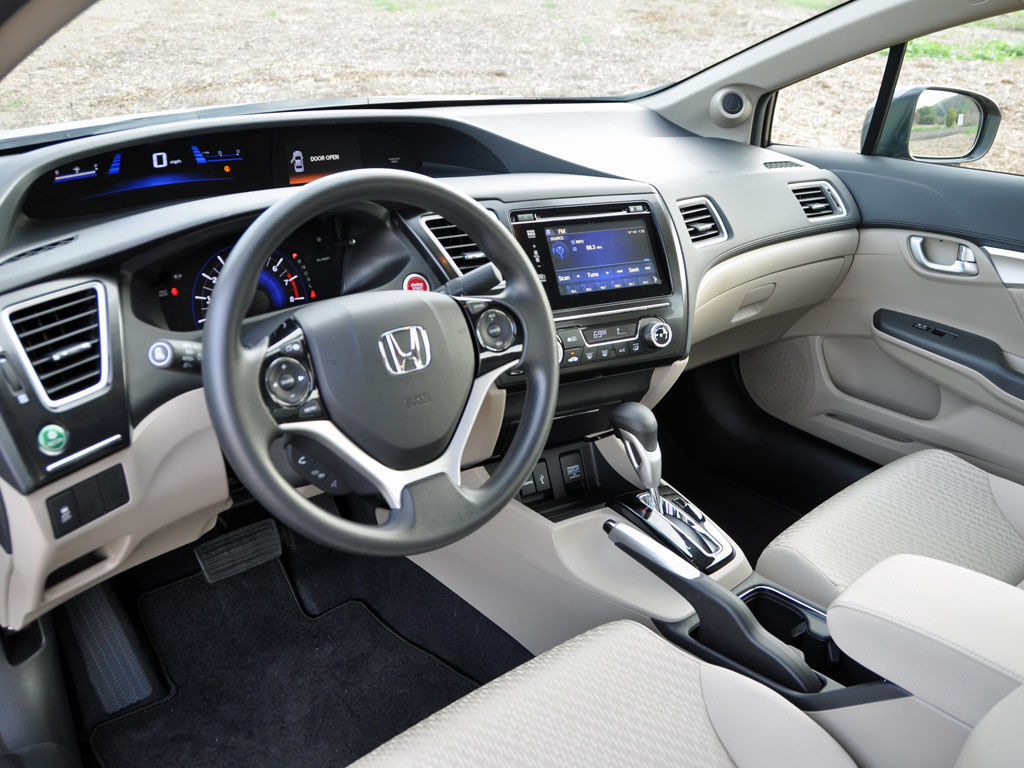 The 2015 Civic trends ahead of the curve when it comes to keeping drivers informed and entertained while traveling. Every 2015 Civic is equipped with Bluetooth calling and text-messaging, and if you upgrade beyond the LX trim level, you’ll get the automaker’s touchscreen infotainment system with HondaLink smartphone connectivity and services technology.

With HondaLink, Civic owners can access social media platforms, Internet radio stations, audio books, podcasts, and more through an Aha Radio app. The system also supports a navigation app and a variety of third-party apps, all running through your paired smartphone. A HondaLink Assist collision-notification system is also active when you’ve paired your device to the system and indicated that you would like this feature to automatically call the authorities in the event of a collision. Pair an iPhone to the system and Siri Eyes Free technology works via the voice-recognition system.

The 7-inch touchscreen display is also rather Apple-like, responding to taps, swipes, and pinches just like your favorite tablet computer. Of course, when you go over a bump and accidentally direct the screen to do something you never intended, the whole high-tech approach causes aggravation, but that’s a common problem now that this type of technology is commonplace in compact cars. Nevertheless, the Civic’s system is familiar, easy, and comprehensive, a refreshing approach when it comes to infotainment systems. 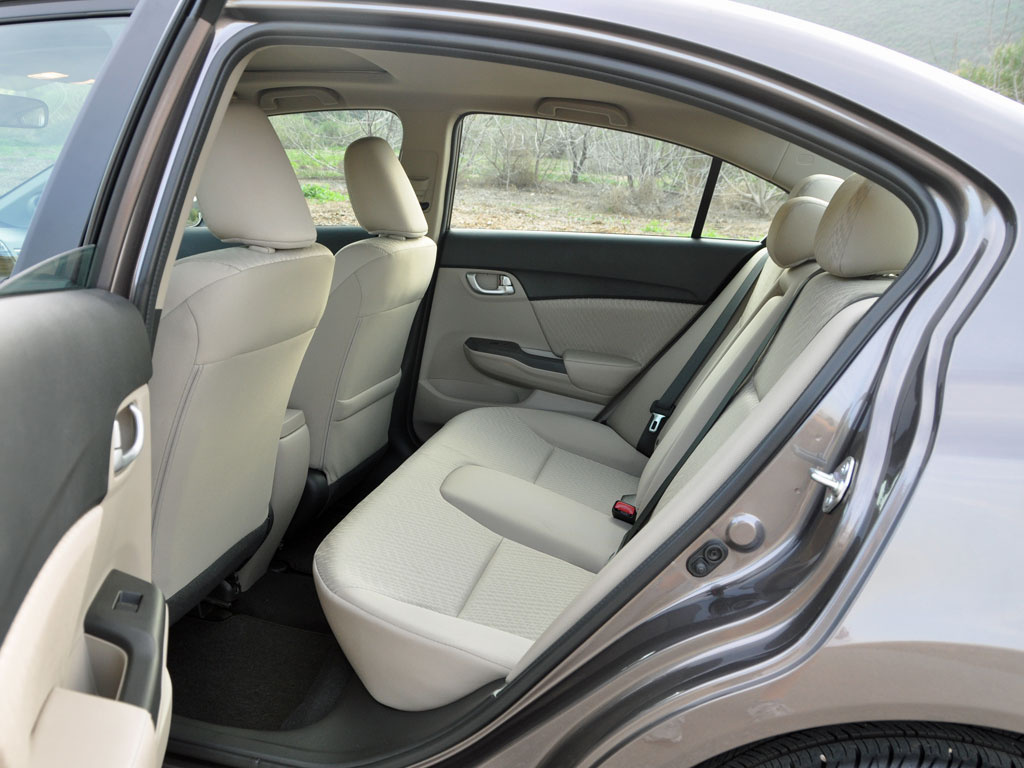 If you’re looking for a small, affordable, and safe car, the Honda Civic Sedan is a total rock star. In addition to a 5-star overall crash-test rating from the NHTSA and a Top Safety Pick rating from the Insurance Institute for Highway Safety (IIHS), the Civic is equipped with a standard reversing camera. Also, don’t forget about the HondaLink Assist service described in the previous section.

Where Honda stirs the pot of controversy is with regard to the LaneWatch system that is standard for all but the Civic LX and SE trims. LaneWatch installs a camera on the Civic’s right mirror, and when you manually activate the camera or use the right turn signal, it shows what is alongside the car on the dashboard’s touchscreen display. The idea here is for the system to eliminate the right blind spot. What about the left side, you ask? All you get is an expanded-view mirror for that.

Personally, I’d much prefer a traditional blind-spot monitoring system that lets you know if a vehicle is in your blind spot with a brightly illuminated icon on the sideview mirrors. In my opinion, LaneWatch is not intuitive and adds another reference point to check before switching lanes. As a result, it also adds distraction. C’mon, Honda. Let’s stick with what works. 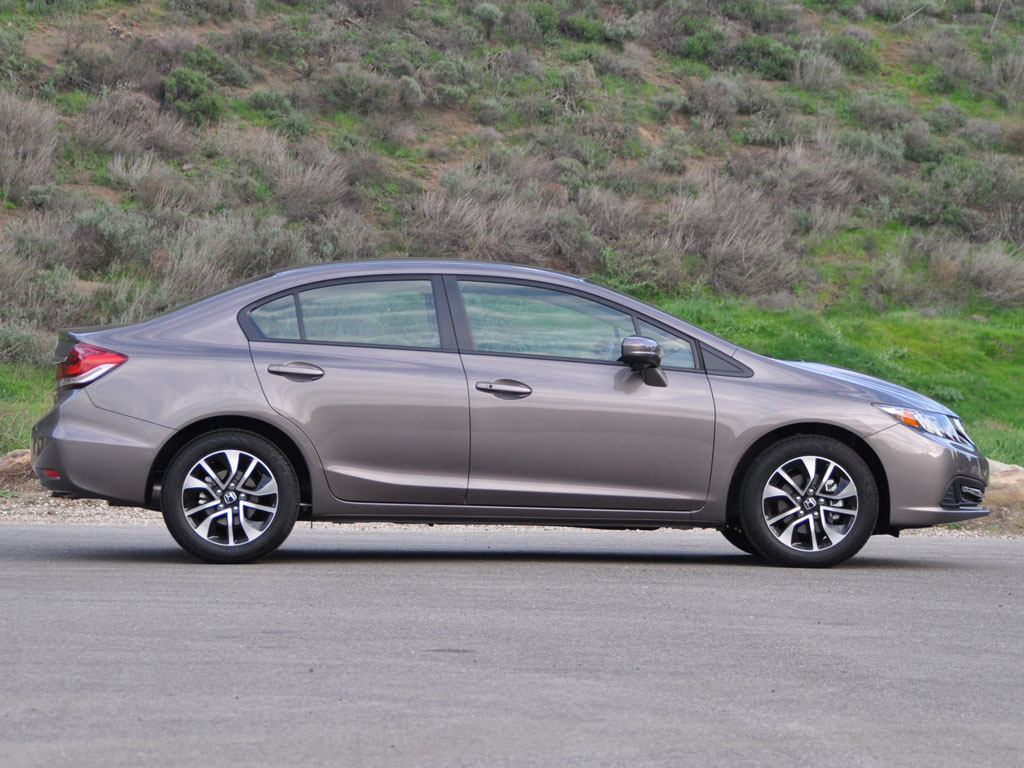 Thanks to the Civic’s ability to hold its value over time, there is always a good lease deal available on this car, especially if you’re willing to get the least expensive LX model. Aside from lease deals, Honda occasionally offers low-rate financing for limited-term loans, but rarely, if ever, slaps a rebate on the Civic’s hood. That doesn’t mean dealers won’t provide a discount, just don’t expect to get as screaming a deal as the guy choosing, say, a Dodge Dart.

This approach doesn’t appear to hurt Civic sales much. It is one of the best-selling vehicles in the country, top-rated for reliability, an impressive performer in quality surveys, and inexpensive to insure and own. Plus, as of 2015, the Civic comes with 3 three years or 36,000 miles of free roadside assistance. That means that if you get a flat tire, someone will come and help you to change it. Add the Civic’s effortlessly good gas mileage, and you’ve got one cost-effective set of wheels.

TheHorror You are clueless when it comes to cars. Have you exclusively driven minivans up until now, that you consider this “fun”?

Users ranked 2015 Honda Civic against other cars which they drove/owned. Each ranking was based on 9 categories. Here is the summary of top rankings.

Have you driven a 2015 Honda Civic?
Rank This Car

677 views with 3 answers (last answer about a month ago)

I have a 2015 honda civic, over the past few months I have had problems with it starting. When I dont drive it consistently, sometimes it happens days I drive the day before too, when I get into the...

I took my car in for an oil change and the mechanic mentioned that the transmission is supposed to have a plug and that mine is missing. I called the dealership and they said this year doesn't have ...

How Do You Bleed Air From A Newly-installed Fuel Line On A 2015 Civic EX ?

After Removing And Replacing My 2015 Honda Civic It Won't Start