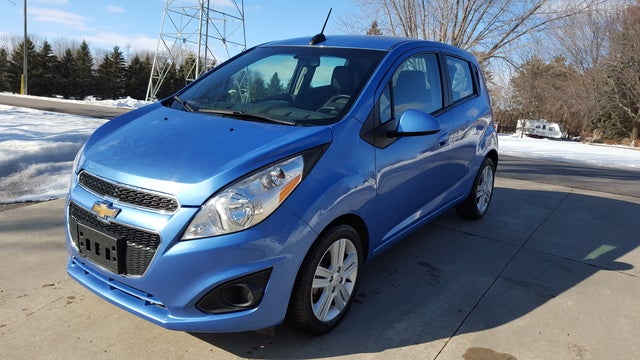 Chevrolet's little friend enters 2015 with an air of anticipation, but no reported changes—yet. The rumor mill abounds with news about the next-generation Spark set for a worldwide debut next year, which includes our version even though it's only been here for 3 years now, but there's no official word on anything changing for 2015.

The Chevrolet Beat—as it is known overseas—is an aging model, however, having been around the block there since 2009. Sales here need no help whatsoever, as they're out-pacing company forecasts by as much as 35%, but Chevrolet is reportedly interested in syncing all of its markets at once. That said, all we know for sure at this point is that the style will get an update on a new chassis without any solid news on what engines might make it to U.S. markets, let alone features.

As it stands right now, the Spark's surprisingly substantial feel is one of its high points. For a budget subcompact hatchback, the Spark neither rides nor looks much like the "budget" part of its class. Year after year drivers comment on its fun yet predictable driving character, excellent fuel economy, easy-to-use interior technologies, remarkable passenger space and above-class accessibility with nary a complaint.

To be sure there are far more powerful engines in subcompacts these days, but the Spark differs in its ability to handle everything its engine can put out without any jerky surprises. Its little 1.2-liter 4-banger musters only 84 hp and 83 lb-ft of torque, but that's plenty to propel the Spark up 60 mph in a very class-competitive 10.5 seconds. You won't find another equally priced subcompact with similar performance, but spend a few grand more and you might get a second shaved off that time.

Front-wheel drive is obligatory, but that simplified drivetrain with its 5-speed manual transmission needs only 31 mpg city/39 highway for all that giddy-up, or 30/39 with the optional continuously variable transmission (CVT). Here again, you'll be hard-pressed to find similar figures for the same price, but none of those options would drive nearly as well as the Spark.

Offering room for 4 passengers and 11.4 cubic feet for cargo with all seats upright or 31.2 cubes otherwise, the Spark is almost as utilitarian as Honda's Fit, but the Spark's rear bench isn't quite as magical—flipping the cushions and removing the headrests still gets only a relatively flat cargo area. It's still better than the FIAT 500 in both rear elbow room and cargo capacity, but the FIAT's back seat might be easier to flatten.

Features in the base LS are both surprising and Spartan, including OnStar and a digital multifunction display by default, but little else. Expect to opt up to the 1LT for features like cruise control, power-adjustable mirrors, steering-wheel-mounted controls and a 6-speaker stereo with USB, iPod, satellite radio and Internet radio connectivity. The 2LT tops out the range with features like roof rails and heated front seats, but none of the trims can opt for anything—not features in other trims, and nothing extra either.

What's your take on the 2015 Chevrolet Spark?

Alukowsky 1st new car after decades of buying used rice burners and 1 used convertible. It's a funny-looking li'l beast, but I LOVE the way it handles! Only things I dislike are the self-locking doors, touch-screen radio. andOn-Star which came w/vehicle and which I did NOT activate, but sends a disembodied voice every few months stating that I have limited On-star services!

Users ranked 2015 Chevrolet Spark against other cars which they drove/owned. Each ranking was based on 9 categories. Here is the summary of top rankings.

Have you driven a 2015 Chevrolet Spark?
Rank This Car

What Can I Do To Turn The Car Lock Symbol Off

My car is not starting. The car and lock symbol is on. What can I do

all tiers are inflated at 32 psi chcked at two difrent gas stops.

My Chevy Spark has started overheating for some reason. I changed the thermostat but still overheating. Should I change the coolant temp sensor coming out of the radiator before I try to tackle th...

96 views with 4 answers (last answer about a year ago)

My daughter owns a 2015 spark. She just had the transmission replaced under factory warranty. The new transmission is acting up again. Is there an electronic issue causing this? Or is it A run of j...

Hi! Around 8 months ago, I noticed that when I would be about 45 minutes into a trip (highway speeds), my Spark's RPMs would suddenly jump (usually from about 2000 to 5000, without any prompting (...