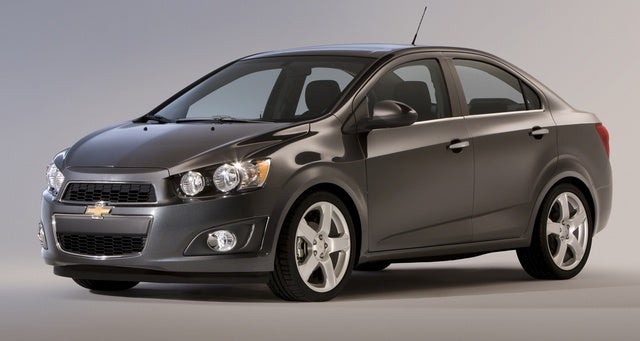 Average user score
3 ⁄ 5 stars
Based on 8 reviews
Review by Gustavo — The LTZ model we bought has great features only found in more expensive models. Great car with good fuel economy Read more
Review by Longchamp_580 — Small, but thats what subcompact cars are supposed to be. Read more
Review by Aaron — Too over priced for the extensive milage. Otherwise good car for gas saving. Read more 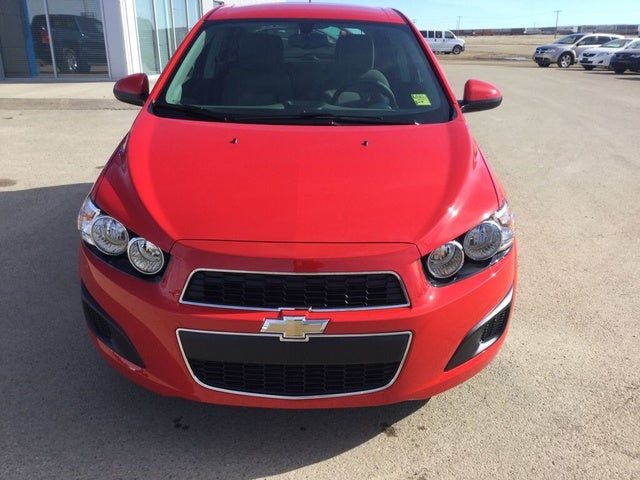 Thinking about getting a smaller sedan for the commute, or a pint-size hatchback for some semi-serious schlepping? You might want to take a look at Chevrolet’s 2015 Sonic lineup. This 5-passenger subcompact is available in either configuration and for this upcoming year adds a couple of new trims, the posh-leaning Dusk sedan and the sporty RS sedan, to the mix. The former has been on the drawing board for some time now and is finally getting into production, while the latter has been offered in hatchback garb from the get-go. Also new for the 2015 Sonic is GM’s touted 4G LTE WiFi hotspot technology that looks to be standard in higher trims and optional for select lower trims.

With the debut of the new RS sedan and Dusk sedan versions, look for this pint-size people hauler to come in the base LS, the lower-midlevel LT, the up-featured LTZ and the penultimate RS trims in both variations, with the Dusk sedan now reigning supreme in both plush and price. Of course, trunk space remains 14.9 cubic feet in 4-door versions, while cargo area in hatchback Sonics is once again some 47.7 cubic feet with the rear seatbacks folded. Fear not, however—the sedan iterations all get split-folding rear seats for a little more toting room without backseat denizens.

Base power for all but the RS and, of course, now the Dusk, remains a normally aspirated 1.8-liter inline 4-cylinder (I4) engine that throws down 138 hp and 125 lb-ft of torque and returns managed by either the traditional (and standard) 5-speed manual transmission or an optional 6-speed automatic gearbox. Mileage is a so-so 26 mpg city/35 highway in stick-shift variants, 25/35 in automatic-toting editions.

For the sport-oriented RS and the brand new Dusk 4-door, expect the return of last year’s peppy 1.4-liter turbocharged I4, as well as the transmission twain that includes either the standard 6-speed manual shifter or the available 6-speed automatic. Mileage for the turbo 4 should again run an impressive 29/40 in stick-shift versions and 27/37 in automatic-equipped editions, though the RS trims will doubtless remain sporting more aggressive gearing in both the manual and the automatic transmissions for quicker acceleration. Alas, mileage numbers in the jauntier Sonic RS variants suffer a bit at 27/34 in manual versions and 25/33 in automatic-laden variants.

In any case, standard features in the base Sonic LS (hatchback and sedan) for 2015 are expected to remain 15-inch steel wheels, cloth upholstery, remote keyless entry, telescoping tilt-wheel steering, OnStar Directions and Connections (via Bluetooth), air conditioning and AM/FM stereo sound through 4 speakers.

The RS, in both hatchback and now the new sedan versions, brings back memories of yesteryear’s Sonic in boasting a sport-tuned suspension, along with sportier exterior trim, a sport steering wheel and alcantara leather upholstery. And finally, the brand-new touring-oriented Sonic Dusk sedan is slated to sport a unique body kit, 18-inch alloy wheels, leather upholstery with distinctive stitching and standard MyLink audio and infotainment with an upsized dashboard display and of course the above-mentioned 4G LTE techno-bling.

Many of the standard features found in higher trims can again be ordered as optional equipment in lower trims, while the 2015 Sonic LTZ and RS sedan and hatchback, as well as the debuting Dusk sedan can be delivered with an available power sunroof and with the optional Advanced Safety Package, featuring forward-collision alerts and lane-departure warnings. Finally, GM’s BringGo smartphone-app-integrated navigation is also available to the LTZ and higher trims via the new OnStar-integrated 4G LTE installation which also comes with a 3 month, 3GB trial subscription.

What's your take on the 2015 Chevrolet Sonic?

WihelmScreamy I have been driving a Sonic sedan for several days as a rental. It's not at all a bad car, but it has some problems, and no stand-out features or qualities. I don't like the exterior styling much; the first time I noticed the design crease that runs along the lower part of the side, I thought it was dented. The interior design is actually nice; the seats have patterned cloth, which is a nice change from the monochrome seat trim in most cars. Front seats are comfortable, driving position is good, and mirrors are well situated. The trunk is appropriately sized for the car. The back seat is probably cramped for adults. The Sonic performs decently, but has terrible gas mileage (especially for a car this small). Or it has decent gas mileage but drives like a bus. Your choice! I went with the former and average less than 30 mpg in mixed driving. The design of the stereo is nice, with large, clearly labeled buttons and controls. Syncing my Bluetooth iPhone was confusing at first; you have to sync it as a phone and a music source separately, to two separate devices. The phone device always connects quickly, but sometimes I have to go into settings on my phone and select the music device for it to connect. It's also buggy; when I'm using navigation on my phone without music, it often tells me that my Bluetooth phone call is beginning before it tells me the next direction, and then tells me my Bluetooth phone call has ended (I'm not making a call at all at the time). It doesn't display any music information on the stereo screen. You can't connect the Bluetooth phone function to an ongoing phone call (for example, if you are on a call when you enter the car). The car doesn't have USB, but does have a convenient 12-volt socket between the front seats. For a very cheap car, it has a lot of options (Bluetooth, decent stereo, power windows/locks/trunk). That said, I won't be buying one (I'm shopping for a car); the inability to have power and economy is not something competitors have a problem with, and something like the Hyundai Accent or Honda Fix is nicer, more attractive, more powerful, and has better fuel economy. They do cost more, though.

CarolynRH VERY helpful review as I begin to separate the different trims of the Sonic!

Users ranked 2015 Chevrolet Sonic against other cars which they drove/owned. Each ranking was based on 9 categories. Here is the summary of top rankings.

Have you driven a 2015 Chevrolet Sonic?
Rank This Car

What Could Be Wrong With The Car?

I recently purchased a 2015 Chevy Sonic LT and I am already experiencing issues. The vehicle enters an engine reduction mode where it doesn’t allow you to accelerate past a certain speed for safety...

17 views with 3 answers (last answer about a week ago)

Why Did Distance To Empty Change?

Why did the distance to empty change from 275 miles to 135 miles on 3/4 tank of fuel after replacing purge valve canister and resetting engine light by disconnecting and reconnecting negative batte...

Cranked car and new vibration (sound/feel more than shake.) About an hour later check engine light came on. Since near dealer took to them to read code PO420, but made appt to come back. My questi...

Can I use mobil1 esp 5w30 oil in a chevy sonic 2015. It says that the oil is also good for gasoline engines with catalytic converters