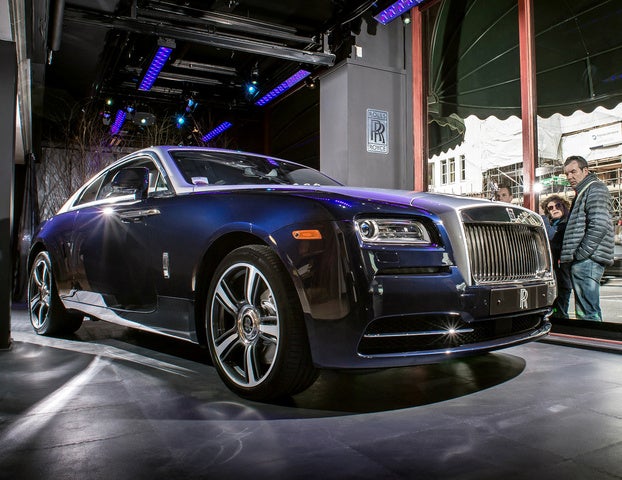 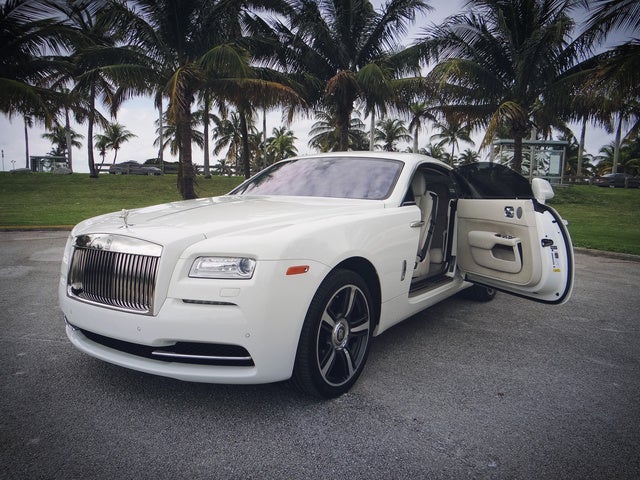 Making its debut for 2014, the new Rolls-Royce Wraith 2-door luxury coupe draws its name from the original Wraith, which was built by the automaker in 1938 and '39. That original vehicle, powered by an inline 6-cylinder engine and clocking a top speed of 85 mph, made a number of appearances in movies and helped build the Rolls-Royce brand, although it was delivered only as a chassis, with bodywork created by other companies to owners' specifications.

The new version of the Wraith, produced at the automaker's assembly works in Goodwood, England, takes the concept of a world-class luxury coupe to new heights. Rolls-Royce calls the new Wraith its most powerful and most technologically advanced car ever, and the numbers and equipment list support that claim. Features like a 624-hp twin-turbo V12 engine, a satellite-aided transmission and a leather- and wood-draped cabin described as "yacht-like" by the automaker are just the beginning and firmly position the Wraith as the epitome of the automaking art.

The fun starts outside, where the Wraith displays an aerodynamic fastback body style, a high sideline and a low roofline, as well as a wide stance. A relatively short wheelbase and an aggressive front end give the Wraith a hunky look, while styling cues like the rear overhang, frameless rear-hinging coach doors and iconic Rolls-Royce grille adorned with the Spirit of Ecstasy are brought forward from an earlier era. However, the fastback body style draws more on Italian than British design heritage. Up front, the Pantheon grille, with its deep-set vertical slats, serves not only as a design statement but also as an air intake, while a second black mesh intake below the bumper complements the grille. Rolls-Royce does away with a traditional B-pillar, resulting in a clean, open side profile with the windows down. Adaptive headlights, stainless-steel door handles, chrome side finishers, standard 20-inch wheels and dual exhausts at the rear add visual flair, while available two-tone paint combinations help the Wraith make a definitive design statement.

Open the self-closing doors, and inside you'll find everything you expect from a Rolls-Royce, and then some. In its standard configuration, Rolls-Royce outfits the 4-passenger cabin with leather trim throughout, but owners can opt for a new wood treatment called Canadel paneling, which exposes the beauty of the wood grain and tilts it at a 55-degree angle in a chevron pattern, giving the doors and center consoles in the front and rear an elegant, sumptuous feel. On the dash, black chrome gauges have needles with blood orange tips, which the automaker claims is a nod to its aviation heritage. The seats and armrests come wrapped in high-grade natural grain leather, while rear-seat storage compartments for two iPads are among the convenience features. Wool carpets, rear courtesy reading lights, ambient lighting and an optional Starlight leather headliner, which uses 1,340 fiber-optic lights to mimic the night sky, help elevate the Wraith's cabin above just about anything else available on the market today.

The Wraith comes well-equipped with a wide range of tech features, including a voice-activated navigation system with real-time traffic and a 10.25-inch color display screen in the dash. Rolls-Royce also includes an 18-speaker, 1,300-watt tailor-made audio system with Bluetooth and a 20.5GB hard drive. Drivers can manage the vehicle's tech features using a Spirit of Ecstasy rotary controller and touchpad, located on the center console. The Wraith also creates its own wireless hot spot, so passengers can access the Internet using their personal devices while on the road.

The Wraith features a steel monocoque body, with the body shell and chassis melded together into a single unit. The benefits of this construction include a solid frame, a quiet ride and agile handling. The Wraith sits on a 122.5-inch wheelbase, with an overall length of 207.5 inches (for the record, that's more than 17 feet) and a height of 59.3 inches. Width checks in at 76.6 inches. For comparison purposes, the Wraith measures 0.86 inches wider than the Rolls-Royce Ghost sedan, while the wheelbase is 7.2 inches shorter. At the same time, the Wraith sits 1.97 inches lower than the Ghost, resulting in a lower center of gravity. A heavy car, the Wraith tips the scales at 5,203 pounds, so the V12 has its work cut out for it.

The Wraith claims the honor as the most powerful and fastest Rolls-Royce ever built. Its 6.6-liter twin-turbocharged V12 engine delivers an eye-popping 624 hp and 590 lb-ft of torque at 1,500 rpm. With all that power under the pedal, the Wraith rockets from 0-60 in just 4.4 seconds, despite its weight. Rolls-Royce limits the top speed to 155 mph. The V12 mates to an 8-speed ZF satellite-aided automatic transmission, which uses satellite-linked GPS to monitor the vehicle's location and anticipates the upcoming terrain when adjusting shift points and selecting the next gear. The system proves especially effective in hilly or mountainous areas, for example. Fuel economy numbers check in at 13 mpg city/29 highway. The engine requires super unleaded fuel.

The automaker tunes the suspension to minimize body roll and ensure a smooth ride. The suspension features a double-wishbone configuration in the front and a multilink rear suspension, with an air suspension system and electronic variable damping at all 4 corners. The dampers make adjustments every 2.5 milliseconds for optimal handling. Early test drivers say the Wraith, given its dimensions and weight, naturally feels like a large car, yet it's easy to maneuver, with a light steering feel. The suspension delivers a smooth ride, and some testers say the Wraith rides and handles better than the Ghost.

A number of features aid the Wraith's handling and ride, including dynamic stability control, dynamic traction control and dynamic brake control. Active cruise control comes standard, along with night vision technology, which alerts drivers to objects, animals or people ahead. An iBrake 6 system assists drivers during emergency stops, while an optional top-view camera gives drivers a 360-degree view around the vehicle.

Beyond the basics, Rolls-Royce offers a wide range of customization options for owners who want to create a unique one-of-a-kind vehicle, including upgraded seats, leather upholstery, veneers, wheels and exterior paint.

What's your take on the 2014 Rolls-Royce Wraith?

Have you driven a 2014 Rolls-Royce Wraith?
Rank This Car