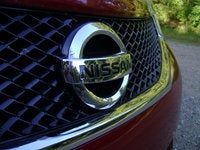 On the ride and handling front, the Versa Note proved itself to be ideally suited for city driving and daily commuting. 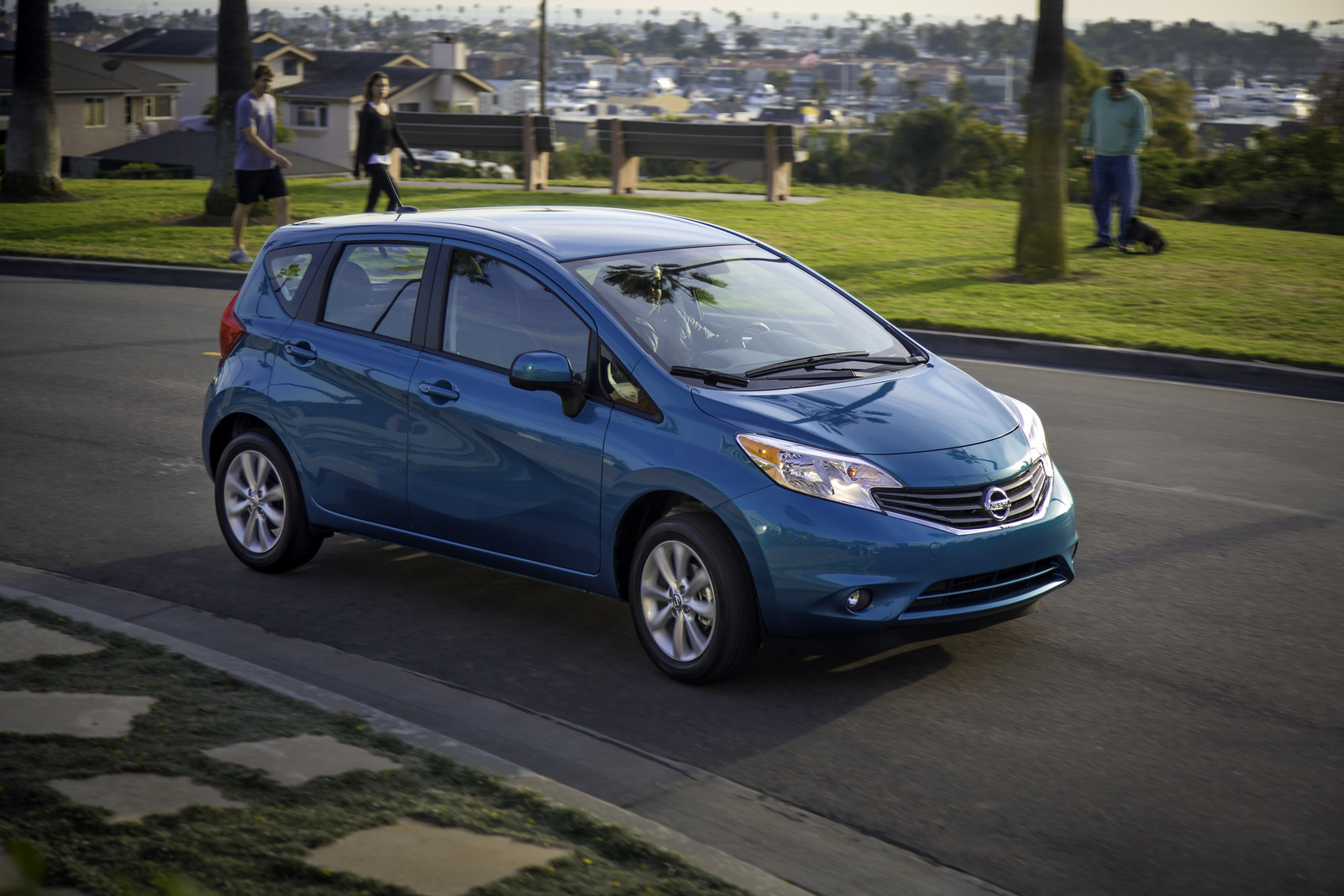 Fully redesigned for 2014, the Nissan Versa Note hatchback earns points for its affordability, attractive assortment of options and efficient operation and use of interior space. Complaints are few in number and small in significance. 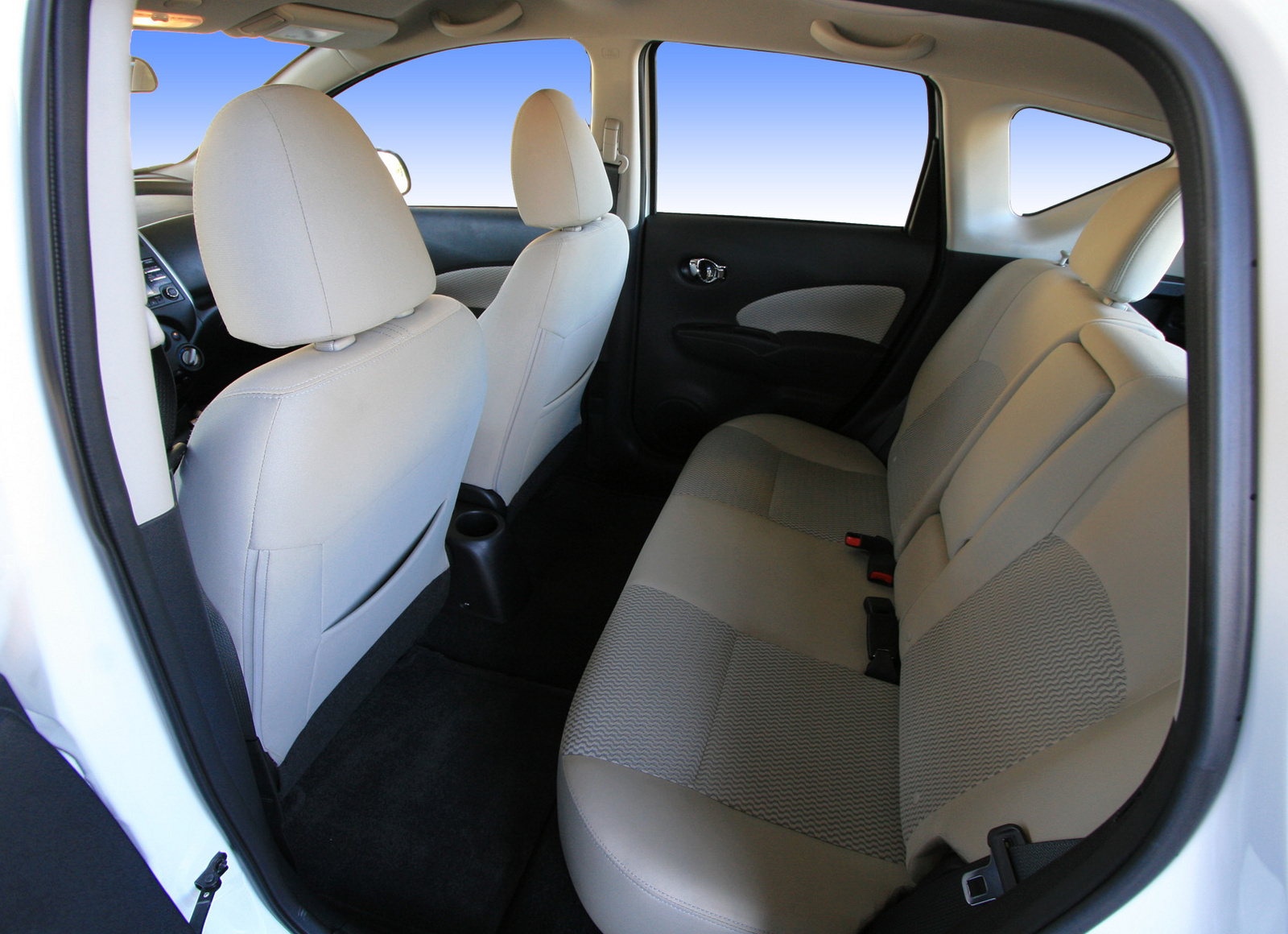 Nissan’s compact Versa Note replaces the previous Versa hatchback, which was discontinued after the 2012 model year. This new model is a couple hundred pounds lighter, features a less powerful yet significantly more efficient engine, offers a little less passenger room coupled with a small gain in cargo space, and, despite sporting the same 102.4-inch wheelbase, is 6 inches shorter. The Note also includes a suite of new features not available on its predecessor.

Buyers interested in the most affordable 2014 Versa Note will want to direct their attention to the S model, starting at $14,800 (all prices include an $810 destination charge) and fitted with a 5-speed manual gearbox, 15-inch steel wheels wrapped in low-rolling resistance tires, cloth upholstery, a 4-speaker sound system with a CD player and auxiliary input jack, and little else.

If that sounds like a good fit for you, but you’d rather not deal with shifting and a clutch pedal, the Versa Note S Plus might be a better choice. This variant, priced from $16,050, is equipped with a standard continuously variable transmission (CVT) as well as cruise control and active grille shutters that improve aerodynamics.

To gain access to a more robust selection of creature comforts, skip the S and S Plus and head straight for the Versa Note SV. In exchange for $16,800, you’ll get a leather-wrapped steering wheel with integrated audio controls, Bluetooth connectivity, power windows and door locks, keyless entry and vanity mirrors.

In addition to the S and SV trims, Nissan offers a few desirable options, including an SV Convenience Package comprised of a 4.3-inch audio display, satellite radio capability, a USB input with iPod compatibility, a rear-view camera and an adjustable cargo floor that allows items to be stored out of sight. Those amenities are included in the SL Package, too, along with 16-inch alloy wheels, fog lights, variable intermittent wipers, push-button ignition and the company’s Easy Fill Tire Alert system. Pulling out all the stops is the SL Technology Package, comprised of a 5.8-inch touchscreen navigation system with voice control, a Google Send-to-Car feature that enables users to transfer point-of-interest (POI) information and directions from their home computer or portable device, hands-free text messaging functionality and a 360-degree Around View Monitor that’s particularly helpful when attempting to parallel park.

For the bulk of this review, I’ll be focusing on a 2014 Versa Note SV I borrowed from Nissan during a work trip to Los Angeles. That car featured the SV Convenience Package and carried an as-tested price of $17,810. As luck would have it, I was also able to log a few miles in another Versa Note SV at home in northern New England, one equipped with the SL and SL Technology Packages, as well as floor mats and a cargo cover. All told, that well-appointed tester rang up at $19,565. 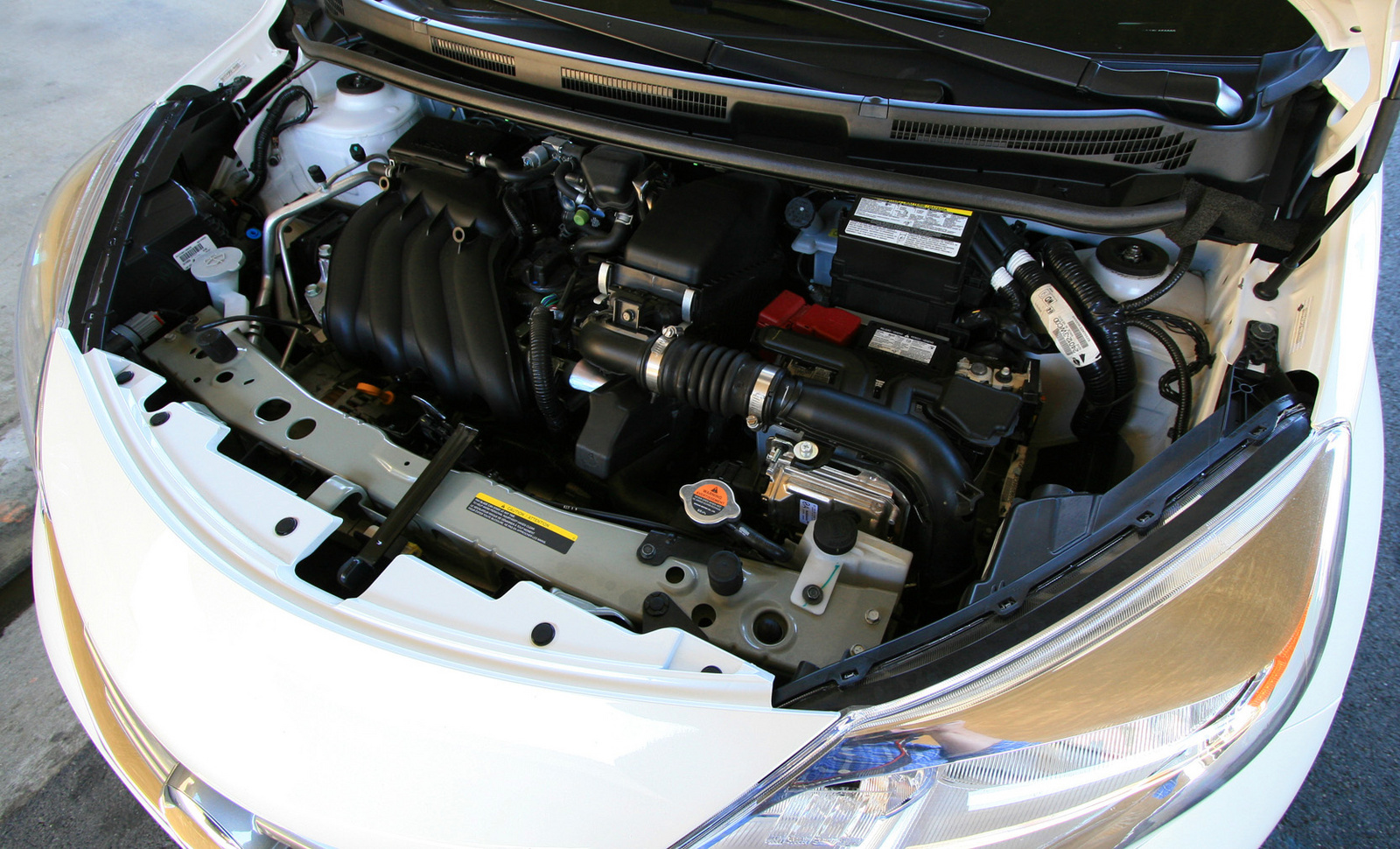 As part of the Versa Note’s redesign, the old 122-hp 1.8-liter engine was replaced by a 1.6-liter 4-cylinder that puts out 109 horses and 107 lb-ft of torque. EPA estimates for CVT-equipped models are 31 mpg city/40 highway/35 combined. With a solid mix of driving on freeways and suburban streets, I averaged 35.5 mpg.

Although relatively underpowered, the Note’s engine offered up enough muscle to make me feel sufficiently confident behind the wheel. Thankfully, the CVT offered more immediate and effective response than previous versions, so a good goosing of the throttle resulted in actual forward movement and not simply a spinning tachometer needle. Thus, I could merge into a passing lane without worry of becoming an unfortunate decorative touch on a Freightliner’s grille. Cruising at 70–80 mph wasn’t a problem either, though getting up to speed, and even up some steep hills, required a dedicated heavy right foot.

On the ride and handling front, the Versa Note proved itself to be ideally suited for city driving and daily commuting. Vague electric power steering didn’t exactly put me on the hunt for curvy back roads, and it required frequent corrections when I was traveling on the highway, but the light effort was welcome when traveling at low speeds in town or maneuvering into parking spots. A tight turning radius was an added bonus that allowed me to make frequent U-turns when navigating unfamiliar parts of Los Angeles. 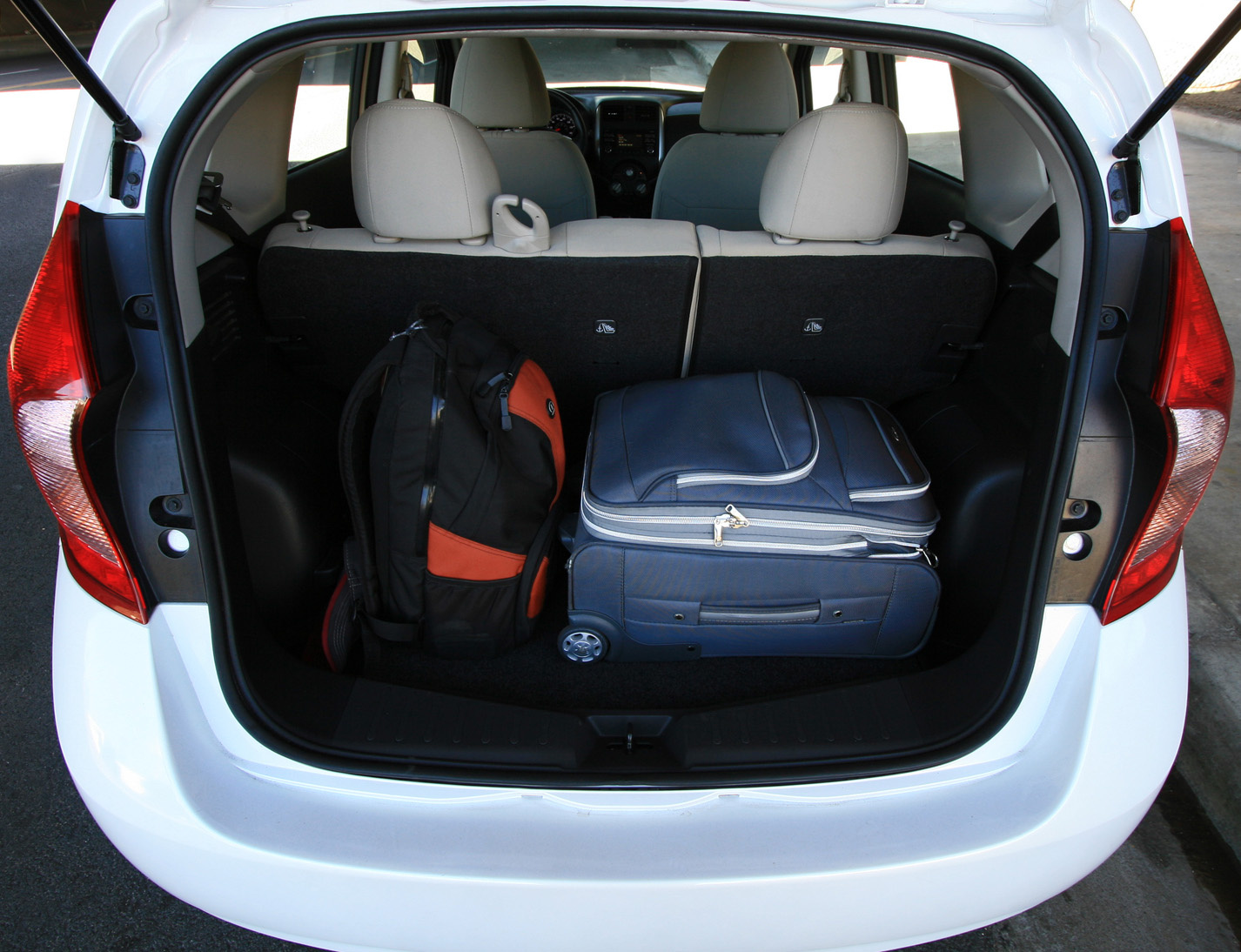 Admittedly, I didn’t have high expectations for the level of comfort I’d experience inside the 2014 Nissan Versa Note. This is, after all, an affordable compact car built with efficiency—and a particular price point—in mind. However, after a few hundred miles with the SV models, I was pleasantly surprised.

Up front, occupants are treated to an abundance of headroom and buckets with ample thigh support, a curved backrest and soft cushions. The driver gets a few added accommodations, including a tilt steering wheel (no telescoping function), a manual height adjustment for the seat and a padded fold-down center armrest. That last item is a must-have since the armrest on the door panel is decidedly hard, as are all the plastic surfaces inside the car.

Rear-seat passengers get similar accommodations, albeit with a little less thigh support. Contrary to what its exterior dimensions may suggest, the Versa Note provides generous second-row leg and foot room. Knee-friendly soft front seatbacks are another plus. The same can’t be said for the stiff and wholly unwelcoming center "hump" that makes this Nissan, technically, a 5-person ride.

Mixed into the interior were 8 cupholders and several storage cubbies, slots and compartments, including dual gloveboxes. Of course, there’s also a rear cargo area that can be expanded by folding the split seatbacks. The optional adjustable cargo floor works as intended by creating a concealed compartment, but the space it provides is limited and not suitable for anything large or bulky. 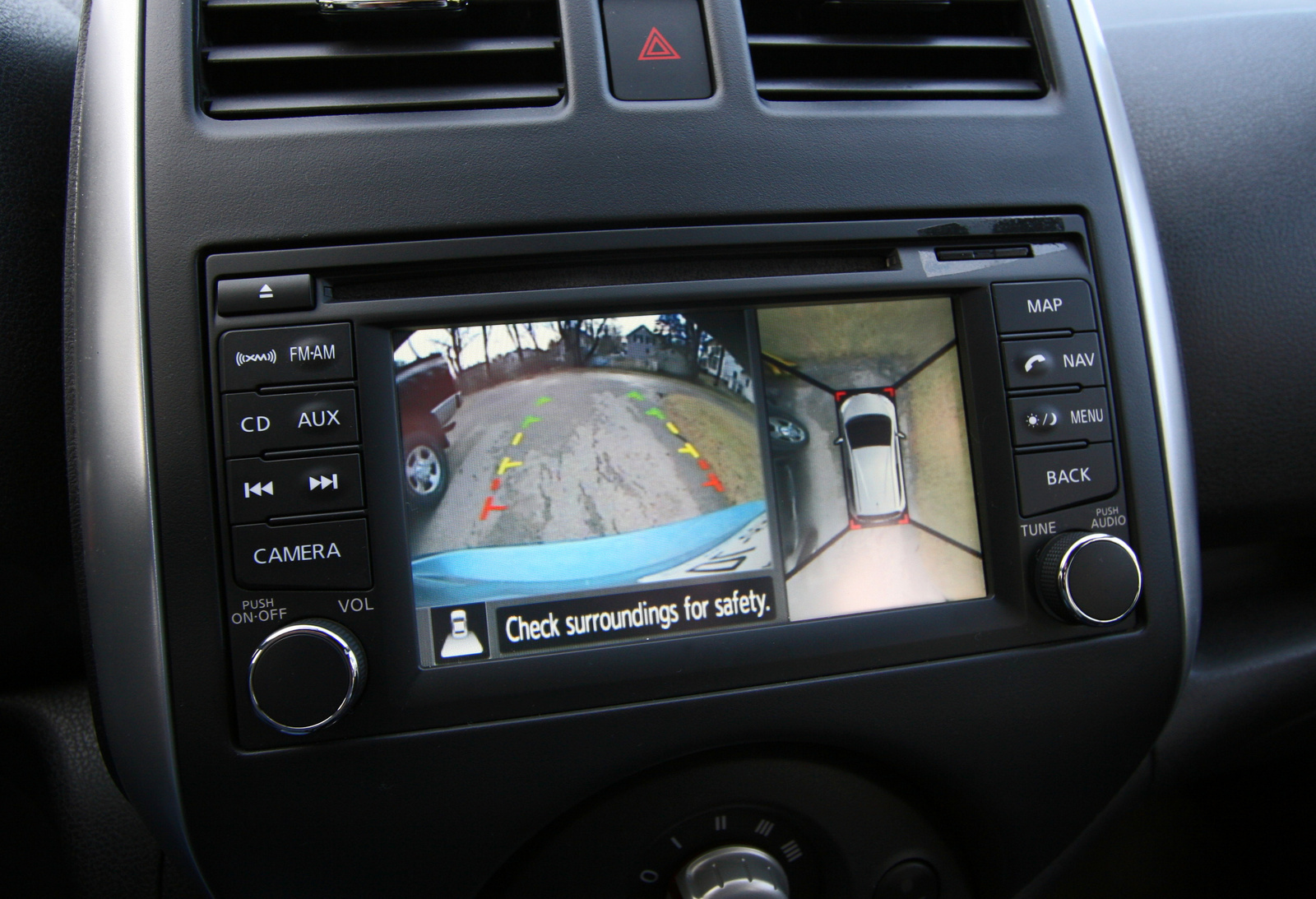 In the world of cars, a sub-$20,000 sticker price doesn’t typically go hand-in-hand with an impressive array of technology, though there are exceptions. Like, for instance, the 2014 Nissan Versa Note.

Among the highlights is an alert connected to the tire pressure monitor. When filling an underinflated tire, the hazard lights flash to signal the system is working; when the proper inflation has been reached, the horn beeps. It’s simple and allows drivers to ditch the cheap, often inaccurate gauges they may have rattling around in their gloveboxes. Plus, you won’t find this particular technology on the Versa Note’s competitors.

Bluetooth connectivity, on the other hand, is not a Note exclusive. Pairing a smartphone is a cinch; after what seemed like a matter of seconds, my iPhone was linked to the car, and I was good to go. I enjoyed clear reception, but the system’s inability to recognize my voice commands left me more than a little frustrated. When trying to call my Mom, I said “Call Mom” when prompted, to which the system responded “Call Dawn.” This happened several times, so I tried to do a better job of enunciating, and even emphasized the “m” a little more. Bluetooth responded with “Call Dave” and “Call Alan.” I started over, accessed a list of recent calls, found Mom listed as #3, said “3” at the prompt, and the call was made. She didn’t answer, but more importantly, the whole process distracted me from driving and could’ve been avoided with better voice recognition. 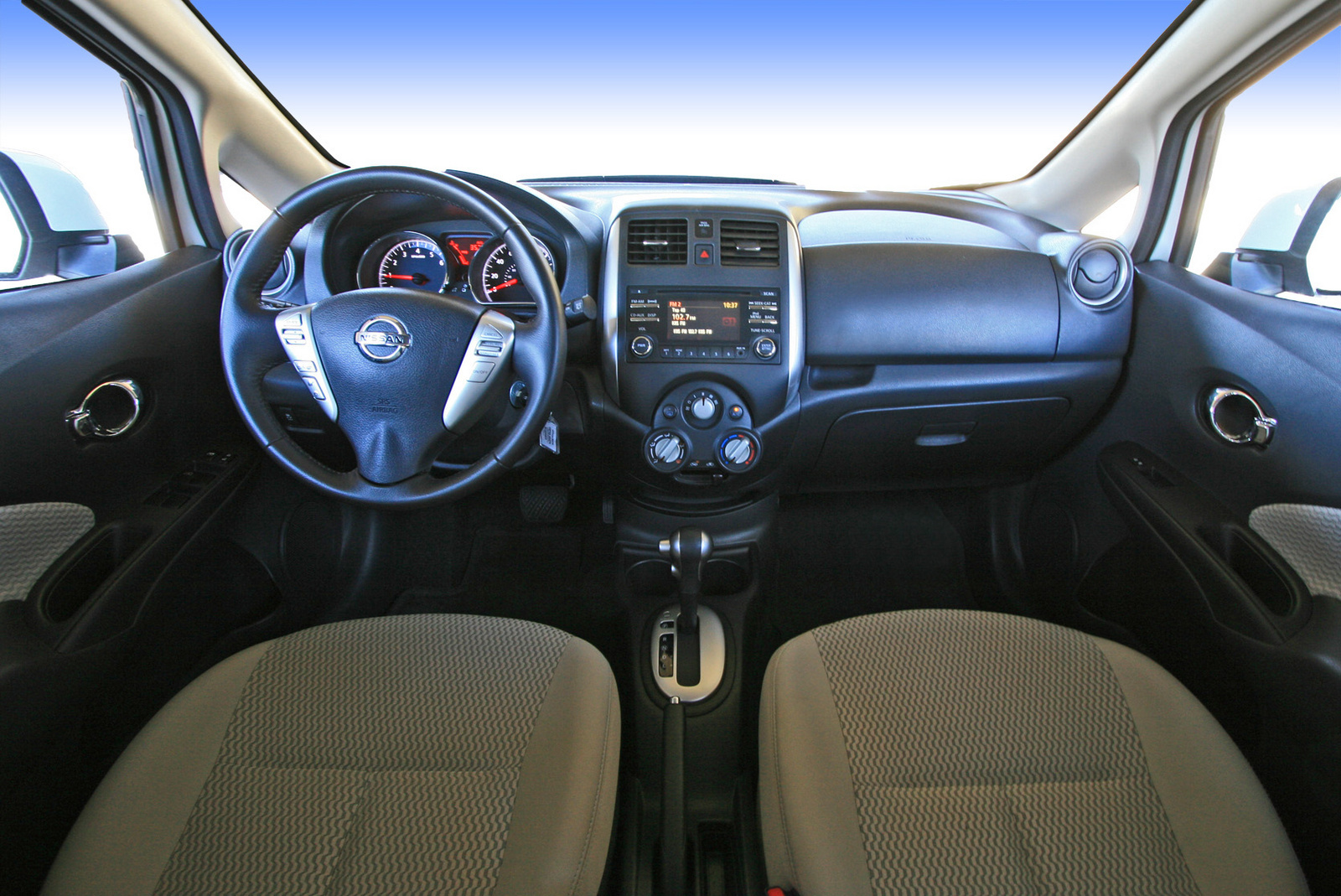 Nissan packs a decent amount of safety equipment into the compact Versa Note, including 6 airbags, antilock brakes with brake assist and electronic brakeforce distribution, and a stability control system. Unfortunately, disc brakes are fitted only to the front wheels. Nissan opted to go with less effective—and less expensive—drums in the rear.

That setup is fairly common for affordable models in this segment, and it didn’t prevent the Note from scoring an overall 4-out-of-5-star rating from the National Highway Traffic Safety Administration (NHTSA). Performance in side-impact crash tests earned 5 stars, and rollover protection netted 4 stars, but this Versa was awarded only 3 stars for its ability to protect passengers in a front-impact collision.

As this review is being written, the Insurance Institute for Highway Safety (IIHS) has not published its ratings for the 2014 Nissan Versa Note. 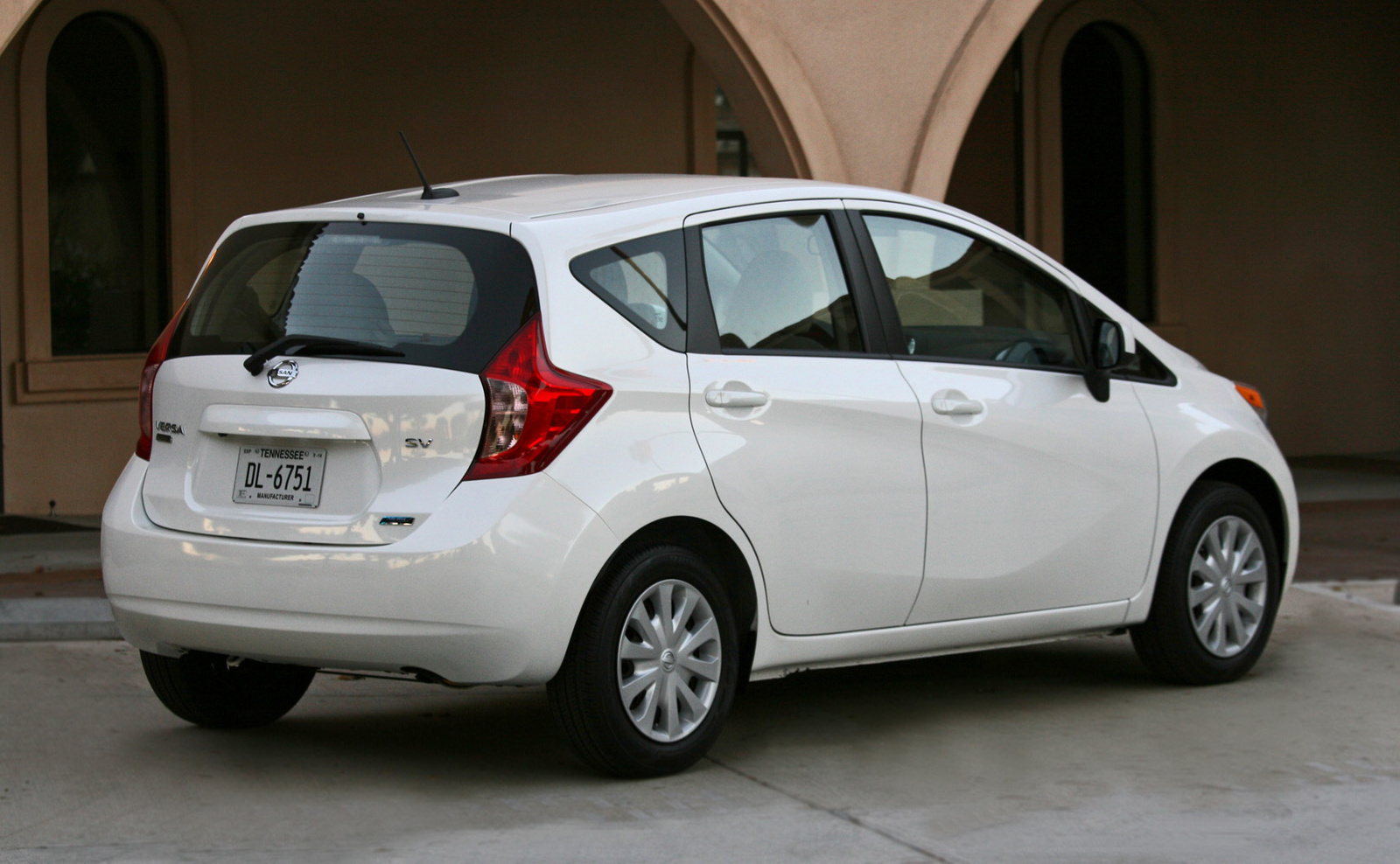 Since the cost of a car is about a lot more than what’s printed on a window sticker, I did a little digging to discover how well the 2014 Nissan Versa Note stacks up against some of its primary competitors—in this case, the Chevrolet Sonic hatchback, Ford Fiesta hatchback, and 5-door Toyota Yaris—in terms of fuel economy, reliability, resale value and more.

With a $14,800 base price, the Nissan is the cheapest of the bunch, yet it lacks features like the Sonic’s OnStar telematics system and the Yaris’s standard automatic transmission and Bluetooth connectivity. That being said, when a Versa Note can be loaded up with amenities like a navigation system and a 360-degree exterior camera for a tick under $20,000, it’s clear the car offers plenty of value.

Fuel efficiency is another area where the Nissan excels. According to EPA data, the CVT-equipped Versa Note is one of the most economical non-hybrid, non-electric small cars on the market (based on its combined rating of 35 mpg).

In terms of other ownership costs, Nissan does not offer a free-maintenance plan like Chevrolet and Toyota, and J.D. Power and Associates suggests drivers of the 2014 Versa Note will experience below-average reliability. Residual values were not available when this review was written, but if the Versa sedan is any indication, they should be competitive.

What's your take on the 2014 Nissan Versa Note?

Mark I have the base model. It has all I want: the control of a stick, a/c, and a surprisingly good-sounding stereo. My most recent trip to Phoenix from my home in Tucson gave me mileage figures of 40 mpg going 75 mph. I got the car as a model-year-end closeout. It sat because nobody wants a bare-bones car, but it was EXACTLY what I wanted, down to the crank windows. When your power windows fail in that unexpected gusher, I will roll down mine and look at you with concern. And, when your CVT fails and your stuck with a massive repair bill, I will drive up in my manual and give you comfort.

Have you driven a 2014 Nissan Versa Note?
Rank This Car

I'm not a dealer. I listed my car as a private seller on CarGurus, Facebook Marketplace and Craigslist. Unfortunately, I went to CG first since I have used this web site to purchase a couple of ve...

Are There EV Vehicles

Are EV vehicles available, and not SUV

I had a bad experience with a dealer I found with Car Gurus- I’d like to submit a bad review. How to I proceed?