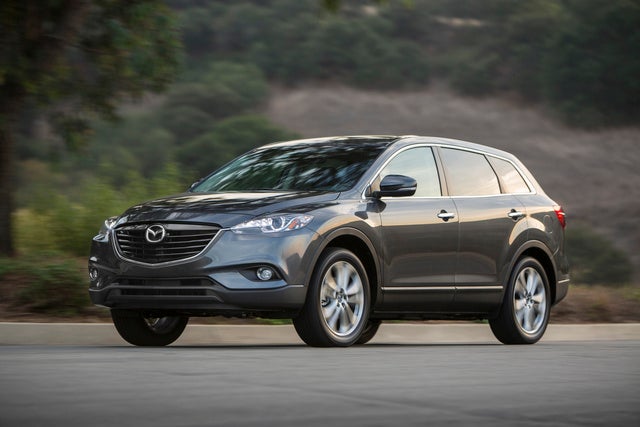 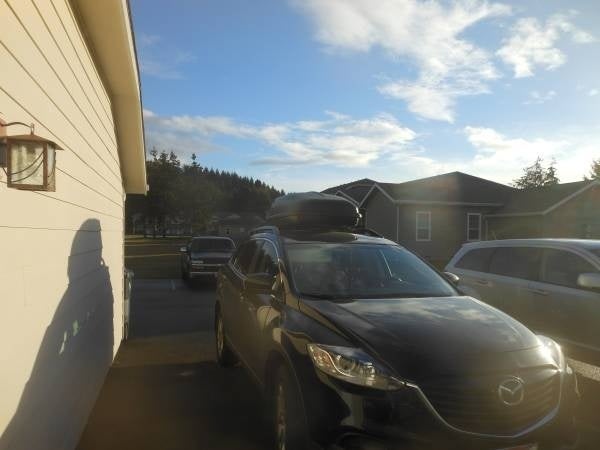 Perhaps a little too swoopy for some, the 2014 Mazda CX-9 large crossover nevertheless carries 7 folks comfortably in 3 rows of seating and sports a good number of standard creature comforts, especially in the higher trims. It also boasts available full-time all-wheel drive (AWD) that will amaze and delight with its surprising agility. Add to that some 100.7 cubic feet of cargo space with the rear seats folded, and you’ve got a capable, roomy and handsome commuter car, mall-hopper or long-haul tripper that won’t break the bank.

Designed to compete with the Ford Flex, Hyundai’s peppy Santa Fe and Chevy’s Traverse, the curvy CX-9 comes in 3 trims: the base Sport, the midlevel Touring and the flagship Grand Touring. Rear-wheel drive (RWD) is standard, but the optional AWD system allows some fancy cornering moves on dry pavement and remains ready to shift torque automatically from the wheels that slip to the wheels that grip on slippery roadways. Changes for this year, meantime, should include a few added exterior color choices, updated wheels and, in the Touring and Grand Touring trims, a standard rear cross-traffic alert.

Move on up to the midlevel Touring trim and look for such standard add-ons as leather upholstery, heated power-adjustable front seats, heated outside mirrors, rear parking sensors and a rear-view camera.

All trims are expected to remain eligible for such standalone options as remote engine start, chrome roof rails, satellite radio and Pandora radio connectivity. The Touring trim, furthermore, can be equipped with the optional Touring Technology Package, boasting a power sunroof, 10-speaker Bose premium audio, navigation and front fog/driving lights plus a few added features that come standard in the Grand Touring and are deleted from the similar GT Touring Package. However, unique to the Grand Touring is a rear-seat DVD entertainment system that throws in an upgraded Bose stereo boasting 11 premium Surround Sound speakers.

Coming to the heart of the matter, expect all 2014 CX-9 trims to once again be powered by a variable-valve-timed (VVT) 3.7-liter V6 engine that mates with the standard 6-speed shiftable automatic transmission for 273 hp and 270 lb-ft of torque. Towing, with a dealer-installed hitch and wiring, is maxed out at 2,000 pounds in this crafted crossover, while mileage is estimated once again at 17 mpg city/24 highway in RWD versions and 16/22 in AWD-equipped editions.

Users ranked 2014 Mazda CX-9 against other cars which they drove/owned. Each ranking was based on 9 categories. Here is the summary of top rankings.

What Type Of Battery Is Best

Why Would My Car Not Recognize My Fobs?

My blind spot monitor stopped working about a month ago. Now my car doesn't recognize either of my remotes....that issue got progressively worse until now they don't work at all.