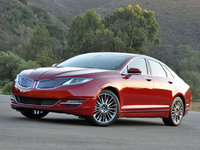 The Lincoln MKZ is the very definition of a mild-mannered clerk that transforms into a veritable superhero—as long as it’s properly equipped. 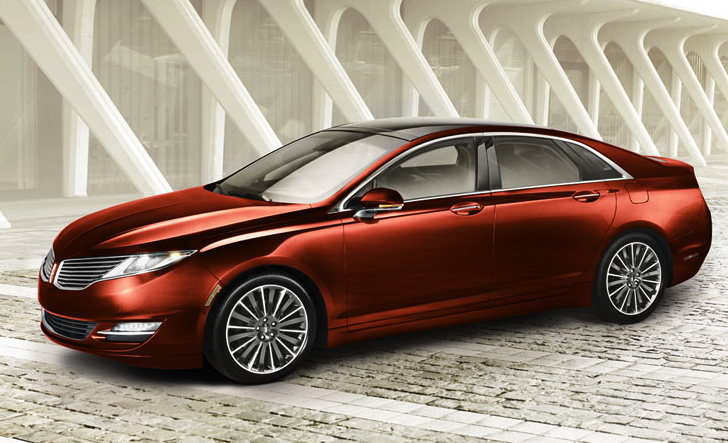 It’s been awhile since Lincoln made an impression with a sporty premium sedan. Although it can be a blast to drive, the MKZ’s many idiosyncrasies may make it difficult to make an impact in this highly competitive market. 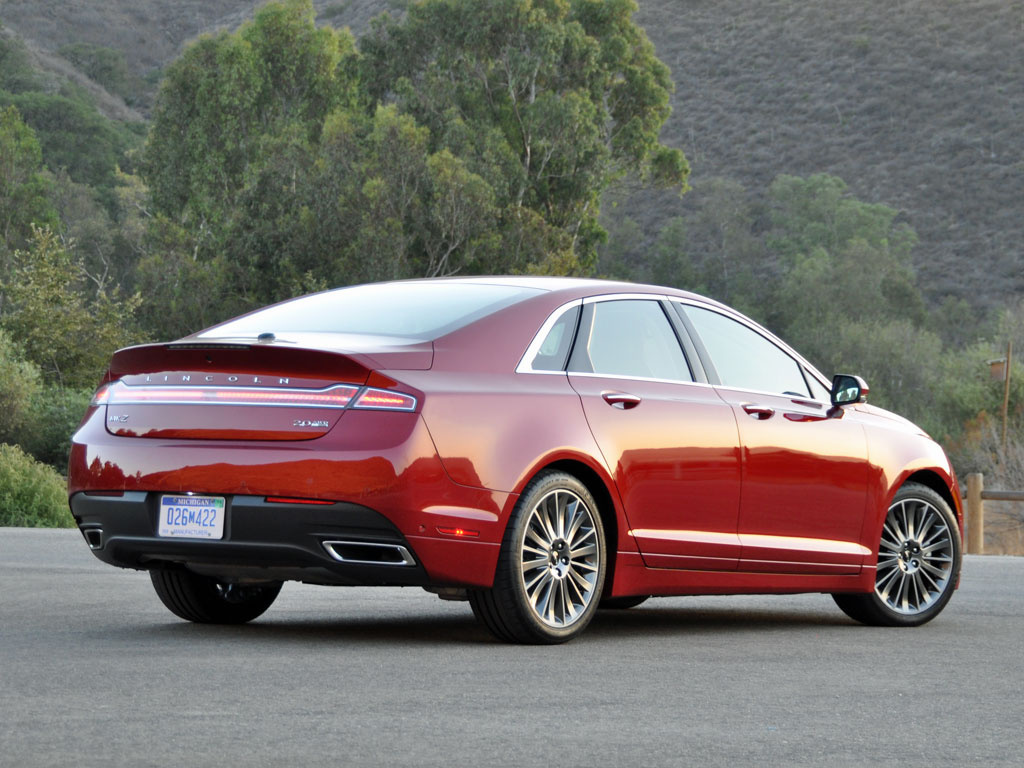 The year was 1999. Worries about the Y2K virus abounded. The eponymous Prince song was in full rotation on the radio. And 9/11 was just an iconic Porsche sports car. It was also the year that Lincoln threw an opening salvo in the entry-level luxury sedan wars with the introduction of the rear-wheel-drive LS sedan, an impressive combatant that established a degree of American authority in this hotly contested segment.

Alas, in the ensuing years, Lincoln failed to keep its new sedan competitive, and the LS died an ignominious death in 2006, replaced by the mediocre Zephyr, which no one remembers. The Zephyr did morph into the first MKZ, though, and while it ultimately became a decent car, it wasn’t hard to see the Ford Fusion behind the shiny grille, fancy wheels and full-width taillights.

With the latest MKZ, Lincoln seeks to reinvigorate its mojo. Although it remains based on the Ford Fusion, the MKZ is loaded with more equipment and presents a bold visage to lure you into a Lincoln showroom. As such, this car is all about styling, and about selecting a set of wheels that few other luxury car buyers choose to park in their own driveways. The front end looks like no other car, with a vaguely organic wing-shaped grille that tapers off into the headlights. Step inside and you’ll note the futuristic design and preponderance of touch-sensitive controls, making the unmistakable cost cutting that permeates the cabin doubly unfortunate.

So, given its roots and inexpensive interior detailing, it could be argued that the MKZ is not a genuine luxury sedan. Is it a sports sedan? No, not unless you equip it exactly like my Ruby Red test car.

Lincoln offers the MKZ in two flavors: MKZ and MKZ Hybrid. Standard equipment includes leather, dual-zone climate controls, 10-way power heated front seats and an 8-inch touchscreen display that controls most of the entertainment and information features, all riding on 18-inch wheels and an adaptive suspension. 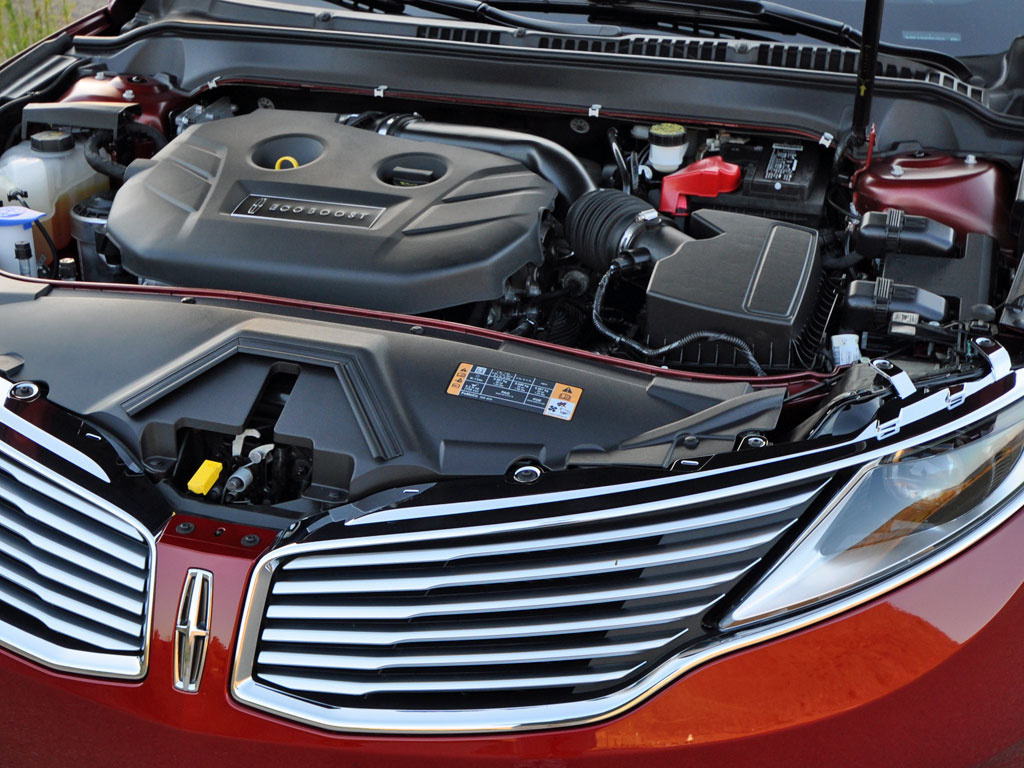 The MKZ is available with three different engines. Standard fare is a turbocharged 2.0-liter EcoBoost 4-cylinder engine that makes 231 hp on regular unleaded and 240 hp on premium. Next up is a 300-hp, 3.7-liter V6 engine. Eco-conscious shoppers might be interested in a gas-electric hybrid powertrain that should average 38 mpg. All are front-wheel drive, but all-wheel drive is available for the turbo and V6 powertrains.

My test vehicle was equipped with the EcoBoost 4-cylinder and all-wheel drive. Power proved plentiful during acceleration, and on the uphill portion of my test loop, turbo lag was almost nonexistent, and the excellent 6-speed automatic transmission made the most of the motive force.

At first, I was most unimpressed with the MKZ’s soft, wallowing suspension, fondly recalling the icily stiff underpinning of the old LS. Sure, the setup made for a comfortable ride around town, but I was dreading the handling part of my test loop, the car’s woozy lateral body movements instilling regret about my choice to eat before the test drive.

As it turned out, the Lincoln Drive Control system was in Comfort mode, which is appropriate primarily for Perry Como fans. The MKZ also offers a Normal mode, which adjusts the steering, transmission and suspension accordingly. Switch the system to Sport, and then choose the transmission’s Sport mode, and the Lincoln MKZ becomes the automotive equivalent of a mild-mannered clerk that transforms into a veritable superhero—as long as you’re properly equipped. The trick is to get that Summer Tire Handling Package and then prepare to suffer sore cheeks from all the grinning you’ll be doing while driving this car.

So equipped and programmed, the MKZ becomes far more responsive and athletic, eager to be tossed into tight hairpin curve after curve. The steering is more precise, the transmission holds gears longer for more aggressive sprints, the summer performance tires grip the road tight, and the brakes prove fade-free, allowing this rather hefty Lincoln to blast down the sinuous roads of the Santa Monica Mountains with ease.

By the time I reached the beach, my longing for the Lincoln LS of a bygone era gave way to a favorable impression of the modern MKZ. 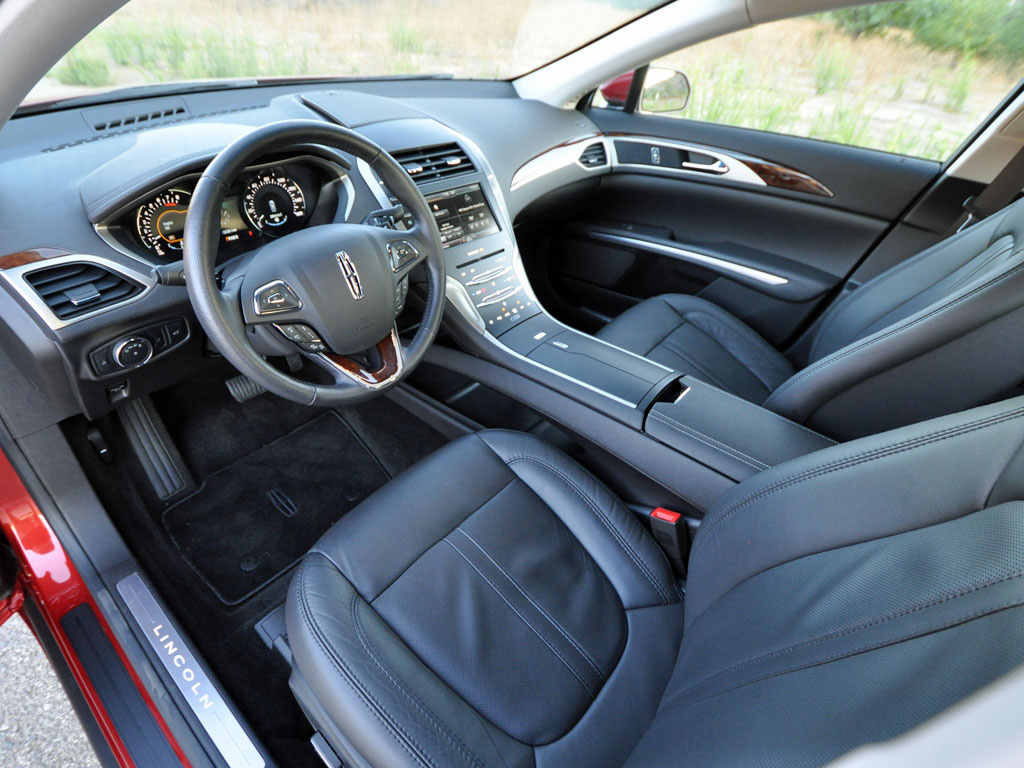 The Lincoln MKZ’s front seats are a comfortable place to be, once you’ve ducked into the cabin and avoided whacking your noggin on the rakish roofline. Plush yet supportive, the driver’s seat offers 10-way power controls and a tilt-telescoping steering wheel to achieve a proper driving position.

Look around the cabin, and you’ll find that the MKZ displays design flair and a high-zoot factor, especially in the better-equipped models. Still, a strong whiff of Ford Fusion remains, one underscored by the relatively low quality of the materials and rather haphazard attention to detail.

Controls for the car are mostly easy to use, once you get used to them, which begs the question: Why should one need to get used to them? The MyLincoln Touch interface and its idiosyncrasies have caused plenty of heartburn, and the MKZ is no exception.

Additionally, I take issue with transmission shifting. Rather than employ a traditional stalk shifter, or even the rotary dial that some high-end cars have been sporting, Lincoln uses a rather loosely engaged set of buttons next to the center stack display and under the Start/Stop button. Sure, it’s a different approach, but is it better? For me the act of shifting gears should be a deliberate act, and buttons minimize the action, potentially making it easier to hit an inappropriate button like Reverse rather than Neutral, or to forget to put the car in Park. Fortunately, the car will do that for you automatically when you forget, but you discover this only by trial and error.

Although the MKZ is priced to compete against smaller entry-level luxury sedans, it’s actually a midsize car, which means there’s a decent amount of space inside the cabin. The trunk is nice and roomy as well, with 15.6 cubic feet of space. However, I was dismayed to find that there is no way to open the trunk—no touchpad or latch release—without using the button on the dashboard or on the key fob, negating the whole point of having a passive keyless entry system in the first place. 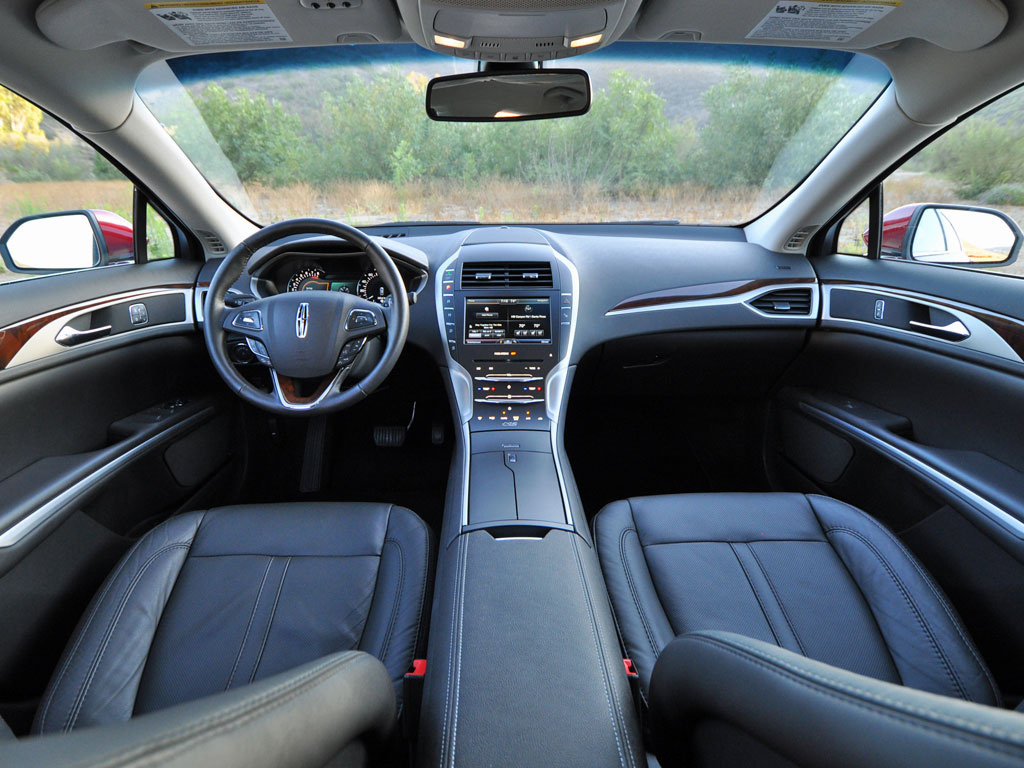 Getting used to the MKZ’s touch-sensing control interface takes a bit of time, but it’s easy to use once you’re acclimated. It also takes a bit of patience because of frequently delayed response to input and occasional system pauses in the system. At a minimum, I’d like to swap the touch-sensitive stereo volume and tuning controls for old-fashioned rotary knobs.

My test car also had Active Park Assist technology that automatically steers the MKZ into a parallel parking space; you just have to work the pedals. It’s a useful tool for those who are spatially challenged and should extend the life of your aluminum wheels by helping you to avoid curbs. 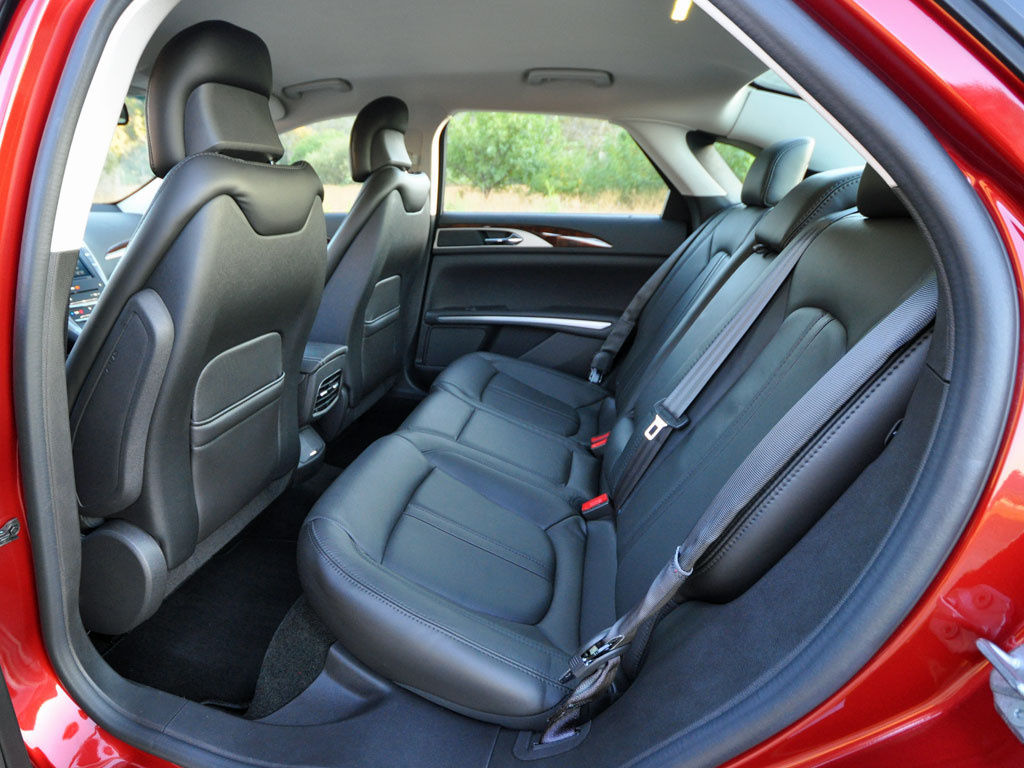 Lincoln provides a comprehensive and abundant list of safety features for the MKZ, as long as you’re willing to pay for them. For instance, a reversing camera is available, but it requires upgrading to the Select trim package. Seriously?

Once you’ve chosen the Select trim package, you also get rear parking-assist sensors. But for a blind-spot monitoring, rear cross-traffic alert, lane-departure warning and forward-collision warning system with active braking, you’re expected to pay for the Reserve trim package at a minimum. Lincoln also offers rear seatbelts with inflatable cushioning airbags as an option for the MKZ, but only if you’ve got the Select trim package or higher.

As far as crash protection is concerned, the Insurance Institute for Highway Safety (IIHS) rates the MKZ as a Top Safety Pick+ model, while the National Highway Traffic Safety Administration (NHTSA) gives the MKZ an overall rating of 5 stars. Do note, though, that side-impact protection for the driver rates just 3 stars. 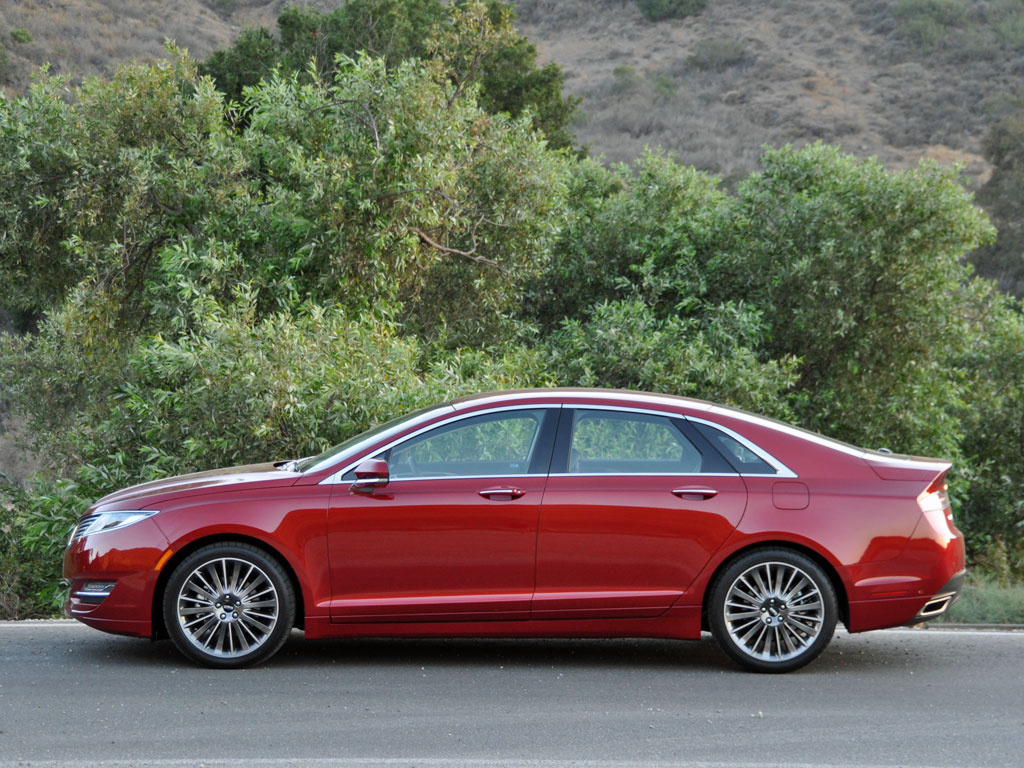 Based on what the experts think, owning a Lincoln MKZ is an expensive proposition, which might be one reason the deals are so appealing. As I write this review at the end of the summer of 2014, you can lease a decently equipped MKZ for around $400 a month, you can finance the car using a zero-interest rate loan for 60 months, or you can stick a $2,000 rebate in your pocket. Not only is the MKZ a good deal, but also J.D. Power says it should prove more reliable than your average luxury car.

Does this offset concern related to the cost of ownership? You can be the judge. Consumer Reports says the MKZ will be more expensive to own than other luxury cars, and ALG predicts that the MKZ will depreciate at a faster rate than competing models.

Also, don’t forget that the MKZ’s EcoBoost engine needs premium gas to make maximum power. Based on EPA ratings, my MKZ EcoBoost AWD test car should have returned about 22 mpg in the city, 31 mpg on the highway, and 25 mpg in mixed driving. I averaged 20.1 mpg over the course of a week, a disappointing showing.

Terry I love my new MKZ, bought in mid-April. The most technologically advanced car I have ever owned. It is so comfortable and tight to drive. You can use voice control to do almost anything from changing the AC temperature to selecting radio stations. I highly recommend this "new age "Lincoln.

mcdonoe Hi Liz - A correction to your writeup, there is a touch pad to open the trunk.. It's hidden in the rear license plate alcove, right next to the plate lamps.

Bob Just purchased one on Saturday 7/11/15 and the wife and I really like it so far. Has almost all the toys and we have most of them figured out. The adaptive cruise is really cool. Davis-Moore Lincoln in Wichita, Kansas, thank you!

Users ranked 2014 Lincoln MKZ against other cars which they drove/owned. Each ranking was based on 9 categories. Here is the summary of top rankings.

Have you driven a 2014 Lincoln MKZ?
Rank This Car

The air conditioner doesn't work until I get above 50mph

When i turn sharp my park assist,hill assist, and traction control and motion head lamp dashboard lights come on and i lose power steering. Then a bar appears and starts filling up for each of the ...

Why Is My Listing Of My Lincoln MKZ Showing An Accident?

Why is my listing of my 2014 Lincoln MKZ showing an accident? I have owned this vehicle since it had 20,000 miles on it- and have never had an accident. This may affect it's ability to sell....and I ...

Why Is My Car Listing Showing An Accident Report?

Why is my Lincoln MKZ showing an accident report? Rich Gross "Imrichgross@yahoo.com"

Lincoln 2014 MKZ won't start. All the lights work, radio, anti-theft, etc. When I push the start button, it's a single click, and then nothing. More notably, the radio does this weird flickering thi...