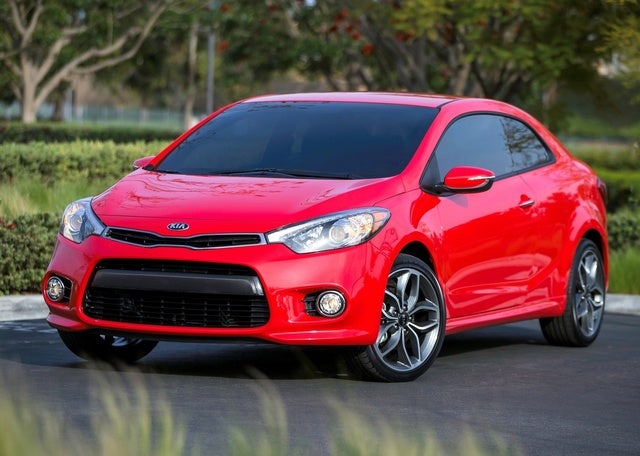 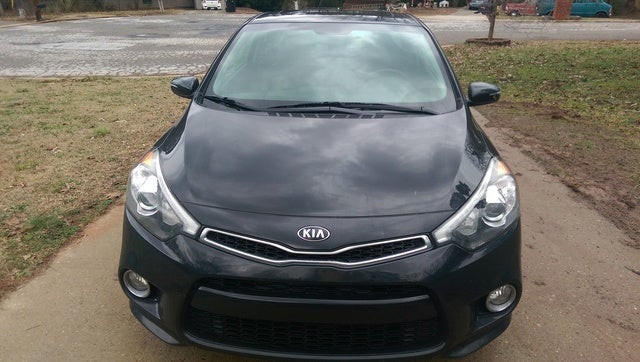 Five years into its production cycle, the sport-oriented Kia Forte Koup gets a second-generation makeover for 2014, which includes a new chassis, more aggressive exterior styling, upgraded engines and a number of new standard features. Based on the Kia Forte sedan and Forte 5-Door hatchback, the Koup remains the sportiest of the three, and pushes the performance envelope for 2014, thanks to its new turbocharged 4-cylinder engine, which generates 201 hp. That makes the 2014 Koup the most powerful Forte available to date, according to the automaker.

Kia again offers the 2-door Koup in EX and SX trim levels, each equipped with a different engine and displaying unique updated styling. The automaker's studio in Irvine, Calif., created the Koup's new Euro-inspired look, borrowed in part from the Forte 5-Door. Design highlights include a new front end, a steeply raked windshield, a low sloping roofline, minimal body creases and short overhangs. The front fascia features a thin black grille with a bowtie-like shape framed by large projection-style headlights, which stretch around the sides of the vehicle, ending just above the front wheel wells. The wide-mouthed lower air intake opening and front foglights add to the Koup's aggressive look. The EX comes equipped with front foglights, LED positioning lights and heated power-folding side mirrors, while the SX adds a sport front fascia with a larger bumper, a larger grille opening and carbon-fiber-style black accents, as well as integrated turn signals and LED taillights. Owners can add HID headlights as an option on both trims.

Two different engines power the front-wheel-drive Forte Koup trims. The upper-level sport-oriented SX gets the new 1.6-liter GDI turbocharged 4-cylinder engine, which replaces the previous year's 173-hp 2.4-liter 4-cylinder. The new powerplant increases hp to 201 and torque to 195 lb-ft, up from 168. The turbo engine, which features direct injection and dual continuously variable valve timing, links to either a 6-speed manual transmission, which comes standard in the SX, or an optional 6-speed automatic with a Sportmatic manual-shift mode and steering-wheel-mounted paddle shifters. The automatic also includes an EcoMinder fuel efficiency monitor. The EPA has not yet released fuel economy numbers for the new engine.

The entry-level EX also receives a boost in power, thanks to its 2.0-liter GDI 4-cylinder powerplant, which produces 173 hp and 154 lb-ft of torque, up from 156 and 144, respectively. In the EX, the 6-speed automatic transmission comes standard, although it does not include paddle shifters. Again, fuel economy numbers are not yet available for the upgraded base engine.

The 2014 Forte Koup offers an improved ride and more interior space than its predecessor, thanks to a new platform, which measures 1.2 inches longer, 0.6 inches lower and 0.2 inches wider than the previous generation's chassis. The wheelbase stretches to 102.3 inches, up 2 inches from the previous year, and overall length increases to 178.3 inches, up from 176.4. Both trims ride on a sport-tuned suspension with MacPherson struts and coil springs in the front, and a torsion beam rear design. Electric power steering comes standard on both, with a FlexSteer driver-selectable steering-assist system available as an option. Ventilated front and solid rear disc brakes are standard on both trims, although the SX gets larger front brakes. The EX rides on 16-inch alloy wheels, while the SX upgrades to 18-inch alloy wheels.

Inside, the Forte Koup seats 4 passengers comfortably, although 3 can squeeze into the back seat if necessary. As in most compact vehicles, legroom remains tight for taller passengers in the back seat, but those in the front should find adequate space. The seats are well-bolstered for sporty driving maneuvers, and the driver's seat sits high, providing good visibility out the front. The white-on-black gauges are easy to read, and the controls are well laid out and simple to use. Cloth upholstery comes standard on both trims, with manual seat adjustment. The SX adds carbon fiber-style accents on the front and rear seats for a sportier look. Options for both trims include leather upholstery, a 10-way power-adjustable driver's seat with memory, heated front and rear seats, and a ventilated driver's seat.

Reviewers and owners generally liked the design and layout of the previous generation's cabin, and the same quality materials and good overall fit and finish carry forward to the new generation. Both trims come equipped with a strong list of standard features, including a leather-wrapped steering wheel and shift knob, remote keyless entry, air conditioning, a tilt/telescopic steering column and a 6-speaker audio system with SiriusXM radio, a CD/MP3 player, USB/auxiliary input ports and steering-wheel-mounted audio controls. Kia also includes its UVO eServices connectivity package with a 4.3-inch touchscreen, a rear-view camera and Bluetooth. It integrates with the audio, climate control and other onboard systems. An optional navigation package adds a larger 8-inch touchscreen and HD radio.

The SX also receives metal pedals as a standard feature, while options for both trims include a sunroof, a heated steering wheel, push-button start, dual-zone automatic climate control and an auto-dimming rear-view mirror. A 60/40-split folding rear seatback adds flexibility to the Koup's interior. Cargo capacity in the trunk checks in at 13.3 cubic feet.

Six airbags, including side curtain airbags, come standard on both trims, along with such additional safety features as electronic stability control, traction control and 4-wheel antilock brakes with electronic brakeforce distribution and brake assist. A hill-start assist control feature also comes standard. While the 2014 Forte Koup has not yet been safety-tested, the previous year's Forte was named a Top Safety Pick by the IIHS.

The Forte Koup runs in a competitive class and battles against such all-stars as the Honda Civic Si, which also delivers 201 hp from its 4-cylinder engine. Other competitors include the Hyundai Veloster and Elantra Coupe, the MINI Cooper Coupe and the new 200-hp Subaru BRZ.

Have you driven a 2014 Kia Forte Koup?
Rank This Car