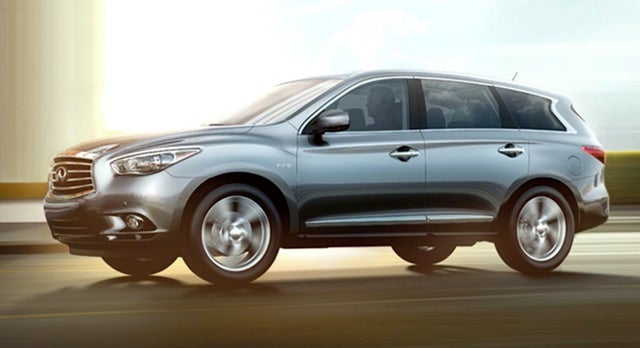 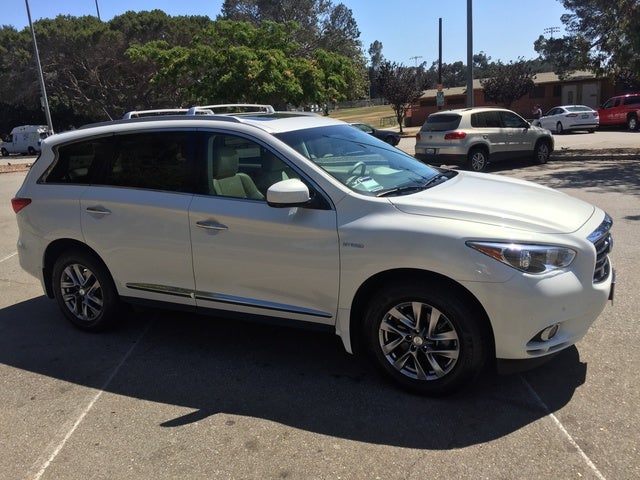 Taking Infiniti’s 2014 re-naming of its JX35 midsize luxury crossover a step further, the brand new Infiniti QX60 Hybrid makes its debut this year alongside its re-titled gasoline-burning QX60 sibling. Expect, however, no downgrade in amenities, performance or passenger and cargo room in this introductory gas/electric people hauler, whose updated moniker is thought by some to be a bit more aesthetic, if not particularly enlightening, except, perhaps, to hard-nosed brand loyalists.

In any case, the traditional 3 rows of seating for 7 passengers and 76.5 cubic feet of cargo area with the rear seatbacks folded are framed by a handsome melding of sheet metal, and power is provided by way of a supercharged 4-cylinder hybrid powerplant that comes under the auspices of the standard continuously variable transmission (CVT).

Expected to be available in a single Base trim, this brand new midsize mini-ute should carry all the posh appointments of its non-hybrid sibling, while adding LED taillights and a dashboard-mounted, hybrid-dedicated information screen that will monitor performance and efficiency numbers in the gas-electric drivetrain. Additionally, look for this green-leaning crossover to come in standard front-wheel-drive configuration (FWD), while Nissan’s intuitive all-wheel drive (iAWD) is advertised as an available option.

Options for the 2014 QX60 Hybrid, meantime, are likewise expected to mirror its conventionally powered sibling, with stuff like available upgraded 20-inch wheels, heated and cooled front seats, heated rear seats, an upgraded 15-speaker Bose audio system and a hard-drive-based navigation suite with 7-inch touchscreen information display. Alas, most of these options are expected to be available only in package form, a fact that doesn’t sit well among many reviewers.

Power for the natty new QX60 Hybrid is touted to be the same supercharged 2.5-liter inline 4-cylinder (I4) engine that graces the debuting 2014 Pathfinder Hybrid. Mating with a 15-kilowatt electric motor and managed by a well-wrought continuously variable transmission (CVT), look for this fuel-efficient and green-leaning combination to put out a total of 250 hp and 243 lb-ft of torque. Regenerative braking is slated to help keep the slim and lightweight Lithium-ion battery charged, while auto stop-start technology, combined with variable valve timing (VVT), is expected to provide mileage figures that are claimed by the automaker to be some 24 percent better than those in the non-hybrid version. Furthermore, look for a maximum of 3,500 pounds of towing capacity from the properly equipped FWD version of this luxury-laden crossover.

This high-end hybrid’s AWD system, meantime, is, like that in its Pathfinder stablemates, touted to come with a 3-mode (2WD, 4WD and Auto) driver-selectable feature that can lock in efficient cruising in FWD under normal conditions (2WD), allow for dedicated 4-wheel drive in snow or mud (4WD) or, in Auto mode, simply let this touted system automatically transfer torque from the wheels that slip to the wheels that grip in changeable road conditions.

Have you driven a 2014 INFINITI QX60 Hybrid?
Rank This Car