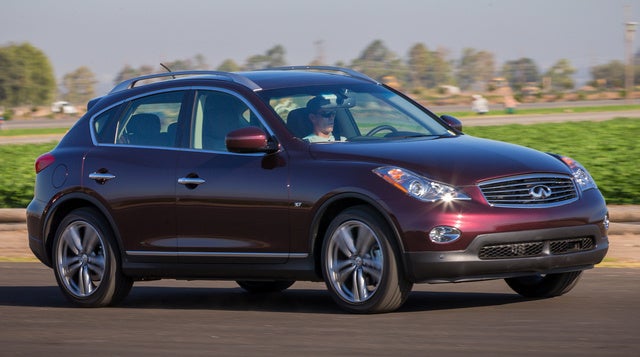 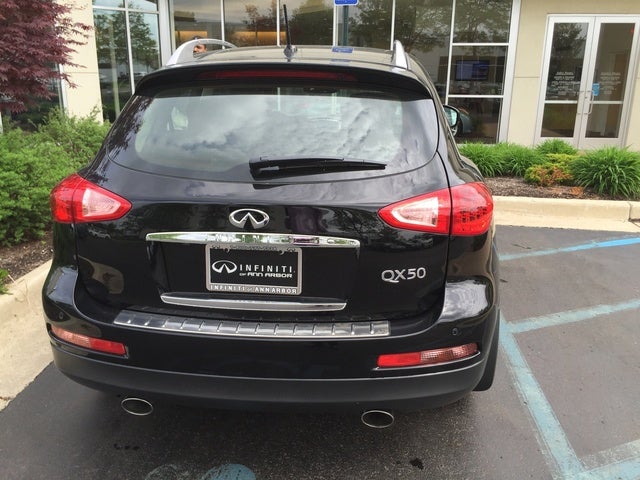 Only the name, for the most part, has been changed for Infiniti’s popular and touted compact crossover.

The automaker’s offering in the niche now goes by the moniker QX50 as part of Infiniti’s across-the-board renaming and rebadging of its lineup. As with the EX37 or just plain EX label it went with previously, the 2014 Infiniti QX50 comes up a little short when measured against others in the class in terms of its space for back-seat passengers and cargo.

But the 2014 Infiniti QX50 also continues to easily overcome that and any other shortcomings, and its positives in style, performance and numerous other attributes far outweigh any drawbacks, the experts feel. Reviewers rave about how the crossover drives and how it rides, about its classy lines on the outside and about its stylish luxury once the doors open to an elegant interior.

The 2014 Infiniti QX50, they say, has much going for it on several fronts when stacked against rivals such as the Mercedes-Benz GLK350, the Audi Q5, the BMW X3, the Acura RDX and the Volvo XC60.

A 3.7-liter V6, good for 325 hp and 267 lb-ft of torque, gives the 2014 Infiniti QX50 plenty of punch. It teams with a smooth and effective 7-speed automatic transmission that can be shifted manually and also draws praise from the experts. The crossover is agile and responsive on the road and drives like a high-end car, specifically like the Q50 sedan on which it’s based, many feel.

The crossover comes in Base and Journey trims, and each is available with rear-wheel drive (RWD) or all-wheel drive (AWD). Estimated fuel mileage numbers check in at 17 mpg city/25 highway with RWD and 17/24 with AWD.

The Base version starts at a little over $35,000 and comes with leather seats, an 8-way power driver’s seat, dual-zone automatic climate control and a rear-view monitor. The AWD version gets heated front seats. The Journey has heated front seats and also a moonroof and Bluetooth connectivity.

A few different option packages, featuring several high-tech items, are available for the Journey. A Technology Package includes Infiniti’s Intelligent Cruise Control, which adjusts the cruise control setting to account for what is going on around the car, and a lane-departure system that notes an unintentional lane change. A Premium Package features a 360-degree Around View Monitor that aids parking and a premium 11-speaker Bose sound system and navigation. A Deluxe Touring Package includes driver’s seat lumbar support, a power folding rear seat and an 8-way power passenger seat.

One advance that comes standard on the 2014 Infiniti QX50 is Nissan’s fluid finish paint technology, a system that features an elastic resin that allows the car to basically heal minor scratches on its own. The idea is that marks go away within hours or days of being damaged as the resin flows back into shape.

Besides the crossover’s relatively small interior space, some reviewers raise issues with its overall visibility and also note there can be a fair amount of engine noise. Again, though, they generally are more than willing to put up with a limited number of shortcomings in light of the 2014 Infiniti QX50’s comfort and handling and the rest of its long list of pluses.

The 2014 Infiniti QX50 comes standard with 4-wheel antilock brakes, a full range of airbags and electronic traction and stability control. A variety of other safety features, including the lane-departure warning system and Intelligent Cruise Control, are available as well.

Johnny Very good write-up, first time I actually learned about the fluid finish paint technology and how effective it is. Overall, Infiniti has done a good job with their lineup especially for the QX50 which many believe should've been redesign for 2014 with the name change but I think that they will redesign it in the next 2 years. Check out our blog on the 2014 Infiniti QX50: http://www.douglasinfiniti.com/2014/03/24/2014-infiniti-qx50-summit-nj-ready-taking

Can I Sell My Car On Car Gurus