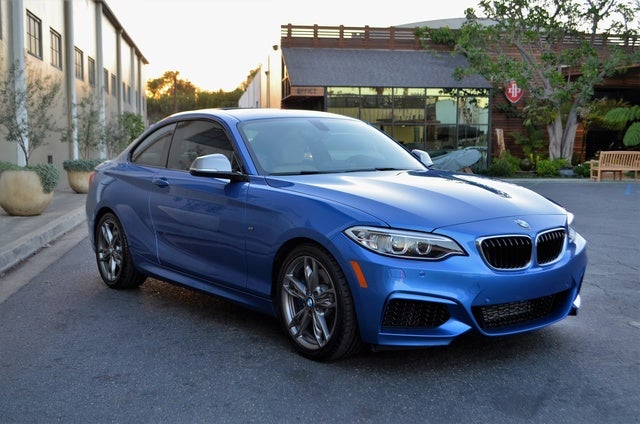 New for 2014, the BMW 2 Series compact sport coupe borrows a number of features, like its interior design, from the outgoing BMW 1 Series, which it replaces in the automaker's lineup. However, the new 2 Series coupe also receives a wide range of new features to distinguish it from its predecessor, including a sportier front grille with forward-slanting kidney slats, a longer hood, frameless windows and a low sloping roofline, which descends to a narrow rear deck. The 2 Series also comes equipped with a choice of two turbocharged engines, rear-wheel drive and an upgraded chassis with a sport-tuned suspension and driver-configurable ride settings. In creating the 2 Series, the German automaker has taken aim at such competitors as the Audi A3 compact sport sedan and the popular Mercedes-Benz CLA-Class 4-door sport coupes, and right out of the gate the new 2 Series should be a strong contender in the compact sport sedan category.

Introduced at the 2014 North American International Auto Show, the 2 Series takes its name and some styling cues from the 2-door BMW 2002 sport coupes of the 1960s and '70s, but features all of BMW's latest technologies and mechanics. It sits on a larger footprint than the 1 Series, adding 2.8 inches to its length (175.4 inches bumper to bumper), 1.3 inches to its wheelbase (105.9 inches) and 1.3 inches to its width (69.8 inches). This results in more interior space, including an additional 0.7 inches for front headroom and 0.8 in additional rear legroom. Cargo space in the trunk also increases by 0.7 cubic feet when compared to the 1 Series, to 13.8 cubic feet. Outside, the 2 Series also has a lower coefficient of drag of just 0.29, which helps improve its efficiency and fuel economy.

The 2 Series comes in two flavors for the North American market. The 228i gets a 2.0-liter twin-turbocharged 4-cylinder borrowed from the 328i sedan. Featuring variable valve timing, high-precision direct injection and an auto start/stop function, it delivers 240 hp and 258 lb-ft of torque over a broad range from 1,250 to 4,500 rpm, ensuring smooth acceleration. Paired with an 8-speed sport automatic transmission, which includes steering-wheel-mounted paddle shifters, or an available 6-speed manual transmission, the turbo engine drives the 228i from 0-60 in 5.4 seconds and to a top speed of 130 mph. Fuel-economy numbers check in at a very respectable 23 mpg city/35 highway with the automatic transmission, thanks in part to the auto start/stop feature, which shuts off the engine when idling to conserve fuel. The numbers drop slightly to 22/34 with the 6-speed manual.

BMW also offers the 2 Series in a sport-oriented M235i version, powered by an M Performance twin-turbocharged 6-cylinder engine, also with variable valve timing, direct injection and the auto start/stop function. It pumps out 315 hp and 332 lb-ft of torque at 1,300 to 4,500 rpm. That's good enough to drive the M235i from 0-60 in 4.8 seconds with the 8-speed automatic transmission and to a top speed of 155 mph. Again, BMW also offers the 6-speed manual transmission as an option. The bigger engine posts still-respectable fuel economy numbers of 22/32 mpg with the automatic transmission and 19/28 with the manual.

Both trims come equipped with BMW's Driving Dynamics Control system, which gives drivers the ability to choose between Eco Pro, Comfort, Sport and Sport+ performance settings. The settings adjust the cars suspension, transmission, steering feedback and engine settings to provide a more efficient, more comfortable or firmer ride, depending on the selection. The use of aluminum in many suspension components, including the subframe, front lower arms and steering rack, as well as in the braking system helps to keep weight down, and at 3,300 pounds with the automatic transmission, the 2 Series isn't excessively heavy, which ensures good agility and handling. Servotronic power-assisted steering comes standard on both trims, while the M235i gets M-specific chassis tuning with an M Adaptive suspension, an M Sport Braking system and a specially tuned exhaust system.

Like all BMWs, the 2 Series has a driver-focused cabin, with a central console angled toward the driver and a layered effect on the dash designed to put all controls and buttons within easy reach. As with all BMWs, the cabin features high-quality materials and good overall fit and finish. SensaTec upholstery, a 3-spoke leather-wrapped multifunction sport steering wheel and silver matte trim provides a sporty feel. The front seats feature 8-way manual adjustment, while the rear seatback splits 60/40 and folds down. An Easy Entry function for the front seats makes it easy to passengers to enter and exit the two rear seats.

Tech features include BMW's iDrive system with a 6.5-inch touchscreen and 8 programmable memory buttons, as well as an audio system with HD radio and Bluetooth. Satellite radio does not come standard, but can be added as an option. Other standard features include push-button start, automatic climate control and keyless entry. Options include Dakota leather upholstery and a navigation system, as well as brushed aluminum or wood interior trim. An available Sport Line package for the 228i trim adds such features as special seat upholstery, a choice of wood or brushed aluminum trim, ambient lighting and 18-inch light-alloy wheels.

The 1 Series received high marks from reviewers for its dynamic performance and handling, as well as for its agile handling, smooth-shifting transmissions and responsive steering, and many of those characteristics should apply to the 2 Series. Even though it's an entry-level vehicle, the 2 Series should retain the best characteristics of its larger 3 and 5 Series stablemates, as the 1 Series did, especially with its rear-wheel-drive configuration and its turbocharged engines. Testers did note a small amount of turbo lag in the 1 Series engines, which also might apply to the 2 Series. However, the 2 Series features more interior space and more cargo space, which puts it a step above the vehicle it's replacing.

gc00p I haven't seen any reviews of the 2 series evaluate the electronic power steering yet. Ditto for the M3 and 4 series. Has BMW improved it, or are reviewers just tired of complaining about how it doesn't measure up to the old hydraulic power steering?

Users ranked 2014 BMW 2 Series against other cars which they drove/owned. Each ranking was based on 9 categories. Here is the summary of top rankings.

I listed my car yesterday including many pictures. It is not showing up when I search for it.

I know this sounds impracticle... and highly stupid.... but im really yearning for a manual transmisison again. I got the car 2 years ago with the 8-speed, thinking it be better for my commute in ca...