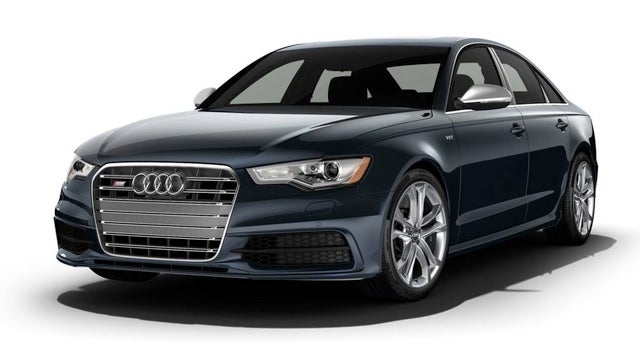 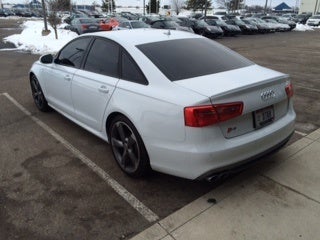 When it comes to performance, handling and luxury, as well as overall efficiency, the Audi S6 sports sedan packs a lot of punch. Although it changes little for 2014, receiving only a few minor updates, the S6 still comes equipped with a cutting-edge twin-turbocharged V8 engine, which drives the sedan from 0-60 in just 4.5 seconds. At the same time, the S6 displays classic lines outside and offers a tech-laden, feature-rich cabin that's highly rated by reviewers and owners alike. Add in a performance-oriented transmission, Audi's quattro all-wheel-drive (AWD) system and such standard interior features as leather upholstery, a navigation system and a 14-speaker Bose premium audio system, and it's easy to see why the S6 remains at or near the top of its competitive class, which includes such 4-door rockets as the BMW M5 and the Mercedes-Benz E63 AMG, both powered by similar twin-turbo V8s.

Leather trim on the doors and center console becomes a new standard feature for the 2014 S6, while new interior options include layered aluminum and black interior wood inlays, as well as an optional Alcantara headliner. To dress up the already attractive exterior design, Audi offers a new Black Optic appearance package, which includes a Black Optic high-gloss grille, glossy black exterior trim around the windows and 20-inch wheels with a titanium finish. In addition, the automaker adds a top-view camera to the optional Driver Assistance Plus package for 2014.

Audi leaves the S6's 4.0-liter FSI V8 engine unchanged for 2014, but that's not a bad thing. In 2011, Audi equipped the S6 with an unwieldy 5.2-liter V10 borrowed from Lamborghini (both are owned by the Volkswagen Group, as are Bentley and Porsche). However, rising fuel-economy standards caused the automaker the ditch the V10, and after taking a year off from production, the S6 reappeared in Audi's lineup in 2013 with a new twin-turbocharged V8 engine under the hood. It's the same engine used in the S8 sedan and S7 coupe, as well as in the Bentley Continental GT V8.

The twin-turbo V8 features a compact footprint and a reconfigured airflow designed to improve efficiency and fuel economy. For use in the S6, Audi tunes the V8 to deliver 420 hp and 406 lb-ft of torque at 1,400-5,200 rpm. The automaker pairs the V8 with a 7-speed S tronic dual-clutch automatic transmission, making for a unique combination in Audi's lineup. The V8, which requires premium fuel, manages relatively decent fuel-economy numbers of 17 mpg city/27 highway, thanks in part to cylinder-on-demand technology, which deactivates 4 cylinders at lower speeds or when idling to reduce fuel consumption. Top speed for the S6 is limited to 155 mph.

When it comes to performance, the S6 doesn't quite match its competitors, despite its quick leap off the mark. The bi-turbo V8 in the E63 AMG, for instance, generates 525 hp, while the M5's V8 tops out at 560 hp. Both come equipped with similar 7-speed automatic transmissions and post 0-60 times of 3.6 seconds and 4.4 seconds, respectively. Of course, fuel-economy numbers suffer for both powerplants, with the E63 AMG getting 15/23 and the M5 topping out at 20 mpg. By comparison, the S6 provides a good balance of power and fuel economy. Owners seeking more power, as well as a heftier price tag, can opt for the S8, which pumps out 520 hp from the same V8, due to engine tweaking.

While it might not match its competitors on the track, the S6 trumps them not just in fuel economy but also in the quality of its cabin. In fact, the S6's interior remains one of its biggest assets. Audi has developed a reputation for its quiet, high-end cabins, and that certainly applies to the 5-passenger S6. Quality materials, soft-touch surfaces, decorative inlays and good overall fit and finish put the S6 a step ahead of the pack. The long list of standard features includes Valcona leather seats with a diamond-stitched pattern and 12-way heated power front sport seats with driver's-side memory. The 3-spoke multifunction sport steering wheel includes paddle shifters for easy manual shifting, as well as a power tilt/telescopic column with memory. A wraparound dashboard, power sunroof, 4-zone automatic climate control, Bluetooth and Audi's advanced key system are among the other standard features on the S6.

The tech features continues outside. While some reviewers say the S6's exterior doesn't do enough to distinguish itself from the A6, upon which it's based, the S6 does display a few unique features, such as quad exhaust outlets, a sportier platinum-gray Singleframe grille and standard S-design 19-inch wheels. However, both the S6 and the upper-end A6 Prestige trim come equipped with such standard exterior features as HID headlights, LED daytime running lights, heated windshield-wiper nozzles, auto-dimming heated power side mirrors, LED taillights and rear foglights. In addition, both receive a similar S exterior package with unique fascias, side sills and a rear spoiler. The new Black Optic package dresses up the exterior with glossy black trim and larger wheels.

Under the skin, there are some differences between the S6 and the A6 as well. The S6 rides on an S-specific air suspension with a 5-link configuration and a stabilizer bar in the front, a trapezoidal-link rear setup and a rear sport differential, which works with the quattro AWD system. S6 sport calibration improves nimbleness and reduces body roll, while Audi's Drive Select system allows drivers to adjust the firmness of the ride by choosing from Comfort, Dynamic, Auto and Individual settings. An electromechanical power steering system provides good precision and responsiveness, and large 15.7-inch front brakes and 14-inch rear brakes with S6 badging provide plenty of stopping power.

Safety features abound in the S6, which comes equipped with 8 airbags, including knee and thorax side airbags. A new Side Assist system monitors blind spots and alerts drivers of approaching vehicles, while a Pre Sense system helps reduce damage in rear-end collisions by closing windows and the sunroof, and tightening safety belts. Electronic stability control, traction control and antilock brakes with electronic brakeforce distribution and brake assist are among the other standard safety features. An optional Driver Assistance Plus package adds such features as adaptive cruise control and a new top-view camera.

Users ranked 2014 Audi S6 against other cars which they drove/owned. Each ranking was based on 9 categories. Here is the summary of top rankings.