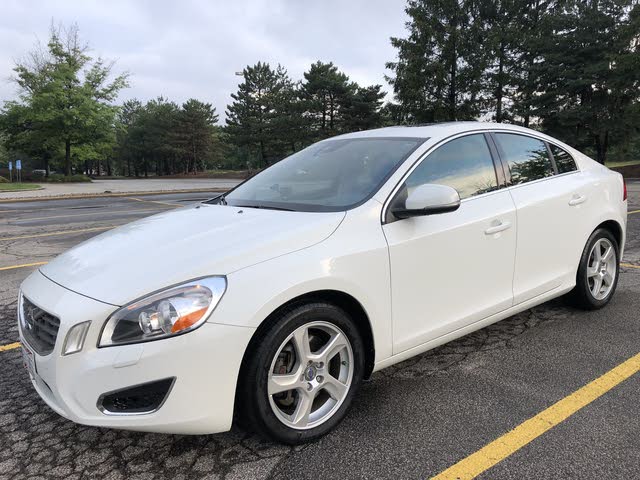 Average user score
4.4 ⁄ 5 stars
Based on 7 reviews
Solid Swede by Dori — Car can do everything well. Predictable steering and brakes at speeds from city traffic to 114 MPH (drove it in Germany). Acceleration is linear and controlled, unlike my experience with the G35 Inf... Read more
Review by Jason — Very nice car. Great look. Features are awesome. Turbocharged is always a plus. Read more
Review by GuruF33BW — Great car overall. Started drinking a lot of oil and front end problems. 206K uber car though. Read more

Three years after a redesign, Volvo's compact S60 sedan is still such a stunner it only gains the same headlight washers and rain-sensing windshield wipers all other Volvos get standard for 2013, and 2 newly available options—heated rear seats for any trim and all-wheel drive (AWD) for the base T5. Most complaints are fairly typical of the compact class, including a tight back seat for legroom and a less-than-roomy 12-cubic-foot trunk made even less roomy by an optional spare tire, with only an inflation kit standard. Drivers nevertheless adore this Swede machine's balance of performance, looks, quality and value, despite the S60's few unique quirks.

Those few quirks amount to Volvo's generally lackluster technology, primarily in the navigation department, where drivers would like to update their system without running the car for several hours or at least have the ability to link it up to their cell phone for more tried-and-true functionality. The lack of OnStar-like functionality also has some drivers concerned, but none of these issues resulted in anything more than a half-star taken off the highest possible review rating. Indeed, in spite of Volvo's consistency at being a few generations behind the competition on gimmicky tech, Volvo somehow keeps winning return drivers.

Could Volvo's strong driver return have something to do with "fun to drive" being the most common driver statement out of the gate, right next to "most comfortable ride and seats" with a "solid feel" and good economy on even regular fuel? No longer the boxy beast only a safety nut could love, the S60 is making a name for itself among corporate types and driving enthusiasts alike since the 2011 re-debut, and that name is "coveted." Sure, it's not the rally-bound machine of BMW's 3 Series, nor is it a showy and floaty Lexus or any cheap attempt at imitation. The S60 is, however, a responsively and comfortably tuned touring compact with plenty of gas-sipping punch and well-weighted agility for spirited urban driving, not to mention a long reputation for bulletproof safety—a combination that is simply irresistible to the practical driver, even if you don't account for the interesting high-quality interior.

The base T5 boasts 21 mpg city/30 highway economy, with its 2.5-liter turbocharged inline 5-cylinder capable of propelling the S60 to 60 mph in 6.4 seconds in its default front-wheel drive (FWD) form, the newly optional AWD system knocking that time down just 0.2 seconds for a slightly worse 20/29 economy still keeping it ahead of the class curve. The AWD T6 ticks that performance up a notch for 5.9 seconds to 60 mph with its turbocharged 3-liter inline-6, but fuel economy takes a hit to 18/25. Both use the same 6-speed automatic without any other transmission option, but drivers note the efficiency estimates are true to reality without significant turbo or transmission lag.

The R Design variants offer an additional 25 hp and 29 lb-ft of turbo torque with 3.5-inch twin exhaust pipes for an almost operatic experience. They're not especially faster than the T6, offering 60 mph in 5.5 seconds, but they do boast suspension components up to 400% stiffer for a significantly sportier ride. Pedal-to-pavement response is also quickened over the T6 thanks to compression and return in the same monotube valve. They gain a brakes upgrade and a new Platinum upgrade package above and beyond the rest of the lineup's gains for 2013.

Either trim can also upgrade to the Premier Plus and Platinum trim levels, since they, too, are essentially just options like the Climate pack, Technology pack, and standalone options such as a blind-spot warning system, heated rear seats and rear-seat dual DVD system. What few options are exclusive to any trim are exclusive only to the high-performance R-Design, leaving a wide-open world of possibilities for a car just as easy to own as it is to buy.

Users ranked 2013 Volvo S60 against other cars which they drove/owned. Each ranking was based on 9 categories. Here is the summary of top rankings.

2013 S60 with 80k miles. Check Engine light on. Dealer pulled piston and head gasket, but Engine Light back on after 1000 miles. Dealer suspects oil restriction in block from foreign material. Ever...

What are the reasons and solutions?

I have a 2014 S60. The check engine light was on so my mechanic reset it and it has stayed off. However, I lost the display for the odometer and the trip display. How do I get those back?

209 views with 3 answers (last answer about a year ago)