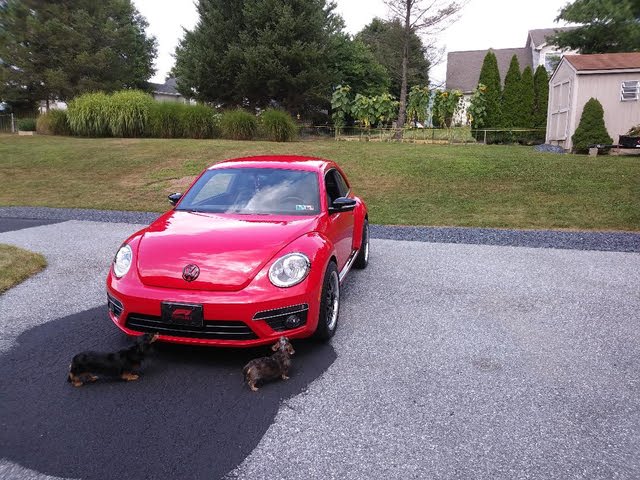 No longer just a plaything for the trendy and nostalgic, the new Beetle continues into its second year beating its own drum without the "New," but with a new convertible body style added to the lineup for 2013. Yes, this is the not-quite-Porsche-looking thing you got a rare glimpse of this past year—it's not a mirage or a trick of the light, this latest incarnation of the Beetle is longer and sportier than before. To mark the occasion of its second year, a special edition Fender version is also available with a Fender stereo, unique styling, bi-xenon headlights, LED running lights and 18-inch aluminum-alloy wheels—but there's just one small problem threatening to crash VW's party altogether.

Drivers are generally exceptionally pleased with their 2012 Beetle, but also universally bring up what can only be called a design defect, given the frequency of complaints. Sometimes lots of reviews can be a bad thing, and the Beetle has a few hundred scattered around the Internet, all complaining about windows that don't go up and stay up when they should—without exception. Absolutely every review mentions this, whether the car has been owned a few days or nearly a year, and worse yet, Volkswagen has no repairs to offer, and some drivers mention the windows exploding at high speeds. This does not bode well for an otherwise brilliantly designed genuine new addition to the compact class, but we can hope it was just a hurried first batch (the 2012 was a relatively early arrival in May 2011) with the 2013 in perfect working order. Do check with your dealer and then double-check with Volkswagen if you simply must have one now.

That said, drivers also take some issue with the engine selection. Though a distinctly sporting TDI turbodiesel is rumored to launch for the States any year now, the present lineup lacks refinement and zest, being built off the Golf's platform with the Golf's engines and the Golf's turbo setup, but a few hundred extra pounds to tote around. Basically it's a VW Golf made to look like a Porsche that somehow manages to be a good compromise of neither.

Instead of being comparably economical for a compact, the base 2.5-liter inline 5-cylinder powering all so-named 2.5 models gets 22 mpg city/31 highway at best with the 5-speed manual or 22/29 with the 6-speed automatic. Instead of performance, as the economy would suggest, that engine musters only 170 hp and 177 lb-ft of torque for an on-par 8.8 seconds to 60 mph. The 2.0T models get a turbocharged 2-liter inline-4 good for 200 hp and 207 lb-ft of torque, shaving 0.8 seconds off the 2011 edition for a zip-to-60 in 6.3 seconds, and fuel economy actually improves to 22/30, whether you choose the 6-speed stick or 6-speed DSG automated manual. The turbo definitely gets you closer to compact par, but the MINI Cooper offers 5 mpg more without as much turbo lag reported by 2012 Beetle drivers.

On the upside, the base Beetle, 2.5L and 2.0T are all available in PZEV-compliant forms for no additional charge, and the interior is more ergonomically designed than many competitors with user-friendly gauges and buttons. Much as the Beetle has its downsides, it is still very much worth a test at least to see all the improvements to interior storage, rear legroom, overall headroom, outward visibility, materials and use of space in its latest incarnation. Though no official figures exist for the convertible editions just yet, it's pretty safe to expect slightly worse fuel economy and performance for the added heft of reinforcement for the frame to let the top down.

What's your take on the 2013 Volkswagen Beetle?

TheHorror It's cynicism, manifest as an automobile!

thatsmyride My 2013 VW beetle turbo with a 2.0TSI engine seems to jerk slightly when accelerating from 1st gear, something doesn't seem right to me , the dealer says its normal..??????

Users ranked 2013 Volkswagen Beetle against other cars which they drove/owned. Each ranking was based on 9 categories. Here is the summary of top rankings.

Have you driven a 2013 Volkswagen Beetle?
Rank This Car

I have a 2013 VW Beetle Convertible. The top works fine, but the warning light turns on stating that the top is open, even when closed. The motor continues to purr, even after the roof opens or clos...

I Have An Issue: I Don't Have Any My Cars Button! Please Help!

Good morning, I've put online my advertisement to sell my car yesterday, and I can't edit my listing since. I have paid (and even got debited already) for my listing, but I have no button, no link...

What Are Your Shipping Rates?

If a car is 500 miles away can it be arranged to be shipped to me, and if so at what additional cost?