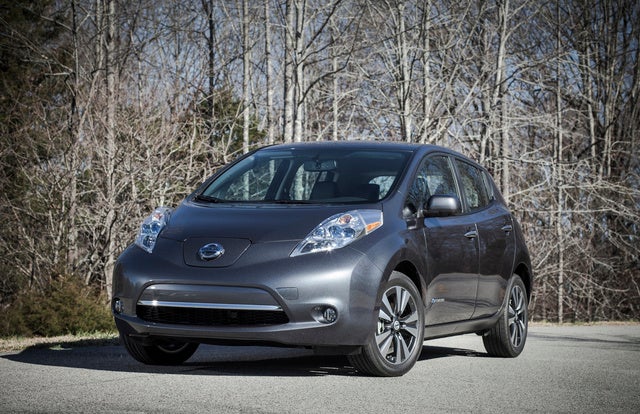 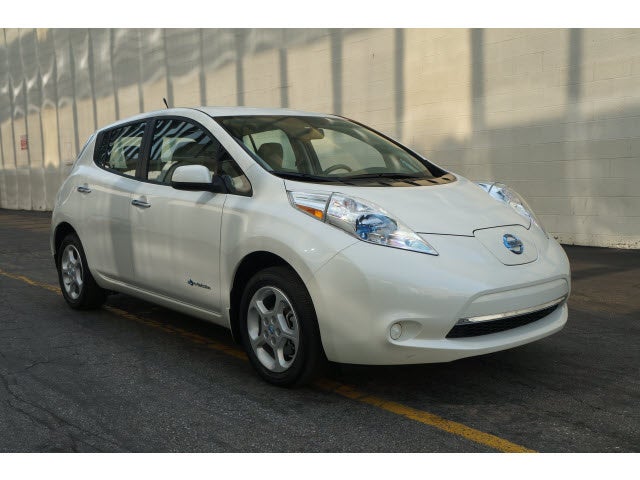 Entering its third year in production, the Nissan Leaf compact electric vehicle receives a number of updates for 2013. For starters, Nissan expands the Leaf lineup by adding an affordably priced entry-level Leaf S, which joins the mid-level Leaf SV and the luxury-oriented Leaf SL. The base Leaf becomes the least expensive electric vehicle in the country, according to the automaker. In addition, the Leaf receives a number of upgrades designed to boost efficiency, including improved exterior aerodynamics, an updated regenerative braking system, a new available onboard charger that reduces charge time by nearly half and new leather upholstery for the top-level SV trim, as well as upgraded wheels, new audio systems, a new heating system and 3 new options packages.

The updates are timed with the relocation of production of domestic Leafs to Nissan's facility in Smyrna, Tenn. The 2013 Leaf retains its 4-door, 5-seat hatchback body style with its distinctive wedge shape. Minor design updates to the bug-eyed headlights and rear end, as well as new wheels, result in a slightly lower coefficient of drag, now 0.28 from 0.29, so the Leaf can eke a few more miles out of each charge. The revisions help reduce wind noise as well, Nissan says. A flat underbody with a rear diffuser and a standard rear spoiler also help improve aerodynamics, while a compact nose and swooping side lines give the Leaf a unique exterior appearance. The top-level Leaf SL gets LED headlights and foglights, which are optional on the SV. New exterior colors for 2013 include Metallic Slate and Glacier White.

Thanks to its electric drive system, the Leaf gets the equivalent of 130 mpg, Nissan says. An 80-kilowatt electric motor, which drives the Leaf through the front wheels, continues to produce 106 hp and 207 lb-ft of torque. A single-speed reducer replaces a traditional transmission. Because 100% of torque is available at all times, the Leaf accelerates briskly and smoothly, with a top speed of 90 mph. Testers say the Leaf drives and feels much like a typical gas-powered compact car, with the notable absence of a gas tank and rear exhaust pipe, as well as associated noise from an internal combustion engine.

A 24kWh lithium-ion battery, located beneath the vehicle's floor, provides power for the electric motor. For 2013, the Leaf SV and SL trims get a new 6.6kW onboard charger, which has been relocated from the trunk to the front of the vehicle, providing more convenience and freeing up some cargo space in the trunk. The new charge port, which includes a light and a lock, reduces charging time by nearly half, to about 4 hours for a full charge when using a 220-volt outlet, Nissan says. Owners can also use a 110-volt outlet, although it significantly increases charge time. A Quick Charge Port, which comes standard on the SL and is optional on the S and SV, enables owners to charge the battery to 80% in about 30 minutes at a public charging station.

The Leaf rides on a 106.3-inch wheelbase, which is longer than the Nissan Versa's 102.4 wheelbase. Overall, however, the Leaf checks in slightly shorter than the Versa, at 175 inches vs. 175.4 inches. The Leaf sits on an independent strut suspension with stabilizer bars in both the front and rear. Speed-sensitive electric power steering and power-assisted antilock disc brakes come standard. The SL trim gets new 17-inch aluminum-alloy wheels for 2013, while the SV continues with 16-inch aluminum wheels. Nissan equips the entry-level S with 16-inch steel wheels.

Inside, the 2013 Leaf gets a number of new and updated features, including a new black interior color and standard leather upholstery for the SL trim. The Leaf's cabin seats 5 and uses eco-friendly recycled materials for some interior pieces, such as the headliner, carpet and door and roof trim. In addition, the upholstery in the SV trim contains some recycled materials. A heated leather steering wheel and heated front and rear seats come standard in all Leafs. The driver's seat features 6-way manual adjustment, while the passenger seat adjusts 4 ways manually. The S trim gets cloth upholstery, while the SV receives cloth upholstery partially made from recycled materials. The SL gets new leather seats for 2013. All Leafs also include a 60/40-split rear seat. Due to the relocated charger, cargo space for the SV and SL trims increases to 24 cubic feet behind the second row, up from 14.4 cubic feet for the previous year. Expanded cargo space with the rear seats folded down increases to 30 cubic feet, up from 24.

The S trim includes such standard features as Bluetooth, automatic temperature control, power windows and door locks, and a 4-speaker audio system with SiriusXM satellite radio, a USB port and steering-wheel-mounted audio controls. The SV and SL add cruise control, an auto-dimming rear-view mirror, an upgraded 6-speaker audio system and a navigation system with NavTraffic and NavWeather, as well as the Carwings telematics system, which enables owners to control the car's air conditioning and charging functions remotely with a smart phone. The system also locates nearby public charging stations. In addition, the SV and SL get a new hybrid heating system, which consumes less energy while providing superior heating performance during cold weather.

All Leafs come equipped with an Advanced Air Bag system, which includes dual-stage front, front seat-mounted side-impact and roof-mounted side-curtain airbags. Other safety features include Vehicle Dynamic Control with Traction Control, a tire pressure monitoring system and a vehicle security system. The IIHS gave the Leaf a top safety rating of Good for protecting passengers in frontal, side and rollover crashes, while the NHTSA gave the Leaf a rating of 5 out of 5 stars.

Owners are overwhelmingly positive about their Leafs. They say the electric vehicle is fun to drive, with brisk acceleration, due to the full torque range, and road-hugging handling, due in part to the location of the battery, which helps provide a low center of gravity. Some owners report that they're able to achieve a driving distance of up to 150 miles on a single charge, but note that at higher speeds over 50 mpg, the driving range drops significantly, to about 75 miles. Some owners say they're getting the equivalent of 140 mpg from their Leafs, and note that at most public charging stations they're paying only a few dollars for a charge. Owners also like the Leaf's interior layout and cargo capacity, as well as the instrumentation and state-of-the-art graphics, which do a good job of keeping drivers informed of the battery's existing charge and driving range. Standard features like heated seats and a heated steering wheel are also welcomed and appreciated by owners in colder climates. Overall, owners have found very few negatives about the electric vehicle and are pleased with their purchases.

Users ranked 2013 Nissan LEAF against other cars which they drove/owned. Each ranking was based on 9 categories. Here is the summary of top rankings.

Have you driven a 2013 Nissan LEAF?
Rank This Car

Completig A Purchase With Lein On The Title

What's the process for buying a car that the seller still has a lein on his title?

feel silly asking, but how do I delete radio presets? I have a 2013 Nissan Leaf without the navigation system. I accidentally (?) set on AM radio preset and one FM2 radion preset, and I want to de...

What Does It Cost To Charge A Neon Leaf?

Do Heater Switches Need Programmed In

How Many Miles 2013 Nissan Leaf Before Recharge?