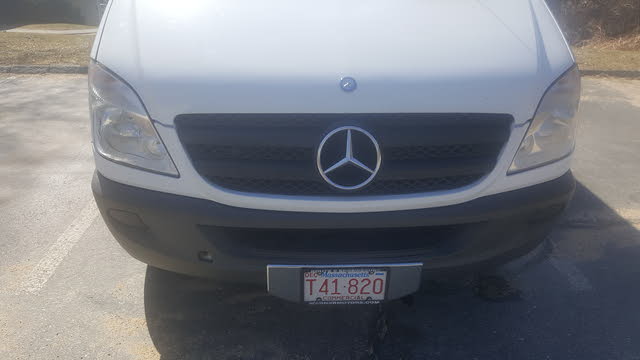 This nimble utility van moves into its fourth year under the Mercedes-Benz banner much like its second year, again, without a single significant change aside from a new front fascia for 2013 until 2017. Not that the Sprinter needed a lot of changes since its 2002 debut with Freightliner, but Dodge did make some needed usability and driving dynamics improvements during the Sprinter's 7 years with Chrysler. Freightliner still makes an almost identical Sprinter for about $1,000 less, but savvy hosts have their reasons to prefer the cachet of a Benz. That said, with the fuel-efficient 2013 Citan and ultra-modern 2014 Viano hitting the streets, the Sprinter is beginning to fade into very specialized and purely commercial markets since it lacks any kind of all-wheel or 4-wheel drive, significant power or comforts for large-family purposes.

Still, the Sprinter does have its unique high points—well, aside from its optional higher roof that allows someone up to 6-foot-6 to walk upright inside where American makers offer no better than a foot less. Only Nissan brings similar utility to the table with its NV, but absolutely no maker offers much more than half the interior space of a Sprinter in its largest configurations, and the Benz's suspension is uniquely adept at handling an otherwise inherently wobbly class. On the downside, nobody would accuse the Sprinter of living up to its name. Although its 3-liter V6 turbodiesel's output amounts to 188 hp and 325 lb-ft of torque without a fuel economy estimate or zip-to-60-mph benchmark test, those with their hands on one say it's safe to expect great fuel economy and acceleration best suited to purely city driving. It offers plenty of torque in all the right places for a smooth start no matter the load, but highway speeds are not the Sprinter's cup of tea.

Offered in 3 lengths, 2 wheelbases and 2 heights in three-quarter-ton and one-ton ratings, individual configurations are dizzying and stem directly from the Cargo, Crew, Passenger and MiniBus designations. Cargo vans offer 2 front captain's chairs, the Crew adds a second-row bench and Passenger vans offer 4 rows for 12 occupants. The 170-inch "extended" wheelbase MiniBus is apparently reserved for fleet accounts (though you wouldn't find any amenities like copious cup holders or other family-use considerations anywhere in the lineup anyway), but its 5 rows can comfortably accommodate up to 15 guests. Cargo, Crew and Passenger levels are available in both the shorter 140-inch and extended wheelbases, but the one-ton-rated 3500 nameplate—as opposed to the three-quarter-ton 2500—and longest body length are offered only as a High Roof Cargo version.

Including 2 or 4 speakers for its stereo depending on the designation, the default interior accoutrements certainly make no attempt to emulate your personal Mercedes-Benz, but this Sprinter is highly superior to any other full-size van in its attention to function-specific details. Some of those details include wood floors and 270 degrees of swing for the doors in a Cargo, side windows for the Crew, tinted rear windows for Passenger versions and an electric 2-panel side door to ease loading and unloading in the MiniBus. Options are vast and include stereo and seating upgrades, a speed limiter, heated windshield, automated conveniences and basically anything you could need to specifically customize a Sprinter to your urban transport needs.

What's your take on the 2013 Mercedes-Benz Sprinter?

Users ranked 2013 Mercedes-Benz Sprinter against other cars which they drove/owned. Each ranking was based on 9 categories. Here is the summary of top rankings.

Have you driven a 2013 Mercedes-Benz Sprinter?
Rank This Car

Count Me In On Class Action Lawsuit. Viva La Lawsuit.