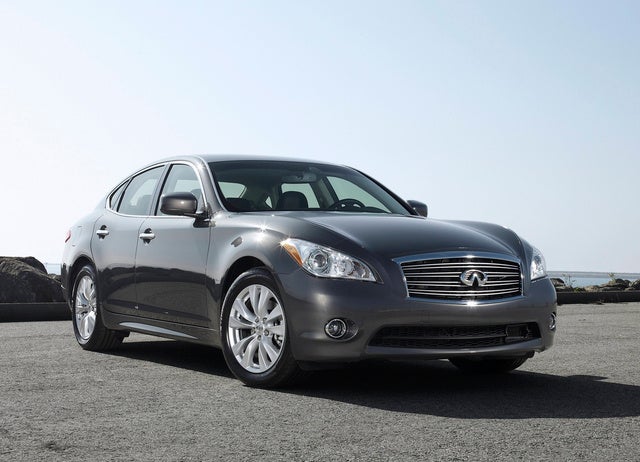 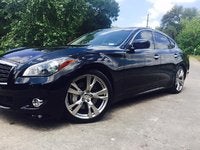 Following a 2011 redesign and the 2012 debut of a new hybrid brother, Infiniti continues to sweeten its flagship midsize M sedan for 2013 with a couple new features for all M models and a few shuffled option packs. Auto-dimming sideview mirrors and an automatic trunk cincher are newly standard additions for every M model, but most exciting for M37 fans with a need for all-wheel drive (AWD) and a desire for sporting dynamics is the addition of the ever-popular Sport Package to available options for the so-named M37x AWD trim. Aside from that a couple of universally available option packs have some new and reshuffled features for 2013.

Nothing else changes about the basic M lineup for 2013, which includes the rear-wheel-drive (RWD) M37 and AWD M37x basically exactly as they were for 2012, excepting the upgrades of course. Both are still powered by the same class-leading 330-hp and 270-lb-ft of torque 3.7-liter V6 sending power through a 7-speed auto-manual with overdrive and 4 shift modes—Standard, Sport, Snow and Eco—to optimize efficiency depending on conditions, though it fetches only about 18 mpg city/26 highway at best with RWD. This pairing is capable of getting from zip to 60 mph in 5.9 seconds, and though this puts the M37 almost a full second behind its bigger brothers, the general consensus of drivers is that the M37 is the most nimble of the bunch, because it's lighter.

The most exciting news for 2013 is that instead of spending upwards of $5,000 for aftermarket parts to make the AWD M37x just look more sporting, the M37x is now available with Sport Package upgrades for a complete performance machine. This includes 20-inch aluminum-alloy wheels, a sport-tuned suspension, sport brakes, solid magnesium paddle shifters, more supportive sport seats and a sportier front end. The high-performance M56 sees a few more exclusive additions to this list for 2013, but you should be able to get most of those if the Sport Touring package is also newly available to M37x buyers. This would include a 16-speaker Surround-Sound Bose system, Forest Air purification and a power rear sunshade.

Either way, opting for any Sport package opens up the new Sport Stone interior color scheme. A renewed Tire and Wheel Package now offers sport brakes and 20-inch alloy wheels and tires as opposed to the previous 18-inch set, and that would be the last update for 2013. Without any significant changes to the mechanicals or materials, the M37 carries into 2013 as the very same beloved M37 with ample seating for 5, awe-inspiring interior combinations, buttoned-down responsive dynamics and the general peace of mind one would expect from a luxury flagship. Redesigning the M35 into the class-leading powerhouse M37 for 2011 could not have been better done, and it just keeps getting better. This reviewer has just one choice word left for Infiniti: Bravo!

Users ranked 2013 INFINITI M37 against other cars which they drove/owned. Each ranking was based on 9 categories. Here is the summary of top rankings.

I Change My Water Connector Hose Now Car Is Overheating

So the water connector hose cracked and I changed it, my car was never overheating and it was perfectly fine I could not find the part for one day so I left my car sitting I finally change the part...

CAN NOT RUNNING VEHICLE FOR 4 DAYS RESULT IN LOW BATTERY EVEN IF THERE IS NO ELECTRICAL/MECHANICAL ISSUES. MY MECHANIC SAYS YES. A CAR ORIENTED FRIEND SAYS IMPOSSIBLE, THERE HAS TO BE SOME TYPE OF ...

Why Is There A Question Mark On My Screen?

What would be the best way to purchase a new car ,with 5,000 in negative equity on a trade?

55 views with no answers yet