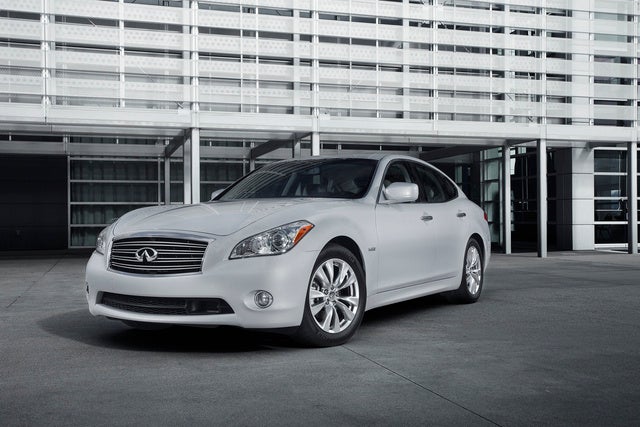 The apparently perfect-at-birth Infiniti M Hybrid toddles into its second year exactly the same as its first, carrying over from 2012 with zero individual changes and zero driver complaints. The only changes to the 2013 M35h are the very same you will find in every other M series model: new auto-dimming sideview mirrors, an automatic trunk cinch and some shuffling of the option packs. Surely it helps that Infiniti based the M35h on an existing duo of successful midsize sedans, but Murphy's Law is historically impossible for automakers to outsmart—yet Infiniti has shown itself to be a master of the impossible not just by making the M35h perfect at its debut, but also by making the M35h at all.

As if I wasn't impressed enough by the M Hybrid when I first reviewed it for the debut, it's another matter entirely to see it stand the initial test of time—getting through the debut year without reality shattering every promise. Infiniti's parent company Nissan took a big risk putting its first hybrid engine with so many high-tech bells and whistles on the consumer market in a grand first step toward independence from Toyota-built technology, and it has paid off very well. Its key to success is making the M Hybrid something no other maker offers in its hybrids: full-throttle V8-like sport performance with mileage of 27 mpg city/32 highway. Though it does require premium fuel, this feat is nevertheless new to affordable automaking.

In sum, the M35h doesn't just have a gas-electric hybrid engine, but it is also a sort of hybrid mix of its two M brothers. Feature content mirrors that of its M37 brother, and in terms of performance the V8-powered M56 may well have another 100 horsepower and lb-ft of torque on paper, but both the M35h and M56 reach 60 mph from a standstill in just over 5 seconds. Excepting 4 fewer cubic feet of trunk space, the M-optional sport suspension included by default and a few special mechanical bits for the hybrid engine, the M35h is exactly as you would expect of other M models and as such is available with all the same upgrades.

The only obvious differences between the pure-gas M models and the M35h are the badging and a complete lack of engine sound at low speeds, such that a noise-making first-ever Vehicle Sound for Pedestrians (VSP) module is needed to make sure this nimble ninja doesn't catch pedestrians unaware. Not even interior cabin space is compromised by the change in mechanicals, nor materials or workmanship. Only the trunk is abridged to just over 11 cubic feet of available space.

Although the electric engine and lithium-ion battery can only handle up to 62 mph for up to 1.2 miles on its own, the 302-hp 3.5-liter V6 gas engine is specially modified to make the most of the partnership's every ability and 360 net hp. Various parts of the engine and drivetrain automatically shut off when they're not in use, enabling the M35h to run on electric power alone about half the time in mixed driving. Power is directed to the rear wheels through a 7-speed automatic designed specifically for this unique application that offers overdrive and auto-manual capabilities.

If economy is a top-notch priority, Infiniti offers an Eco pedal to encourage fuel-efficient driving as an option. Additional noteworthy options include a power rear sunshade, Forest Air purification, 16-speaker Bose Surround-Sound system, adaptive cruise control and safety considerations such as a lane-departure warning and prevention system, blind-spot warning system and a forward-collision warning system for a truly winning combination worthy of a spot on your short list for a fun and secure daily driver.

Is There A Back Up Camera? And How Is The Navigational System?