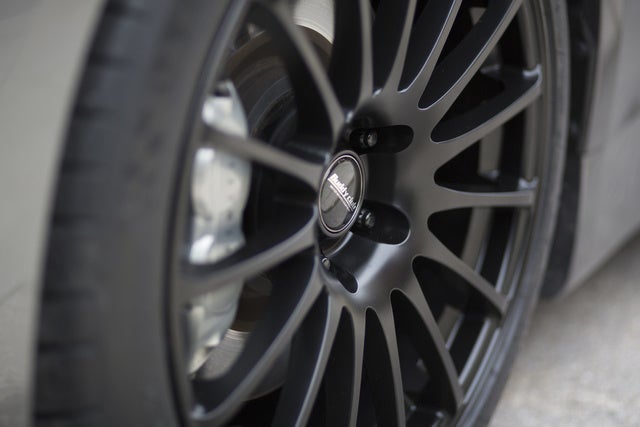 Looking for a Used IPL G in your area?

Infiniti's Performance Line (IPL) expands beyond the G Coupe for 2013 to include an IPL G Convertible trim, and so the IPL G Coupe carries over into 2013 with just a couple cosmetic changes after a bit of a 2012 engine and trim shuffle. As more of the basic G models fall from Infiniti's lineup for 2013, it's becoming increasingly clear the maker is moving into a strictly performance-focused lineup. Infiniti's latest engines and styles definitely fit the first-in-class bill, but some areas of the IPL G Coupe are a bit less refined than more established luxury performance makes.

The IPL differentiates itself from the G37 pack with a retuned version of the 3.7-liter engine, a slightly stiffened suspension, rear spoiler, 19-inch graphite-finished alloy wheels, performance tires and unique styling for the front and rear ends. Although the IPL is a far cry from a Model T, you can get it in any color you like—so long as you like black or graphite. At least unlike Henry Ford, Infiniti offers an option. Not so for the drivetrain, which is purely rear-wheel drive mated to a 6-speed manual.

While the 3.7-liter V6 affords quite enough pep with its 348 hp and 276 lb-ft of torque in the IPL G Coupe, BMW's 335i is still quicker than the G Coupe's 5.5 seconds to 60 mph. That is possibly due in part to the noticeable torque jerk in upshifting and definitely a side-effect of the IPL weighing in at just under 4,000 pounds. Altogether that's probably why the IPL G Coupe sounds a bit rough at higher revs, and definitely a good reason not to expect better than 17 mpg city/25 highway with premium fuel. Of course it's not meant to be a "halo performer" in the words of Infiniti, but rather an incremental step up from modern-day sporting performance while still being affordable. As one early driver put it, IPL could well stand for "Increases Prices Little" or "Increases Performance Little."

Likely least of driver concerns is the trunk being a mere 7.4 cubic feet, but since you can't fit adults in the 2 rear seats anyway, you're not losing much by folding those down for more cargo space. At least if you need those back seats, the fronts lightly move forward with the push of a button. As for more significant complaints, there don't appear to be any. Either Infiniti owners are too busy enjoying their IPL G Coupe to leave a single review anywhere, or they're so dissatisfied their ownership didn't last long enough to merit a write-up, which I'm inclined to think is too ridiculous to be believed. Glossies are quick to criticize its engine sounds and trunk space, but the IPL G Coupe seems to satisfy where it matters—in the real world.

The magazines and major review sites are also quick to criticize its options setup, calling it an expensive jumble, but failing to realize the IPL G Coupe includes the Premium, Sport and Navigation packages by default for a few grand more than a not-quite comparably equipped G37 Sport 6MT. The IPL carves corners better than the Sport, accelerates better with its opened exhaust and retuned engine and offers features like memory settings for 2 drivers including steering-wheel position. Sure, there's no short shifter or unique sport seats, but the IPL G is not made to be an elitist performance machine—just an enticing notch above average.

Have you driven a 2013 INFINITI IPL G?
Rank This Car

Looking for a Used IPL G in your area?