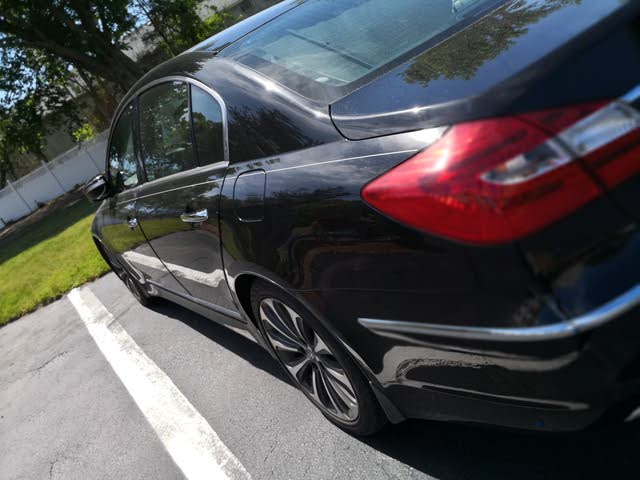 After a major refresh of a 2009 debut for 2012, Hyundai's luxurious rear-wheel-drive (RWD) full-size sedan moves into 2013 with an improved optional infotainment system with 8-inch touchscreen and basically only the new trims introduced for 2012. That leaves just 2 trims for 2013, the basic Genesis 3.8L, powered by the new direct-injected 333-hp 3.8-liter V6, or the direct-injected 429-hp V8-powered 5.0L R-Spec. Looking at driver reviews, eliminating the 4.6-liter V8 and any option for the 5-liter without the R-Spec's sporting suspension could be a big mistake. Everything is there for an excellent mid-luxury offering, including stellar build quality, but Hyundai chose a very crowded and very narrow market with this move, and that could slow its meteoric rise.

The drivetrain, cabin quiet and materials are all up to par with its luxury competition, and typical of Hyundai, the Genesis's features exceed its price range. But for all its perks, the Genesis suffers from enough drawbacks—beyond being made by a company not typically associated with luxury—to turn up more than a few noses, even after turning their heads. As far as full-size sedans go, at no better than 28 mpg the Genesis is bound to not go as far as most between fill-ups even with a 19-gallon fuel tank, but the Genesis isn't an economical commuter. It's more like a fun touring, with more "touring" in the 3.8 and more "fun" in the R-Spec, but I say "more like" because neither one offers a great deal of road-tripping practicality. For instance, 6-foot-plus passengers can enjoy any of its 5 seats, though none of those seats fold down for additional storage above the trunk's 16 cubic feet, and the steering wheel doesn't telescope unless you opt up for it. In other words, a maker not of typical luxury pedigree has made a full-size sedan not of typical luxury pedigree, so a detailed test-drive is a must.

While the new engines are still drool-worthy, the R-Spec joined the lineup for 2012 to a mix of praise and criticism. Its 429-hp and 376-lb-ft/torque V8 performs admirably well, but the 8-speed shiftable automatic (which became the Genesis standard for 2012) tends to hold it back to roughly 5.1 seconds to 60 mph with sluggish downshifts. Its suspension won't win any rally cup, but it will offer an expectedly rough ride with reasonable if not exhilarating response for its sport tuning. Fuel economy is a lackluster 16 mpg city/25 highway, but at least the R-Spec can use regular fuel, although premium is recommended. The V6 is good for 333 hp and 291 lb-ft of torque and a competitive 6.4 seconds to 60 mph, and though this one is happy with a regular diet, fuel economy is barely improved at 18/28.

While its performance could easily disappoint the most particular drivers, build quality is better than most luxury makes, and in terms of feature bang for your buck, there's never a better maker than Hyundai. Even the base 3.8L comes equipped with features like alloy wheels, automatic headlights, LED running lights, automatic wipers, leather upholstery, an auto-dimming rear-view, automatic dual-zone climate control, keyless ignition and entry, heated front seats, Bluetooth and iPod connectivity with a 7-speaker system and CD player. A fully-loaded 3.8L only misses out on 1 inch in wheel size, auto-dimming side mirrors and the performance bits that make the R-Spec unique. Highlights of those optional features include a 17-speaker Lexicon sound system, full leather interior, memory for driver's settings, rear-view camera, adaptive cruise control, sensors galore and Hyundai's BlueLink telematics system, just to name a few.

What's your take on the 2013 Hyundai Genesis?

Guru9JD2V Mine is superior. Never needed or had a better vehicle. This was the breakout year for Hyundai, laying the foundation for the Genesis stand alone.

Have you driven a 2013 Hyundai Genesis?
Rank This Car

How Do I Find A Listing For A Car That I Recently Purchased?

I would like to review a listing for a car that I purchased. I assume since the car sold, that the listing is closed. Is there an archive that is accessible?

can i update my navigation on genesis 2013

I Have A Hyundai Genises 2013 Replaced Battery In Key Fob And Now I Can’t O...