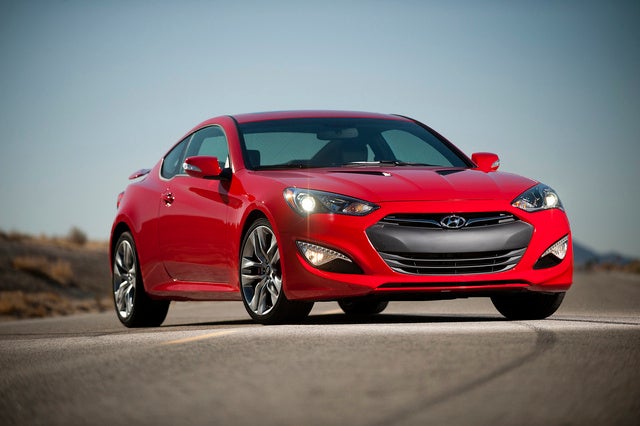 It took just five years. The Hyundai Genesis Coupe has gained some impressive power in 2013 and lost all of its character. Some may call that excessive, but do you remember the press at the time of the Genesis’ launch, back in 2008? People raved about its sporty nature, and its price. They complimented its performance-oriented design, and the price. They called it a nimble and pure vision of a sports car, and that price was just so incredibly low! A clunky transmission and a raspy engine could be forgiven and hard plastic interior overlooked. It was the bargain of the century.

So what are you getting for that extra scratch? First, a lot of extra power. Both the 2.0-liter 4-cylinder Theta and 3.8-liter Lambda V6 engines are upgraded with direct injection and a compression boost, while the 2.0 sees a new twin-scroll turbocharger and a larger intercooler. This helps the 2.0’s hp figures jump from 210 to 274, while its torque number rises from 223 lb-ft to 275, as long as you let the Genesis drink premium fuel.

The Lambda V6 has to settle for natural aspiration, but still manages a 42-hp bump up to a total of 348, while torque makes a similar climb to 295 lb-ft from last years’ rating of 266. The 3.8 drinks the good stuff, too, but either engine will do just fine on regular fuel, as long as you’re okay with losing a couple of horses at the rear wheels.

The 6-speed manual has been reworked as well, as Hyundai aimed to address complaints about its chunky, unruly character. While the company improved both gear selection and pedal feel, testers report there are still bugs to work out, and the Genesis Coupe is far from boasting about one of the best manual transmissions on the market. That said, the take rate for the 3-pedal setup hovers around 30% for the V6 and isn’t much less with the 4, so someone must like it. If it’s a big issue, feel free to go with the 6-speed automatic carryover with the 2.0 or the new 8-speed automatic with paddle shifters for the 3.8. If that sort of setup suits you, it’s already gotten some great feedback as the new slushbox on the shelf.

The other big complaint the Genesis has weathered has surrounded its ride comfort. On the track, its stiff suspension setups are wonderful for delivering the kind of feedback necessary to push a RWD car through the turns. On the street, it moonlights as a dowsing rod for back problems, as every rip, ripple and recess is transmuted through the chassis straight to your spine. For 2013, the front dampers have been replaced with more forgiving pieces, but stick with the 18-inch wheels for the best ride you can get. Anything else and you’re severely compromising daily driveability. Don’t be surprised by the quicker steering, either. With a ratio now set at 13.8:1 versus 14.9 last year, Hyundai is looking to combat some of that understeer so many complained about. If you’re really ambitious, start adjusting the front camber via the dual nuts in the glove compartment.

And of course there are the aesthetic adjustments, both inside and out. A more severe front end features fake hood scoops and styling that many have referred to as “Veloster-inspired.” Up to you whether that’s heading in a visual direction you like, but you’ll spend more time looking at the inside from behind the wheel anyway. Interior materials have been improved as well, with more soft-touch, vinyl and even some stitching to add some high-class appeal.

In all, the Genesis is morphing into more of a discount grand touring machine than a budget racer. The first iteration is over, the second chapter of the Genesis legend has begun. There’s no doubting the 2013 Genesis is the best yet, but there’s no denying it’s taken its first step into a larger world. From here, it’ll only get heavier and more dear.

What's your take on the 2013 Hyundai Genesis Coupe?

TexityTex The Genesis Coupe is far and away the best Coupe I've ever owned. I've had Porsches, a Mustang, Acuras, and Nissans, but the Genesis Coupe 3.8 Track blew them all away. Luxury Sport is the name of the game, and it nails it. I miss my "Geni" greatly and selling her absolutely broke my heart. As far as the looks of the car goes, prepare for Gawking and Rubber-Necking. This car turns heads. Even before I rebadged the car to the famous "Wing" badge I would have people ask me daily, what it was, was it fast, or just compliment it in general. If you're looking for high-end sport, on a beer budget, you owe it to yourself to test drive the Genesis Coupe.

Users ranked 2013 Hyundai Genesis Coupe against other cars which they drove/owned. Each ranking was based on 9 categories. Here is the summary of top rankings.

Have you driven a 2013 Hyundai Genesis Coupe?
Rank This Car

Hyundai Won't Turn On Getting No Power?

I have a 2013 Hyundai Genesis and the battery was bad so I got a new battery put it in, and tried to start it up and and am now getting no power whatsoever the key fob doesn't even work and vehicle...

What are these yellow/orgage spots popping up over my bumper? It started with these and now it appears my paint is beginning to bubble/peel.

Why does Cargurus suggested asking price for privately owned and dealer sold vehicles differ? When I'm selling the car at the price I'm asking for, it is deemed "High", but when a dealer sells the s...

How do I pay CarGurus when the buyer offers me cash for the transaction?

How Can I Find My Add