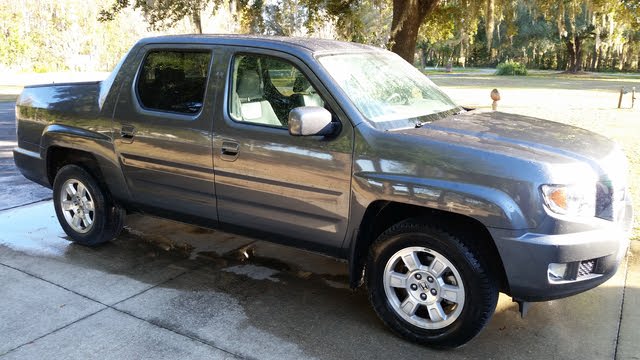 Average user score
4.2 ⁄ 5 stars
Based on 12 reviews
Great Urban Truck by Sherrill — Awesome ride and handling; roomy and comfortable cabin; dent-resistant, no rust, bed with an extremely useful trunk compartment and two-way tailgate. Backseat flips up to help haul extra tall items in... Read more
Review by ava — I have liked this vehicle every since it first came out, now I am finally going to get the pleasure of owning one!!! It is known as the “ Cadillac”, off mid-sized trucks!!!! Read more
Review by Ridgelinelady — I like the older model Honda Ridgelines before they switched over to putting a truck bed on a Honda Pilot and calling it a truck. Read more

The hunky Ridgeline, Honda’s unique pickup, roars into 2013, albeit with few changes since last year’s refresh. There are 5 levels of trim, all of which include the Ridgeline’s 5-passenger Crew cab coupled with its distinctive stubby rear end truck bed. Under the hood is a peppy 3.5-liter V6 engine with 250 hp and 247 lb-ft of torque; AWD and a 5-speed automatic transmission are also standard.

This vehicle is aimed at families who use their truck for recreation, not work. The unibody suspension and full-frame construction helps emphasize passenger comfort at all levels of trim. The base trim, called the RT, sits atop a 17-inch wheelbase and comes with features such as daytime running lights, integrated bed lights and a 7-pin trailer harness. A dual-action tailgate can flip or swing open.

The next level, Sport, adds 18-inch wheels, an auxiliary input jack and a black front grille. Next up, the RTS, includes dual-zone climate control, an exterior thermometer and a leather-wrapped steering wheel. The top-of-the-line RTL leatherizes the surfaces, heats the front seats and adds Bluetooth; a navigation system is also available.

For tailgaters, the good news is that all trims include a trunk under the bed that can also be used as an ice chest.

New this year is the inclusion of a rear-view camera across all levels of trim, which is an attempt to alleviate the Ridgeline’s noted visibility problems, especially when parking. Some feel a blind-spot monitoring system would be a welcome addition.

Frankly, the Ridgeline has never been a huge hit with critics or consumers. With its low gas mileage (15 mpg city/21 highway), freakish looks and not-quite-full-size truck bed (it's only 5 feet long), the Ridgeline has stiff competition in Ford's F-150 and GMC's Sierra.

But the Ridgeline does get points for its handling, which is more akin to that of a passenger vehicle than a truck. And there are those who enjoy the convenience of a small flatbed and the comfort of an SUV, especially when going camping with the ATV, as depicted in the Honda brochure. The vehicle can hold up to 1,550 pounds of payload and tow up to 5,000, which is not too shabby.

Safety features include stability and traction control, dual-stage front, front side, and side curtain airbags, and LATCH anchors for child seats. The 2012 model was a Top Safety Pick by the IIHS, receiving the highest possible score in all areas, and the new version should fare just as well.

What's your take on the 2013 Honda Ridgeline?

migration_Hornbeam I'm a contractor, own 5 trucks &have owned more than 20 pickups,all have their advantages, but the Ridgeline is the best truck I've ever owned. It works every day,can carry a crew of 4 comfortably while hauling a half ton of tools. Drives like a dream,safe & reliable.I have other trucks for other purposes,but the Ridgeline is the truck of choice for carrying crew & tools to the job site.

Have you driven a 2013 Honda Ridgeline?
Rank This Car

Can You Please Renew My Ad

i want to renew my ad

I had a battery replaced it the other day and when I drove it today the radio will not work. It is asking for a code. What might that be

188 views with 1 answer (last answer about a year ago)

Is There Any Way To View A Listing(photos,info) That Has Expired? I Still H...