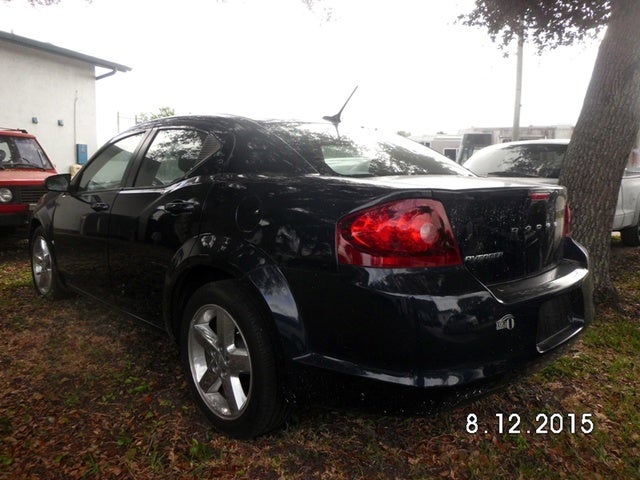 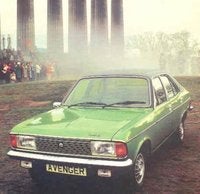 The Avenger lives. Rumored to have been on the chopping block, Dodge keeps its 4-door midsize sedan in production for 2013. Could it have something to do with the worldwide popularity of the comic-book movie "The Avengers"? It probably didn’t hurt.

The vehicle continues without much change from 2012, with two engines and four trims. There is the base SE, whose powers include a 2.4-liter inline 4-cylinder making 173 hp and 166 lb-ft of torque mated to a 4-speed automatic transmission; keyless entry, power windows and steering-wheel-mounted controls are also in its utility belt. Next is the SXT, which has the same engine and transmission standard, but adds X-Ray Vision and a Frost Deflecting Shield (a.k.a. fog lights and heated door mirrors). Dual exhaust pipes, a rear spoiler and 18-inch aluminum wheels are some of its other eye-catching standard features. The EPA estimates mileage for the SE at a so-so 21 mpg city/30 hwy and the SXT at 20/31.

But things don’t get really fantastic unless you opt for the 3.6-liter Flex-Fuel V6 that makes 283 hp and 260 lb-ft of torque, which was introduced last year in the SE V6. That engine is available this year in the SXT and is standard in the top-of-the-line R/T (EPA 19/29). This powerful engine is teamed with a 6-speed automatic transmission. All the Avengers are front-wheel-drive machines.

The exterior’s creased hood, headlights and front grille are aggressive and do remind one of an armor-covered superhero. The interior, while not awe-inspiring, is clean, with bright analog dials, contrast stitching and comfortable cloth seats with manually adjusted lumbar support standard on all levels. The 60/40-split rear seat includes a handy trunk pass-thru for carrying longer items.

The Avenger is reported to handle well, but many feel the 4-cylinder is not as zippy as some of its competitors; however, the V6 has been getting high marks. Overall, both drivers and critics seem pleased with the car—and the proof is the fact that sales are up 112%. Safety features include antilock brakes, electronic stability control, and front and side curtain airbags.

The sedan’s sporty styling and competitive pricing seem to be working. With the recent merger of Fiat and Chrysler in full swing, rumors abound as to what’s in store for the Avenger's next revamp, now that it's been rescued from the scrap yard. If they could only make it fly and save the world from imminent destruction, they’d be on to something.

Samuel BEAUTIFUL CAR, LOOKS SICK IN BLACK. 6 CYL IS QUICK, LIKES HIGH SPEED AND STILL GET'S 30 mpg. BRAKE'S NEED UPGRADE, AS WELL AS SUSPENSION. CHANGED OUT TO NEW SPORT MICHELIN TIRES, CONTROL ARM & STRUTS. THE CAR KIND OF LUMBERS THRU LOCAL TRAFFIC, AND HAS BAD BLIND SPOTS. NO CAMERA OR GPS DISPLAY. BLACKED OUT WINDOWS, AND I PUT ON WINDOW SHEILDS TO CRACK THE WINDOW, KEEPING IT COOL, AND DRY IF IT RAINS. WOULD LIKE TO GO THE NEXT LEVEL AND ADD A FULL PREFORMANCE PACKAGE. WHAT AN AWESOME MACHINE IT WOULD BE.!!

Users ranked 2013 Dodge Avenger against other cars which they drove/owned. Each ranking was based on 9 categories. Here is the summary of top rankings.

Have you driven a 2013 Dodge Avenger?
Rank This Car

Can Someone Give Me Any Advice?

I own a Dodge avenger se 2.4L v4 engine and I want to give it as much horse power I can, can I add a turbo to it? Or any other engine modifications I can add? Right now it just got a k&n cool air...

How Do I Edit A Listing

I’m trying to edit my listing. The pictures are rotated and Id like to lower the price

Can Someone Give Any Advice?