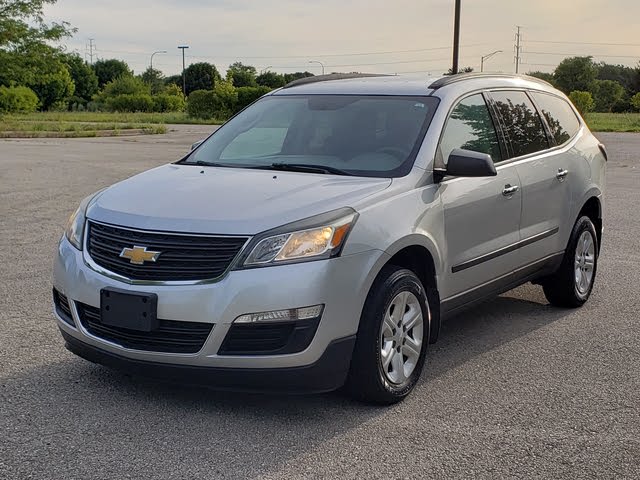 The four-year-old Chevy Traverse gets a refresh inside and out for the 2013 model year. The popular 3-row SUV gets a nip and tuck in the rear and a brand-new shiny nose. Chevy's classic golden logo now sits upon a triple-chrome grille, and the hatch and taillights have been reworked. These changes are mild to be sure—it's the interior that got the biggest makeover.

Trim-wise, the 2013 Traverse includes the same levels as last year: the base 1LT as well as 2LT, LS and LTZ. Each level is available with either front-wheel drive (FWD) or all-wheel drive (AWD). While specifics have not been released, they are expected to be in line with previous offerings.

Under the hood, Chevy relies on the same 3.6-liter V6 engine with 281 hp and 266 lb-ft of torque, disappointing those who were hoping for more power. The 6-speed manual transmission has received some upgrades designed to improve shifting, yet it only maintains the same fuel economy as the outgoing model: 17 mpg city/24 highway is estimated for front-wheel drive versions, 16/23 for AWD trims. New shocks and suspension tweaks promise a smoother ride, while the vehicle's towing capacity stays at 5,200 pounds.

Inside is where the reworked Traverse really shines. Gone is the plastic-heavy paneling of yore; in its place are more elegant wood, cloth, leather and chrome accents. Contrast stitching and more fashion-forward color options also add to its luster.

The 2013 Traverse's cabin is also a little bit roomier than last year's, still holding 8 passengers in 3 rows with the bench, 7 if one opts for the captain's chairs. The popular SmartSlide feature for the second-row bench makes access to the third row a snap, even for the kids.

Also new this year is integration of the voice-activated MyLink system into higher trims. This system easily connects with the driver's smartphone via a 6.5-inch touchscreen. The center stack has also been redesigned for a more upscale feel.

Since a majority of Traverse customers are families, improvements have been made in its standard safety features. The 2013 edition includes the introduction of the industry's first front-center airbag, which inflates between the driver and front-seat passenger to add a new level of safety during side-impact accidents. Electronic stability control, a rear-view camera, 4-wheel disc brakes and front-and-side-curtain airbags are all standard; blind spot and rear cross-traffic alerts are available.

All in all, the 2013 is still the same Traverse, albeit with a new nose to bring it in line with the rest of its crossover family. Some may say it's bland, others may complain about its low MPG, but those in the market for a full-size SUV probably already know what they are getting into and won't be disappointed.

What's your take on the 2013 Chevrolet Traverse?

Have you driven a 2013 Chevrolet Traverse?
Rank This Car

It was morning and I stopped to get gas. When I got back in my car to start it the motor just cranked and wouldn't start. It did this 3 times. I turned the key off after each time. On the 4th try it...

Engine Light, But No Crank

Tried to start car, engine light comes on, won't even crank. Ideas? Thinking starter but it would crank wouldn't it?

I Have A 2013 Chevy Traverse Never Had Much Problems At All With It. I Drov...

I have a 2013 Chevy Traverse never had much problems at all with it. I drove it today and it shut off with an issue with the battery, I knew right away that it was the alternator. I had it checked o...

Good Deal Or Not