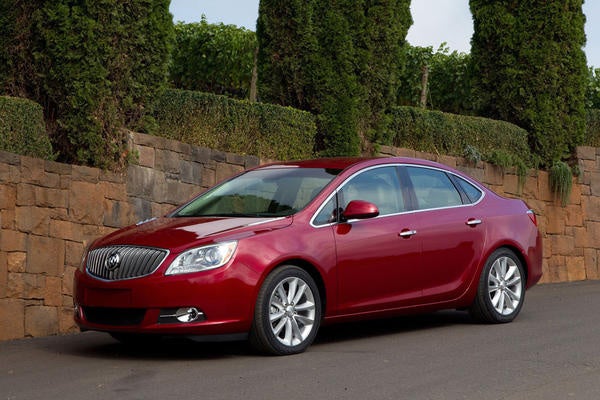 A posh ride, quiet cabin, a plethora of standard goodies and some hefty trunk space and value-laden pricing, not to mention the newly available turbocharged powerplant, keep Buick’s down-sized 2013 Verano 4-door a winner.

Lackluster acceleration from the base 4-cylinder engine, some cramped rear-seat room, less-than-alert handling characteristics and a confusing array of buttons on the center stack all continue to dog the entry-level-luxury 2013 Verano sedan.

If there’s one thing that Buick’s 2013 Verano compact sedan lineup proves, it’s that compact doesn’t necessarily mean contemptible. This downsized 4-door carries enough bells and whistles to satisfy the entry-level-luxury aficionado, while a new turbocharged four-banger adds some much needed power and pizzazz. All in all, the pint-size Verano offers some perfectly proportioned posh for budget-friendly bucks.

Small plus luxury plus style equals value in the 2013 Buick Verano compact sedan. This little 4-door seats 5 in what many call entry-level luxury comfort, as well as toting a massive (for its compact dimensions) 14.3 cubic feet of trunk space, scads of standard features and for 2013, an available turbocharged 4-cylinder powerplant. And best of all, these imposing attributes can be had for a surprisingly affordable price.

This is the Verano’s second year of production, and already the folks at Buick have begun the inevitable tweaking. Perhaps the most significant upgrade for this year is the new Premium trim added to the original base Verano, the midlevel Convenience and what is now the upper-midlevel Leather. The Premium flaunts a turbocharged 2.0-liter inline 4-cylinder (I4) engine that ought to take a bit of the tepid-acceleration stigma off the standard normally aspirated 2.4-liter four-banger that’s standard with the 3 lower trims. Additional changes for 2013 include a standard blind-spot warning system and rear cross-path warning installed in all trims except the Base.

Thus far, reviewers remain impressed with the fact that Buick’s little 4-door stacks up so well against more expensive compact and midsize luxury sedans. Indeed the Verano is claimed by a few reviewers to surpass its closest rival, the Acura ILX, in value, ride comfort and overall refinement.

Before rushing down to your closest Buick dealership, however, it should also be noted that this budget-friendly Buick is, at bottom, a glorified Chevy Cruze. Sure, it has the ride comfort of a posh, full-size sedan, and wheel-flicking maneuverability reflects its pint-size measurements, but those same measurements mean cabin room is a bit compromised compared to a midsize or full-size 4-door, with rear-seat room especially tight.

So, check out similarly sized vehicles, such as Acura’s ILX and Audi’s A3, and maybe you’ll find the significantly steeper price of these rivals quenches that thirst for status. Or, if something a little larger is called for, the flagship trims of the Ford Fusion or the Nissan Altima might be worth a tire kick or two. But those empty-nest couples looking for value in their entry-level sedan would do well to consider Buick’s latest compact 4-door. 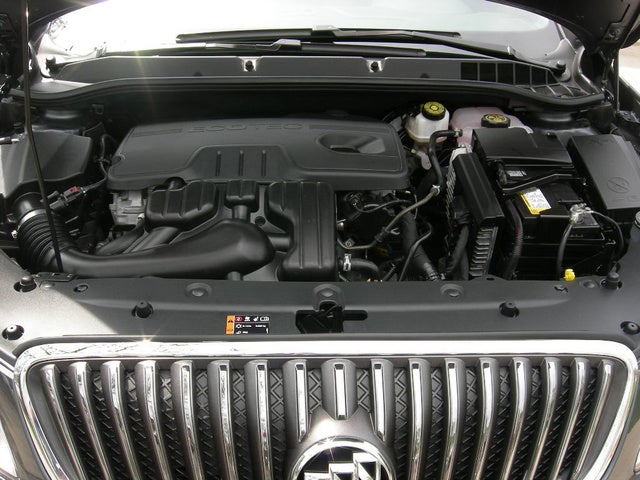 The standard powertrain for the 2013 Verano Base, Convenience and Leather remains a variable-valve-timed and FlexFuel-capable 2.4-liter inline 4-cylinder (I4) engine and a 6-speed shiftable automatic transmission. Look for 180 hp at 6,700 rpm and 171 lb-ft of torque at 4,900 rpm from this economy-minded drivetrain, with mileage again estimated at a pretty hefty 21 mpg city/32 highway when burning regular unleaded.

The just-introduced Verano Premium sports a VVT 2.0-liter turbocharged I4 powerplant that mates with either the standard 6-speed shiftable automatic or an available 6-speed manual transmission for 250 hp at 5,300 rpm and 260 lb-ft of torque at 2,000 rpm. Mileage drops a bit to 21/30 with the automatic transmission aboard and a somewhat dismal 20/24 using only premium-grade gasoline.

Testing of the various engine choices shows the normally aspirated I4 galumphing from 0-60 in a tortoise-like 9.0 seconds, while the turbo-equipped Premium makes the same journey in a pretty snappy 6.6 seconds.

By virtue of the above figures, virtually all reviewers find the Verano’s standard 2.4-liter I4, despite its hefty displacement, falling short on acceleration and lagging most rivals in passing and merging reserves. The blown four-banger, on the other hand, after a somewhat leisurely first few yards, quickly and smoothly turns on the jets to a brisk getaway speed, with plenty left in the cylinders for easy merging and passing, according to reviewers. The 6-speed automatic, meantime, is noted by the majority of reviewers to perform well with either engine, with judicious use of the manual-automatic feature making for the most fuel-efficient drive. The stick-shift, available only with the turbo I4, gets panned in a few reviews as effective, but less inspiring than that found in many rivals. Finally, a few reviewers mention that, though neither engine is particularly noisy, each sounds just a bit less refined than those in similarly priced competitors.

All 2012 Verano trims sit pretty aboard a standard touring suspension with MacPherson front struts, a torsion beam rear end and a stabilizer bar in front and rear. Ride comfort is acclaimed by reviewers as among this compact sedan’s most desirable traits, with bumps and cracks handled remarkably well. The solid body construction and standard 18-inch polished alloy wheels (with all-season tires) are, according to many reviewers, extremely effective in smoothing what is often a bumpy road in most other representatives of the class.

Handling attributes, on the other hand, seem to provoke a slight difference of opinion among reviewers, with some noting an excellent balance in the electric power steering and plenty of feedback from the wheel, and others bemoaning the fact that most rivals offer a sportier ride and a more responsive feel to the wheel. A few reviews also note that the turbo-toting Premium, presently laboring under the same suspension constraints as its less-powerful siblings, could perhaps be allowed a bit more agility with a more athletically tuned suspension, and all reviewers agree that the moderate body lean prevalent in fast corners could be dealt with a bit better.

Finally, brakes in this semi-luxury sedan remain decently strong and true, with no noticeable pedal glitches. Tests of the 2013 Verano find it stopping in an average distance of 122 feet.

Finally, the brand new, turbo-equipped Verano Premium, flagship of the fleet, comes with all the endowments of the Leather plus an integrated rear spoiler.

Options-wise, lower trims can be delivered with a number of amenities found standard in the higher trims, while sport pedals and splash guards, as well as upgraded exterior trim accents and grilles, are available lineup-wide. A power sunroof is available to the Convenience and above, while a navigation display and the IntelliLink system can also be upgraded to offer Internet-based radio like Stitcher and Pandora in the Convenience and above trims.

Reviewers generally find the Verano offering at least an impression of roominess, despite its compact dimensions. The lack of available driver's memory settings is lamented by most reviewers, however, as is the fact that a power-adjustable driver’s seat is found only in the 3 highest trims. Additionally, most reviews note that the cluttered center stack presents too many buttons that look similar, while many of the abbreviations printed on these buttons tend to be confusing rather than enlightening. Finally, virtually all reviewers warn that rear-seat room will be at a premium in such a small sedan.

On a more positive note, reviewers are favorably impressed by the number of standard features aboard Buick’s downsized 4-door, while the plethora of padded surfaces, as well as a genuinely upscale feel and look to cabin materials and workmanship also resonate well. Additionally, most reviewers praise the Verano’s front seat room and comfort, while the well-wrought sound insulation is noted to lend the cabin a hushed stateliness leading to an additional impression of posh.

In keeping with its quasi-upscale market segment, the 2013 Verano lineup offers a veritable cornucopia of standard safety equipment. Four-wheel antilock brakes (ABS) include electronic brakeforce distribution and emergency braking assist and are complemented by traction and stability control. Dual front and rear side airbags, front and rear head airbags and OnStar emergency telecommunications services, collision assistance and stolen vehicle recovery assistance again come standard, as do daytime running lights, front fog/driving lights, a post-collision safety system and a remote antitheft alarm. For 2013, the Convenience and above trims are delivered with a standard blind-spot warning system with cross-traffic alert.

The National Highway Transportation Safety Administration (NHTSA) remains impressed with this compact sedan, giving it a top-shelf 5-star rating in overall safety, with 5 stars also awarded for front and side crash worthiness and a second-best 4 stars for rollover protection.

Meanwhile, the Insurance Institute for Highway Safety also remains impressed with the Verano, awarding it a Top Safety Pick for 2013 by virtue of its highest scores of Good in all tested safety criteria.

Although owners by and large think highly of their 2013 Verano selection, many still find the base engine underpowered and handling attributes not quite up to expectations. The cramped rear seat, though not unexpected, still ruffles a few feathers, while the lack of standard power-adjustable front seats in the otherwise admirably equipped Base trim leaves several others scratching their heads. Those small and often indecipherable buttons burdening the center stack again frustrate a number of owners, while some glitches in the performance of the shiftable automatic transmission are mentioned by one or two owners as well.

Most owners, on the other hand, find that the good triumphs over the bad in Buick's well-conceived compact posh-mobile. The quiet and welcoming cabin is a distinct selling point, as are the scads of standard creature comforts and techno-goodies. The new turbocharged I4 is praised for its added oomph from a stop, while the standard four-banger gains loads of kudos for slam-bang fuel economy. Once again, this little 4-door’s styling continues to draw kudos from virtually all owners, while the surprisingly capacious trunk and its more than acceptable ride comfort leads to a consensus among virtually all Verano owners that they’re getting some serious bang for their buck.

Have you driven a 2013 Buick Verano?
Rank This Car

All Electrical Gauges And Screen Shutdown

My 2013 Buick Verano is in the shop and they cannot figure out what is wrong. They cannot connect to the computer to get a code for repair. All gauges ie speedometer, gas, etc, radio, computer scre...

When I start my car it starts going through a list of things that need to be checked. It drives fine but the temperature and gas gauge wont work. The speedometer doesn't work either. Could it be a ...

Our 2013 Buick Verano with 30,000 miles started displaying a couple error messages on the dashboard display about a year ago. "Side Detection" and "Airbag Service" were a constant annoyance. My wif...

I have a 2013 Buick Verano with 135k miles, I got oil changed recently and they said the oil smelled like gas, fuel injector? How expensive will it be to fix this?